A while ago I made a family portrait of the solar system. Or rather a portrait of the leading members of the family, the eight planets: Jupiter, Saturn, Uranus, Neptune, Earth, Venus, Mars and Mercury.

But there’s more happening around the Sun. Moons for instance; our own Moon, of course, but also a large number of satellites of the four gas giants. There is an asteroid belt between the orbits of Mars and Jupiter where, besides a lot of little ones, also bigger objects are turning their rounds. But many asteroids can be found outside the main belt.

There are dwarf planets, the best known of which, Pluto and Ceres, once were considered full-fledged planets. And beyond the orbit of Pluto, in the so-called Kuiper belt, new celestial bodies are being detected all the time.

The list of objects in the solar system on Wikipedia further includes categories such as plutino, cubewano, sednoid, centaur and trojan. In short, the Solar System is far less orderly than we always thought. How do you get all those smaller family members into an image in a decent way?

For this issue, I finally found the following solution: 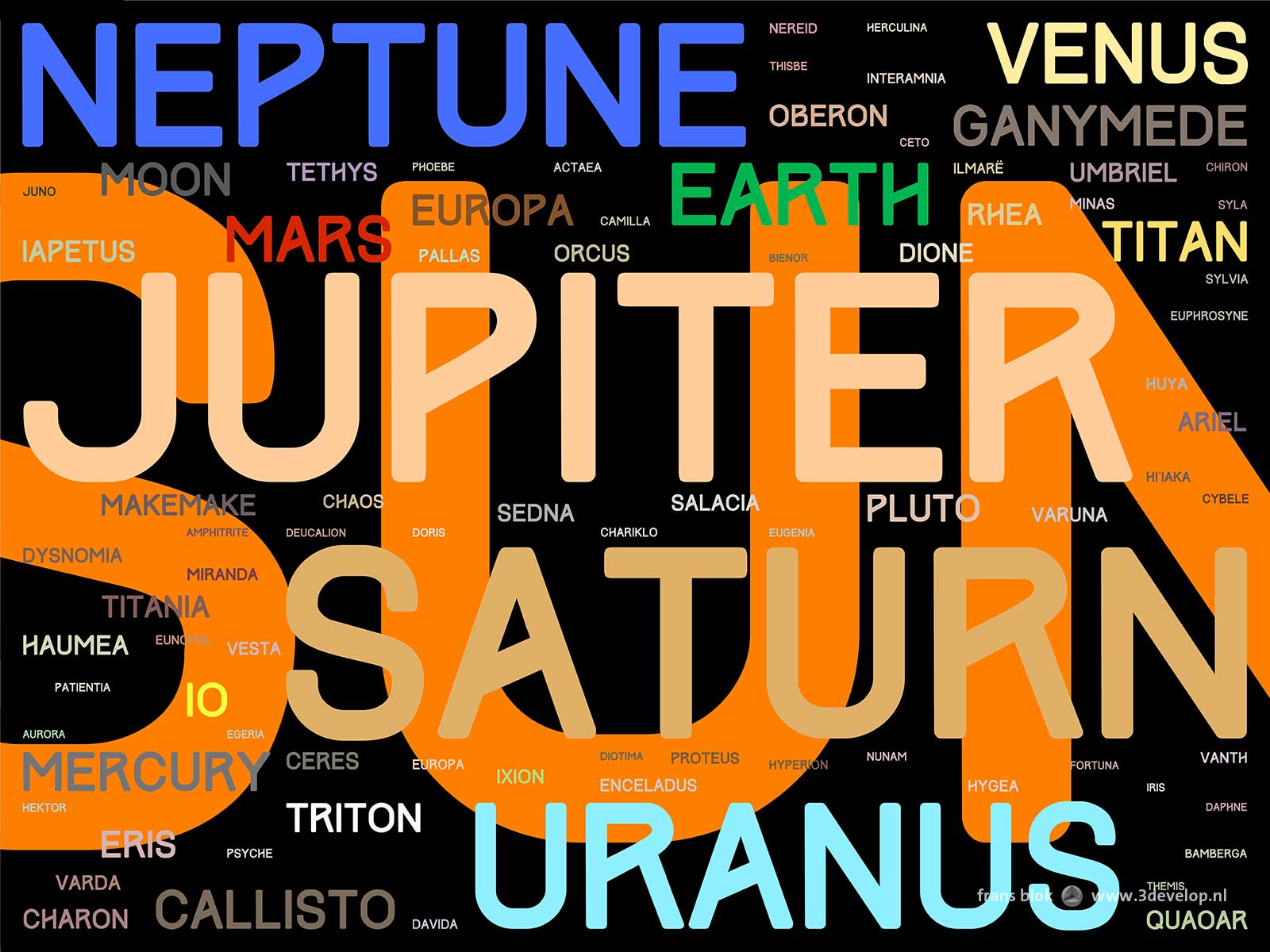 This image shows all 87 objects in the Solar System with a radius larger than a hundred kilometers. Well, at least to the extent that they have a name. Many newly discovered heavenly bodies don’t have a name (yet) but a serial number. The biggest of them, 2007OR10 even has a radius of 640 kilometers. I have considered including them but I just didn’t like it, all those numbers.

The size of the text is directly proportional to the square root of the radius of the particular celestial body. Thanks to that trick, I could keep the smallest objects readable without making Jupiter so large that you’d only see a frament of the J. Not even mentioning the materfamilias: the Sun.

Colors and shades of grey

The colors are determined more intuitively. Of course, Mars is red and the Earth is green. Neptune and Uranus also have distinctive colors, for Jupiter and Saturn, it already gets harder. For most small moons and other family members, it’s mainly fifty shades of gray.

Interestingly, the name Europa appears twice, as a moon of Jupiter and as a (much smaller) asteroid. That’s is encouraging in this age of anti-European sentiments.

We also see some common girls’ names: Iris, Daphne, Miranda and Sylvia. Many names on the list are derived from Greek and Roman mythology: Proteus, Enceladus, Vesta, Eris. But also some more exotic gods and goddesses have lend their names: Makemake, Hi’iaka and Quaoar. And even mythological characters from the books of Tolkien are represented: Varda and Ilmare.

Of course also this image is available in my webshop. I beg your pardon? On a T-shirt? Sure, that’s possible too.