Beauty can be found in unexpected places. And sometimes it takes a little effort to really see that beauty.

It started with a somewhat peculiar action of a fellow inhabitant of my apartment complex (which I recently started referring to as the 3Develop Tower). A few weeks ago this person had used the emergency stairwell to get rid of his or her Christmas tree. A little bit late, indeed; February was well on its way.

Dragging Christmas trees around is usually a good way to create a mess. As a result there were branches and needles all over the stairwell. Even more remarkable were the scattered remains of two Christmas baubles . You would expect someone to first take those off the tree. 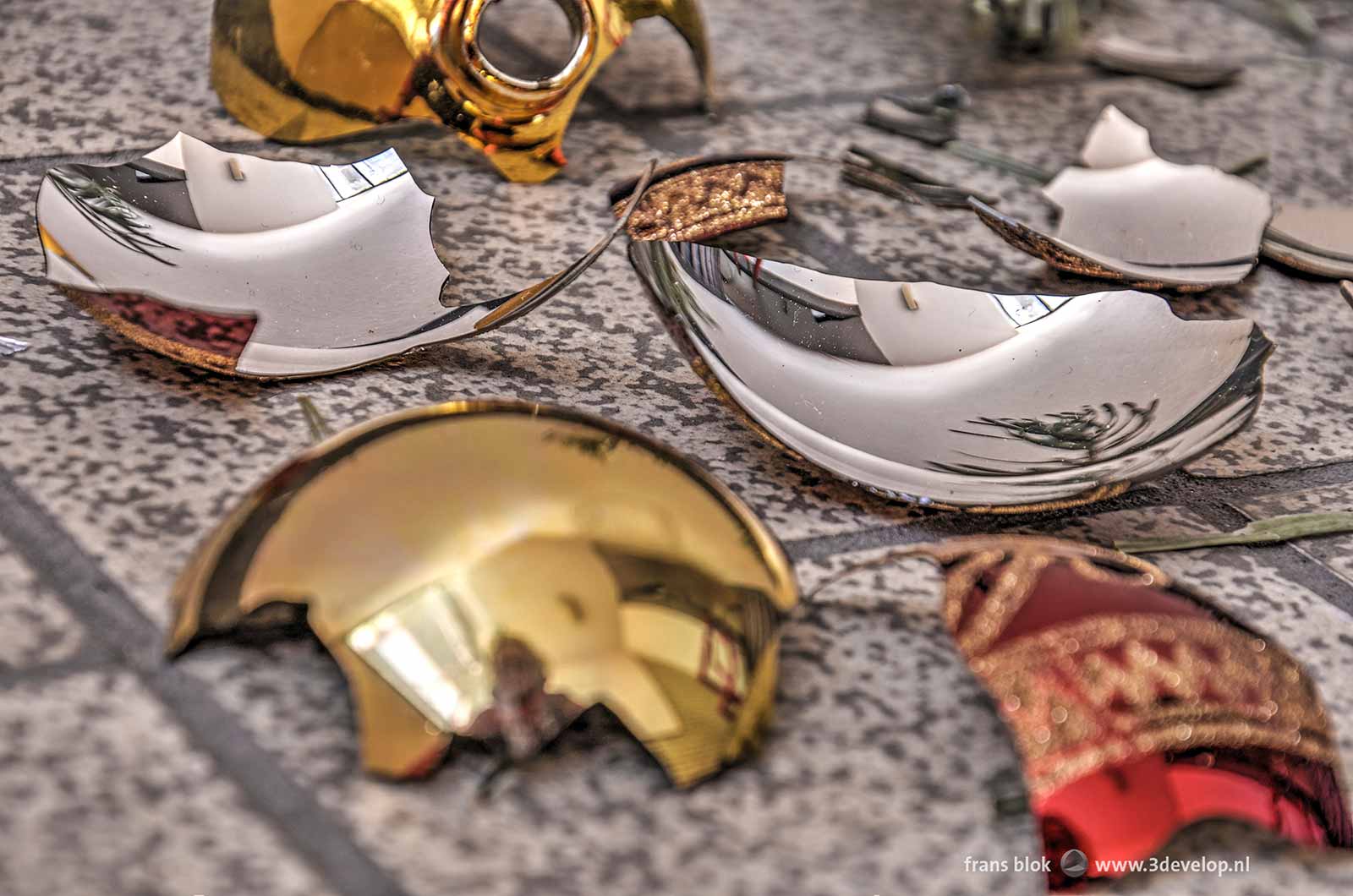 Personally, I would have taken a broom to clean up the chaos, but my mysterious neighbour apparently had not been in the mood for such an action. One can be annoyed about that, or amazed. My initial reaction was  a mixture of those two feelings.

But the next day when I went down the stairwell again, I was struck by the beauty of the scene. The play of shapes and colors, of light and reflections. The interaction of convex and concave surfaces, the combination of the gold ball and its red counterpart with a gold motif, complemented by the silver inside of both balls.

I decided  to take the pieces home and turn it into a project. An interesting side effect was that by doing this I was tidying up part of the mess.

I arranged the pieces on a mirror and made this picture: 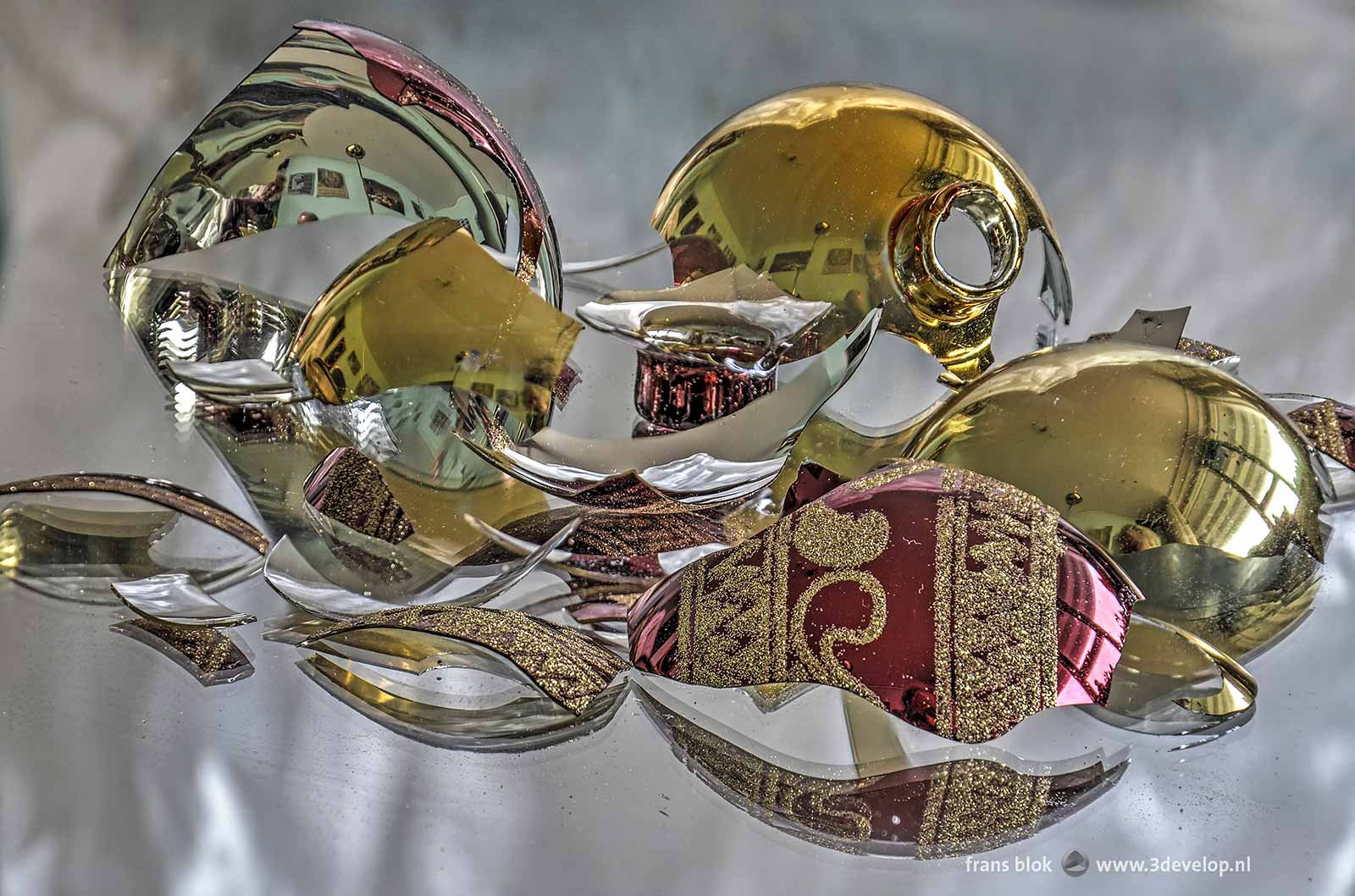 After that the project went out of control. I made nearly four hundred photographs in just a few days. Because no matter how beautiful the pictures were, I ran into three problems, or let me call them challenges.

First challenge:  it appeared to be difficult to make a still life free of dust. Although I had cleaned both the mirror and the shards as good as possible, there were still countless fluffs, threads and motes of dust on them. With the naked eye these were barely perceptible, but my camera captured them mercilessly. My solution was to decide to see such details as part of the beauty.

The second challenge was not so easy to tackle: the reflections. I liked the mirroring of the fragments on each other and on the surface underneath them, but also things further afield reflected perfectly in the shiny balls. Therefore all sorts of details from my interior were visible. And if you look closely can see  a few instances of my head in the photo above.

Again, I could have chosen to solve the issue by rethinking; seeing also those reflections as part of the beauty. But a better solution was to improvise a light box, using toilet rolls, garbage bags and an old photo frame, to hide most of my living room, and the photographer,  from view.

The third challenge: when you get so close to your subject it is hard to get the whole image in focus. It’s not really macro-photography yet, but it comes close. I therefore had to use the technique of foucs-stacking: make a combination in Photoshop of different images that are each focused on a different part of the scene. 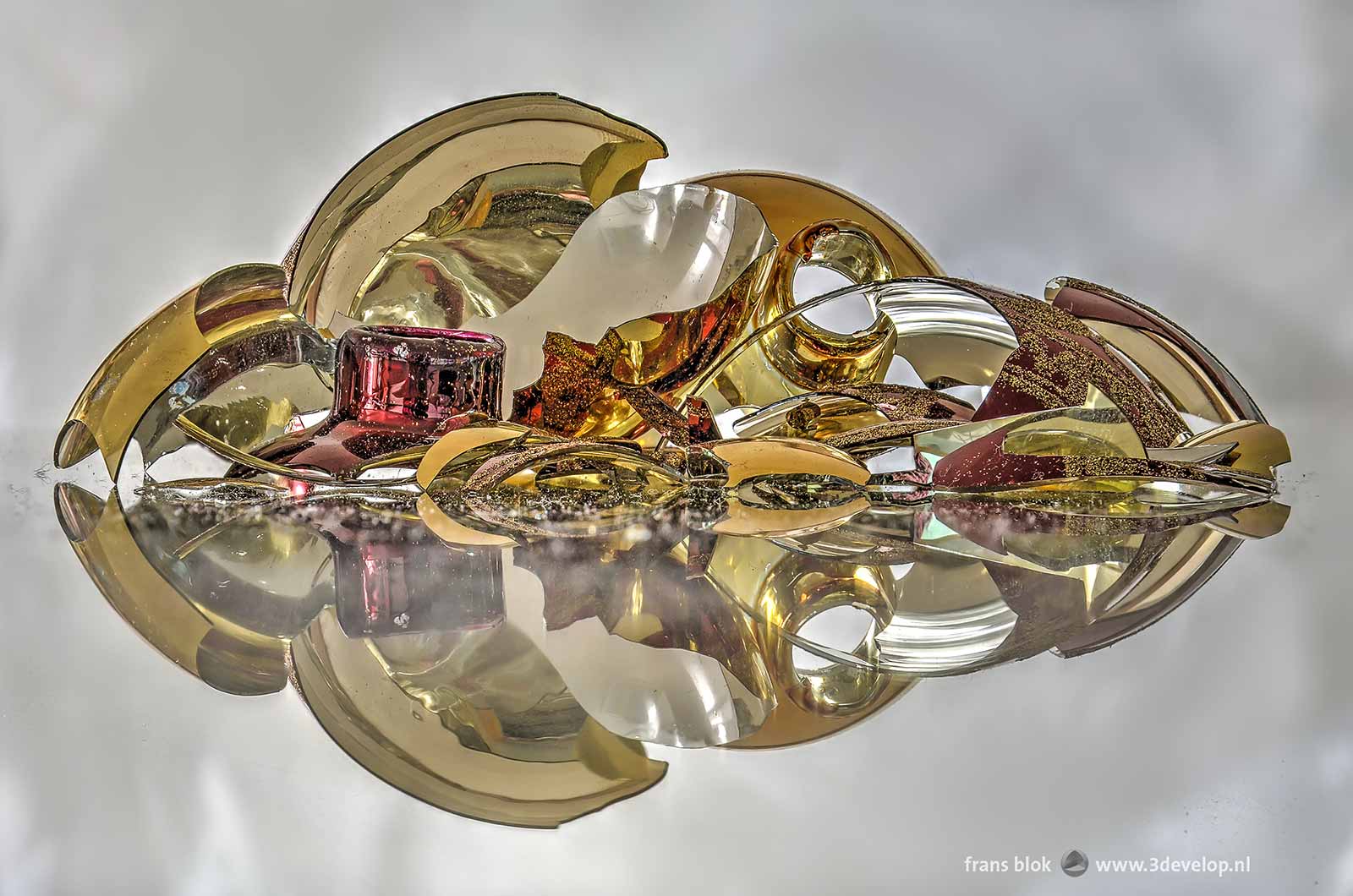