If in winter it wouldn’t become dark so early, it wouldn’t stay light on summer evenings that long. In that respect, things are distributed fairly across the globe: over an entire year there’s the same number of daylight hours everywhere. In a way, we are now saving light for later. But there is another reason for not being too sad about the short days. 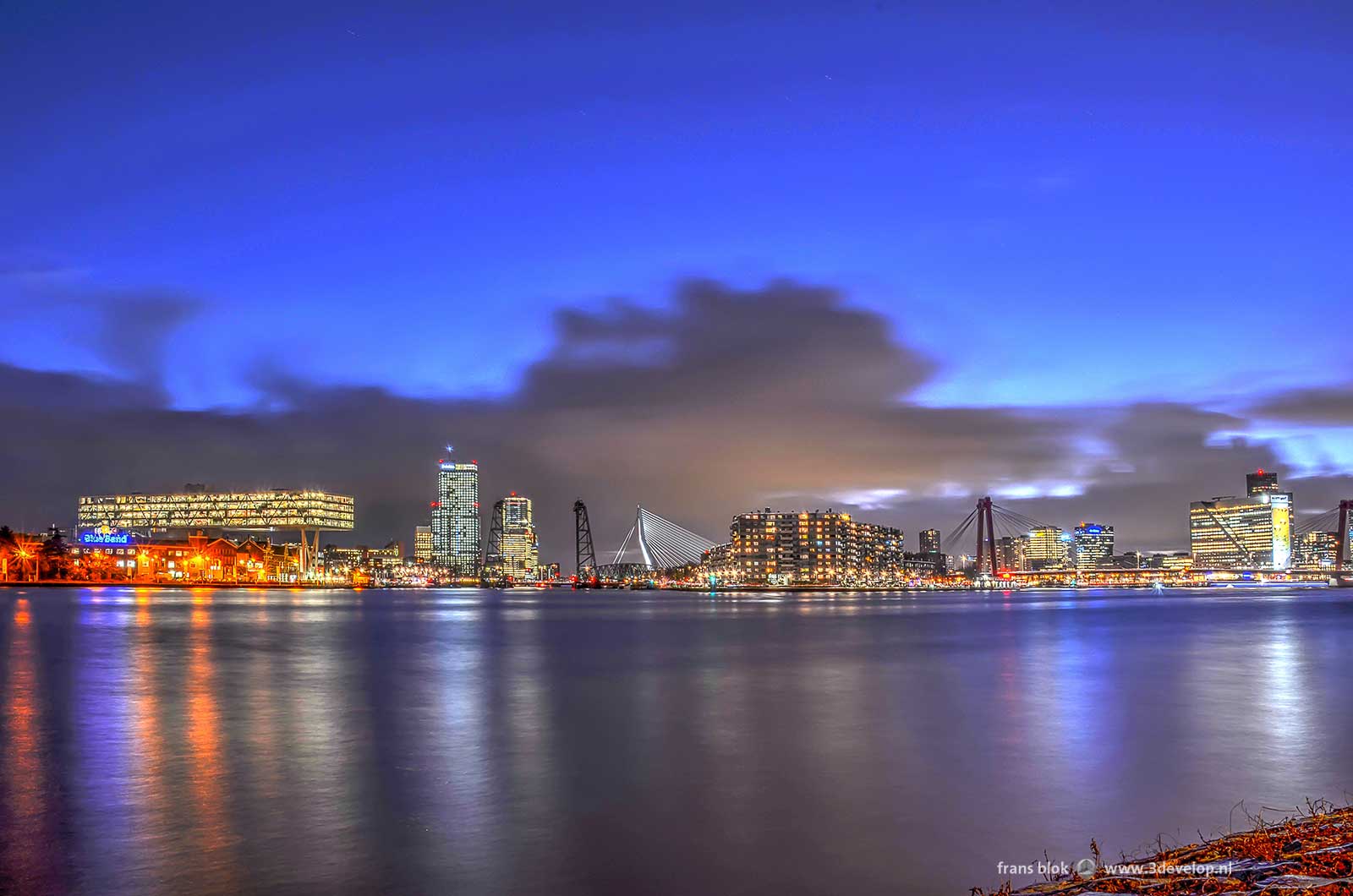 Some theory to start with

This year 21 December is the shortest day. Of course, also in that day there are 24 hours but it’s the day with the least hours of daylight.

A less known fact is that the shortest day does not coincide with the latest sunrise and the earliest sunset.

The earliest sunset is in fact on 12 December. In my hometown Rotterdam, the sun dips already below the horizon at 16.30.

The latest sunrise is two and a half weeks later, on 31 December. In Rotterdam we can see the sun rise as late as 8:49, weather permitting of course.

It all has to do with the fact that the Earth’s orbit around the Sun is not a perfect circle but an ellipse. Wikipedia explains.

Most people are not fond of those dark days. Getting up and having breakfast in the dark, coming home and having dinner in the dark; it’s depressing, isn’t it?

But for photography it’s a great time. The low sun provides much better light than in warmer seasons. And favorite moments like the golden hour and the blue hour are on much more convenient times.

On summer evenings you have wait quite long for those nice photo opportunities, not mentioning the inhumane hours you have to get out of bed must for the early variety. Nine in the morning and half past four in the afternoon, those are more pleasant times. 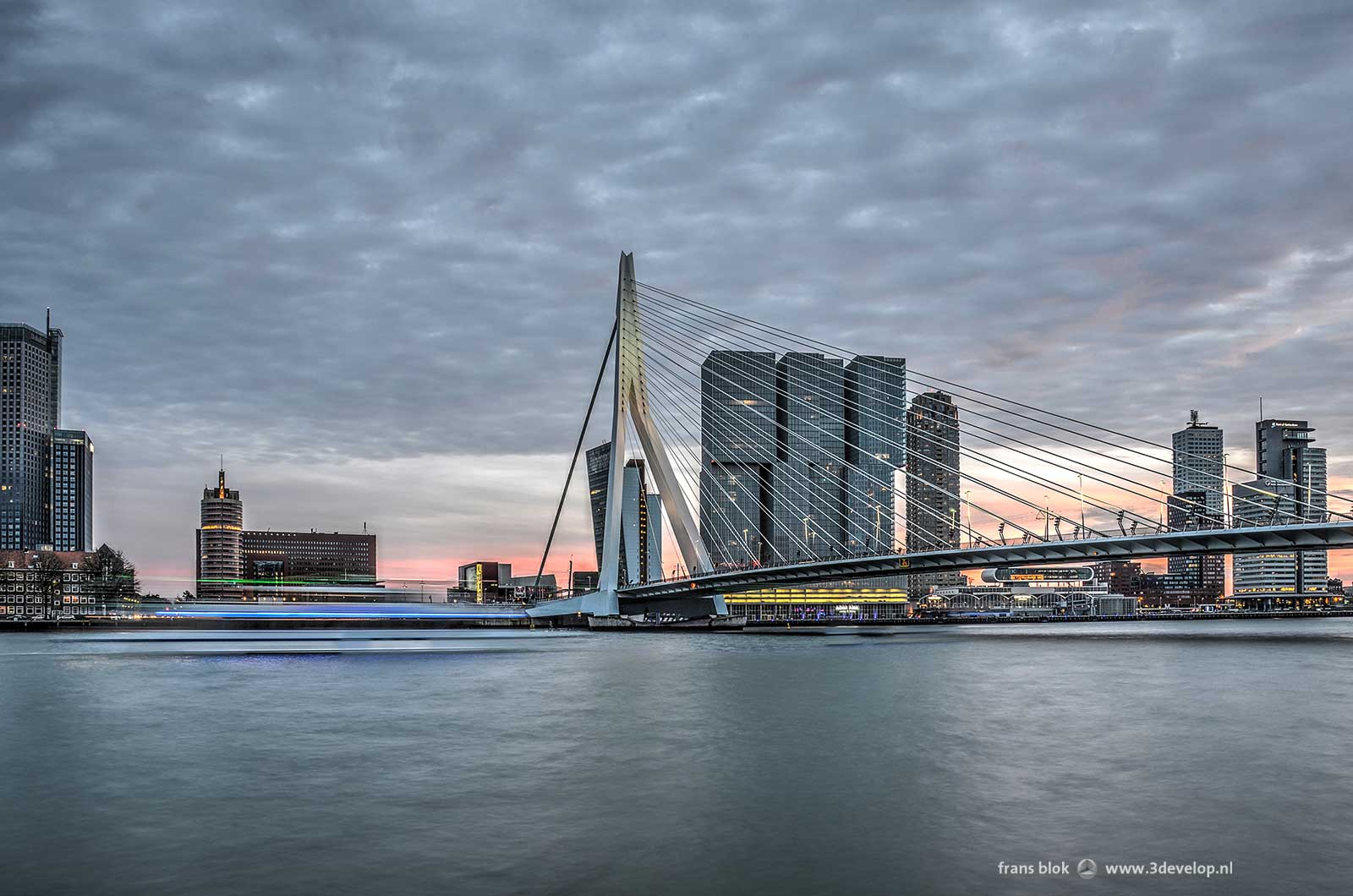 For city photographers there’s another advantage. In summer, office buildings are usually dark around sunrise and sunset, but in winter at those times the lights are already, or still, on. And of course there’s the Christmas lights.

So in these dark days I often go into the city with my Nikon D5100 around four PM. (I must admit that even now my attempts in the morning are less successful).

I usually use a small aperture (high f-number) for the purpose of a large depth of field. And an ISO value of 100 to get the least possible noise on my pictures. The exposure time is variable and, of course, is rapidly increasing as it becomes darker.

To make things more complicated, I usually take three photos with different exposure times, to merge these into an HDR image using the program Photomatix. But more about that soon in another article.

Hand-held shooting, when it gets dark, is no longer possible. Yet I rarely take a tripod with me. The city is full of walls, boxes, benches, bollards, railings, ledges, trash cans and quay edges that form a stable platform for my camera. And with the two-second self-timer, I avoid any vibration that can result in blurry photos.

The light show actually starts an hour before sunset. Artificial light is still nowhere in sight, but the low sun already creates a special atmosphere: 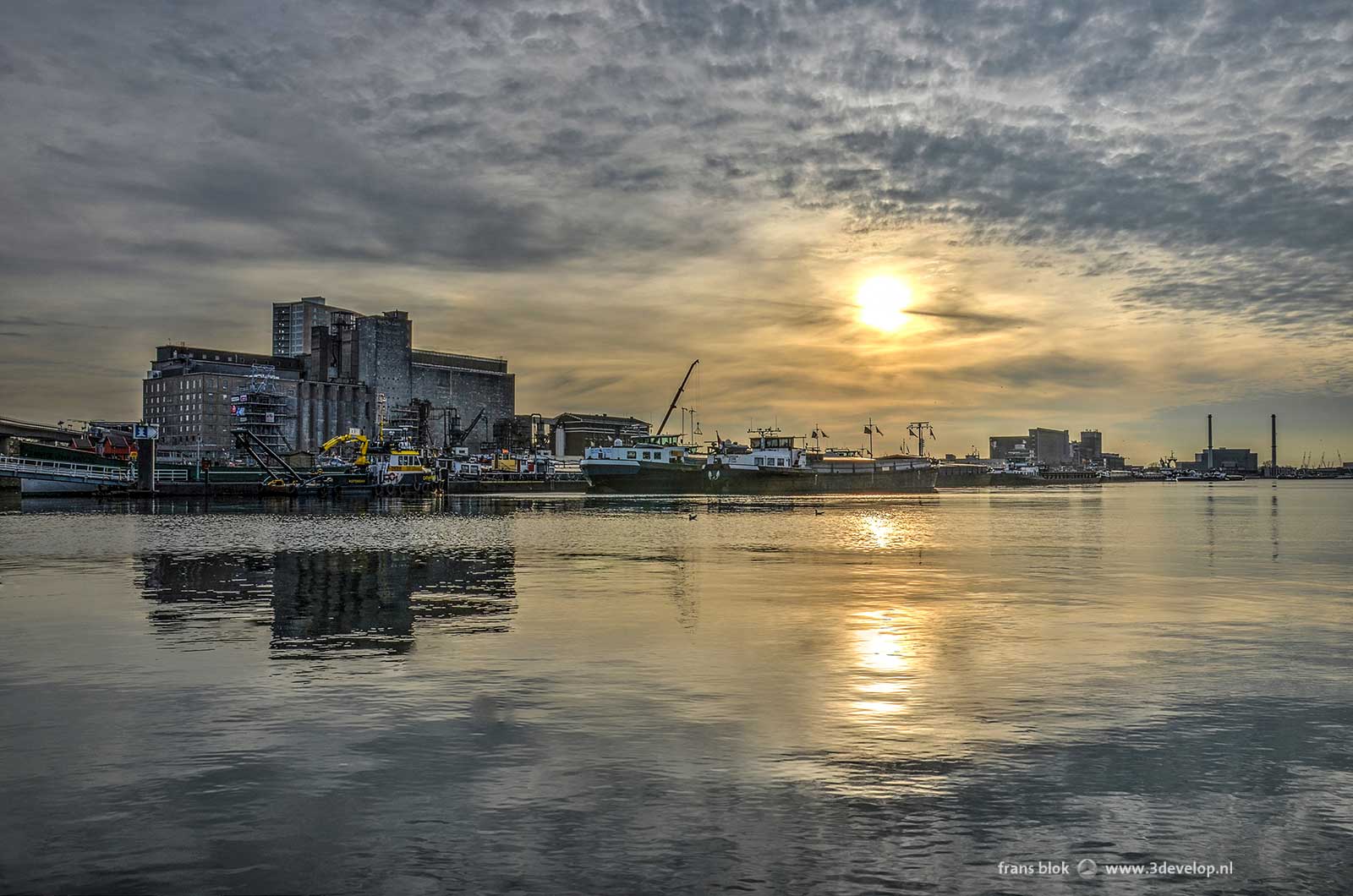 If you’re lucky with the weather, the sky now starts to change color: a mix of red, yellow, blue, white and gray and all adjacent shades. Indoors the first lights go on. Or maybe they were already on but they are beginning to become noticable: 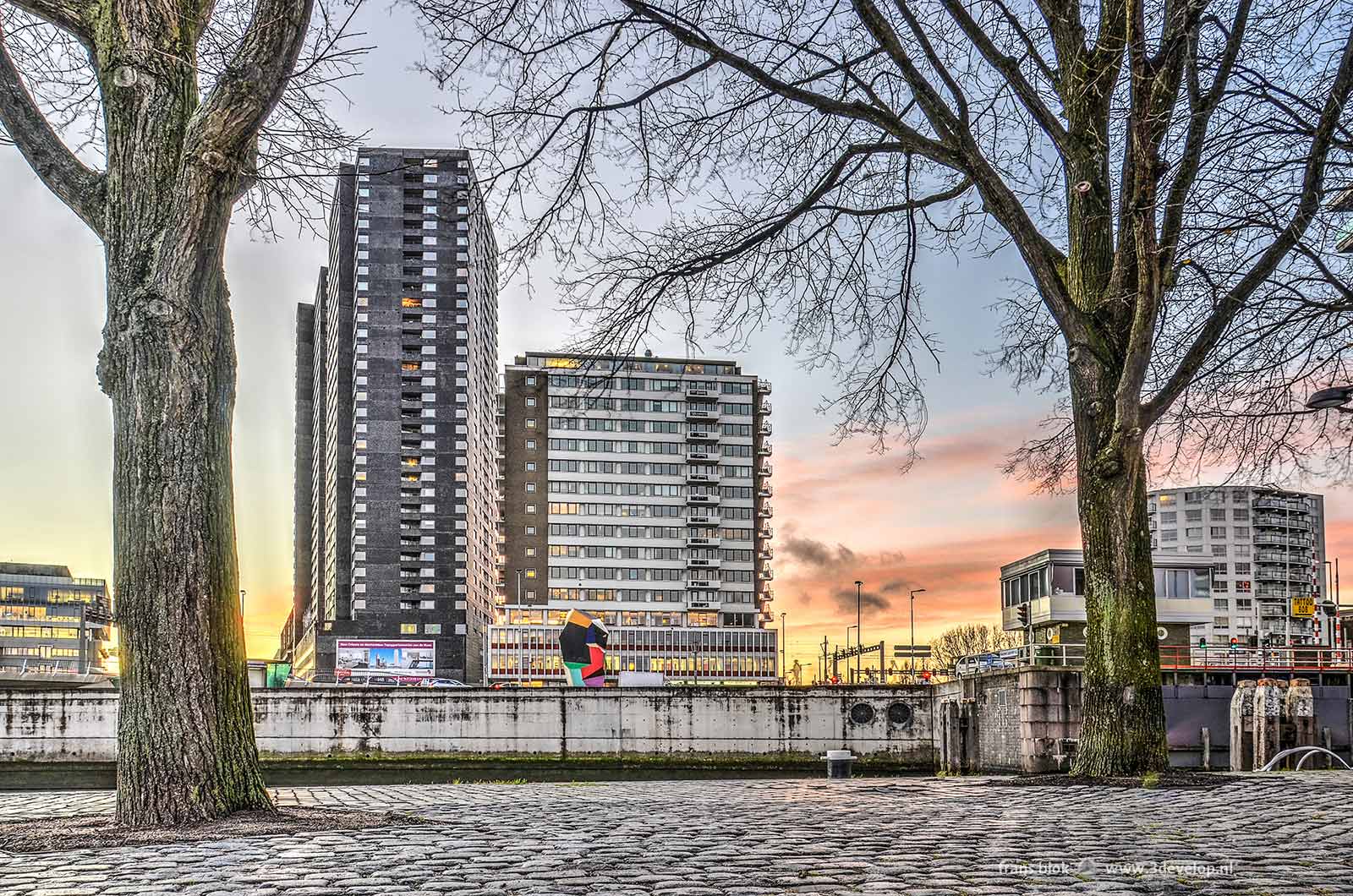 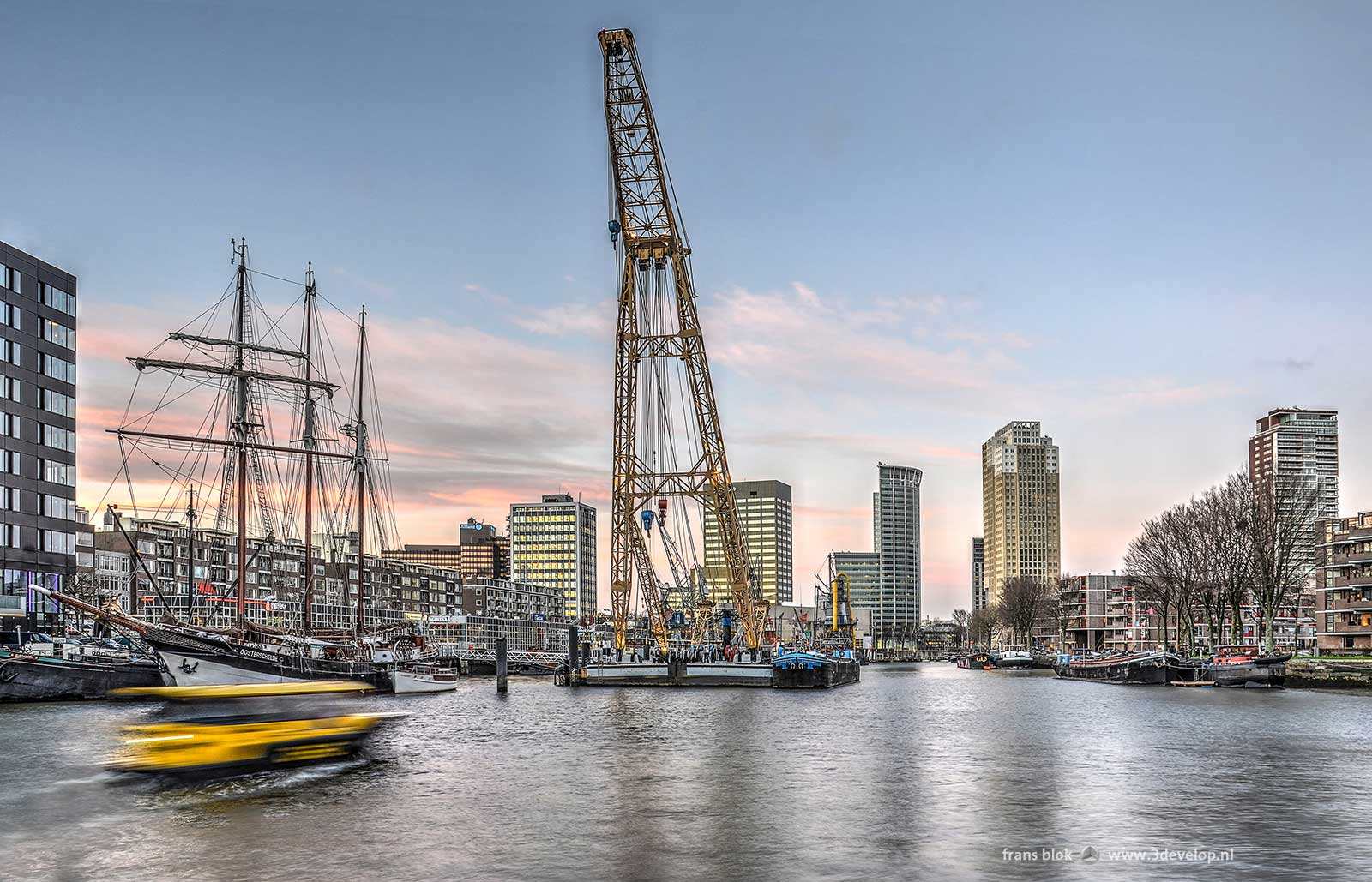 While the artificial light becomes stronger, the daylight becomes weaker. The atmosphere changes with every passing minute: 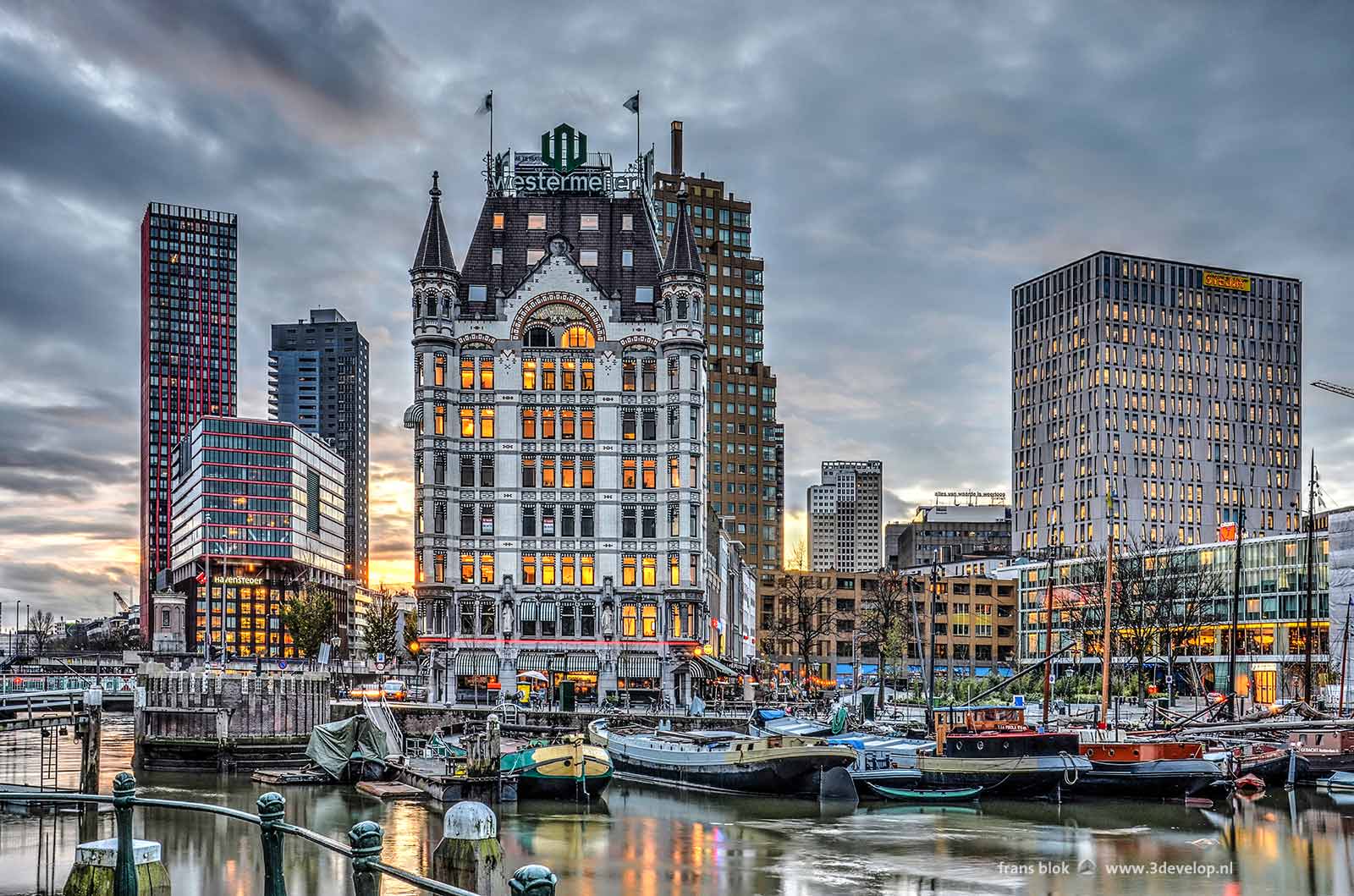 Street lights and neon signs go to; spotlights on buildings begin stand out: 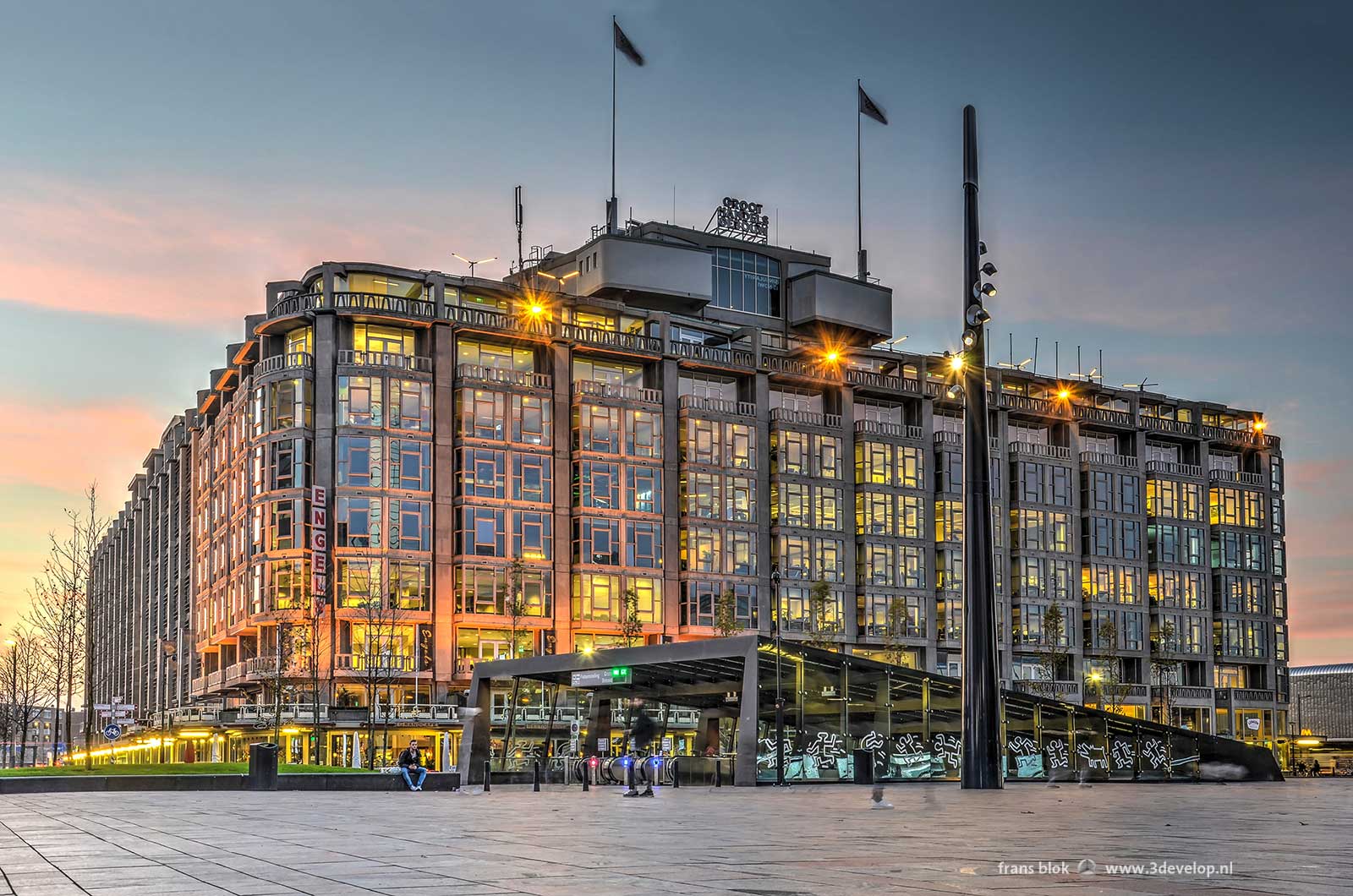 When the sun is behind the horizon the sky gets a dark blue color. The exposure times have become so long that cars cause light streaks: 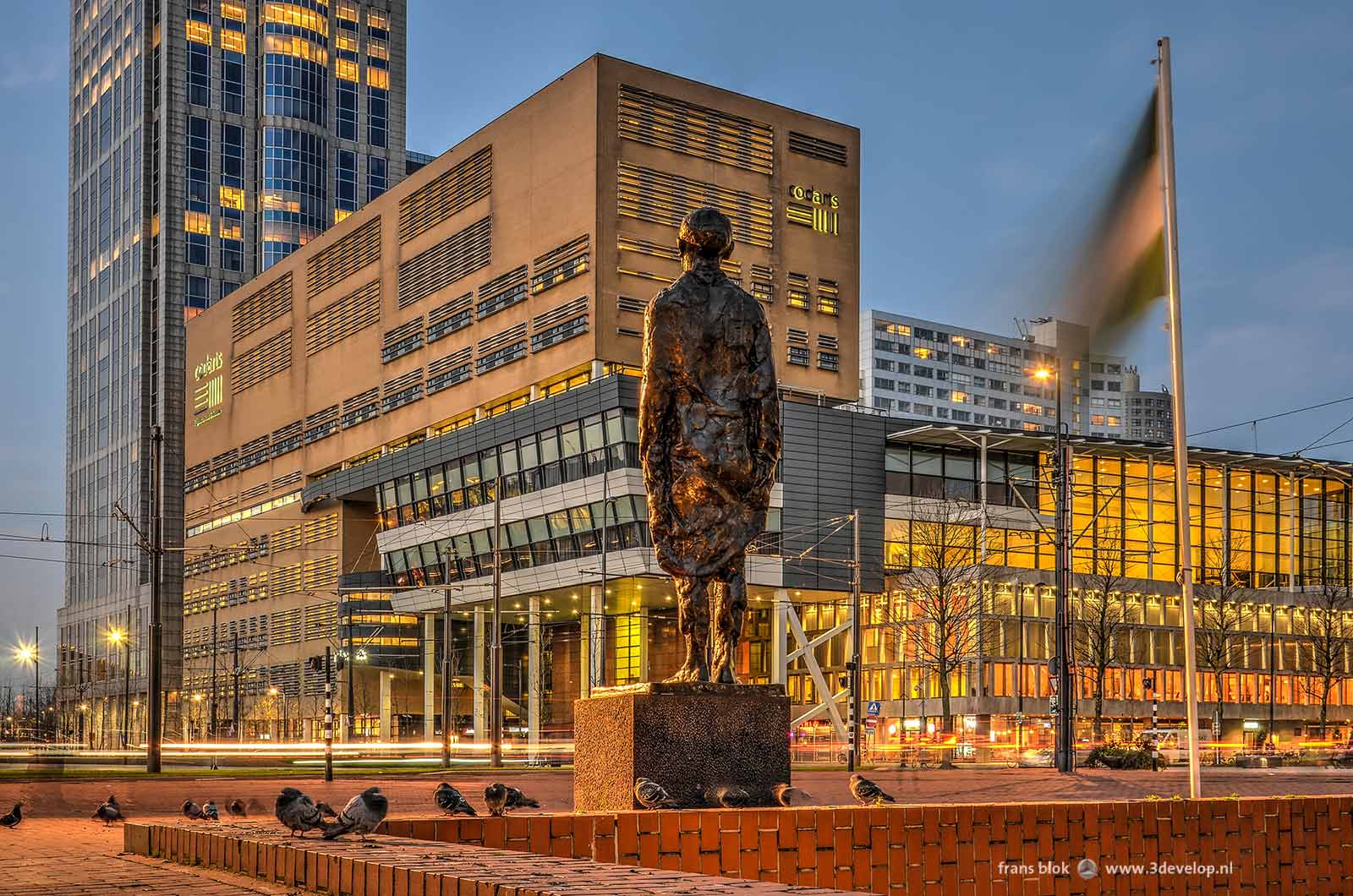 Water surfaces are getting a surreal fuzziness. To the human eye, it starts to get dark but for a camera, there is still enough light to see colors and textures of buildings: Buildings and lights reflect in wet surfaces. The exposure times are so long that people are no longer visible on the photo, which gives an sense of alienation: 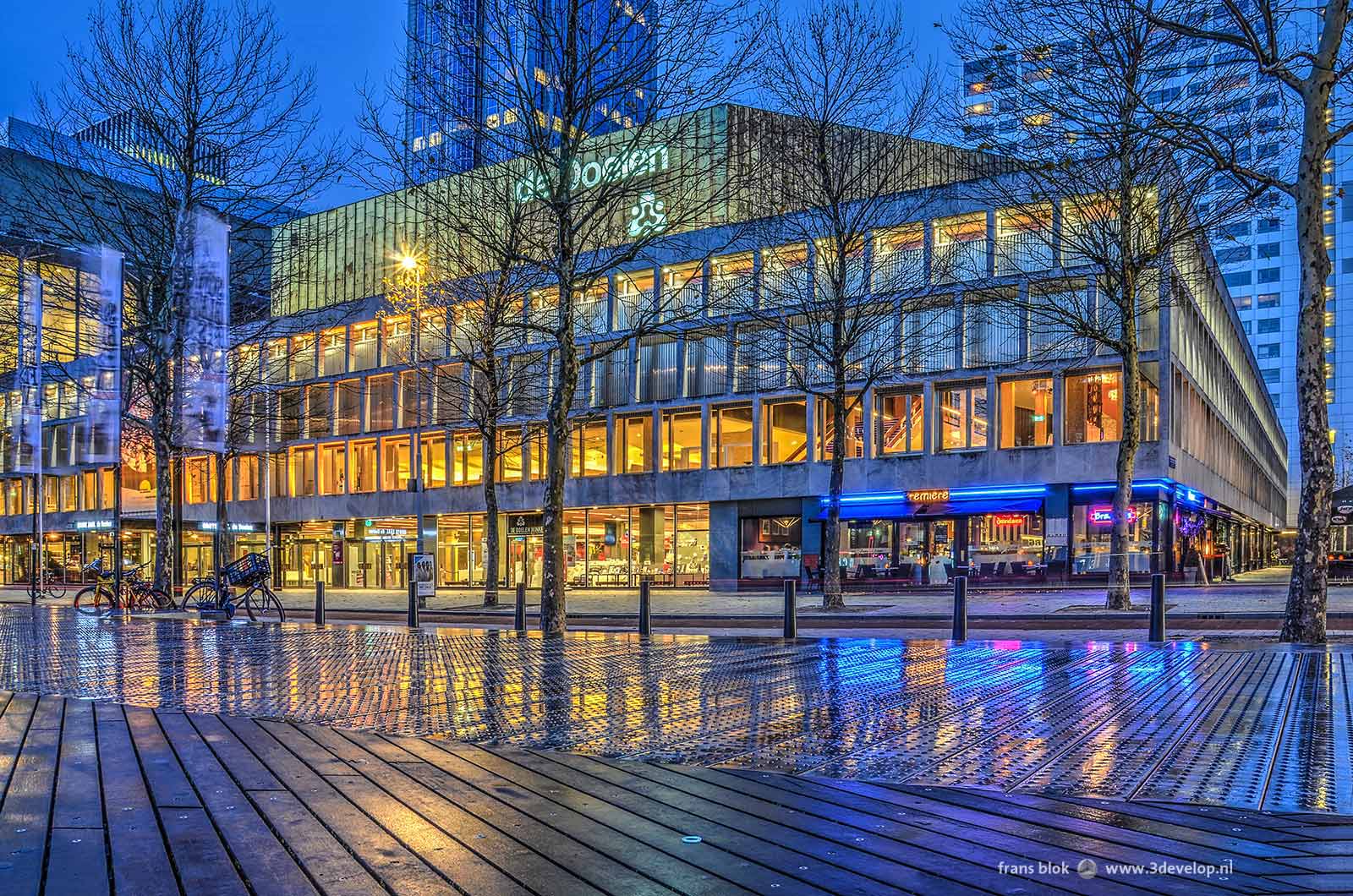 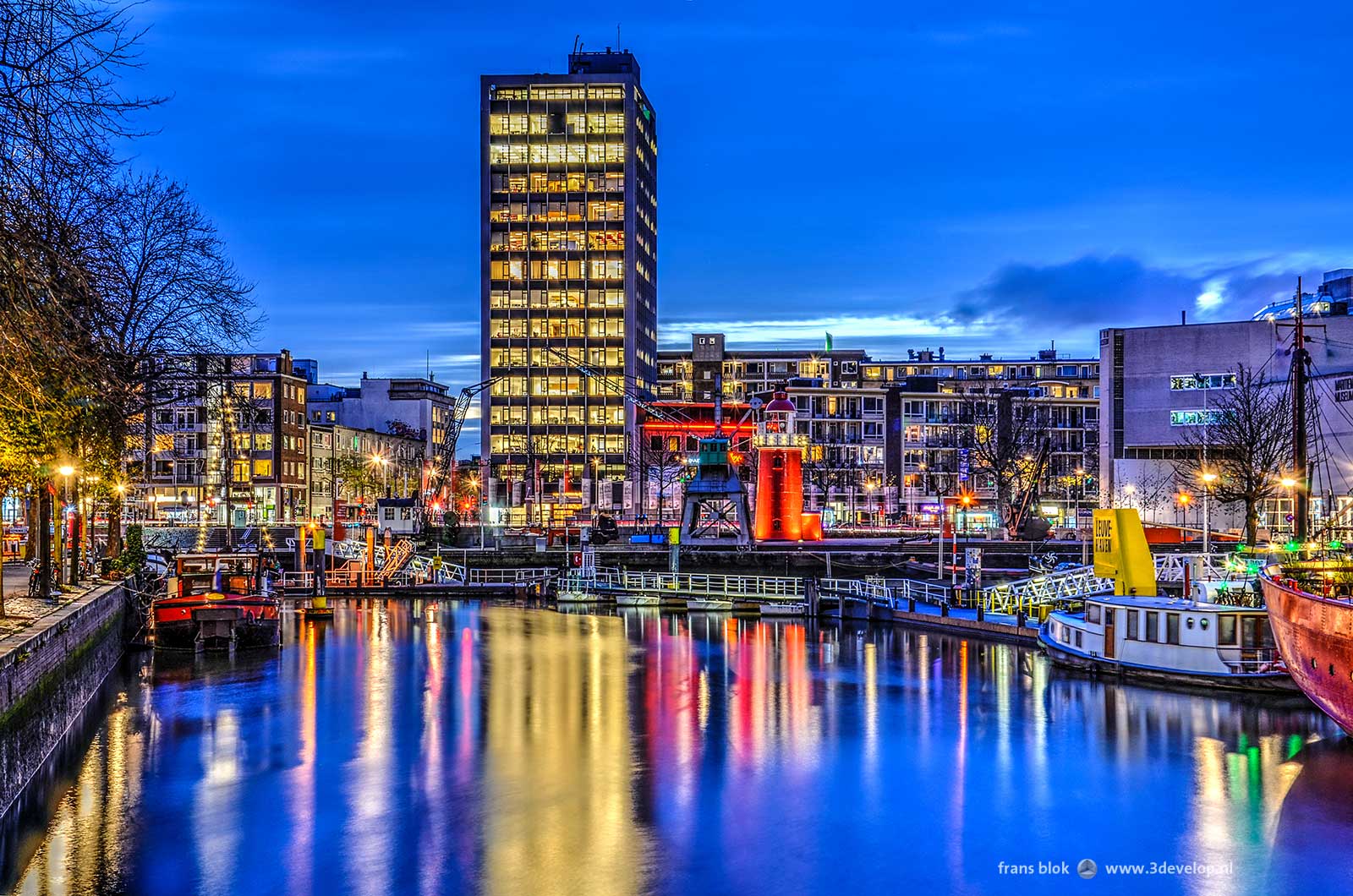 Sometimes, when it is almost completely dark, something unexpected happens. The photo below was taken on a night when it was mostly cloudy. The sunset was therefore not too spectacular. But then far above the North Sea a hole in the clouds appeared through which the Sun squeezed some last rays. That put the city in an almost magic light: 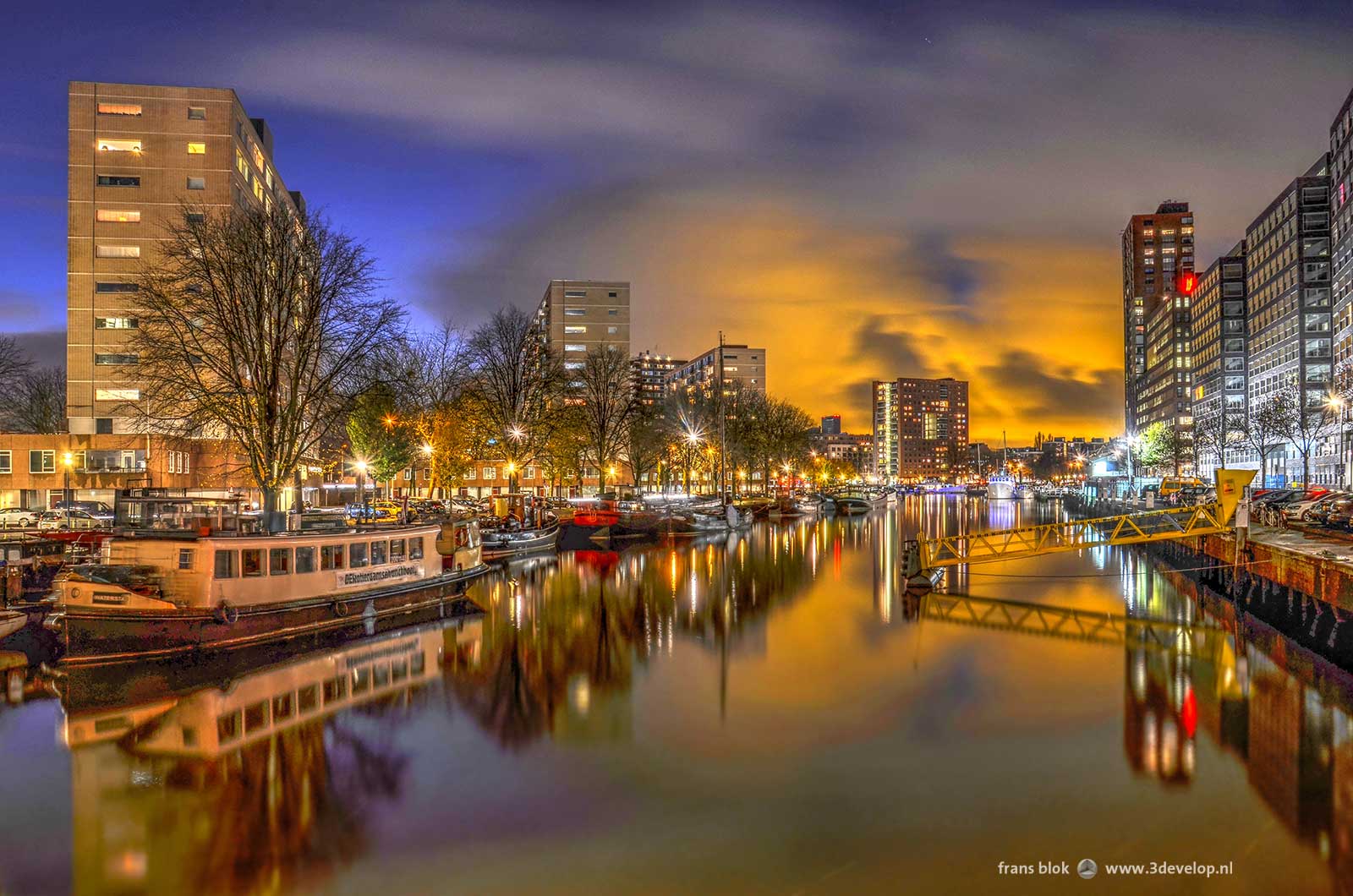 In the coming weeks the good times will continue for a while. In the afternoon the sun cautiously started to go back on its path; in the morning you can almost sleep in and still be in time for the blue and golden hour. I think I’ll once again try to set my alarm a little earlier the next week.