In 2002, my former employer Rem Koolhaas designed a flag for the European Union. His idea: a kind of bar code with the colors of the flags of the various member states arranged from east to west. One of the places where the design was used is the Museumpark in Rotterdam.

A brilliant idea, in my opinion: it symbolizes variety and unity and it is immediately recognizable. The flag may only be a bit hard to draw without errors, but that’s true for many flags. (How are the American stars arranged? And did we start with a red or a white stripe?)

Unfortunately, the Barcode was never introduced by the European Union as the official flag, so we are still stuck with the uninspiring blue flag with twelve golden stars. (Twelve? Why on earth twelve?)

The tricky part of the Barcode design is that, when new countries continue to join, the lines will become very thin. The original flag was made in 2002 from the then fifteen Member States; meanwhile, the Union has 28 members, nearly twice as many. 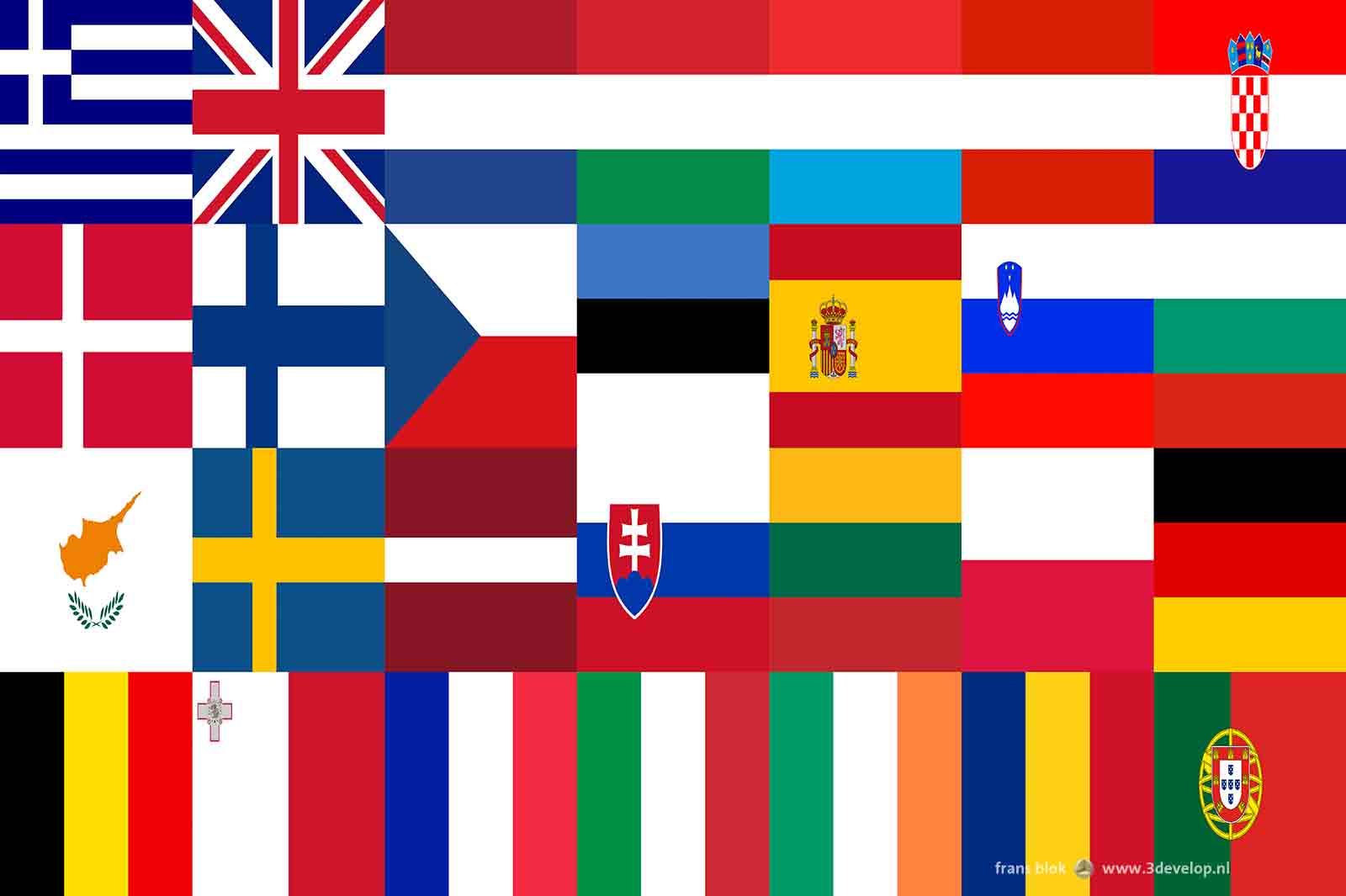 I tried to arrange the flags in such a way that they were starting to “interact with one another”. Endless shuffling led to the arrangement above with, from left to right and from top to bottom the flags of Greece, Great Britain, the Netherlands, Hungary, Luxembourg, Austria, Croatia, Denmark, Finland, Czech Republic, Estonia, Spain, Slovenia Bulgaria, Cyprus, Sweden, Latvia, Slovakia, Lithuania, Poland, Germany, Belgium, Malta, France, Italy, Ireland, Romania and Portugal.

Note, for example, the horizontal white path that connects the upper flags. Or the white space created by the flags of Estonia and Slovakia placed above each other. Or the diagonal from the Union Jack which continues in the Czech triangle.

Still, it’s more difficult than I expected to forge the 28 flags together into an abstract design. That is partly because of the many color differences between the different flags: the red of Denmark is not that of Germany, not to mention the red of Estonia. Koolhaas solved that problem by limiting the number of colors.

It’s also remarkable that even the crosses on the Scandinavian flags have different dimensions.

But the biggest problem is that some flags are more recognizable than others. It’s fairly simple to merge flags with three horizontal or vertical bands into an abstract pattern. But the flags of Greece, Britain and the Scandinavian countries still stand out. The little blazon in the flags of, for instance, Spain and Portugal and in particular the map of of Cyprus keep attracting attention. About that last issue something can be done: 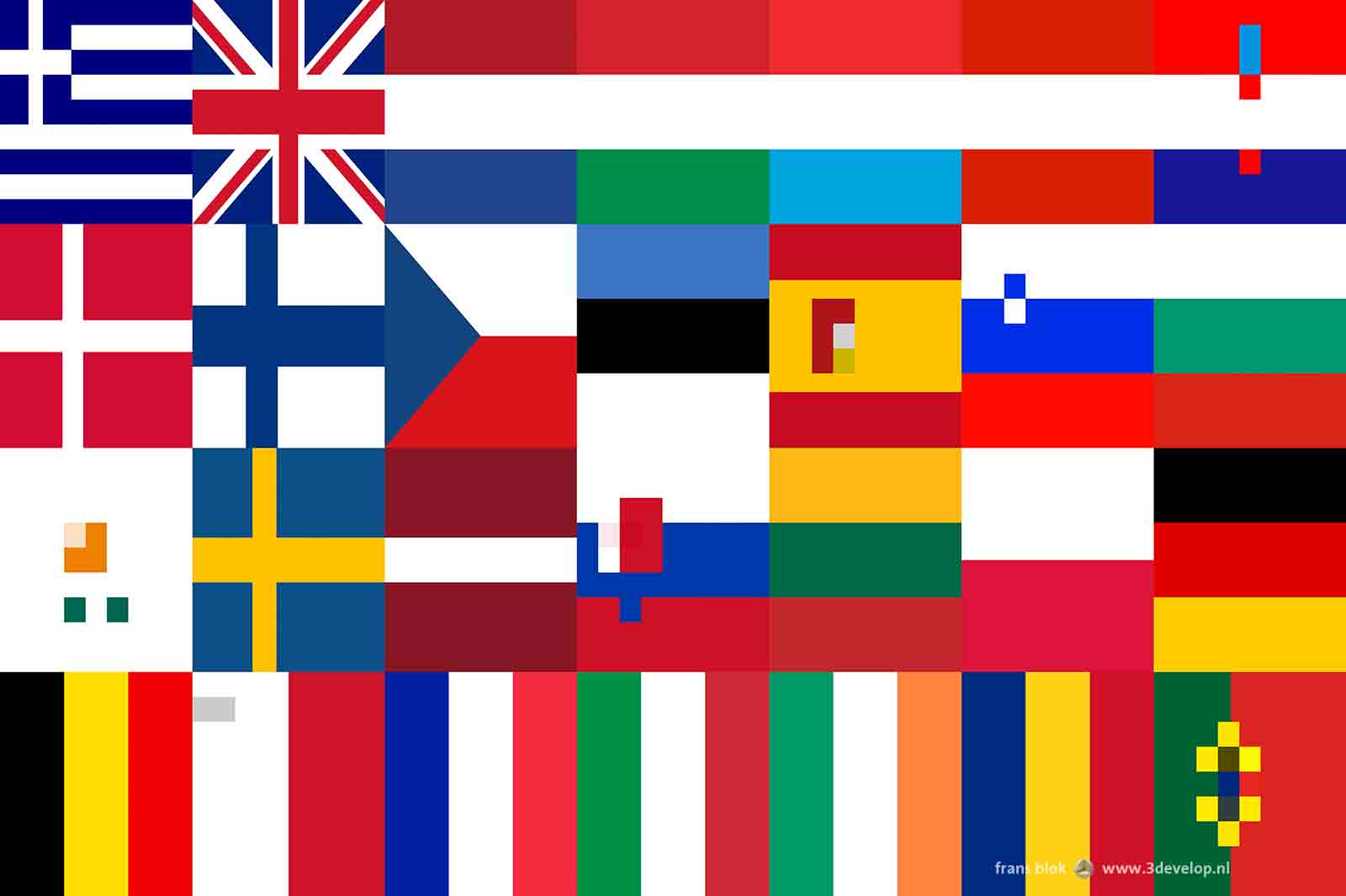 Adobe to the rescue 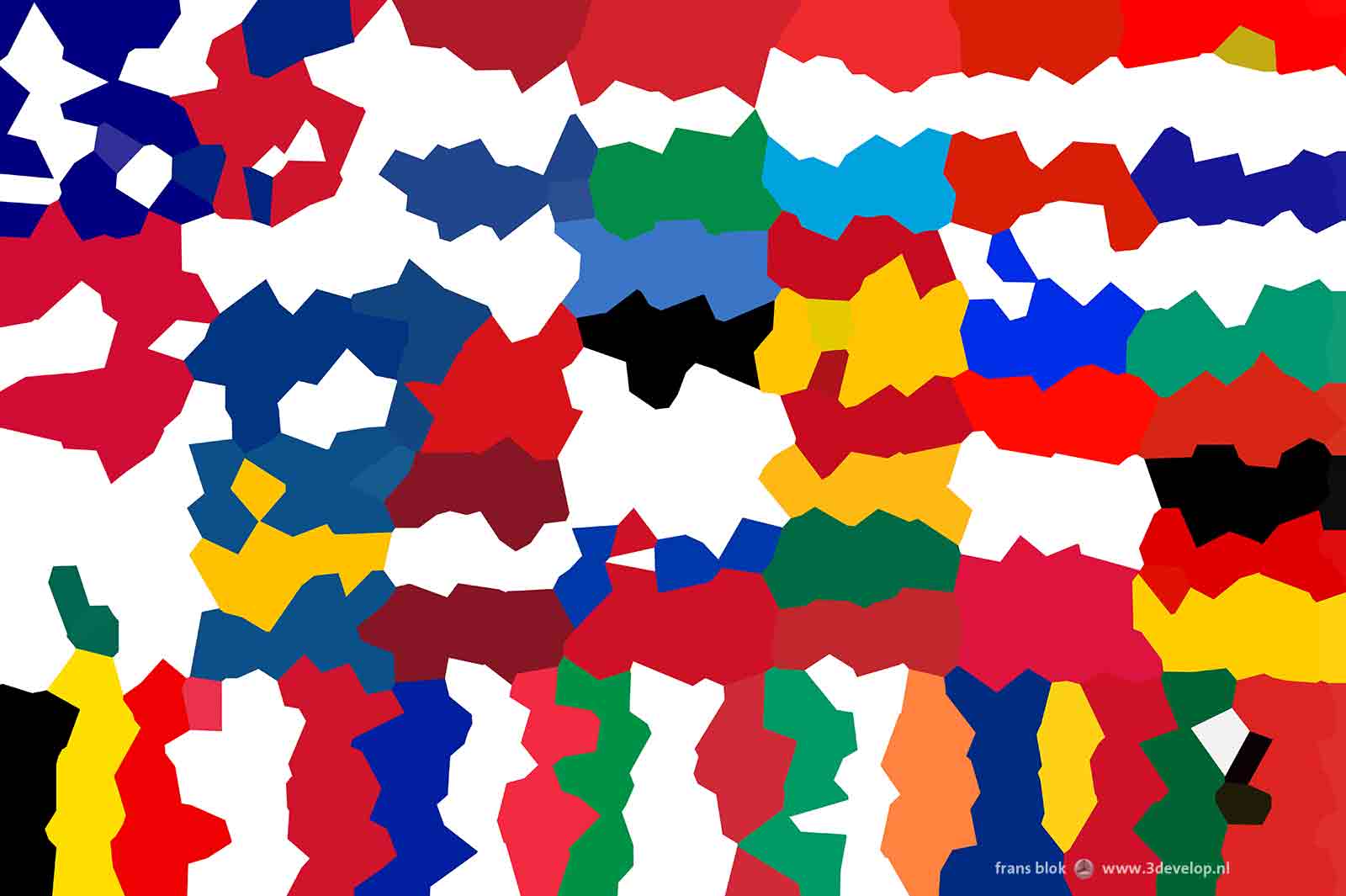 And there we have our desired symbol of European unity in diversity. But unfortunately, very difficult to draw. Okay, let’s stick to Koolhaas’ Barcode.

So my search has not provided a new flag for the European Union. But at least it resulted in some works to hang on the wall. I particularly like this relief version: 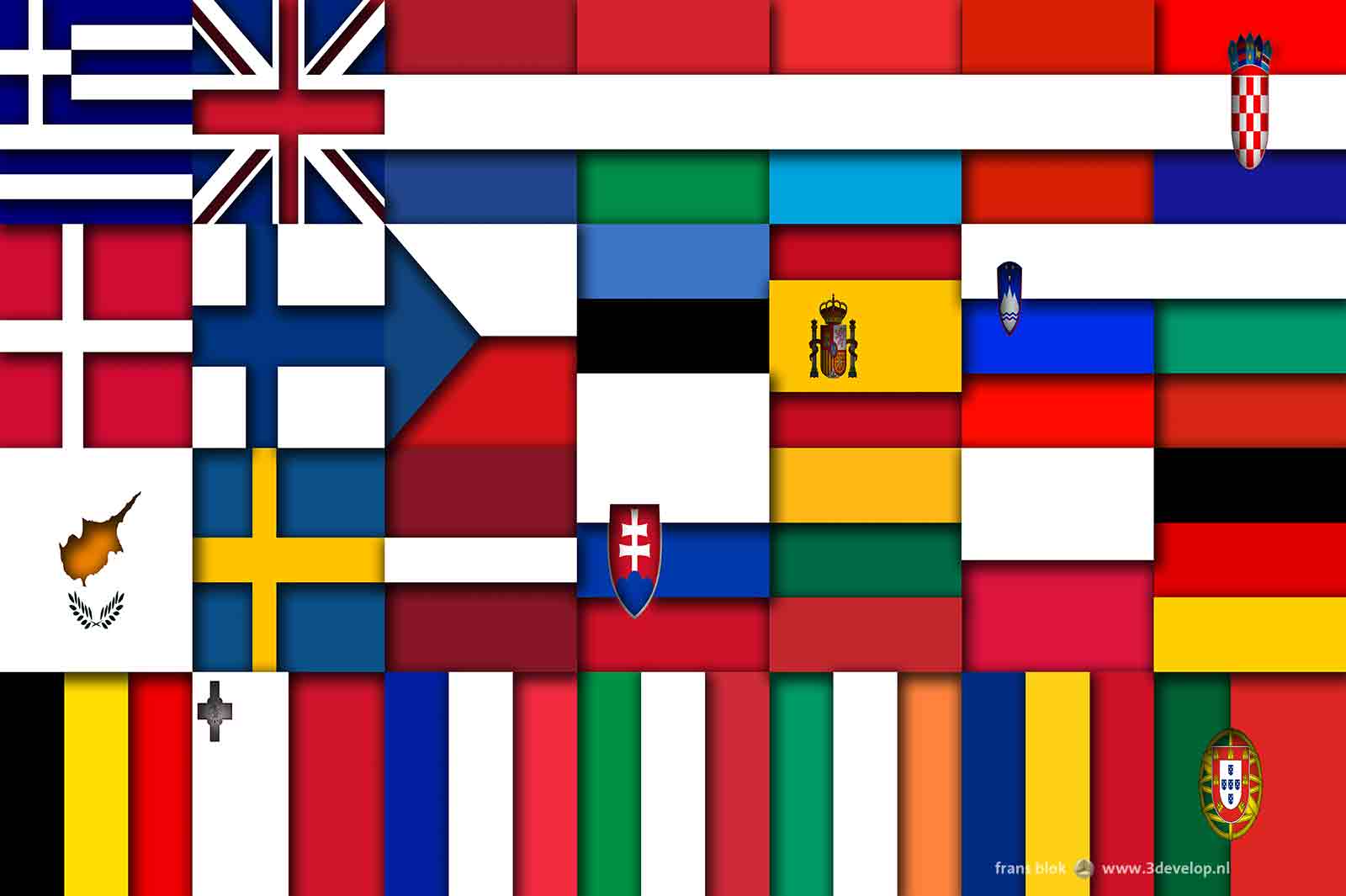 Everything changes, of course, when a new member state is added, or if a country leaves the Union. It will be clear that I’m not looking forward to a Grexit or Brexit.

UPDATE: On June 23, 2016, it happened: the British chose to leave the European Union. Well, 52 percent the British did; the other 48 percent are not overly enthousiastic about the Brexit, to put it mildly.

The fact that my flags composition has been made obsolete with one stroke of the pencil, is perhaps the least dramatic effect of the British EU referendum. But still: the design must of course be adapted to the new situation. One of the possible scenarios is that Scotland remains a member of the European Union. In that case, things are easy; after all, the Scottish flag is in the Union Jack; I’d just have to take the rest out. I will keep a close watch on developments in the next few months….