The Maassilo on the Brielselaan is one of the coolest buildings in Rotterdam. As a child I was already fascinated by the huge concrete block that you could almost touch when traveling to the city center with the metro.

When this summer a competition was organized to design a skybox on the tenth floor and comu up with an idea for the roof of the Maassilo, I didn’t need to hesitate to join. The same was true for about sixty other designers and design teams from Rotterdam and wide surroundings. 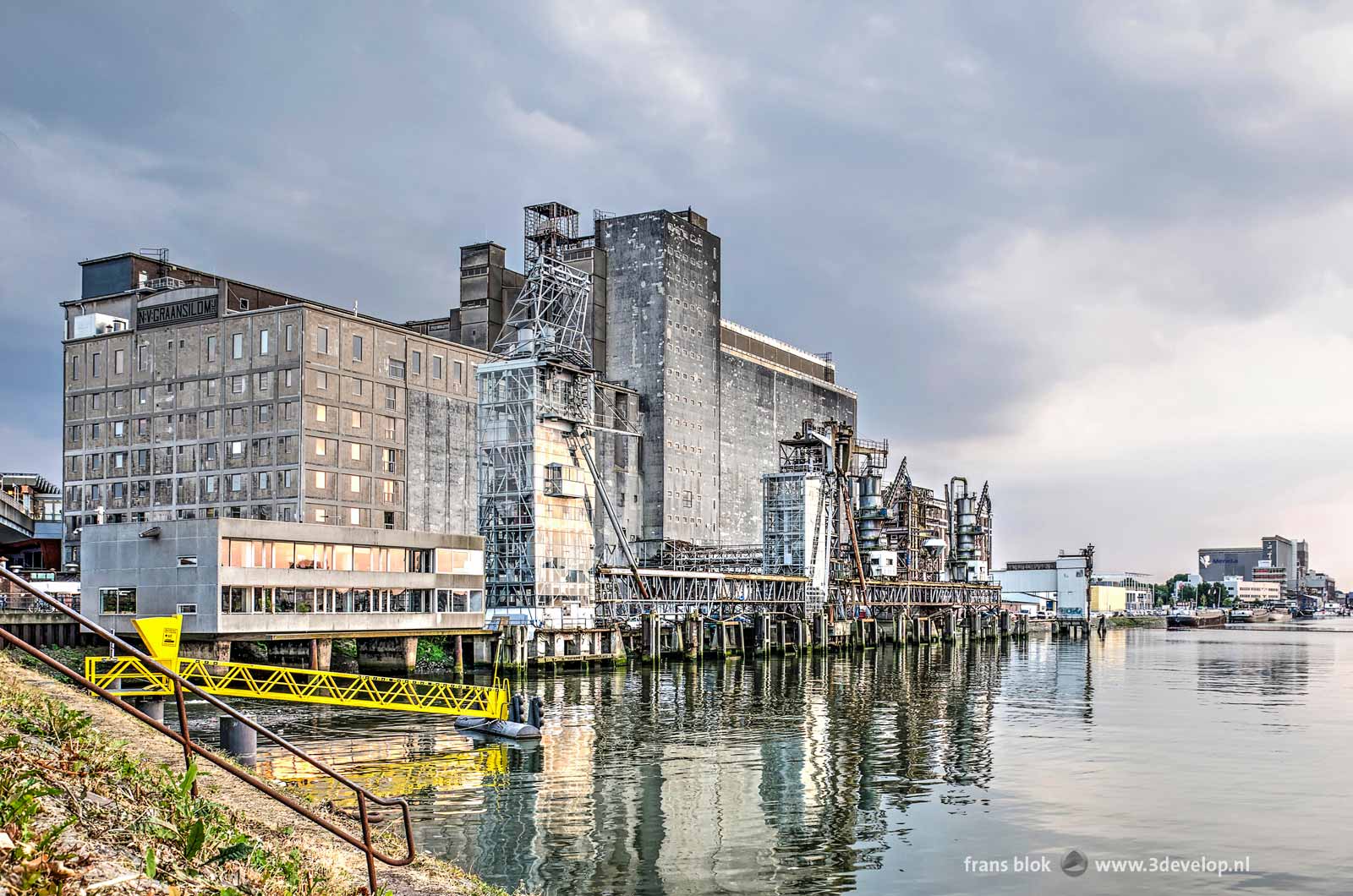 A nice side effect of the competition was that I got to know more about the history of the building. For example, I found out that the Maassilo was in fact not one single building. The complex was designed by three different architects in three different eras.

The first part, in the armpit of the Maashaven and the metro track, dates from 1910 and was designed by architect J.P. Stok. The second, slightly taller part to the west of it, dates from 1930 and is by Brinkman and van der Vlugt, also the designers of the Van Nelle factory. Architect J.D. Postma was responsible for the third part in 1951, an elongated building volume between the two older parts and the Brielselaan.

Since 2003, the building is no longer operating as a grain silo. Parts of it were taken into use as a collection building for creative start-ups(the Creative Factory) and as a venue for entertainment and events (including the discotheque Now & Wow). Still only a small part of the gigantic structure is has been “colonized”. 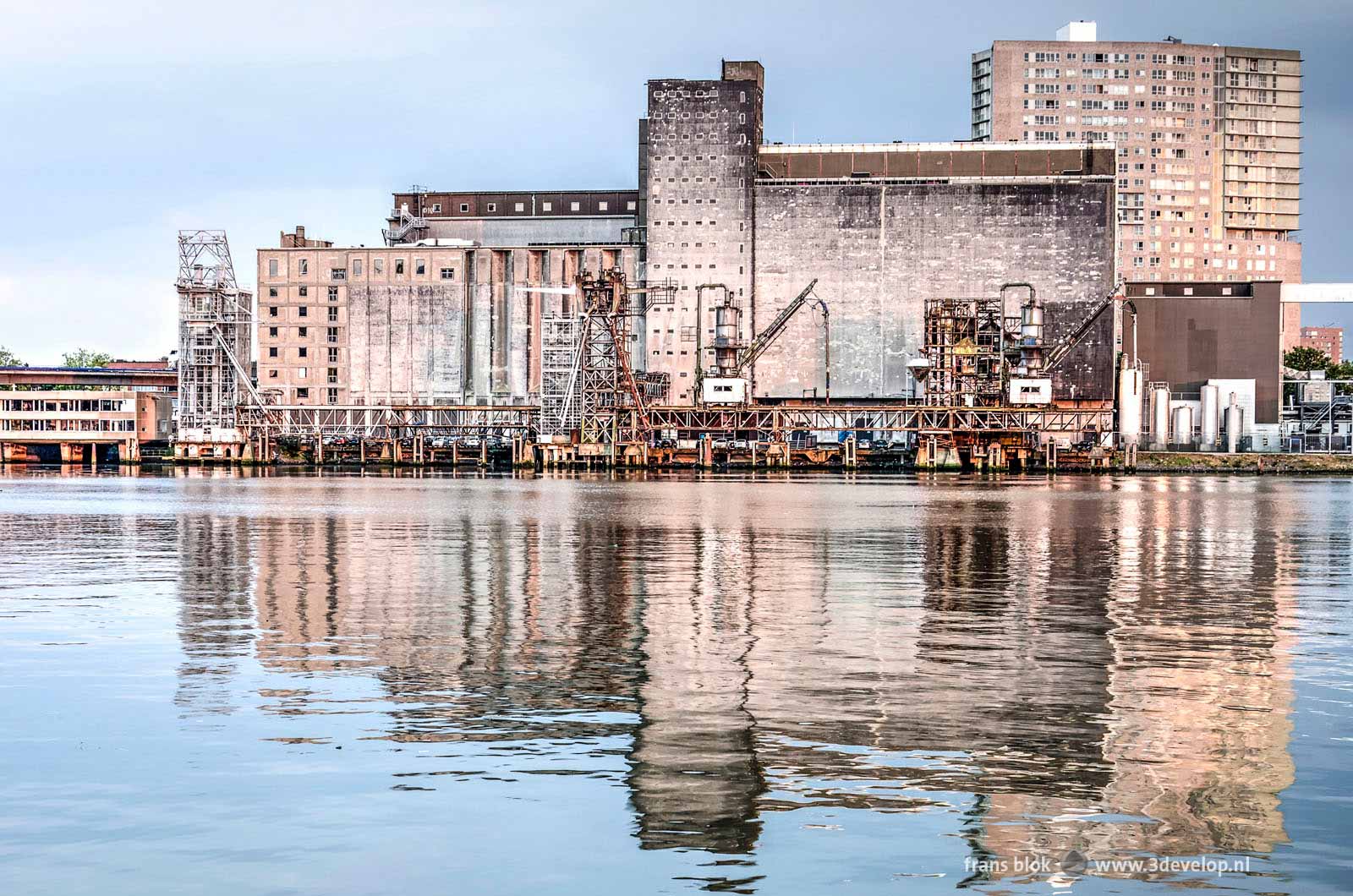 Making the public accessible to the roof is a next phase of colonization. But what is a good idea for the use of such a large surface? A green roof? Green roofs are popular: they retain water, purify the air, isolate the underlying spaces and they simply look beautiful. For the Maassilo I actually thought of a golden yellow roof: a wheat field. It’s after all not a coincidence that the building is located in the Wheat District (Tarwewijk), which in turn is probably named like that because the silo is there)

For decades, the Maassilo was a transit point for grain, which was produced and consumed elsewhere. How beautiful would it be if in the twenty-first century the whole chain of production and consumption takes place on the roof of the silo?

On the roofs of silo sections 1 (Stok) and 2 (Brinkman and van der Vlugt) there is room for two cornfields, which make the link to the history of the building. The roof of section 3 (Postma), long and narrow, is more suitable as a pedestrian promenade, under a canopy of solar panels, with stunning views over the cornfields and the city. 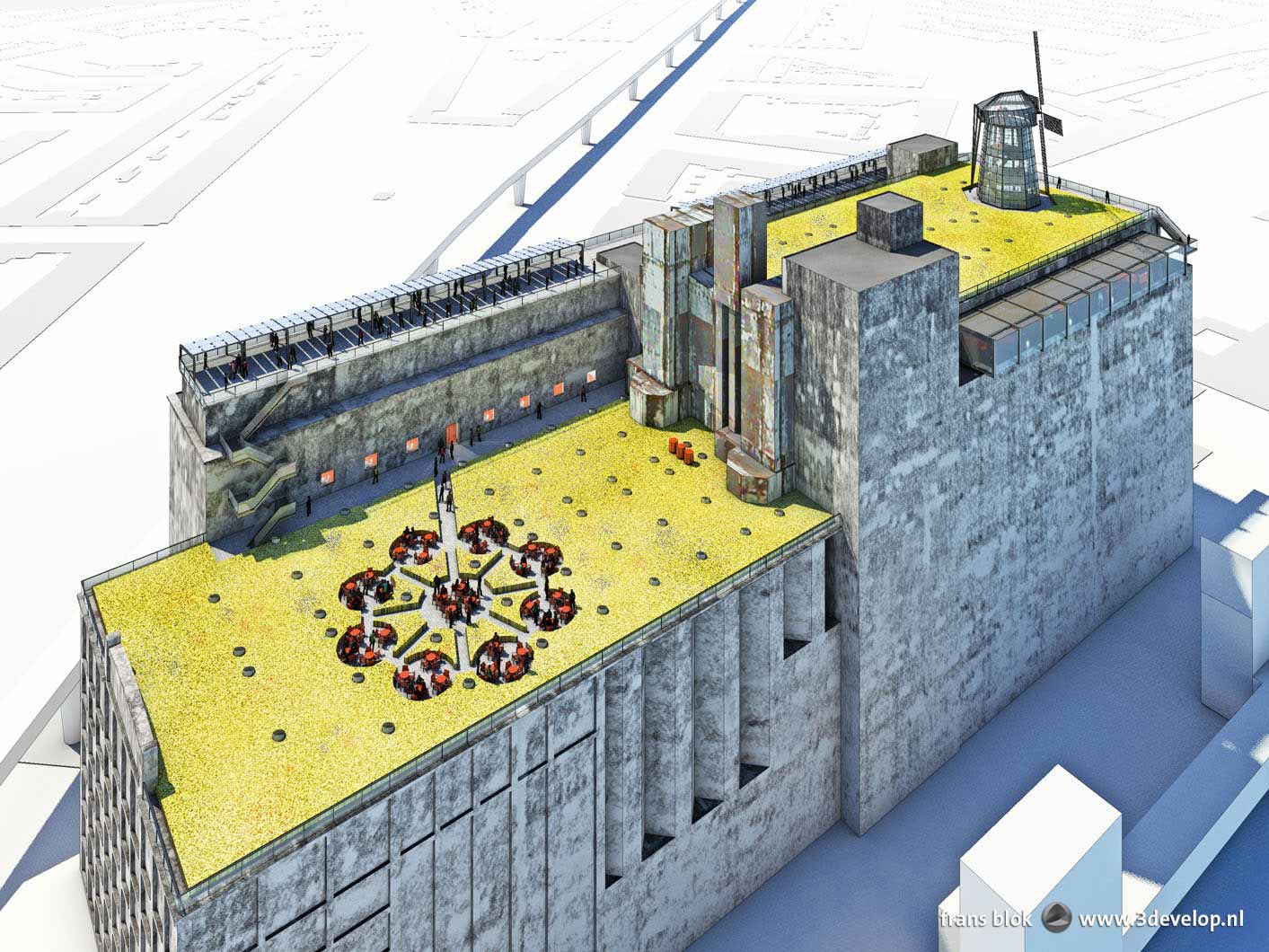 In the cornfield on the highest and most  windy silo section 2 I imagine a corn mill. Built in glass and steel, with the elevators on the quay as a source of inspiration. Here the grain is processed into flour, raw material for the pancakes that are made in a pancake restaurant in silo section 3, with a terrace in a crop circle in the adjacent cornfield.

Sowing, harvesting, threshing, grinding, baking and serving, with traditional means such as scythes and flails, is done by a cooperative of residents of the surrounding neighborhoods.

The grain is organically grown so that cornflowers and other flora get every chance. This attracts bees who these days really could use a helping hand. The honey that they produce can be served on the pancakes. 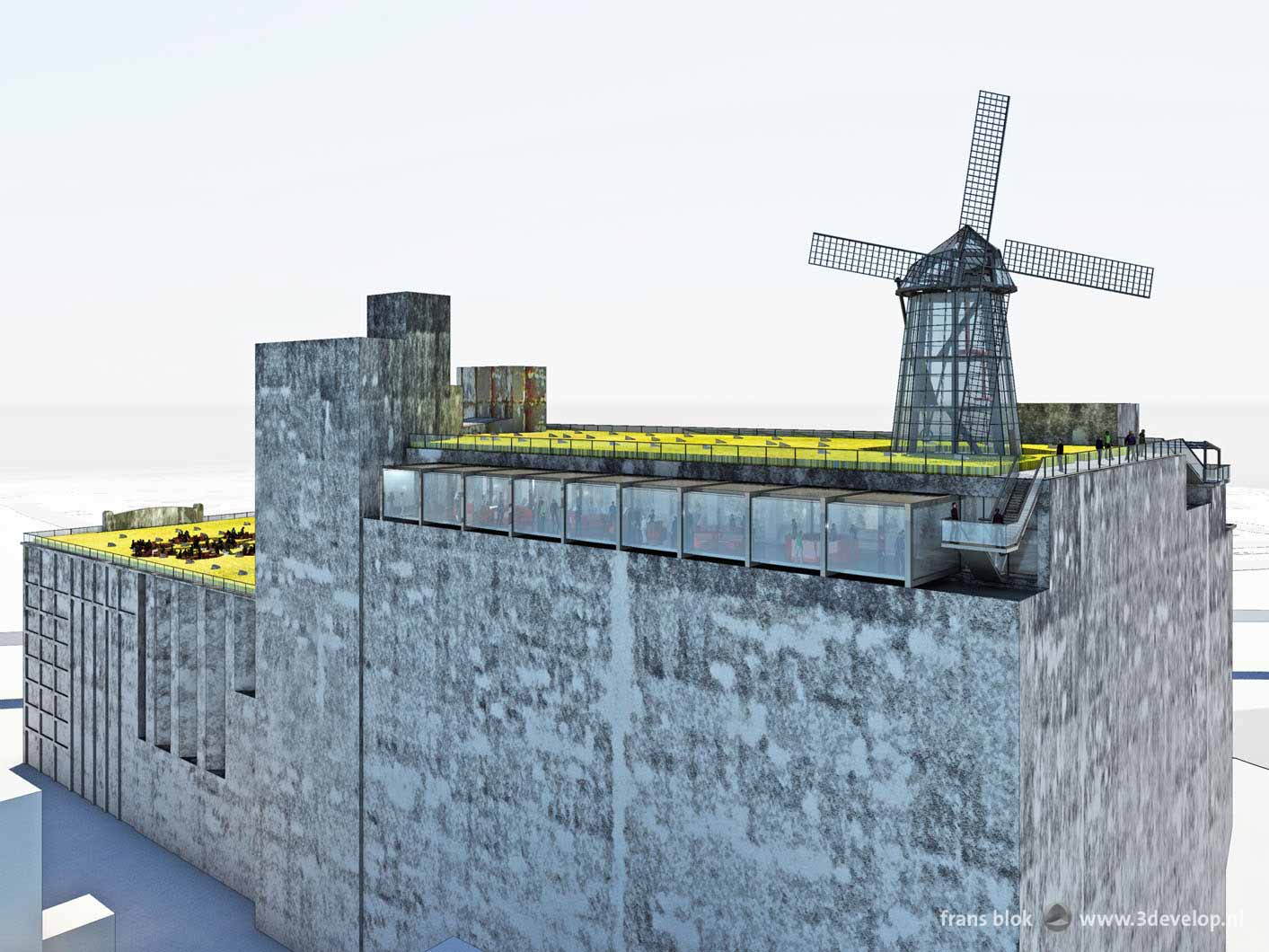 I envision the skybox as a (largely) glass box that is partially placed into the attic of silo section 2 and which protrudes one and a half meters outside the northern façade. A strip in the floor and the ceiling along the north facade is also made of glass. Visitors find themselves between the installations and constructions of the silo attic and the breathtaking views over Maashaven harbour, Katendrecht neighbourhood and the Rotterdam skyline.

Can the roof carry a wheat field? This needs to be investigated further; perhaps reinforcements have to be installed, but the underlying structure of the silos is undoubtedly solid enough. After all, they were once completely filled with grain. 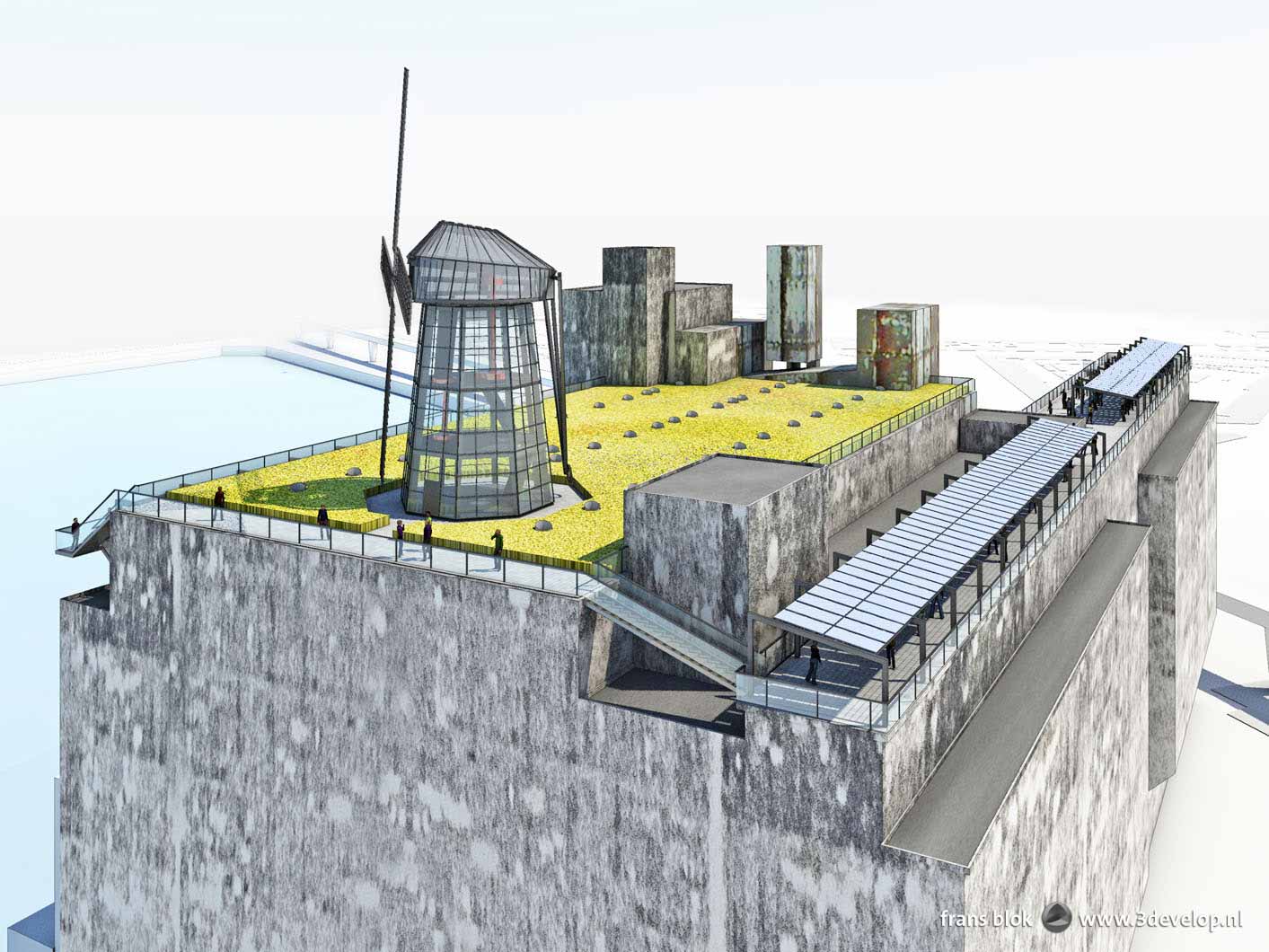 The submissions were exhibited on 2 October in the space of Now & Wow on the tenth floor of silo 2. The other competition participants has, as can be expected, also done their very best. The room was overoaded with good ideas and brilliant visualizations. There were parks, gardens, farms, forests, campsites, sports fields, cinemas, open-air theaters, hotels, power plants, a roller coaster and a Ferris wheel on the roof.

The grain idea was not unique; I saw at least two other plans with cornfields, which perhaps shows that it’s a good idea. In one of those plans, Hop on Hop off by, among others, my esteemed ex-VHP colleague Ronald van Bommel, grain-related products also played a role. Just no pancakes like in my plan, but rather bread and beer. A beer brewery; why did not I come up with that idea myself?

My plan unfortunately did not win. The first and second prize-winning plans, Elevator en Maassilotop, focused mainly on the skybox and okay, that part was somewhat less elaborated in my plan. Anyway, it would be nice if the further development of the Maassilo is gaining momentum through this competition. If only ten percent of the submitted ideas are implemented in one way or another, Rotterdam has a new wonder of the world. The building deserves it. 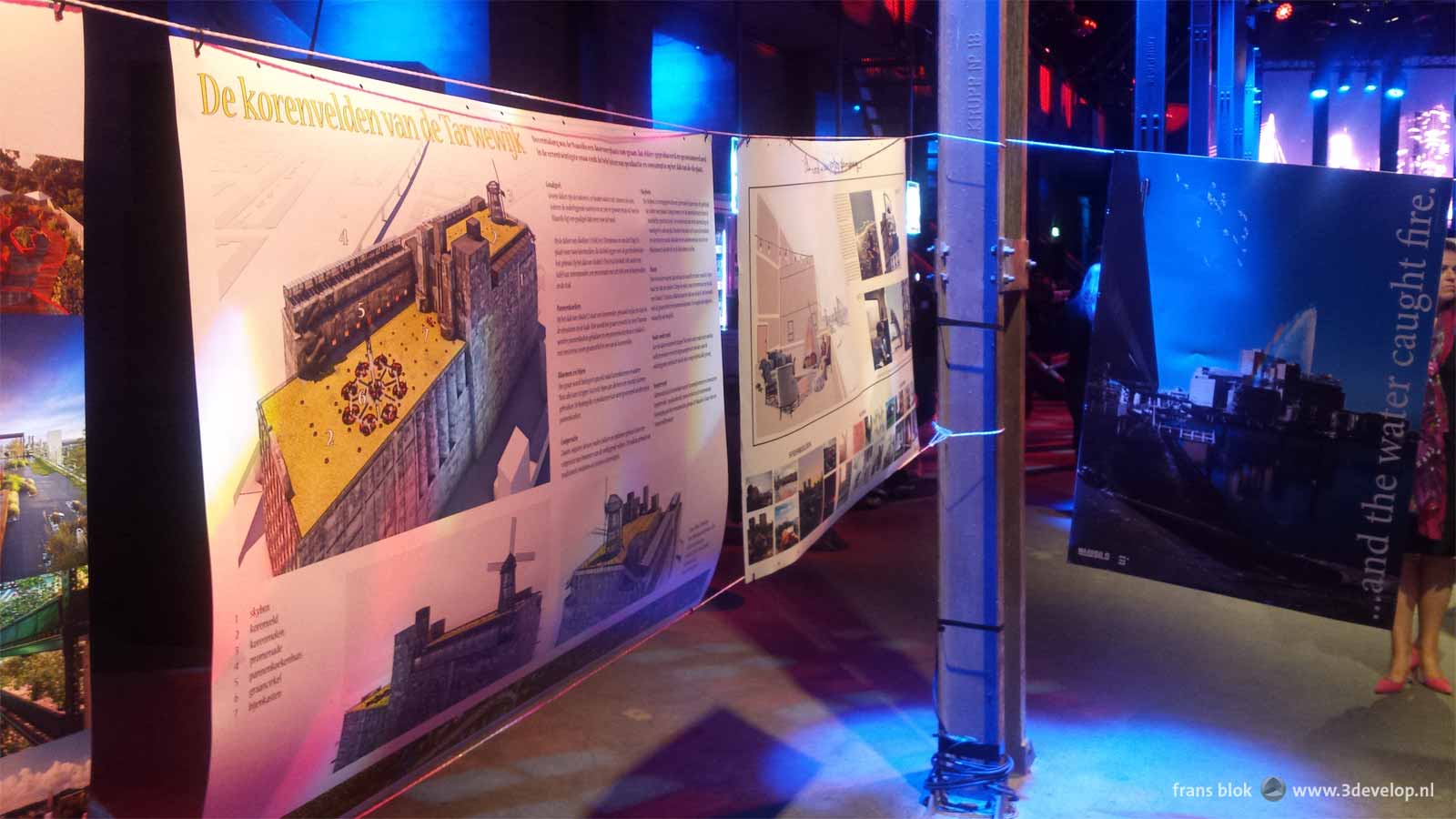 Update: all proposals can now be viewed at the Maassilo website.