How to Crop a Country – The Netherlands in Scrapwood

Sometimes, when I’m struggling with a design issue, I ask the Facebook panel for advice. Social media are a blessing for a freelancer: since I no longer work in an open-plan office, I cannot easily ask a few colleagues what they think. In those cases, therefore, I ask my Facebook friends for their opinion.

Recently the panel helped me with the important issue of the scap wood map of the Netherlands. An interesting piece of digital recycling: a map of my country made of old boards, slats, boxes, scaffolding wood, plywood, floor boards and similar scrap. 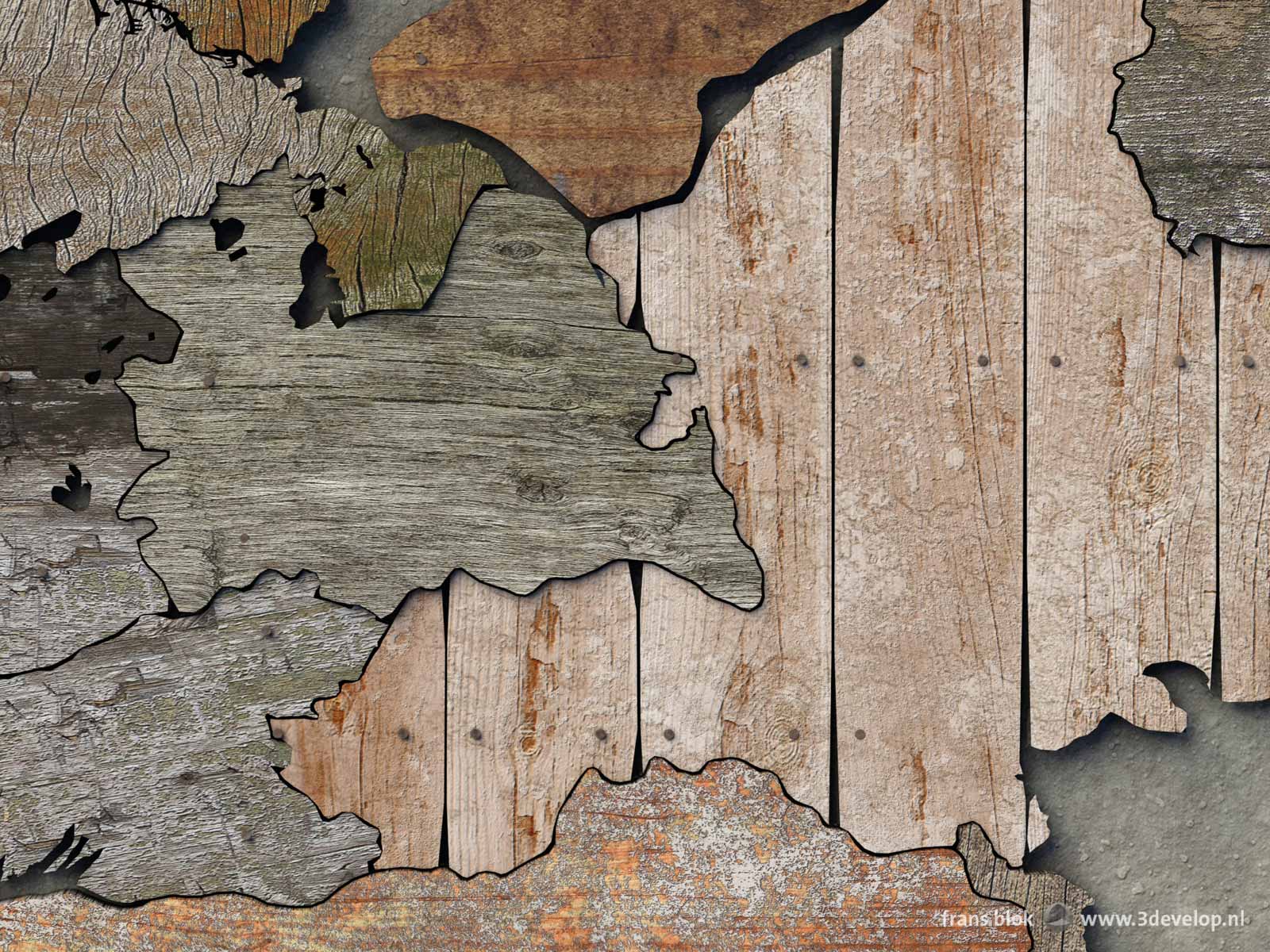 But what is the best way to crop a map of the Netherlands? Square, portrait or rotated? The square crop leaves relatively much white space (in this case actually gray space) left and right. But the portait version results in a lot of white space at the top and bottom.

After rotating the whole country some twenty degrees counterclockwise it fits a lot better in a rectangular frame. But we are so used to having the north on top that even such a small rotation looks weird.

Approximately half of the panel members opted for the square version, but the two other versions also had fans and received each about a quarter of the votes. A panel member motivated his choice for number three with “permecologically the optimal one, the least white space and largest data density per pixel²”.  I could not have said it better.

Especially version 3 provoked mixed reactions. One of the panel members thought it made the country look drunk .

Another member, on the other hand, spotted the Dutch Lion in this option. Even though lions have never been part of the indigenous fauna of the lowlands, the animal has found its way to flags and blazons. And yes, I certainly see a similarity… 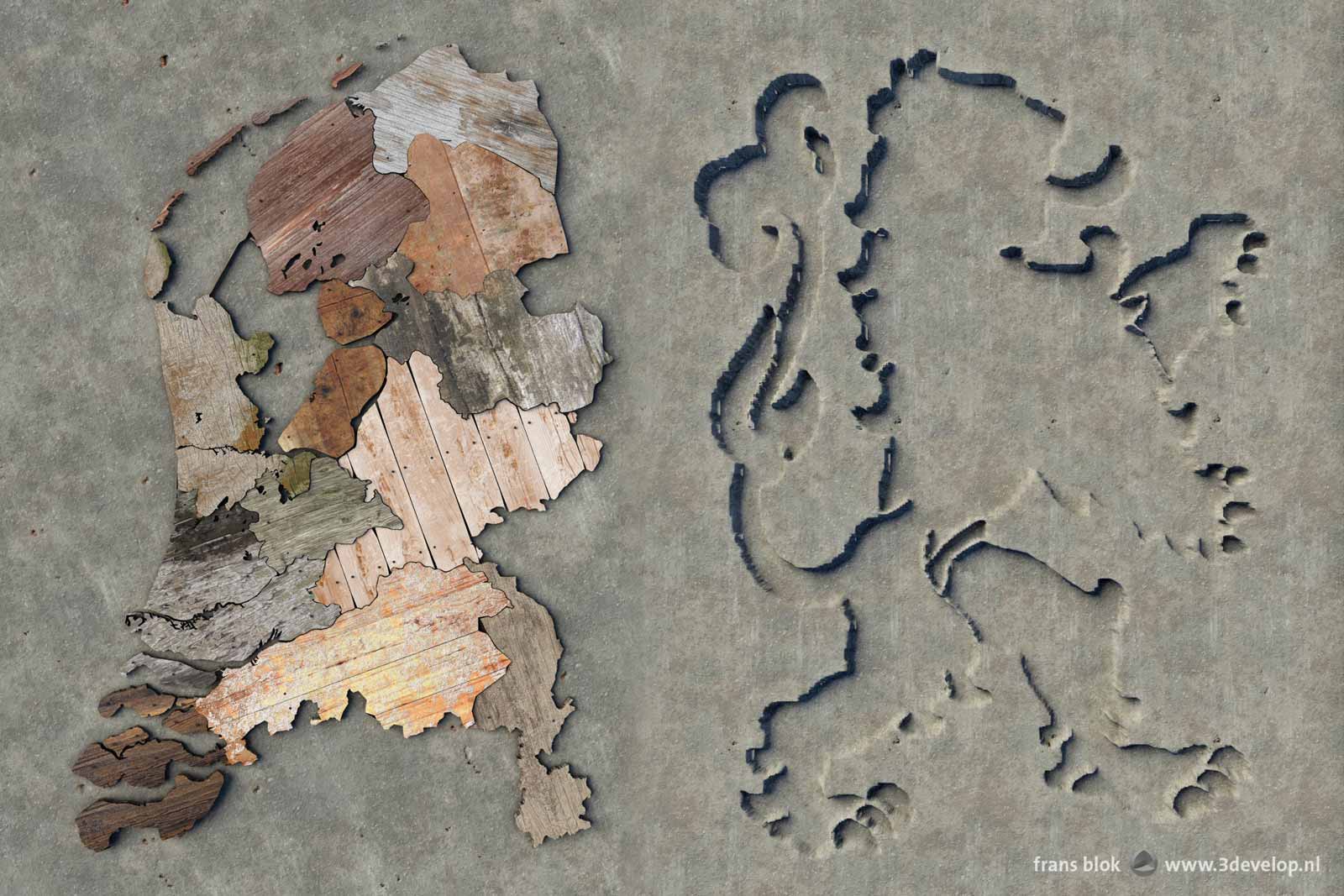 But the panel also came up with other alternatives, referring to historical maps. For example the map of Inferioris Germaniae, for example, made by Joan Blaeu in 1649, on which the North Sea (the Oceanus Germanicus) is at the top.

Another mapmaker, Abraham Ortelius, put the North Sea on the bottom on his map of Hollandiae Antiquorum in 1581.

For the version that I have put in my webshop I have picked the rectangular variant, with a little modification: ratio 4: 5 instead of 3: 4. But of course, I can make other crops by request. That is the advantage of digital recycling. 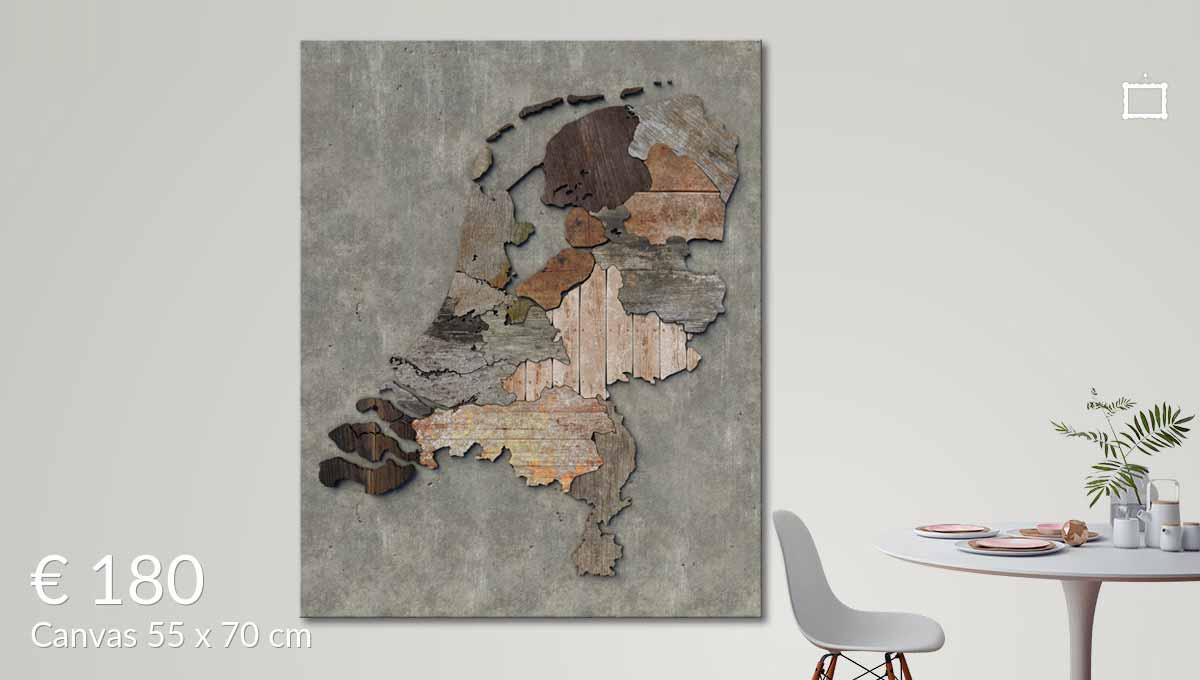 A world map of scrap wood is on its way. But the cropping issue does not really play a role there.

In general, the Dutch provincial borders are fairly stable, but occasionally something changes, usually as a result of a municipal reorganization. The province of Utrecht in particular tends to expand at the expense of South Holland from time to time. In 2019 Leerdam, Vianen and Zederik merged to form the municipality of Vijfheerenlanden. Leerdam and Zederik used to be in South Holland, but the new municipality was added to Utrecht. Fortunately, South Holland continues to border on Gelderland, although that border has now shrunk to a few kilometers near Gorinchem.

When I was adjusting the scrapwood map to the new reality, I also corrected a small mistake that hardly anyone noticed. I had accidentally added the Land van Heusden and Altena to South Holland, but in fact it belongs to North Brabant. That mistake is not incomprehensible; with its clay soils and protestant population, the area is an anomaly in sandy and catholic Brabant. But this is the way the boundary runs.