For decades it seemed to be one of the untouchable certainties of existence: at the end of March we move the clock one hour ahead and at the end of October we put it back again. Lovely long and light summer evenings, everybody happy.

European Commission chairman Jean-Claude Juncker put an end to that certainty on 31 August 2018. He mentioned a survey that supposedly showed that a majority of Europeans want to get rid of the clock shift. “People want it, so we’re going to do it,” Juncker said firmly. Those people, however, turned out to be mostly Germans; two-thirds of the participants in the survey were from Germany. 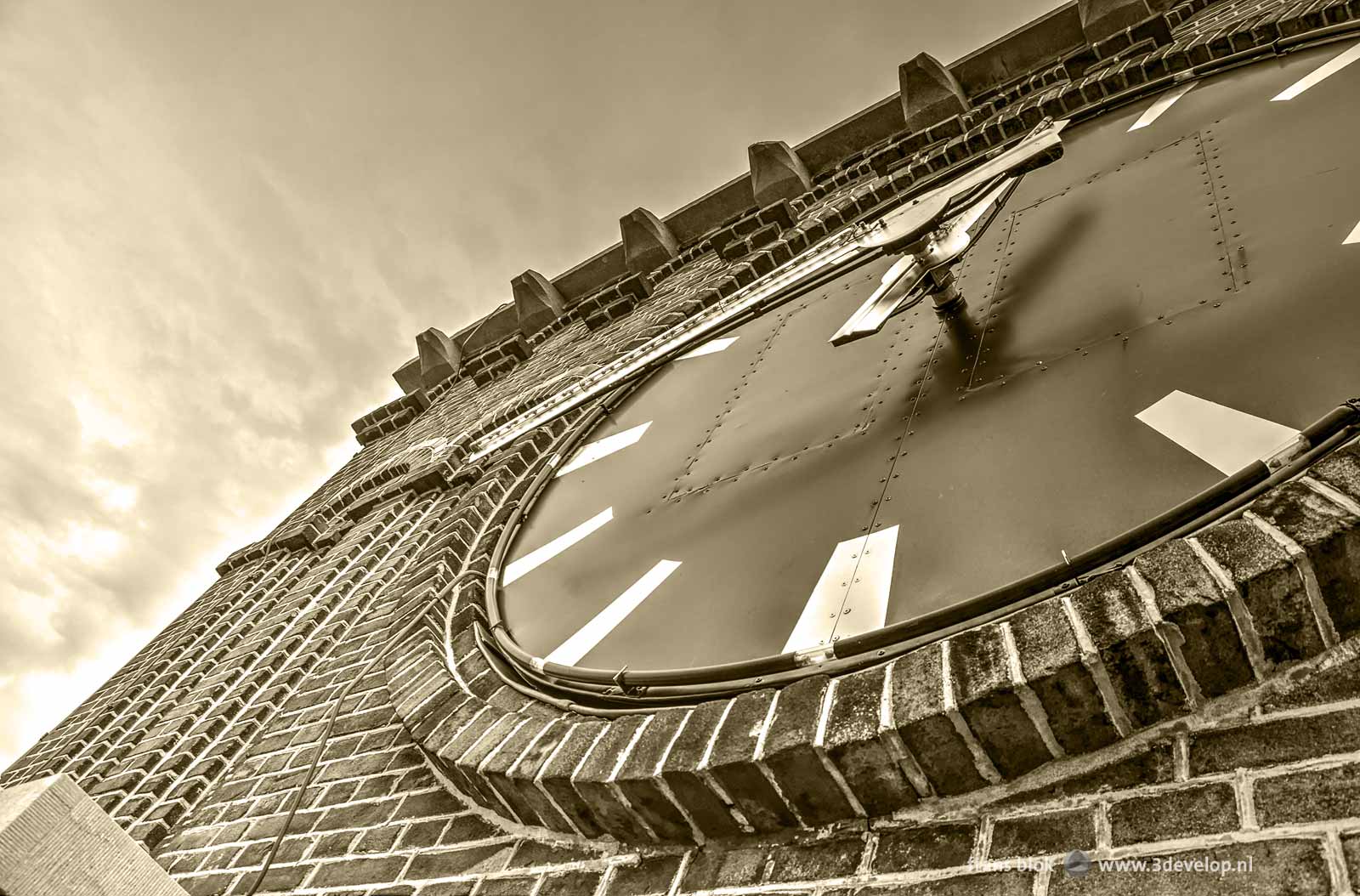 And now the question is: do we opt for the winter time (which was the standard time until 1977 in the Netherlands) or for the summer time (which we have been using for seven months in the year since then)? According to Juncker, the European member states must now decide for themselves. But didn’t we invent the European Union to take care of such issues?

In my circle of friends, a heated discussion broke out between supporters of summer and winter time. I myself tend to prefer summer time, but why? I think a few nice graphs can make the dilemmas clear.

Of course, the sun does not rise everywhere at the same time; after all, the Earth is a sphere. Even in a small country like the Netherlands, the differences are noticable. In Bad Nieuweschans in the north east, it gets light 25 minutes earlier in summer than in Cadzand it the south west. In winter the difference is a mere seven minutes. Since Utrecht is more or less halfway Cadzand and Nieuweschans, I based my charts on the tables of that city. 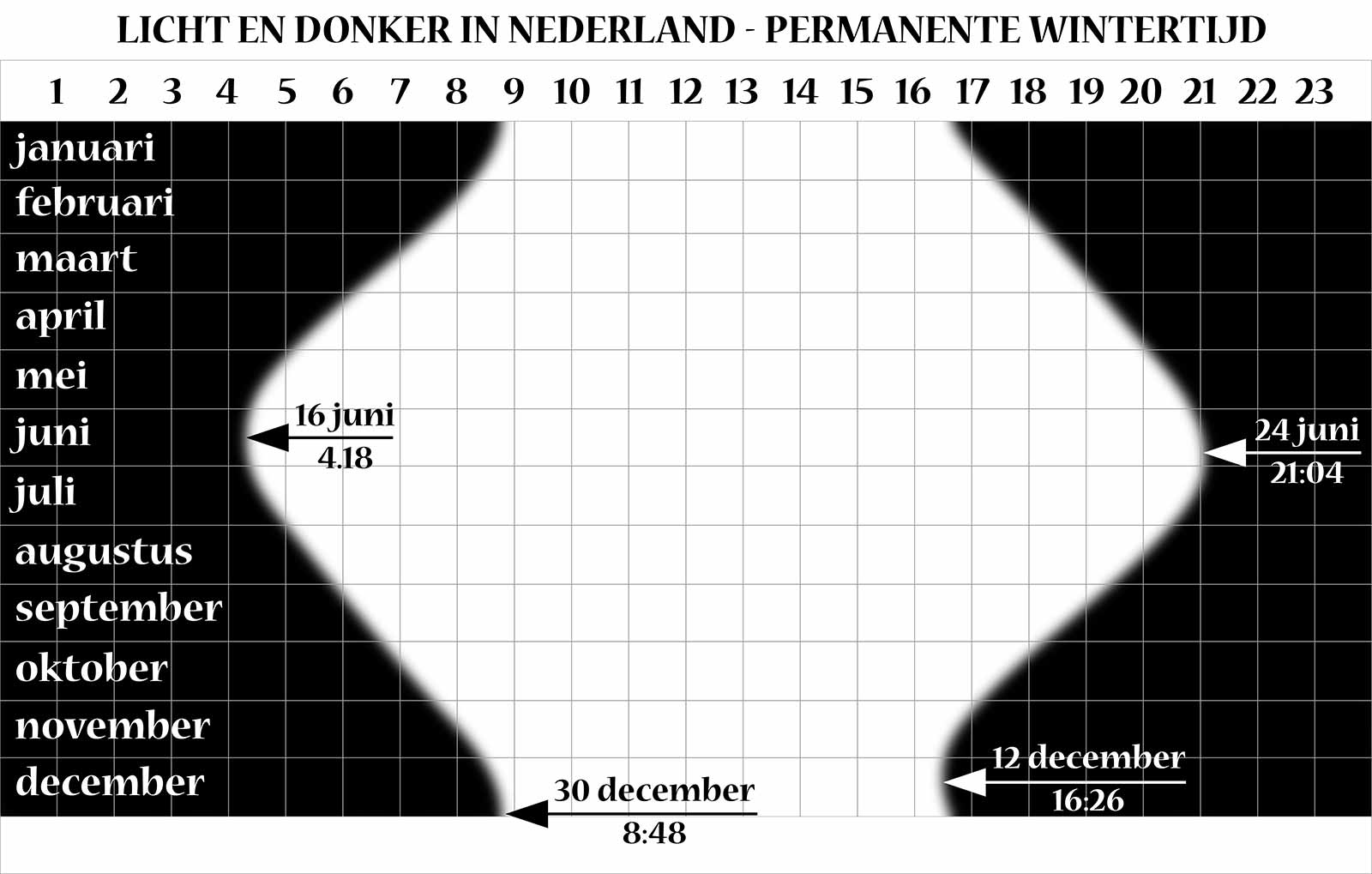 One can think of many reasons for choosing winter or summer time. What are the neighbors doing, for example? But a very important criterion seems to me this one: let the hours of daylight  as much as possible coincide with the hours that people are awake. People are awake for about 16 hours a day and there’s daylight for 12 hours a day on average. So there will always be times when it is dark while most people are awake. But it is a terrible waste when it is light outside for hours while everyone is still asleep.

So when is the average person awake? My own day runs from about eight o’clock in the morning until midnight. I have always been fortunate enough to work for employers where most of the colleagues came in between 9 and 9.30. And now that I’m self-employed, it’s all up to me.

The construction workers outside my bedroom window however (praise for the earplugs!) start making noise at 7 am. And I know people who get up so early that they can check in at Dutch Railways before the official rush-hour starts (half past seven); I can hardly imagine how early one has to get out of bed to accomplish that.

On the other hand, there may also be people who get up later than I do. And in the weekend, we are all a bit later .

I have not carried out an in-depth investigation and the National Statistics Board, as far as I know, has not either. But I think it’s a safe bet that the average Dutchman and woman get up around 7 am and go to bed at 11 pm. If we overlay that assumption on the winter time graph, we get the following picture: 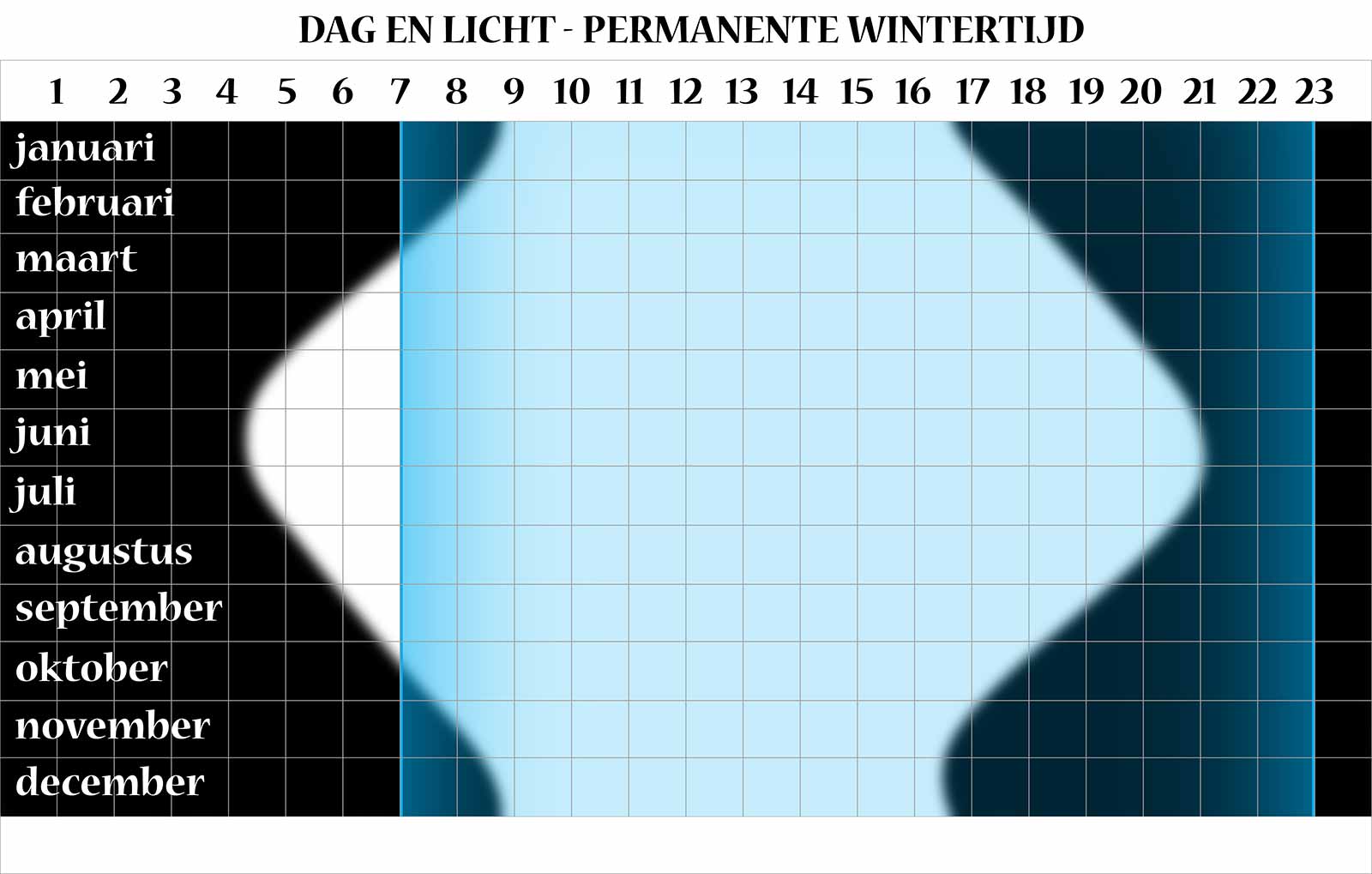 We see a huge imbalance between daylight and the hours that people are awake. If we opt for the winter time, for seven months a year there will be light outside while most people are still sleeping. At the end of June, morning even breaks at about four am. And that’s a terrible waste of daylight.

On the other side of the graph we see a lot of darkness. Around the longest day we’ll have daylight until about nine o’clock, but other than that, those lovely long and light summer evenings will be just a beautiful memory. 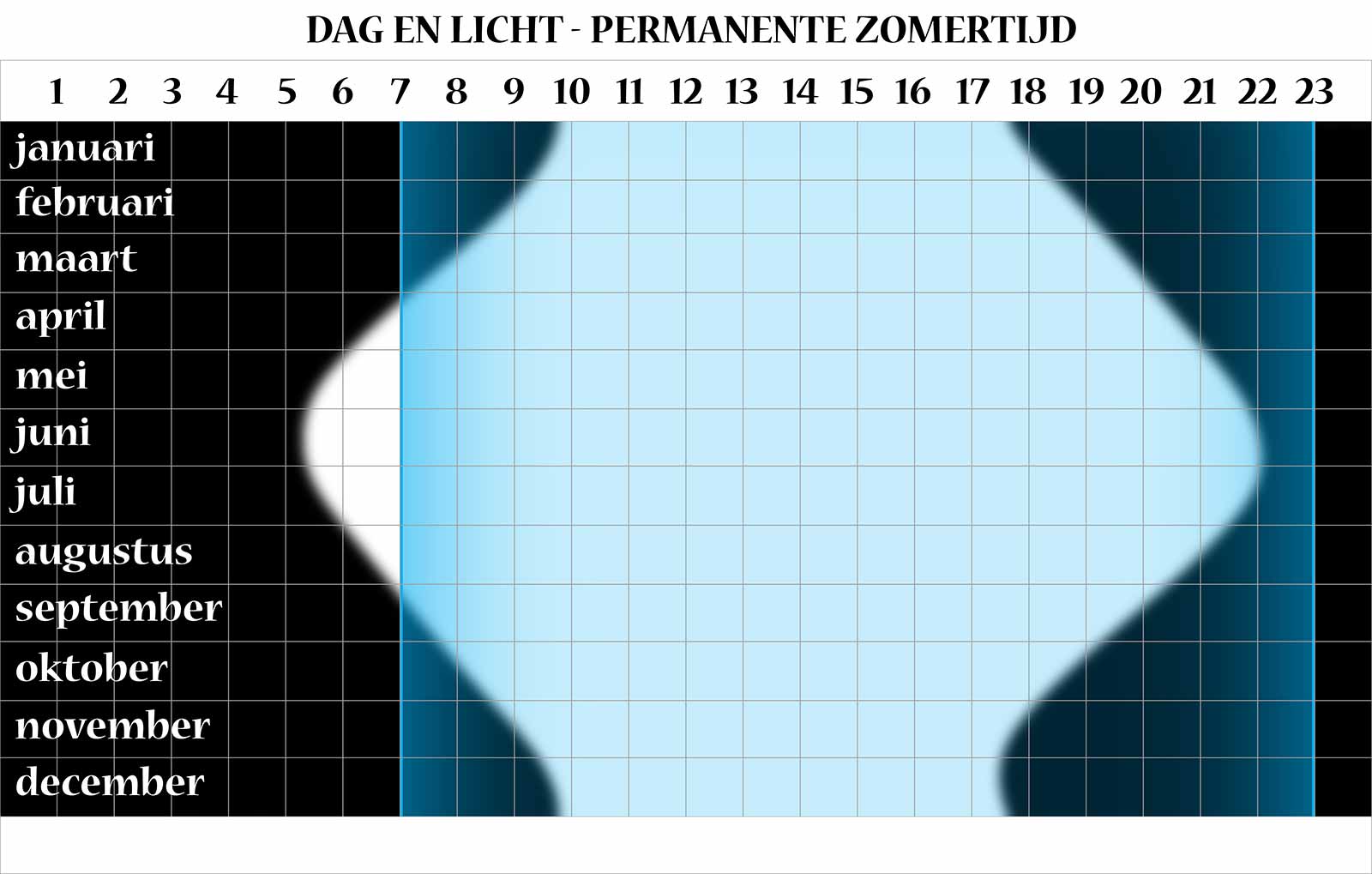 There are also objections to the permanent use of summer time. Morning people are horrified by the idea that around the turn of the year, it remains dark until half past ten. But allright: isn’t it a good idea then to simply keep moving the clock in March and October, like we have done for a long time? Regardless of what those few Germans think who completed that survey?

Some people suspect that moving the clock messes up their biorhythm, with all sorts of health issues as a result. I don’t want to trivialize that, although when I move the clock one hour back on a trip to England, after a few hearty English breakfasts I’m used to the new time zone.

Anyway, the graph shows that these inconveniences twice a year are not in vain. They also brings a lot of good. So as far as I’m concerned: let’s keep it that way. 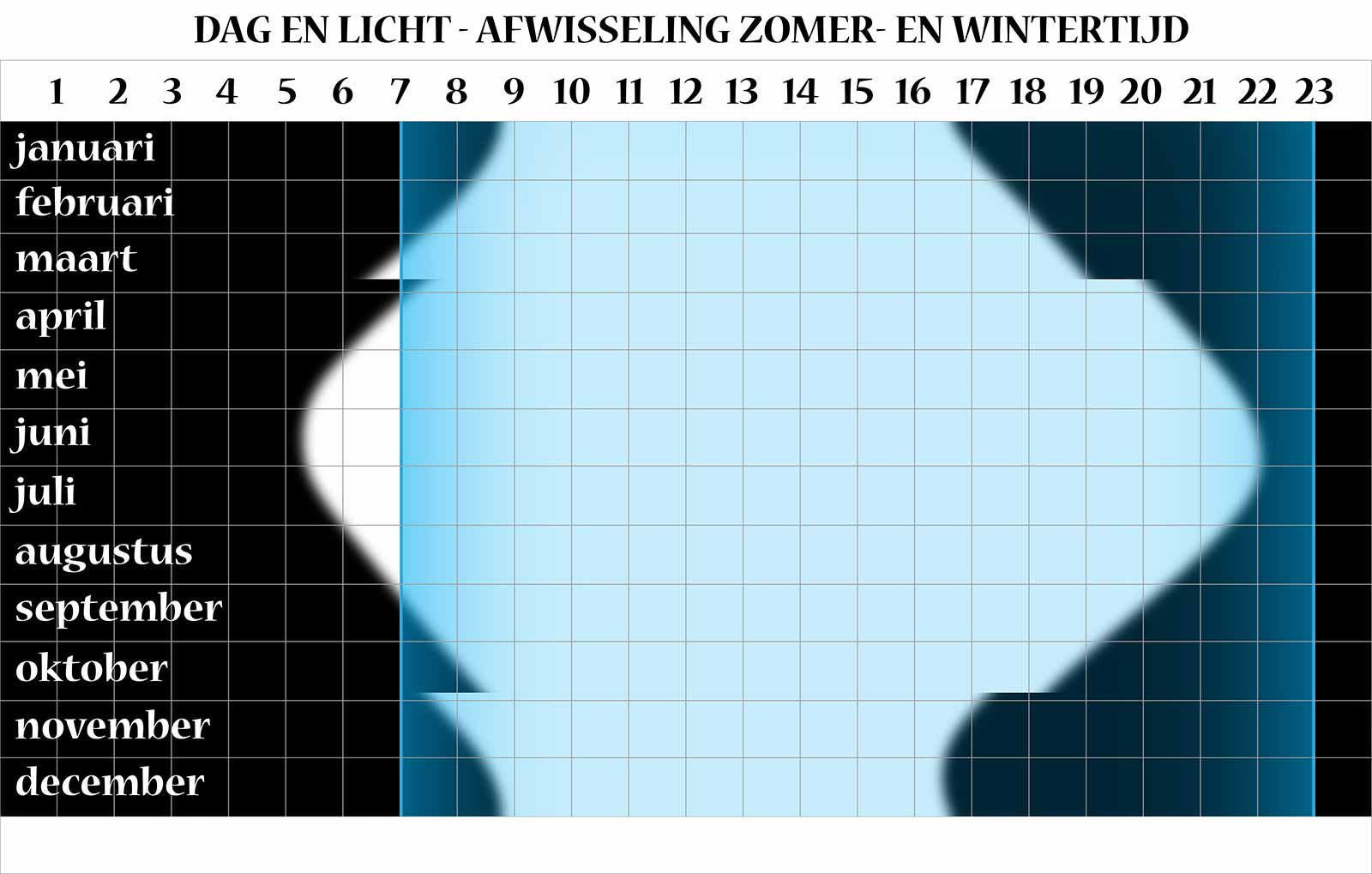 In fact, we could even put the clock forward for another hour at the end of May (and put it back back in late August). But I fear that that plan will encounter some resistance.