The Barge: a New Stadium for Feyenoord

For a few years now, there have been discussions about a new stadium for Feyenoord, replacing the legendary football temple and municipal monument, De Kuip.

Allthough I am not as frequent a visitor of the stadium as some of my fellow townspeople, I also have my memories of De Kuip. For example, of a competition match of Feyenoord against Vitesse: 2-1. Pierre van Hooijdonk was still playing then, so it must have been a while ago.

Much longer ago I was at the best concert of the  (twentieth) century by Eric Clapton. With Elton John as a disastrous support act and the then virtually unknown Bonnie Raytt doing a highly appreciated performance in between the two.

Almost everyone in Rotterdam and the region has already given his opinion on the plans for a new Kuip. I thought I had little to add to the discussion.

But when local newspaper Algemeen Dagblad organized a contest of ideas for the new stadium, I got inspired. There is no prize money, but a meet and greet with Dirk Kuyt is obviously an interesting prize. Dirk Kuyt, The Netherlands’ most versatile footballer; I’m sure he could design a stadium as well.

Oh wait, upon closer inspection Kuyt is only in the jury; the meet and greet is with David Gianotten from OMA. Well, in fact that may be more interesting for my network.

So I was a musing over my laptop. And before I knew it I had designed a stadium. 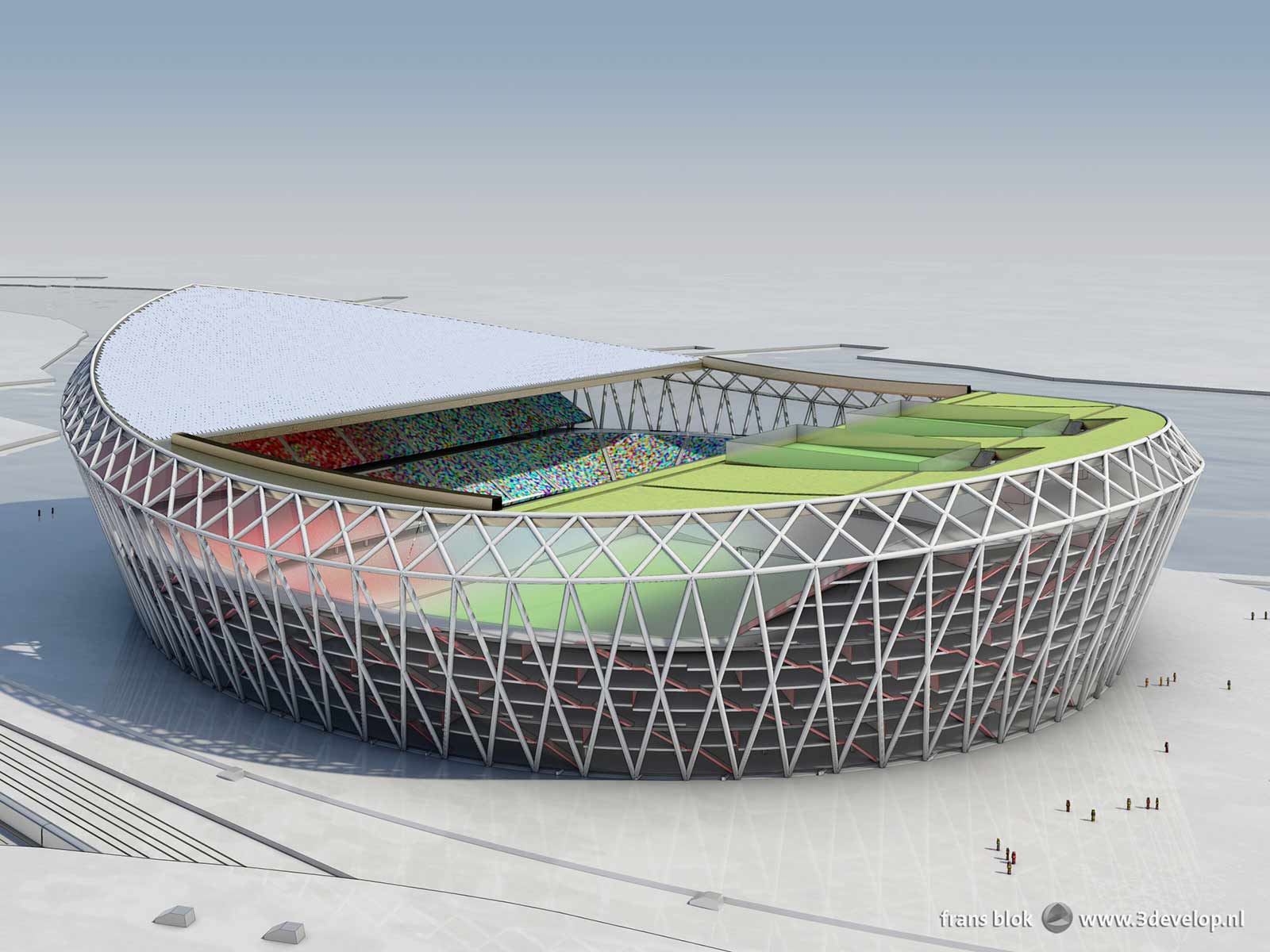 Designing a stadium is an incredibly complicated job. Sight lines, acoustics, construction, escape routes, Fifa guidelines, there is an awful lot of things that have to be done right. It is an illusion that one guy with a laptop can do that for a contest by the local newspaper.

However such a competition is a good occasion to come up with an out-of-the-box idea. An idea that has not been calculated down to the last seat and escape stair, but that is based as much as possible on plans and cross-sections of existing stadiums. An idea that tickles the imagination and that shows what could be there in a couple of years, on this special location by the river.

And a special place it certainly is, perhaps the most visible site in town. The railway line towards Antwerp, Brussels and Paris whizzes right past it. A major traffic route from the ring road to the center  folds itself around it. Moreover, the stadium will be next to, and partially in, the river Nieuwe Maas, so it can be seen from miles around. 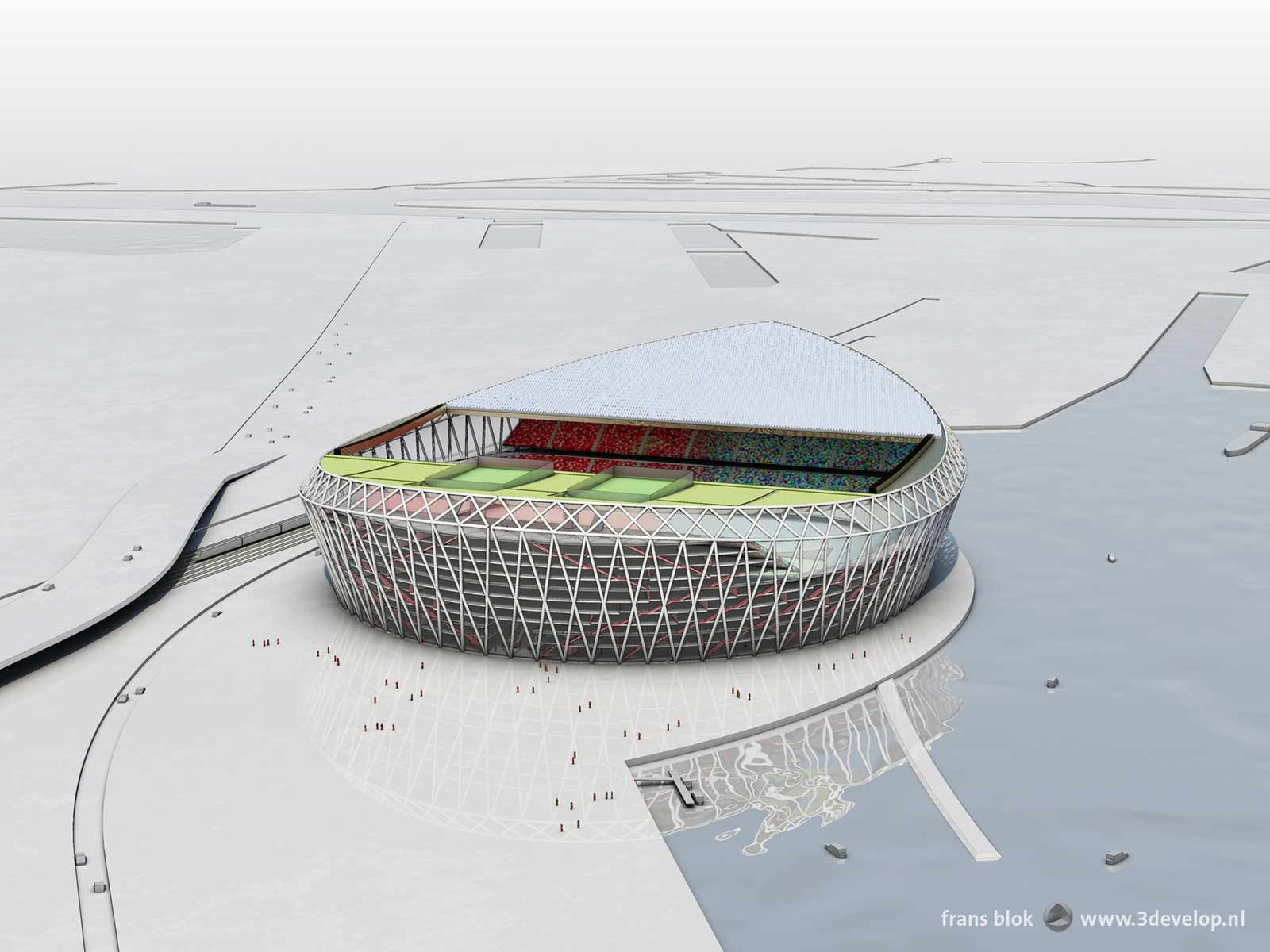 The plan of my competition entry is the result of a few simple edits of the standard plan of a football stadium.

Almost every big stadium has stands on all four sides of the field. This results in a rectangular floor plan on (1).

The best places to follow the match are on the long sides of the field. So let’s make the stands bigger stands on that side and smaller behind the goals. The shape of the plan becomes more of a square (2).

But the seats in the four corners of the square aren’t ideal either so it makes sense to further distort the plan into a circle (3).

I stretched the circle a bit and gave it a straight corner. The shape begins to look like a raindrop (4).

This results in an asymmetrical shape which gives the building a direction. It also adds some volume which is higher than the rest of the stadium, providing a perfect place for sky boxes, with a great view of both the field and the city. There is also space here for meeting venues, restaurants, a press center and a museum.

Finally I made the drop shape more gentle so the plan takes the form of a boat (5).

Indeed, a boat. Not an inappropriate metaphor in the largest port in Europe and certainly not on this location by the river.

The following section shows the stadium when Feyenoord is playing against, er, a team with pale blue as a club color. On the right we see the stern of the boat, left the bow.

The roof consists of three sections. The middle section, above the field can be opened. Or closed, depending on how you look at it.

On the rear deck I imagine a publicly accessible green roof with a few football cages.

The front deck rises up to the stern,  forming a perfect south facing slope with room for about 7,000 solar panels.

Alternatively, you could of course also grow vines here to produce red and white Feyenoord wine and use the yields to buy a few players. From the nearby Piet Smit Quay, the new stadium would look like this: 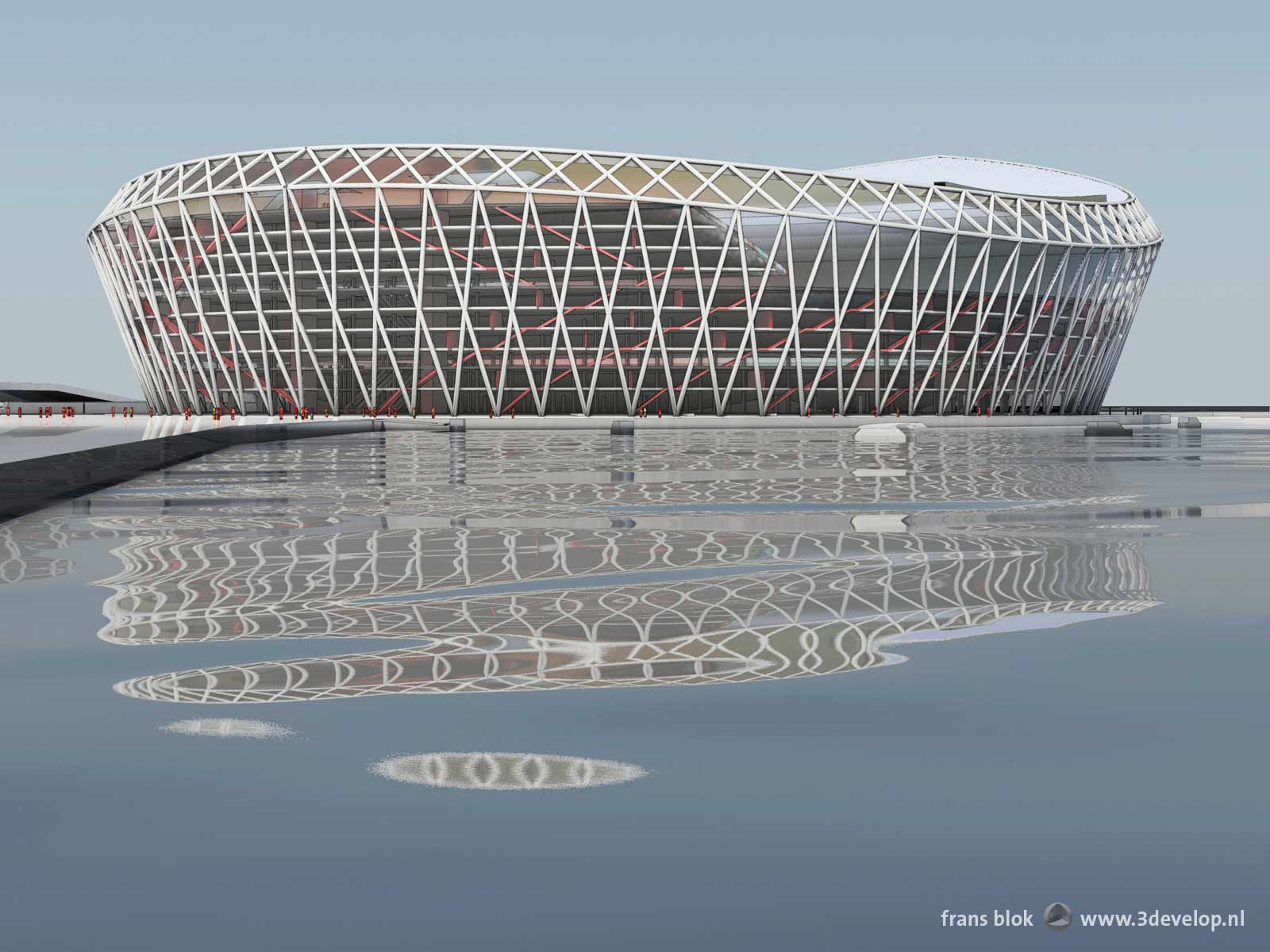 From the traffic jam

Another important viewpoint is the Van Brienenoord bridge from where the Rotterdam skyline reveals itself in all its beauty. This would be the contribution of the new stadium to that skyline:

The nickname for the new stadium would, most likely be De Schuit (The Barge), which has some reminiscence of the beloved Kuip. Both names are unpronouncable by non-Dutch speakers anyway.

So, somewhere in 2022, let’s take a watertaxi to The Barge for a match by Feyenoord or the Dutch national team or a concert by Eric Clapton. Does that sound right? On Saturday, October 15th, Algemeen Dagblad published a selection of “Dazzling Designs” that came out of the competition, The Barge being one of them. As a teaser for the article, the frontpage showed a picture of The Barge, along with the headline: “Will this be the new stadium?”

UPDATE: Thinking inside The Box

On November 10, Algemeen Dagblad announced the winner. Unfortunately the jury didn’t pick the Barge, but the design that children of the John F. Kennedy School in Hendrik-Ido-Ambacht made. Their proposal includes a climbing wall, a undulating roof, an F-shaped pier and very large football-shaped facade openings. Inside, the incredibly steep stands look spectacular. Also for this design a nickname is obvious: if this stadium is going to be built, everybody will talk about The Box. I certainly believe in its iconic potential. But let someone please check the sightlines from the stands to the field. Anyway: congratulations, kids of the JFK!

The Barge at Night

Even though The Barge will never be built, I want to seize the opportunity to send one more artist impression into the world. A night view of the festively lit Barge in the bend of the river. For the large archive of Never Built Rotterdam. 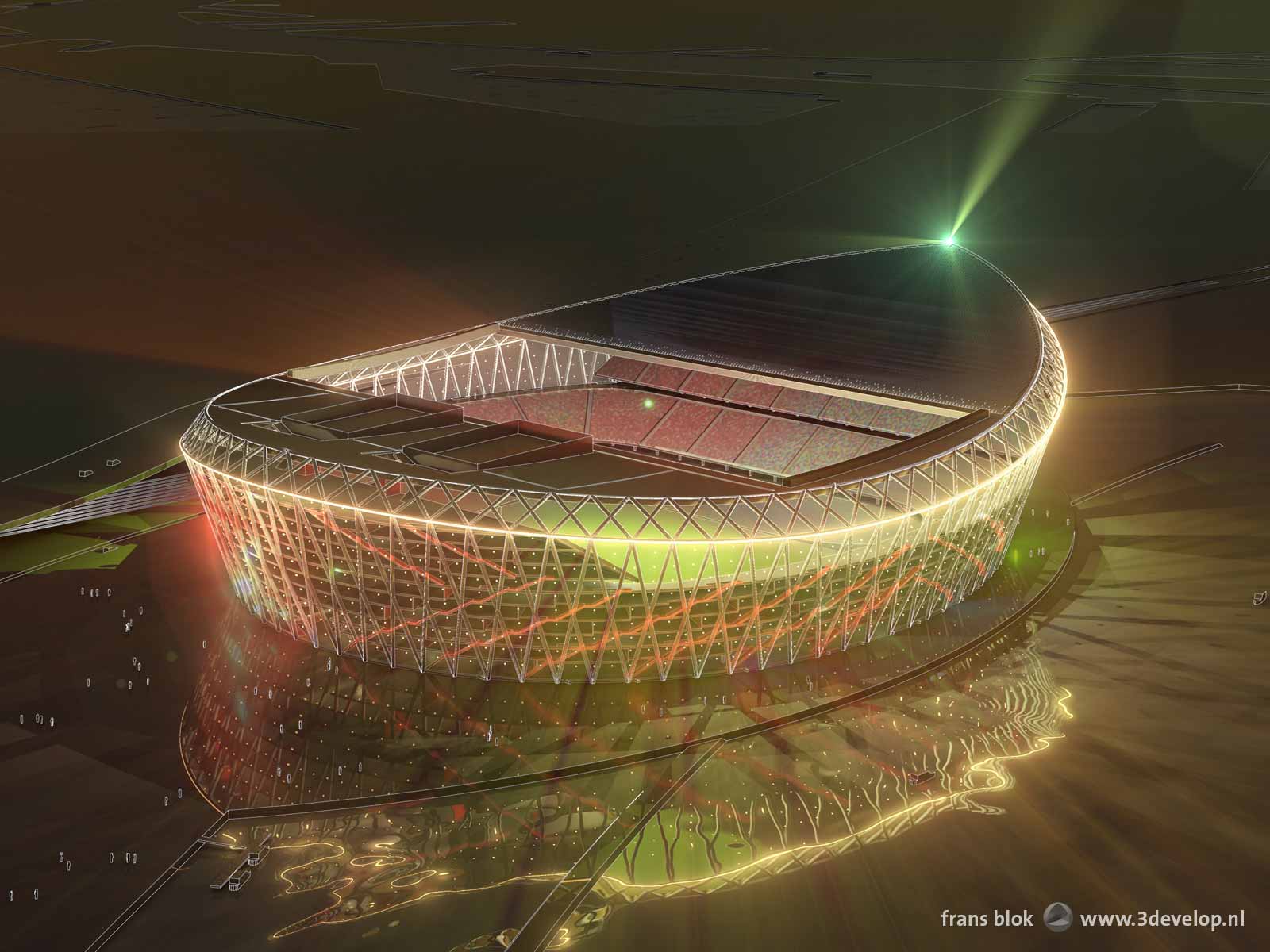