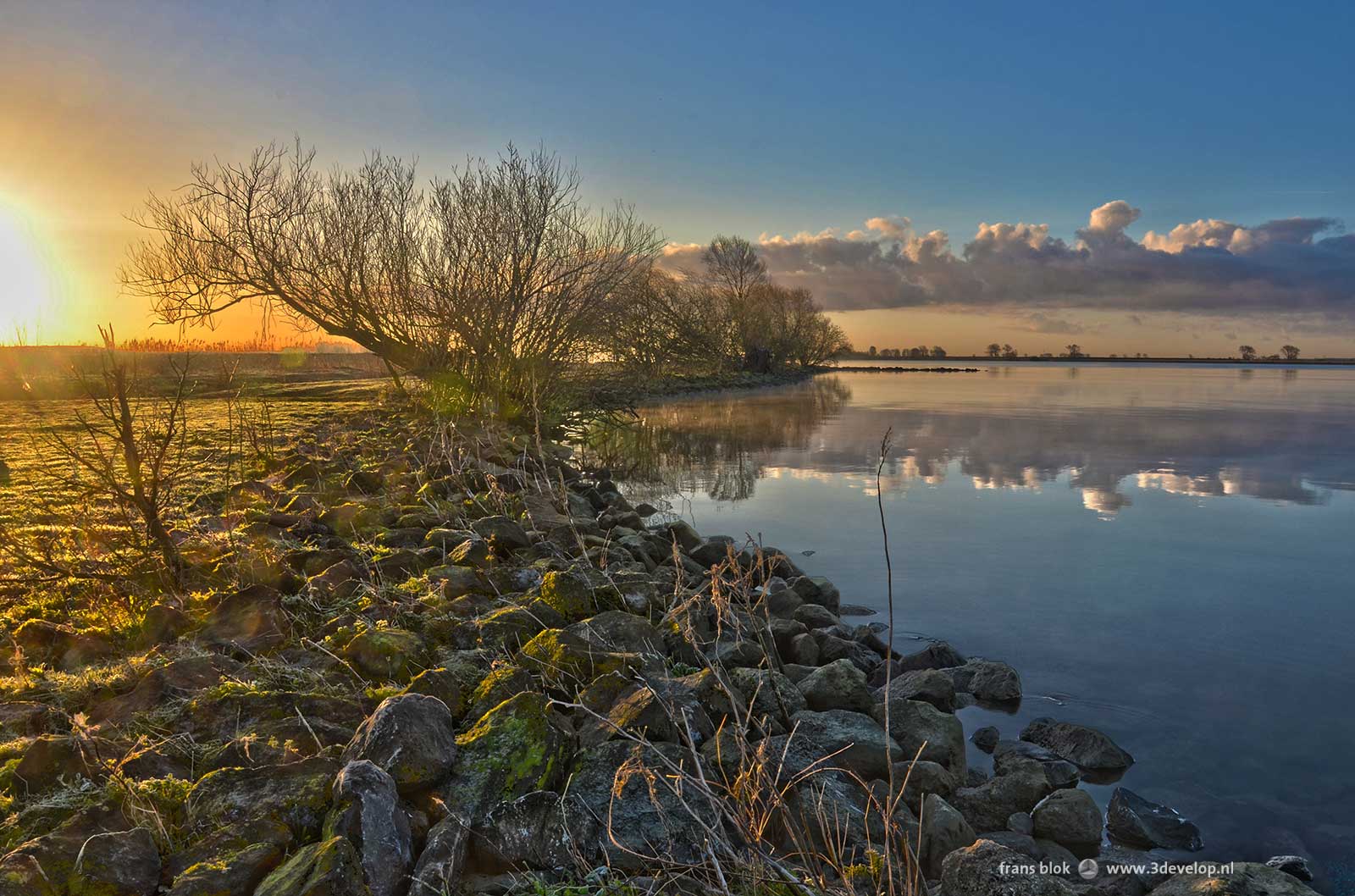 Getting up in the middle of the night is not something I like to do and I suppose a large part of the population has similar feelings. But for a landscape photographer the sunrise often provides the best opportunities for making beautiful pictures, so sometimes it is wise to set aside principles and put the alarm at six o’clock. On Easter Sunday 2015, we were very royally rewarded for that bravery.

The aim of the expedition were the Korendijk wetlands, a nature reserve on the island of Hoekse Waard, near Rotterdam. A large part of the area is only accessible at guided tours, like during the annual bluethroat excursion on this Easter morning.

The weather on that early morning will go down in history, for four reasons:

1. The sunrise was perfect

The persistent cloud cover from the days before was finally gone. But a blue sky without a single cloud is also slightly dull; fortunately there were just enough clouds to decorate the sunrise beautifully: 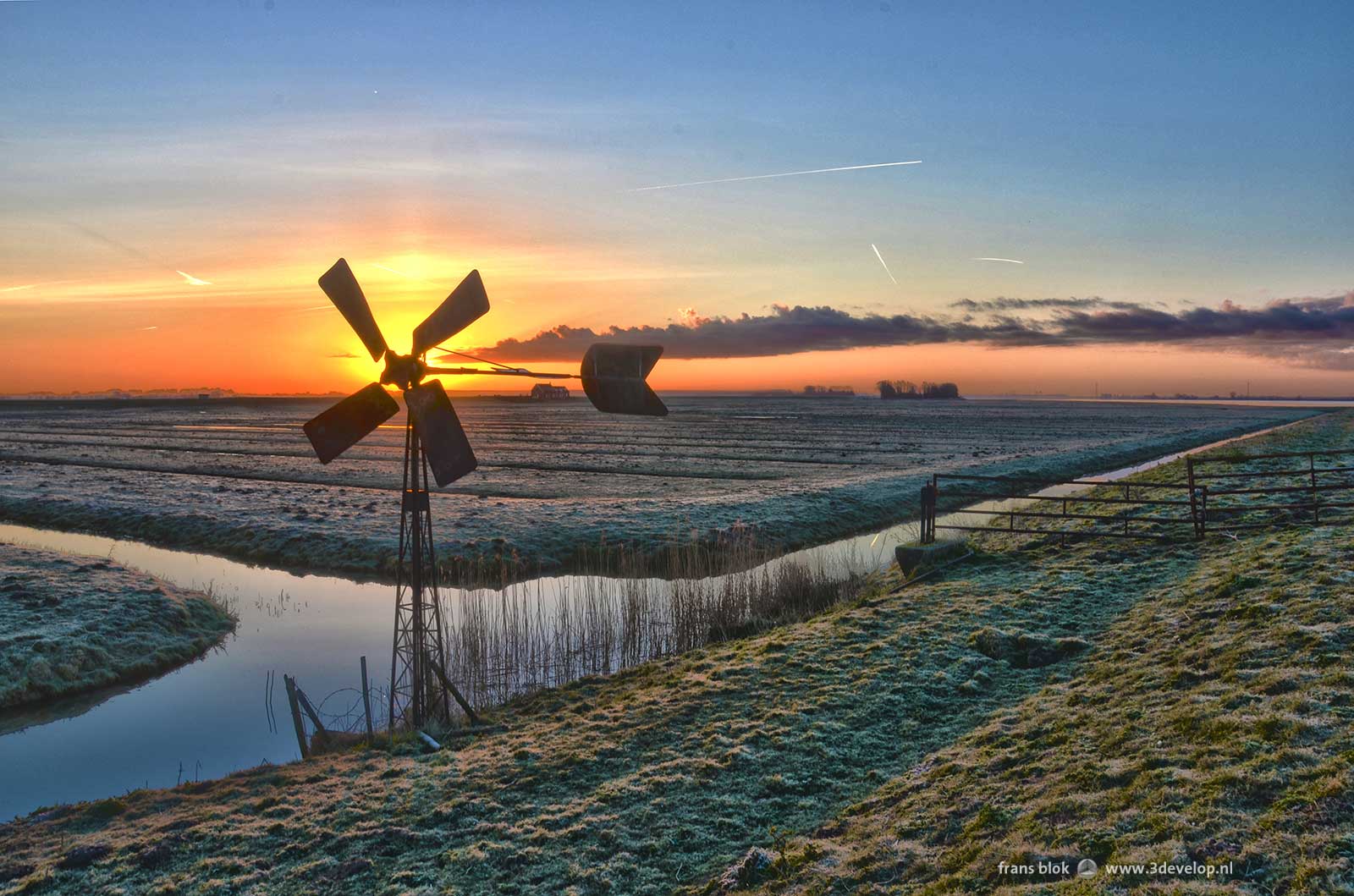 And when the Moon is full, it sets when the Sun comes up. That’s just a logical consequence of the fact that the Moon does not emit light but is illuminated by the Sun. As a result one doesn’t know where to look: sunrise or moonset. 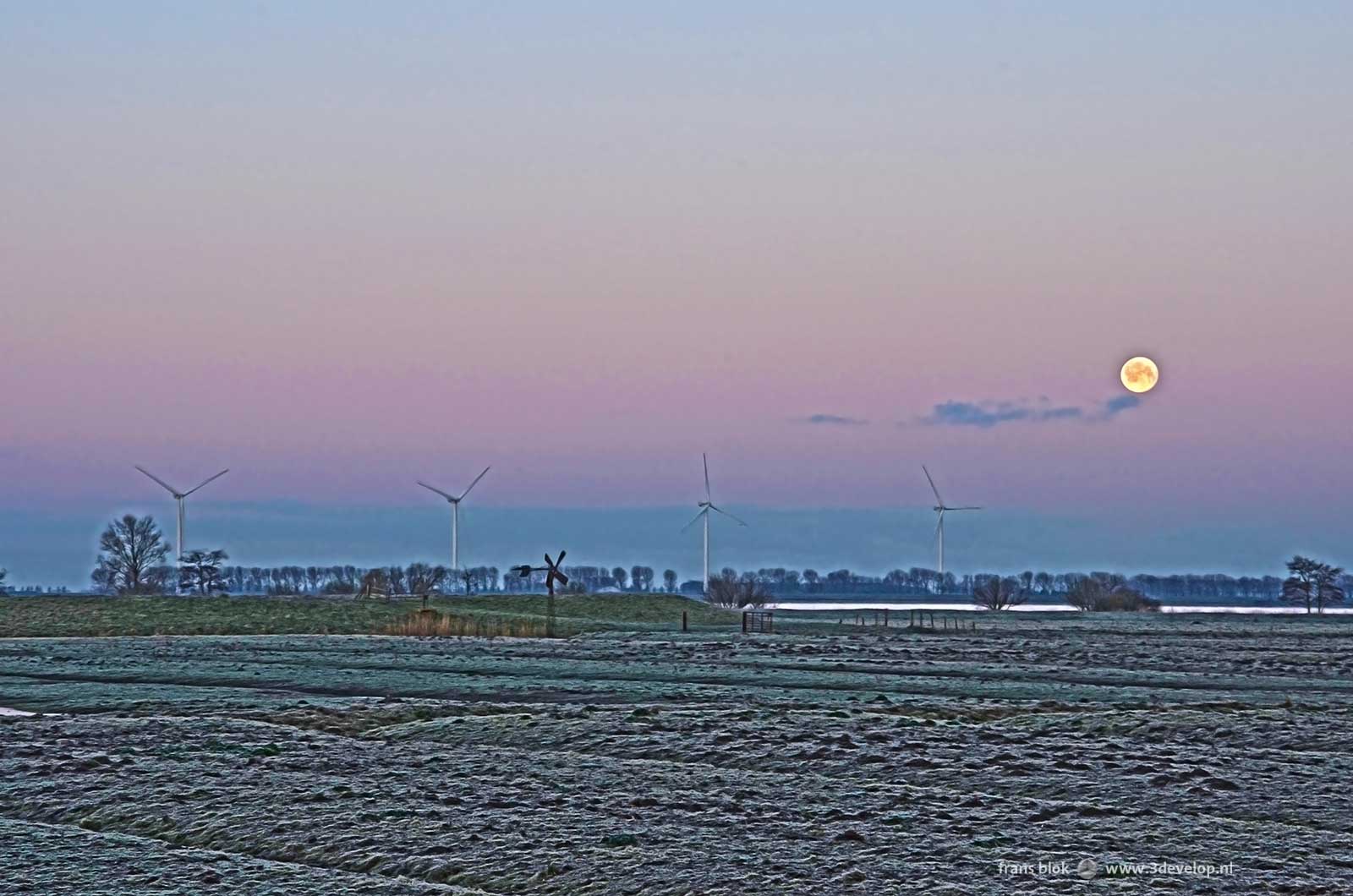 3. There was no wind at all

The storms of the previous week had died down. And Haringvliet, even though being a large expanse of water, was like a mirror. 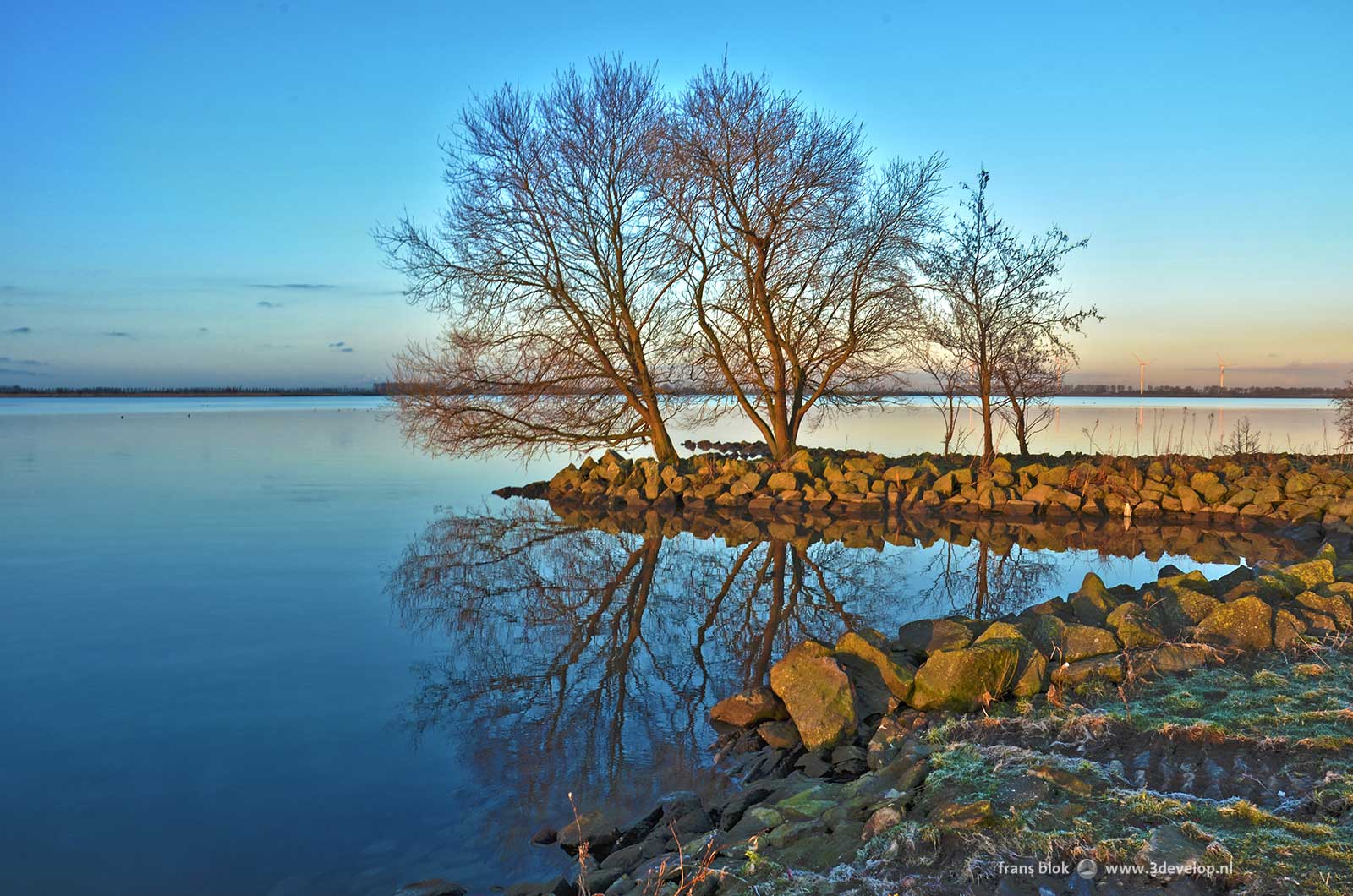 4. It was freezing cold

The cloudless sky had caused the night temperatures to drop below zero. Windshields had to be scratched like never before this winter. The frost on the fields and thin layer of ice on ponds and ditches made the wetlands look even better: 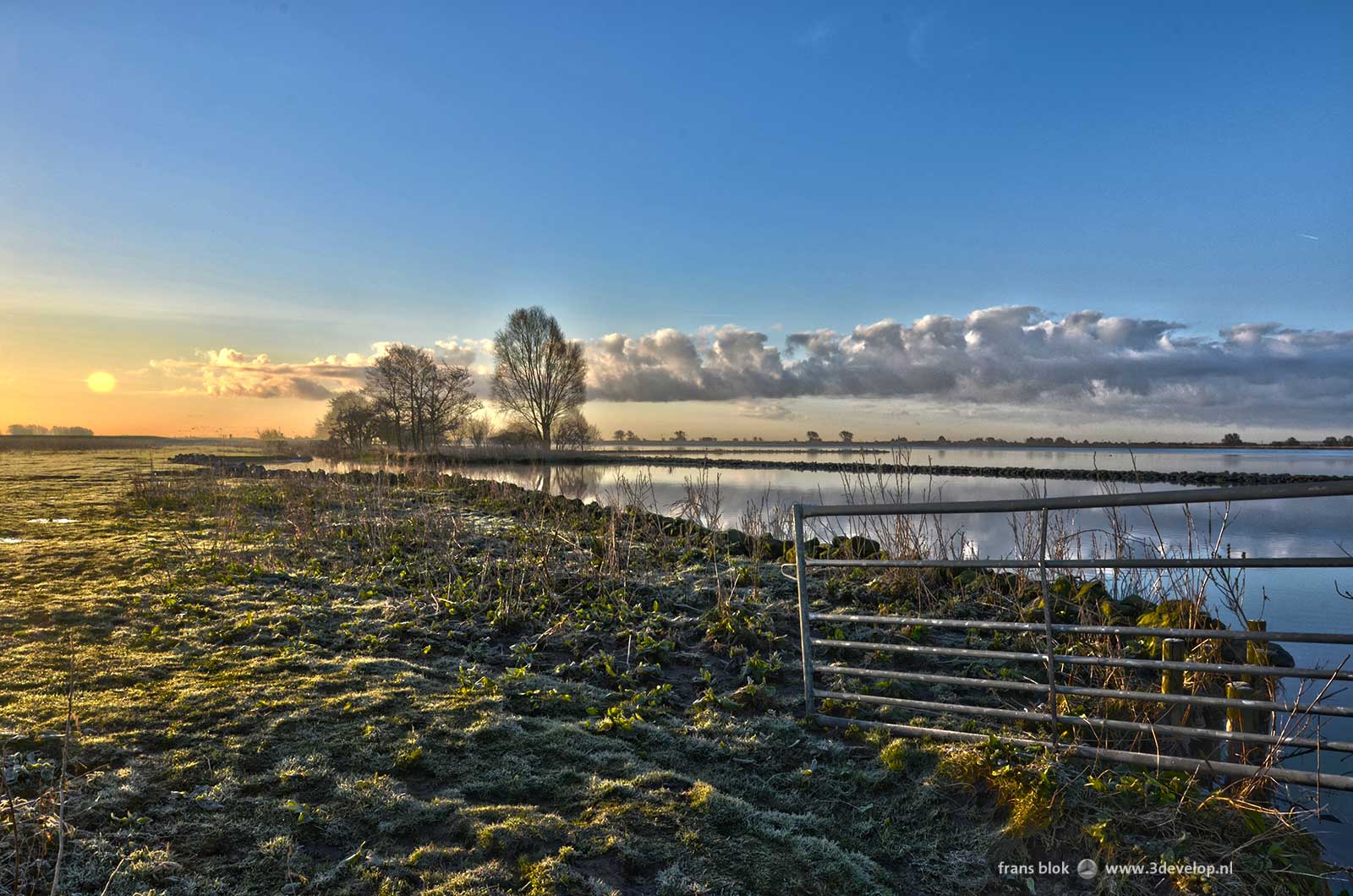 In contrast to the island of Tiengemeten, on the other side of Haringvliet, also owned by Natuurmonumenten, in the Korendijk wetlands the agricultural history can still be recognized in the form of ditches, fences and windmills.

Seeing the rare bluethroat had been the main purpose of the tour and under the expert guidance of guide Rob, we definitely reached that target. We also saw some deer, harriers, larks and common linnets (also the name of the successful Dutch eurovision song contest entry for 2014, by the way). And further, the wetlands are a haven for thousands of geese.

However, making close-ups of birds is a separate branch of photography, requiring equipment that I don’t have, so I’ll leave it at an overview shot of a flock of geese: 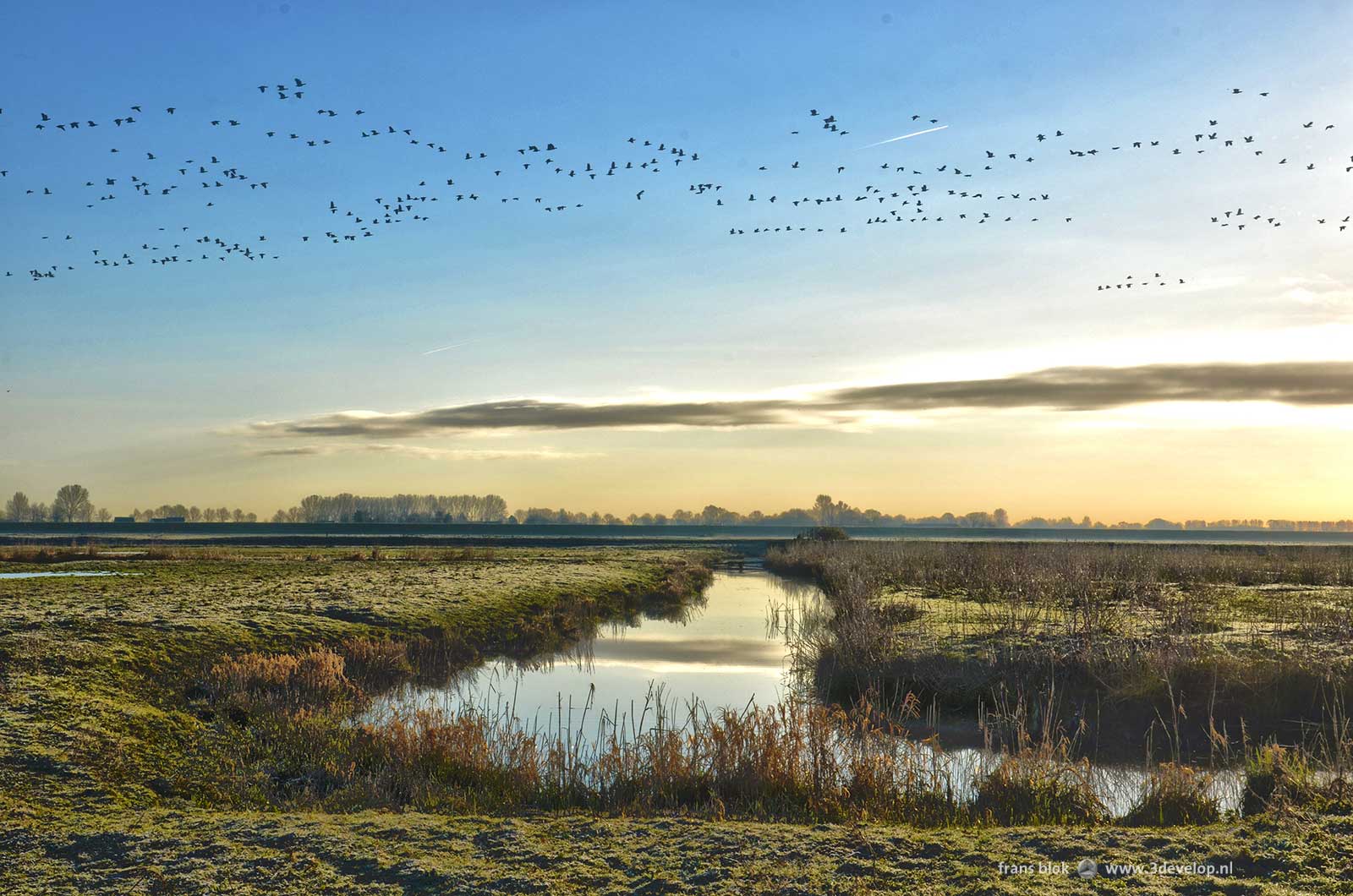 On Easter Monday the cloud cover had returned. On that day the conditions for bird spotting were probably not less favorable, but the circumstances were, I assume, less glamorous than during our trip. Sometimes all you need is a little luck.

UPDATE: some of the photographs made at Easter in the Korendijk wetlands are now available in my online galery at Fine Art America.