For many years, Google Earth has been my favorite product by the company from California. Okay, the search engine is also very useful. But it remains priceless to be able to travel in a matter of seconds from outer space to any place on Earth. Or on the Moon or Mars.

An unconvenient side effect however is that programs like Google Earth tend to fall victim to rapidly aging. It’s much more fun when the used satellite and aerial imagery, and the layer with the 3D buildings, are current. And lately Google didn’t really seem to do its best to keep things up to date.

Especially in the dynamic and rapidly changing city center of Rotterdam that became noticable. New icons such as “verical city” De Rotterdam and the Market Hall were missing. And the Central Station had been renewed, like in the real world, but they forgot to digitally take down the blue temporary station building.

So I was pleasantly surprised when I recently flew to Rotterdam again and saw that the 3D layer in a large part of the city had undergone a very thorough update. Even a more recent icon, the Timmerhuis, only half a year old, is there: 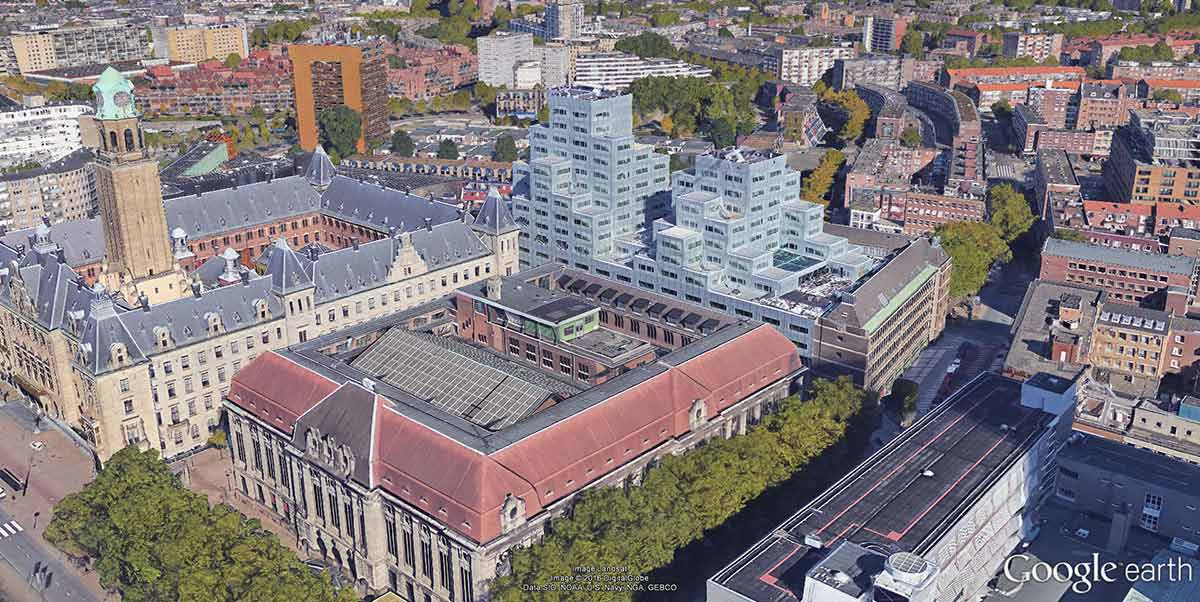 The 3D models are not put together by an army of modelers, but are automatically generated from a large number of aerial photos. That works out remarkably well: you should not get too close, but from a distance it looks amazingly lifelike. Even elements such as trees, ships and cranes are displayed properly.

The 3D layer is also available in Google Maps, a service that runs in your web browser and for which you don’t have to download Google Earth. So does Google Earth actually have added value next to Google Maps? Yes, for a lot of reasons, I’ll give you four. There are more, but these are my four favorite features in Google Earth.

It is possible to add polygons, or say surfaces, to the Google Earth database, and to give them a color and elevation. This offers, for example, the possibility to visualize what would happen when the sea level rises. This image shows the area around Market Hall with a rise of ten meters: 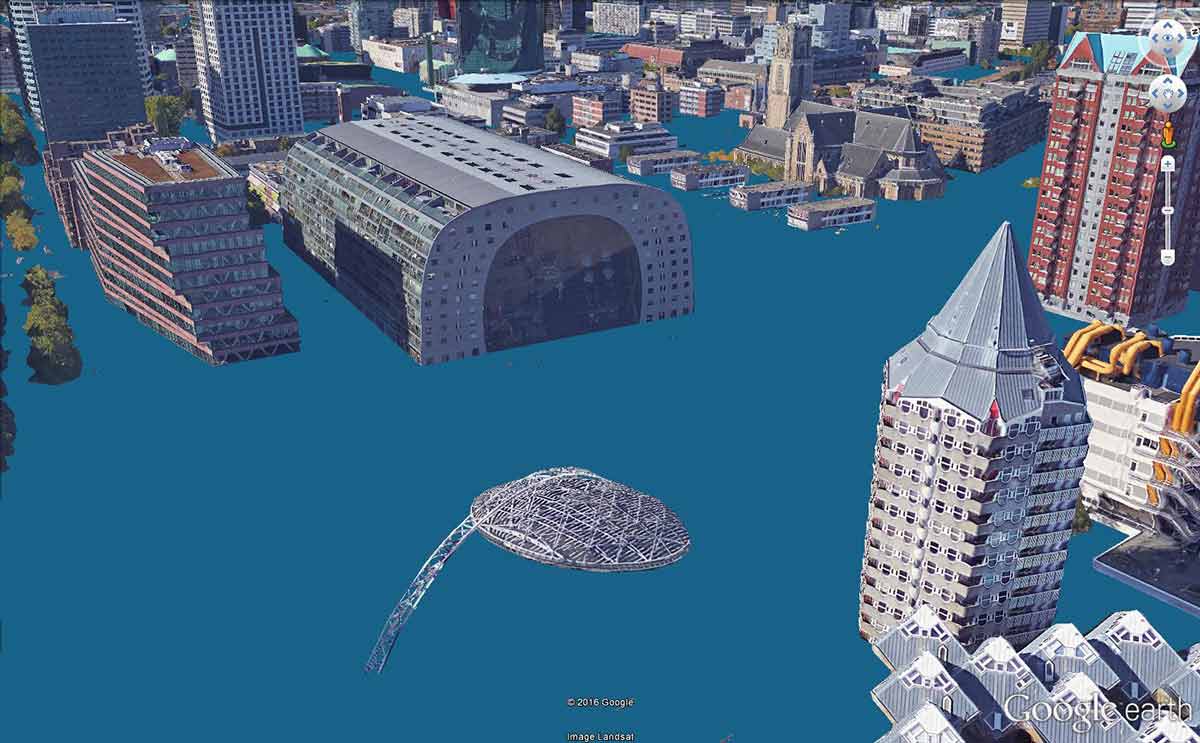 Of course it should be noted that in this situation, downtown Amsterdam would already best almost completely under water. In Rotterdam, the water can rise by dozens of meters more before everything is drowned. Not that that would be a good idea, of course.

Except polygons you can add photos or maps to Google Earth and play with their transparency. Here we see for instance the 1939 layer of my Double Street Map Rotterdam 1939-2016, superimposed on the current situation. In those days there was water between the Market Hall and the Cube Houses: the Kolk. Also Blaak was still water and Binnenrotte was much narrower than it is today: 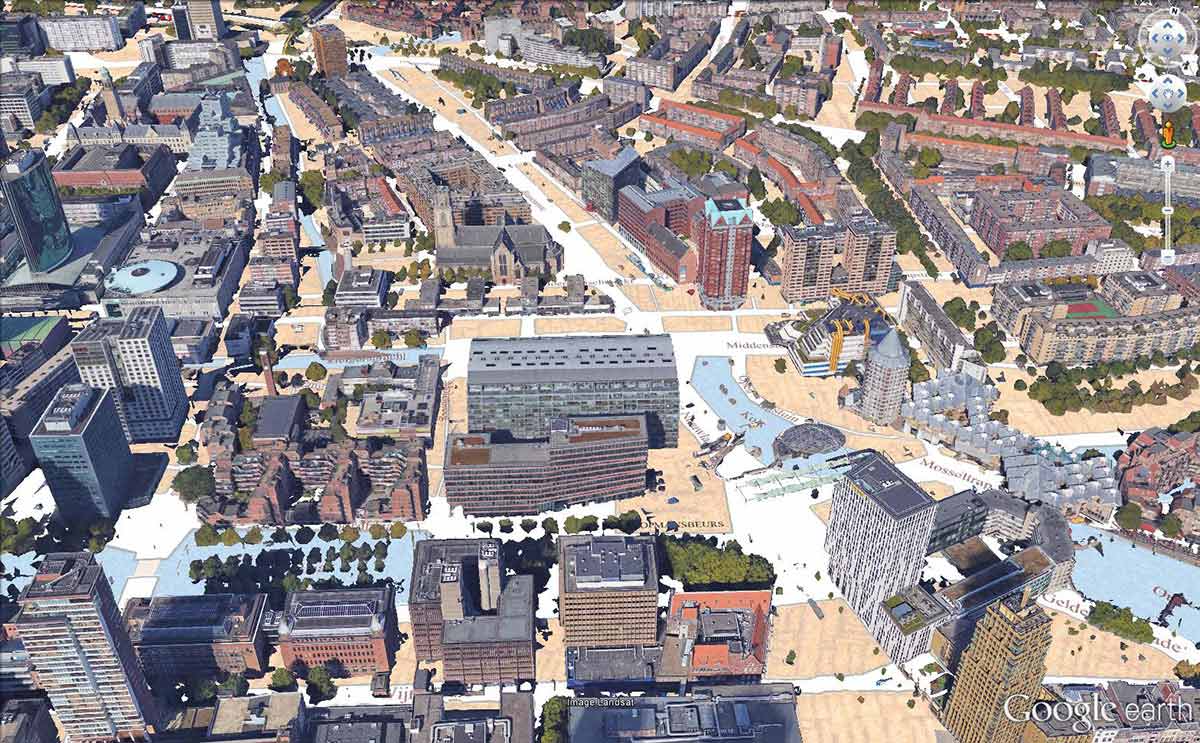 If you want to see it for yourself: here is the kmz file. It works, of course, only if you have Google Earth installed on your computer.

You can also place your own 3D models, or models from the 3D Warehouse, on the Google globe. Here is, for example, the old Bijenkorf department store by architect W.M Dudok, placed on its original site. As I showed in my Bijenkorf triptych, the building was in the middle of what is now Coolsingel, Westblaak and Churchill Square. 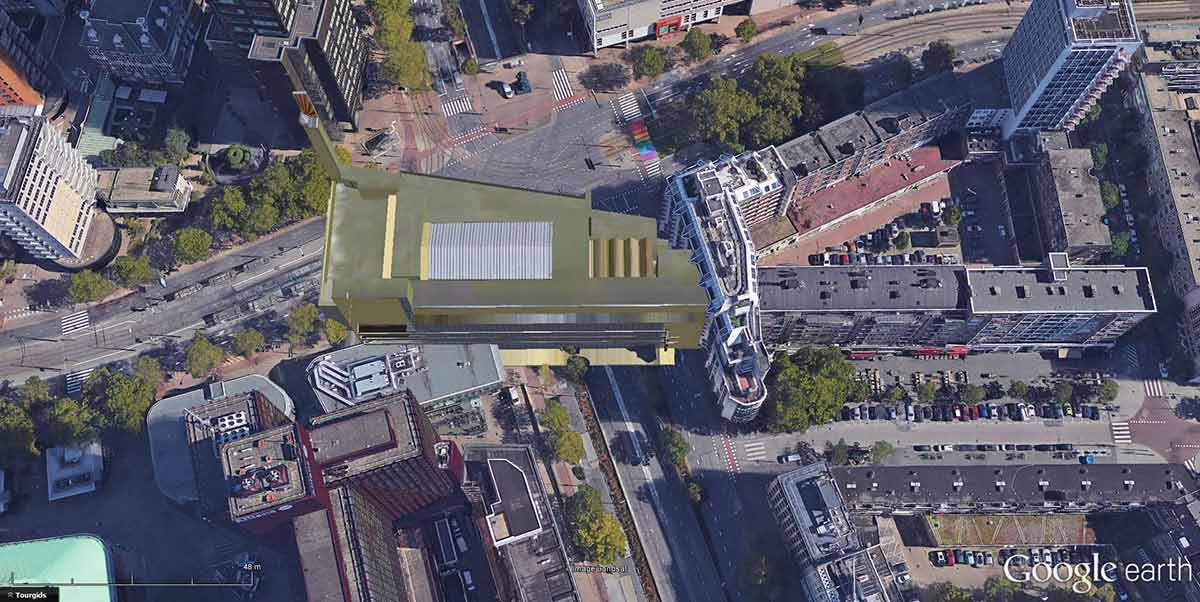 The model is made by Wouter van Faassen; my own 3d model is a bit too complex.

Finally, we have the flight simulator, found under the pull down menu extra, or by pressing Ctrl-Alt-A. There is a choice of only two aircraft, an F-16 and SR-22. But you have the world to fly over (or the Moon and Mars). Steering is done with the mouse or the arrow keys on the keyboard.

It is not so easy to keep course and certainly not to land on, for example, Zestienhoven, or let’s call it Rotterdam The Hague Airport. Not even mentioning a stunt flight under the Erasmus Bridge. But fortunately, the statement “Your plane has crashed” always has the option resume flight. 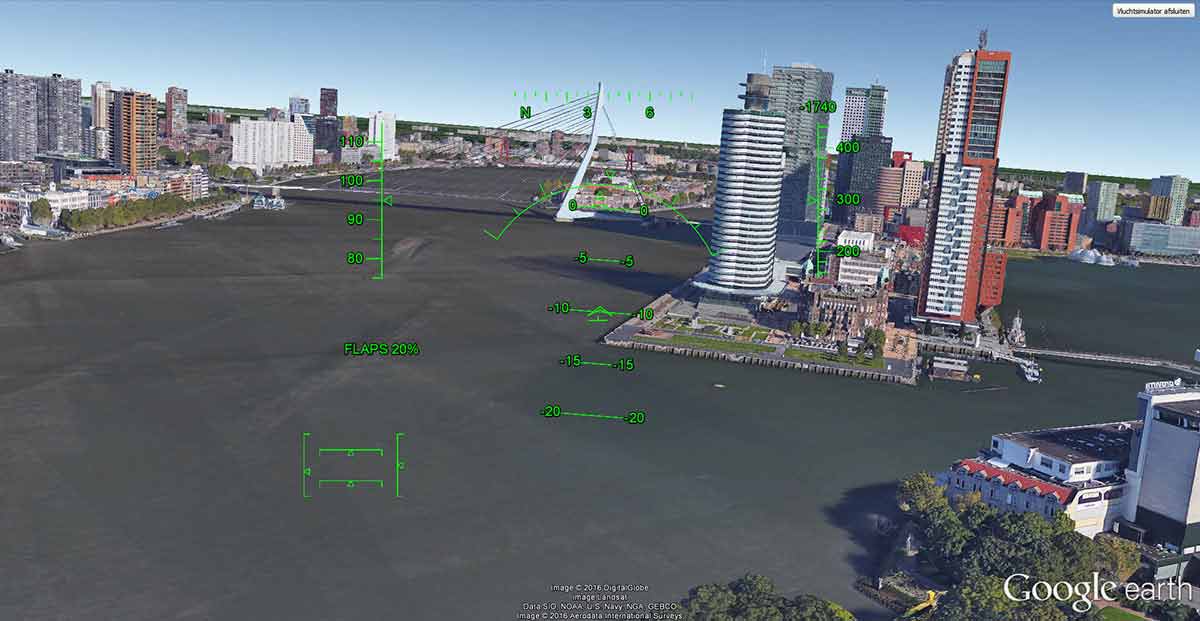