More or less at the same time, I finished the work on two new world maps. Two maps with a totally different look and feel, and created in rather different ways. They have, however, one thing in common: when I started, I expected to finish them in one or two days, but it took weeks before I was completely satisfied about them.

Below you see me working with a spray can to put the finishing touches on map no. 1: the graffiti world map: 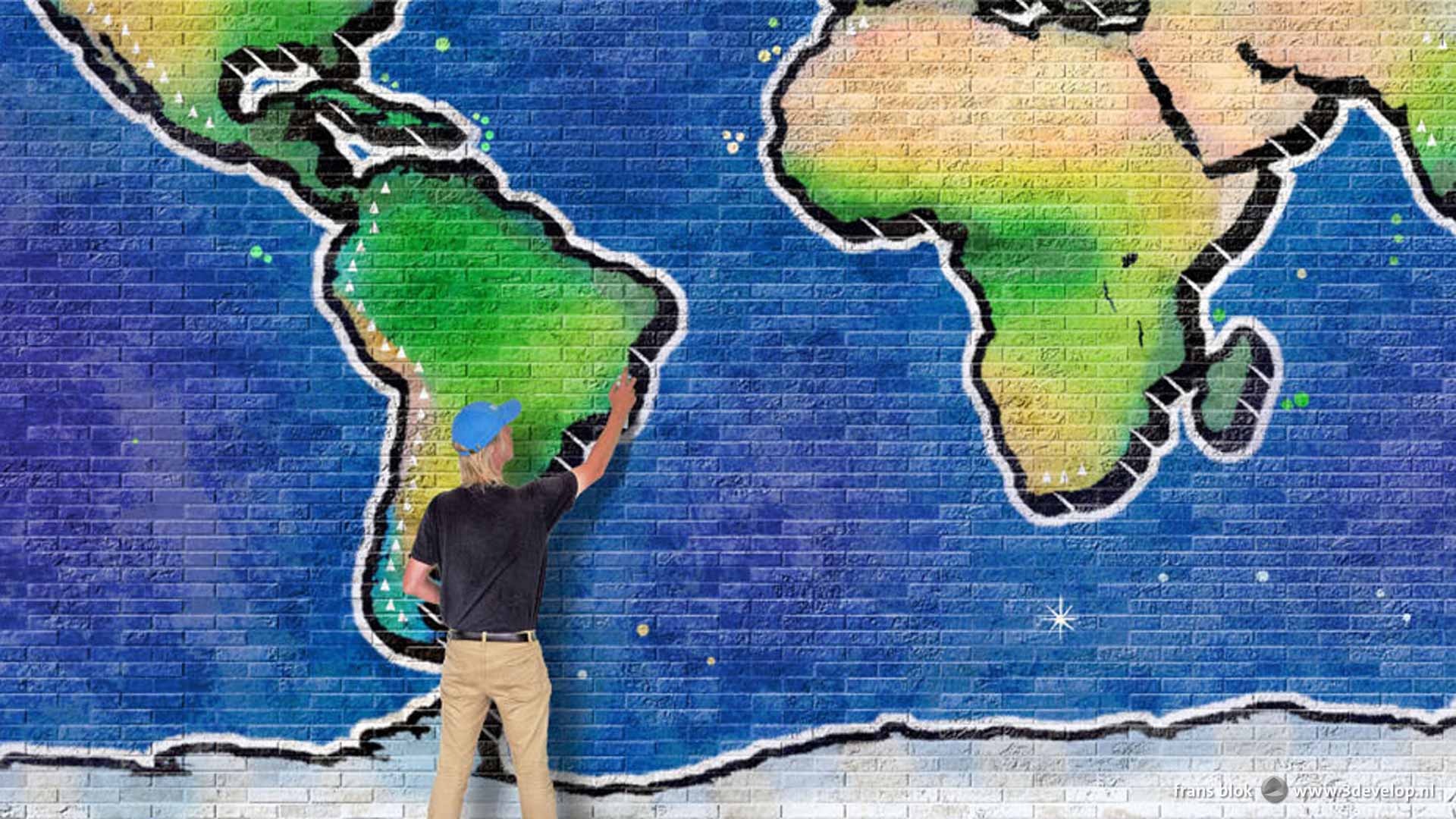 The picture is, of course, fake news, just like the whole piece of street art is virtual. The map is made entirely in Photoshop. In reality, it would cover a wall of ten by five meters. 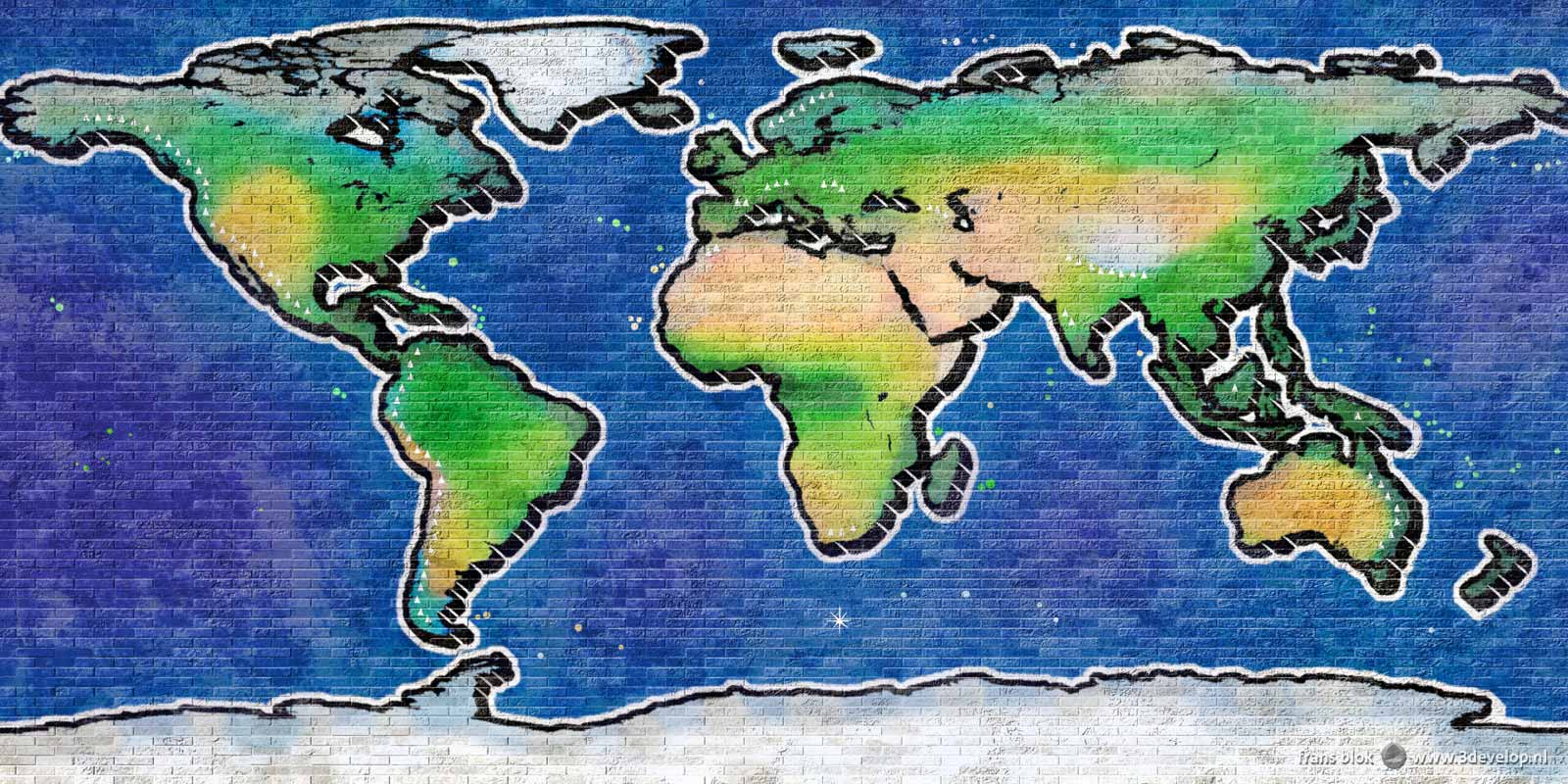 It is particularly unfortunate that street art connoisseur Herman Roelofs, alias @Feyenoordherbie, alias ROE, alias Herminator, will never see this map. Herman was my colleague at VHP for many years. In recent years he made his name as an expert and photographer of graffiti. He traveled all over the place to capture new pieces and he knew many street artists personally. He taught me to see graffiti in a different way.

I’m curious what Herman would have thought of this world map (I suspect something like: nice try, BLO, but now take a real wall …) Anyway, you can not completely exclude the possibility that he’s on a cloud somewhere, listening to Springsteen and giving it a like on an afterlife version of Facebook. I certainly hope so. 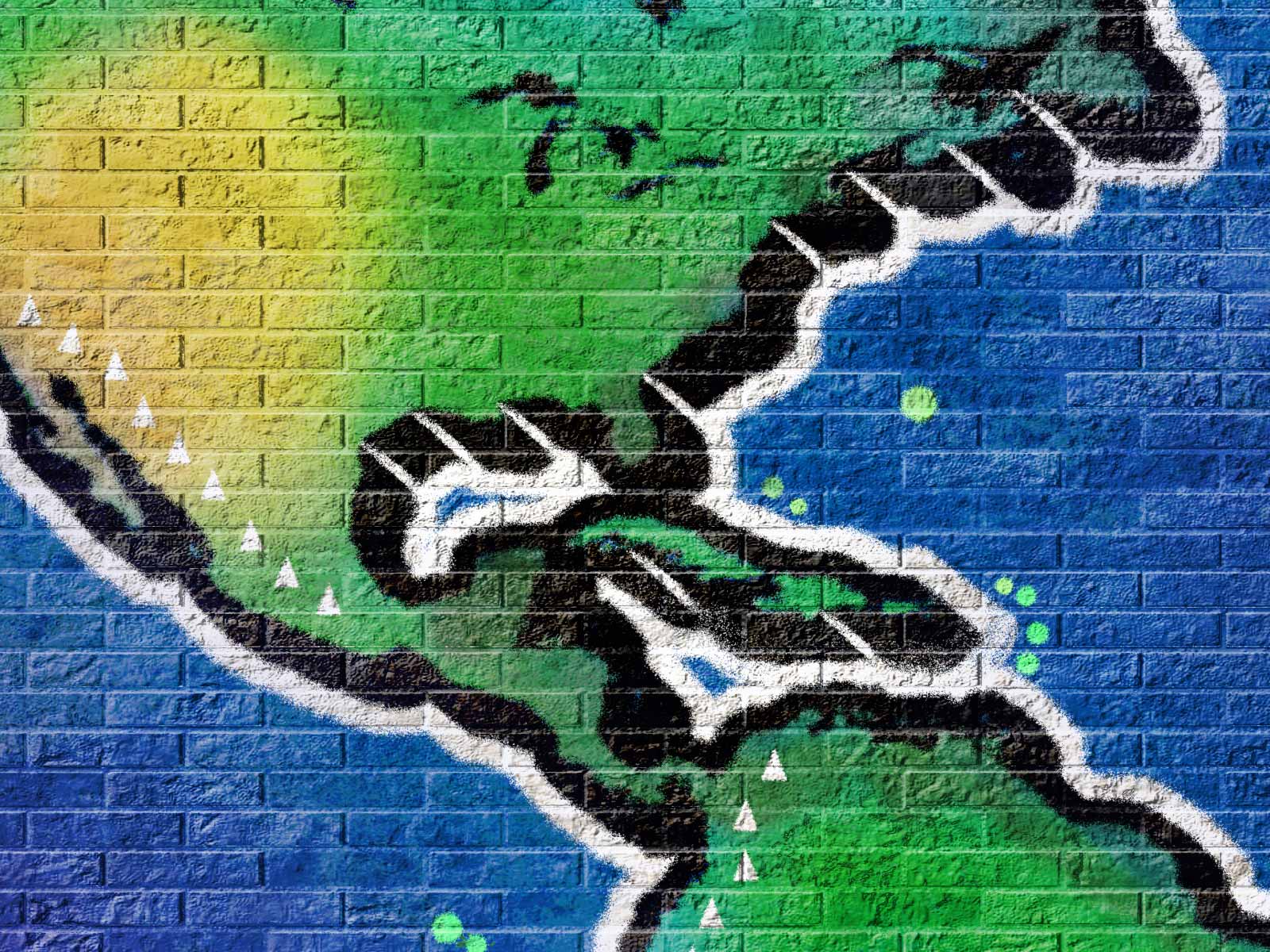 And now for something completely different: the coffee beans world map, shown below. A tribute to one of my favorite drinks; presumably also the favorite of around 80% of the world’s population. 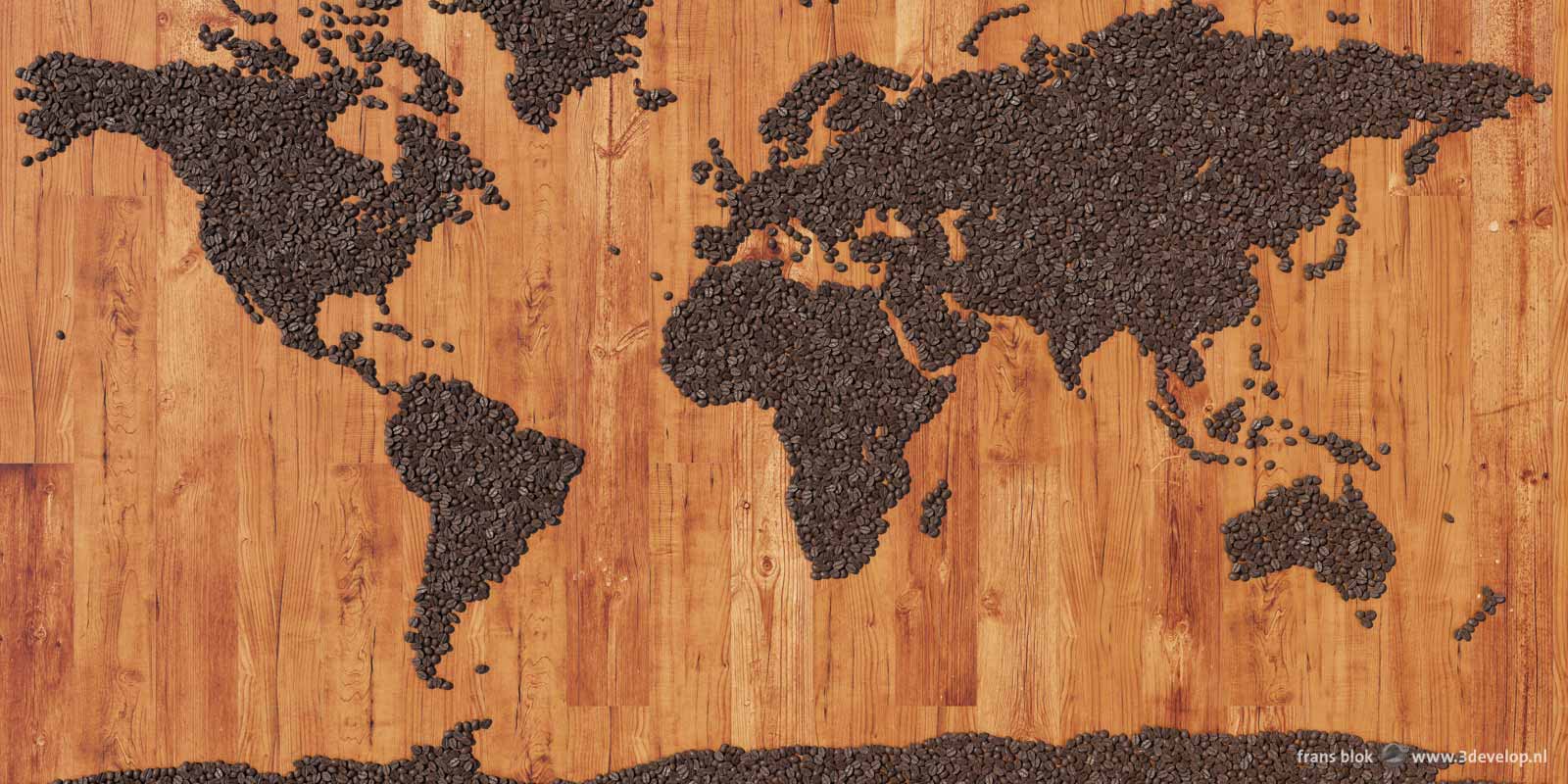 On this map, the continents are formed by 7614 coffee beans (yes, I counted them!), carefully arranged on a wooden table top. Also these beans are, of course, not real: coffee beans lose their taste quite quickly if they are out of the package and that would be a shame, wouldn’t it?

These beans were modeled in AutoCAD and then positioned and rendered in 3ds max. I got some help from a plug-in called Forest Pack. Like it’s name suggests, it’s actually intended for visualization of forests and other biotopes, but also suitable for this specific job.

Unfortunately, with Forest Pack, I could not get everything exactly right. In the end, I was still pushing beans for many hours. I was planning to make a series: the World, Europe, the Netherlands, Rotterdam. But I’ll take a break and wait how this world map is received. 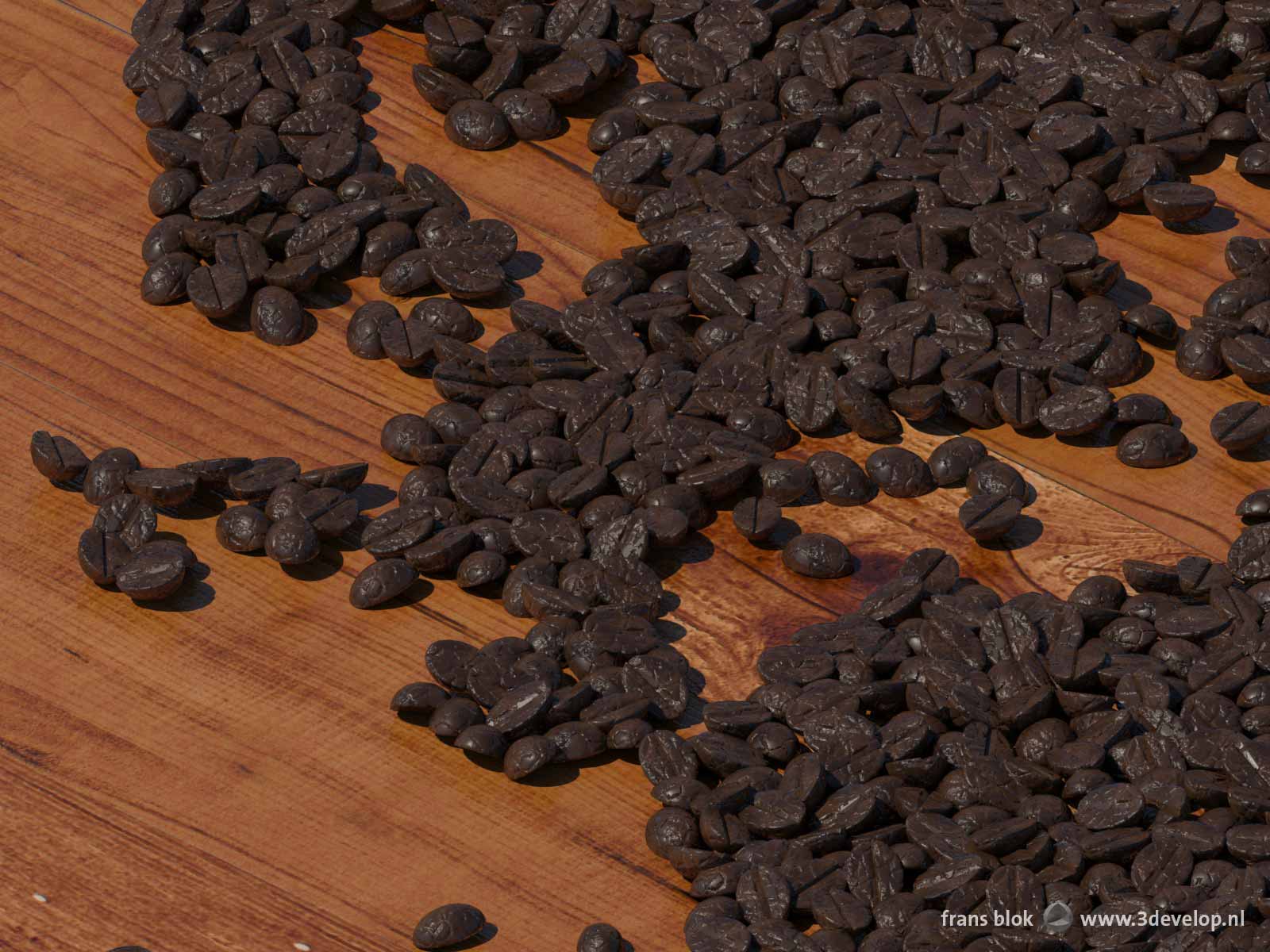 Never has there been a more perfect image to print on a coffee mug than this world map. So here it is: the Coffee Beans World Map Coffee Mug, for sale at my Pixels.com webshop. Click on the mug for more information.