Liquidambar Styraciflua, in Other Words: the Sweet Gum Tree

Oddly enough, I never really noticed them until the autumn of last year and now I suddenly see them everywhere: sweet gum trees or liquidambar styraciflua. Time for a photographic tribute to the mother of all autumn trees. 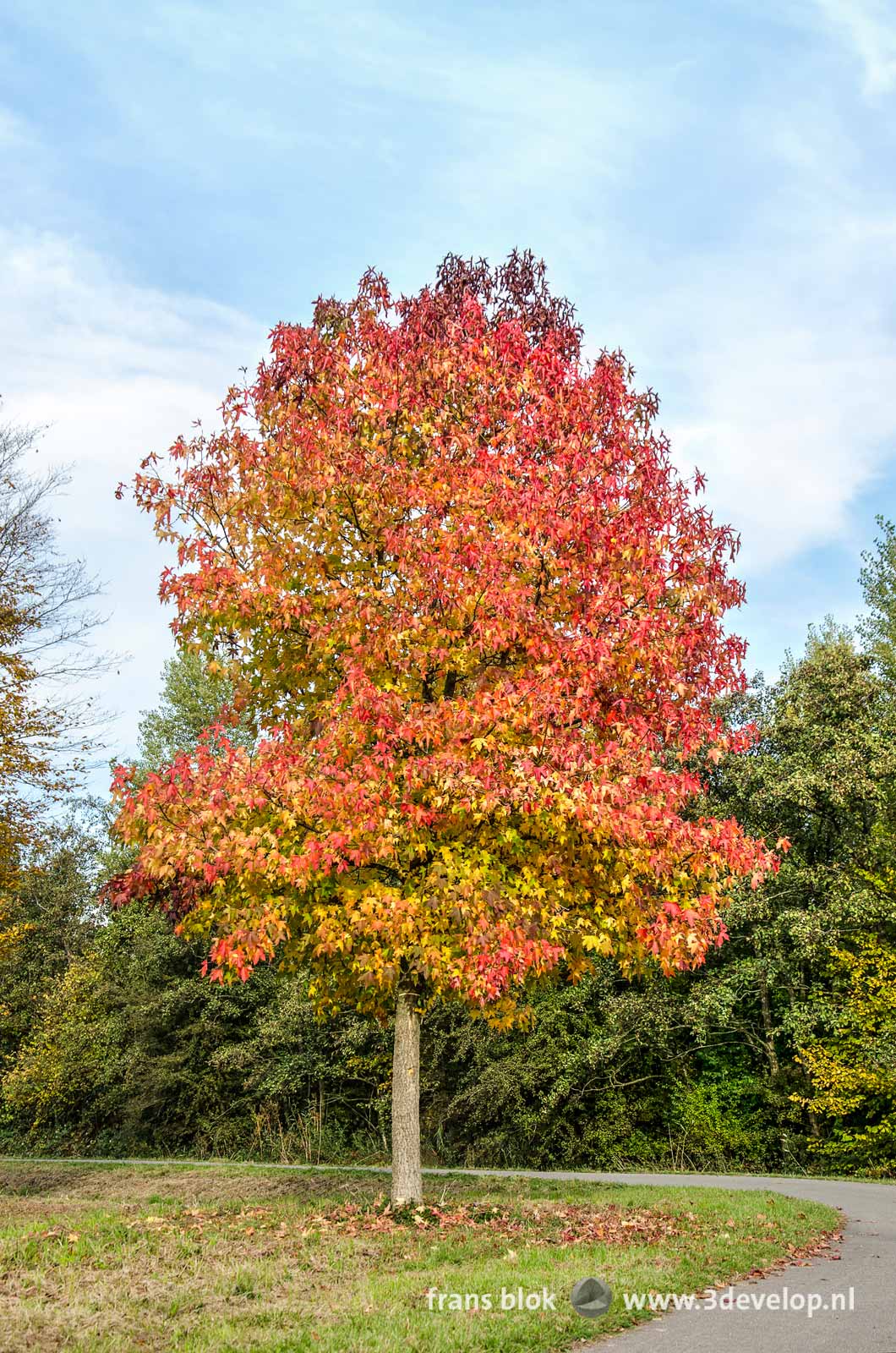 The amber tree originates from the southeast of the United States, roughly from the New York – Houston – Orlando triangle. In addition styraciflua grows in higher altitudes in Central America. 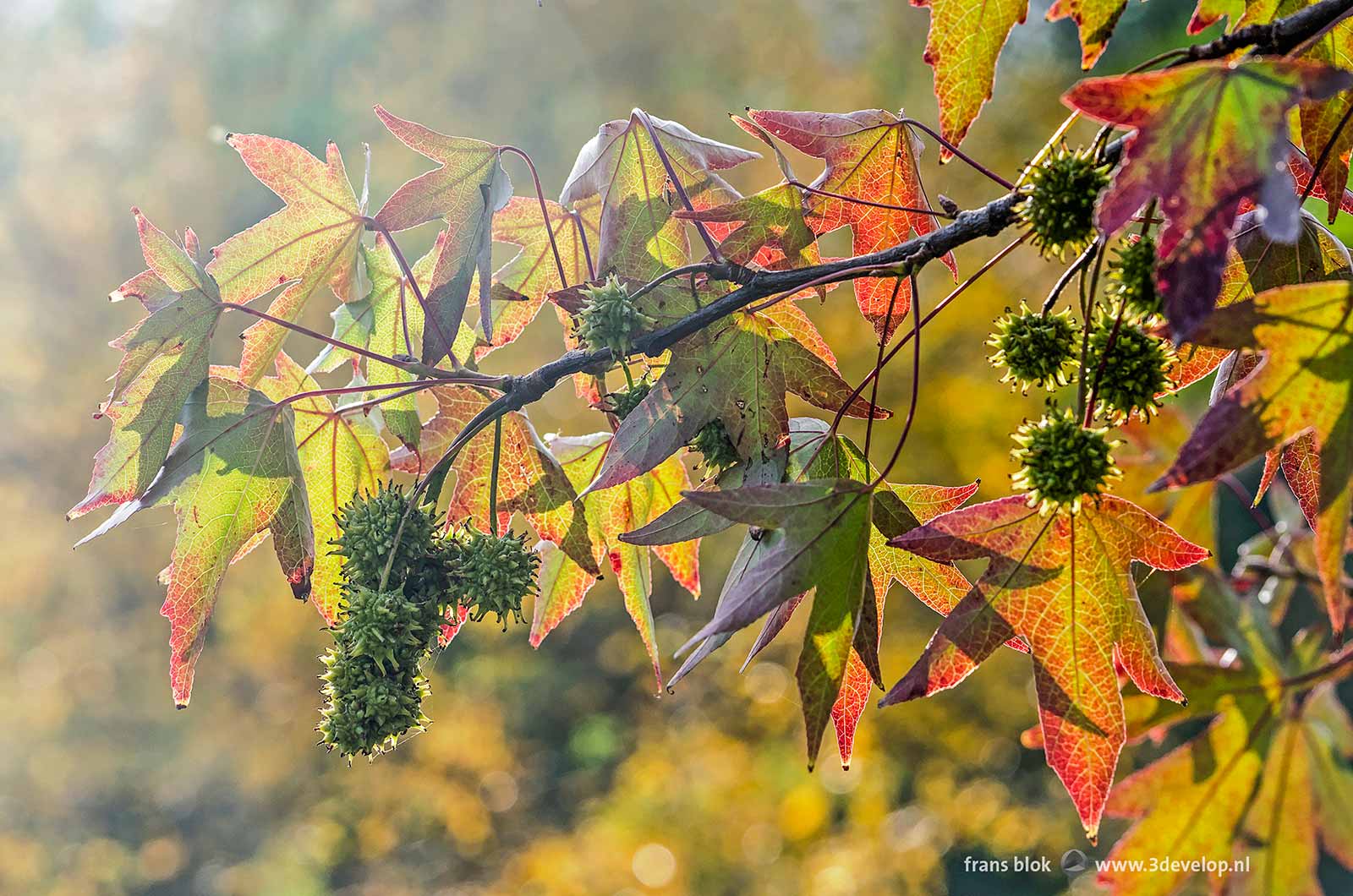 Google Translate incorrectly translates sweet gum tree into German as süßer Kaugummibaum which in turn translates as sweet chewing gum tree. Which reminds me of a song from my childhood about “my uncle’s chewing gum ball tree”. Perhaps the sweet gum tree, with its multi-colored leaves, has been the inspiration for that song. 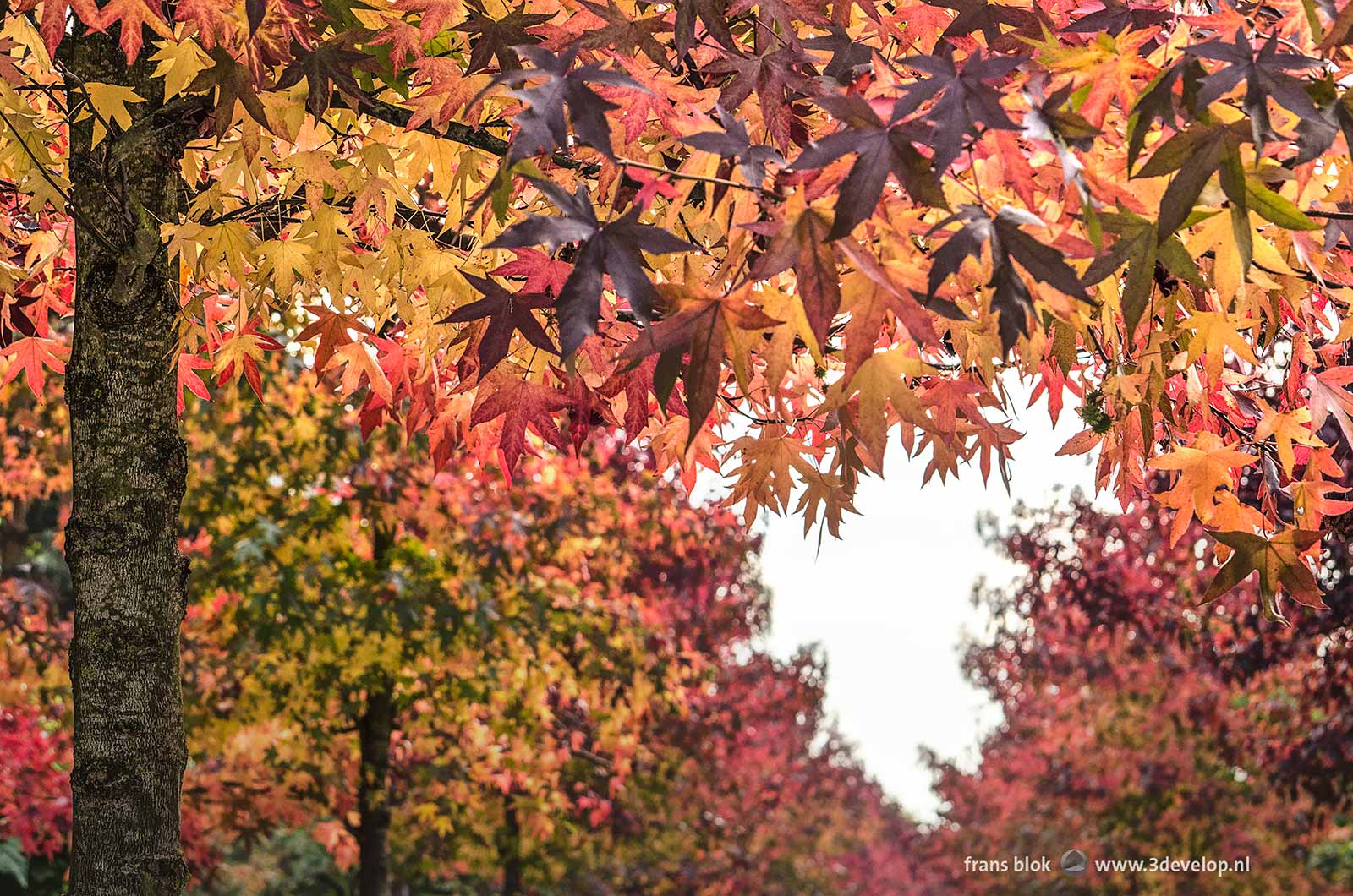 In the Netherlands one sees the sweet gum tree mainly in gardens and parks. Unfortunately, avenues and streets planted with rows of styracifluas are rare. But there are exceptions, such as the Rozenburglaan in the Rotterdam neighbourhood of Kralingen (photo above). And on this square in Rotterdam-West there are even three rows of them! 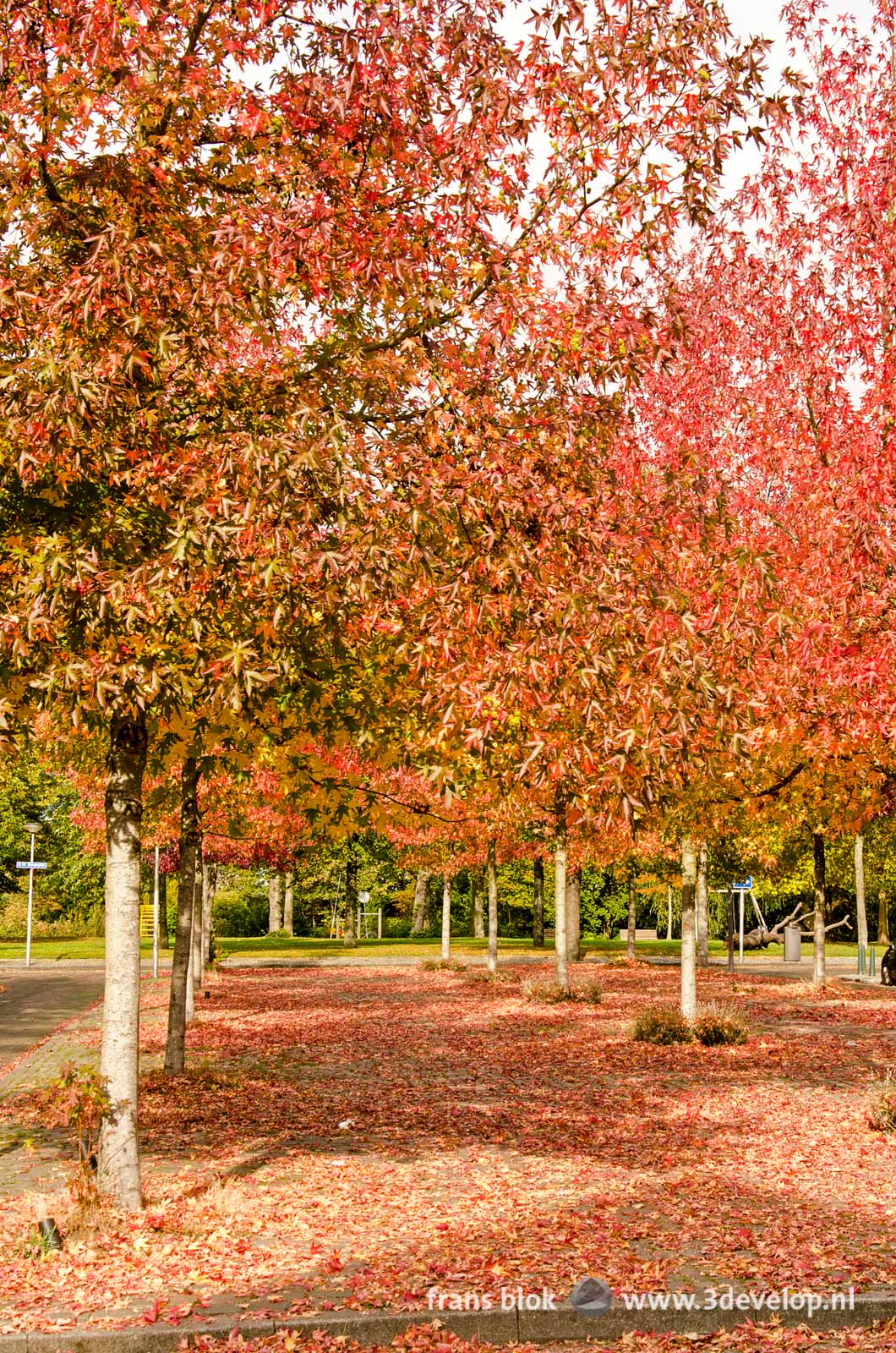 For most of the year, the sweetgum is a rather inconspicuous tree, but in the autumn it explodes in a psychedelic extravaganza in which almost every color seems possible: green, yellow, orange, red and even purple. 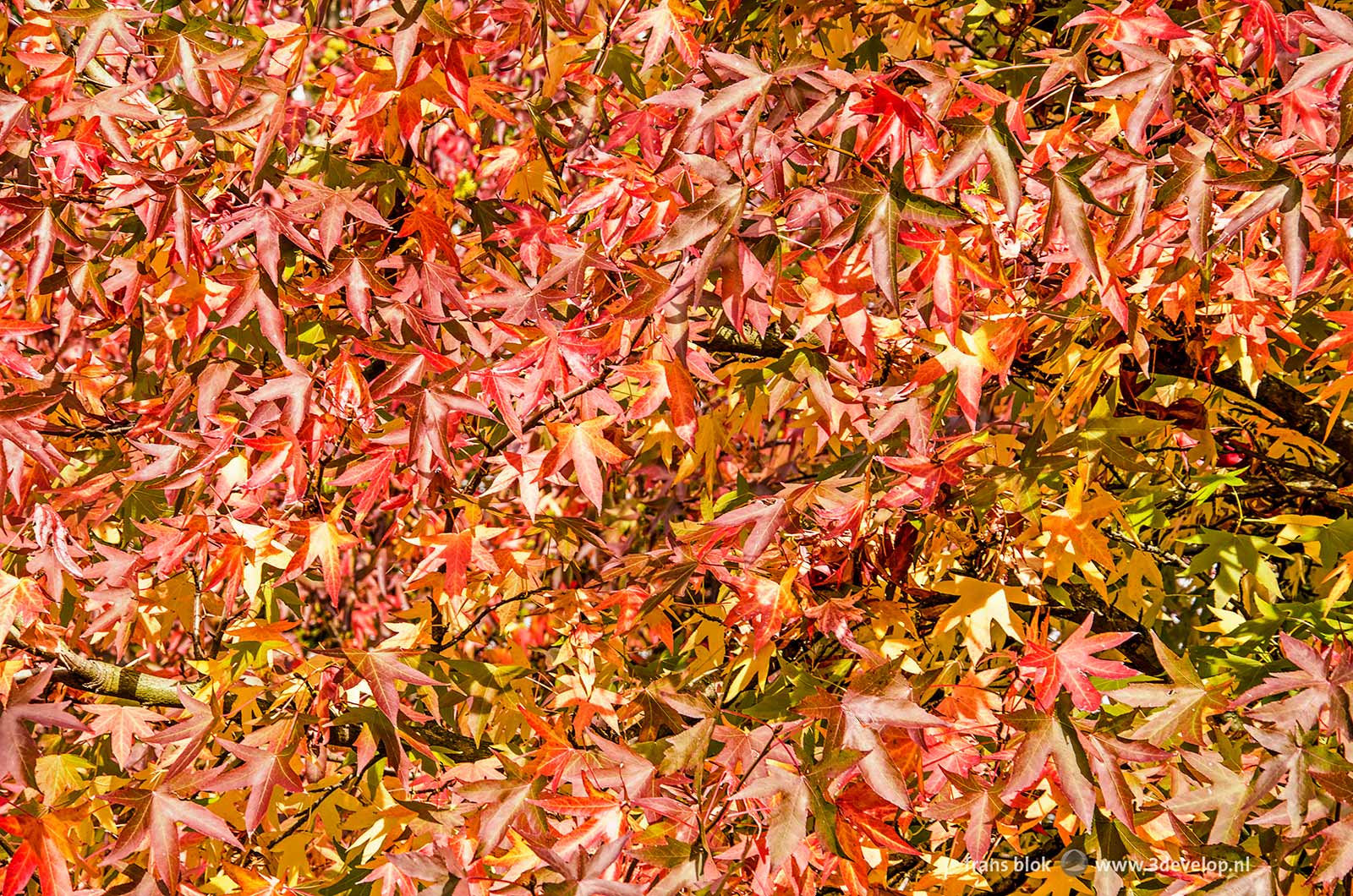 In addition to the five-pointed leaves, the sweet gum is easily recognized by the green spiky fruit balls. 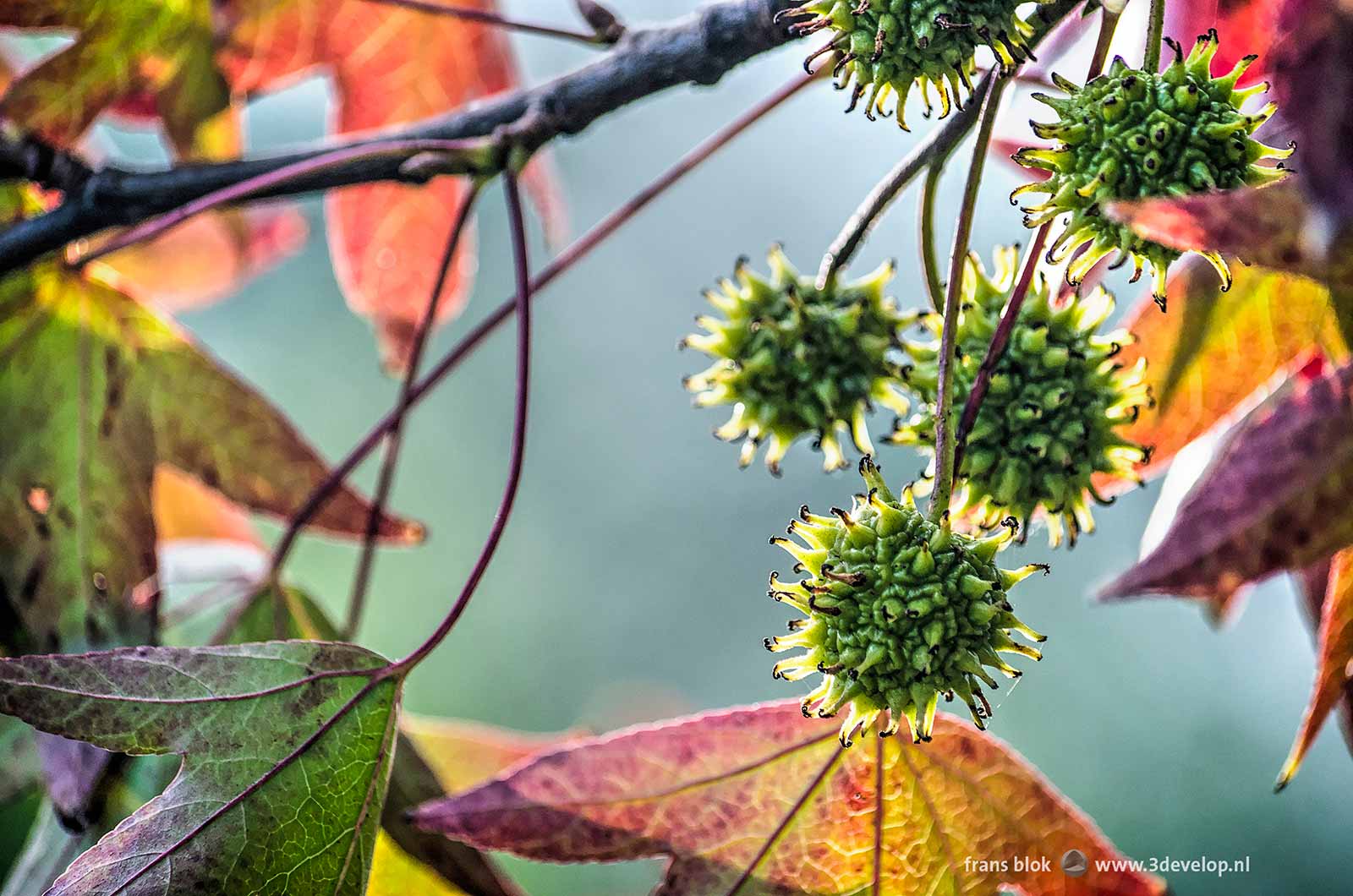 A sweet gum tree can reach a height of 45 meters, but here in the Netherlands I rarely see them higher than ten metres or so. Maybe that’s because most of them are in fact still saplings. But they can live for four hundred years, so that’s a promise for the future.

The largest sweet gum tree I know can be found in The Park in Rotterdam. It is not as high as the Euromast tower behind it; that is a case of perspective distortion. But it must be at least twenty metres high. 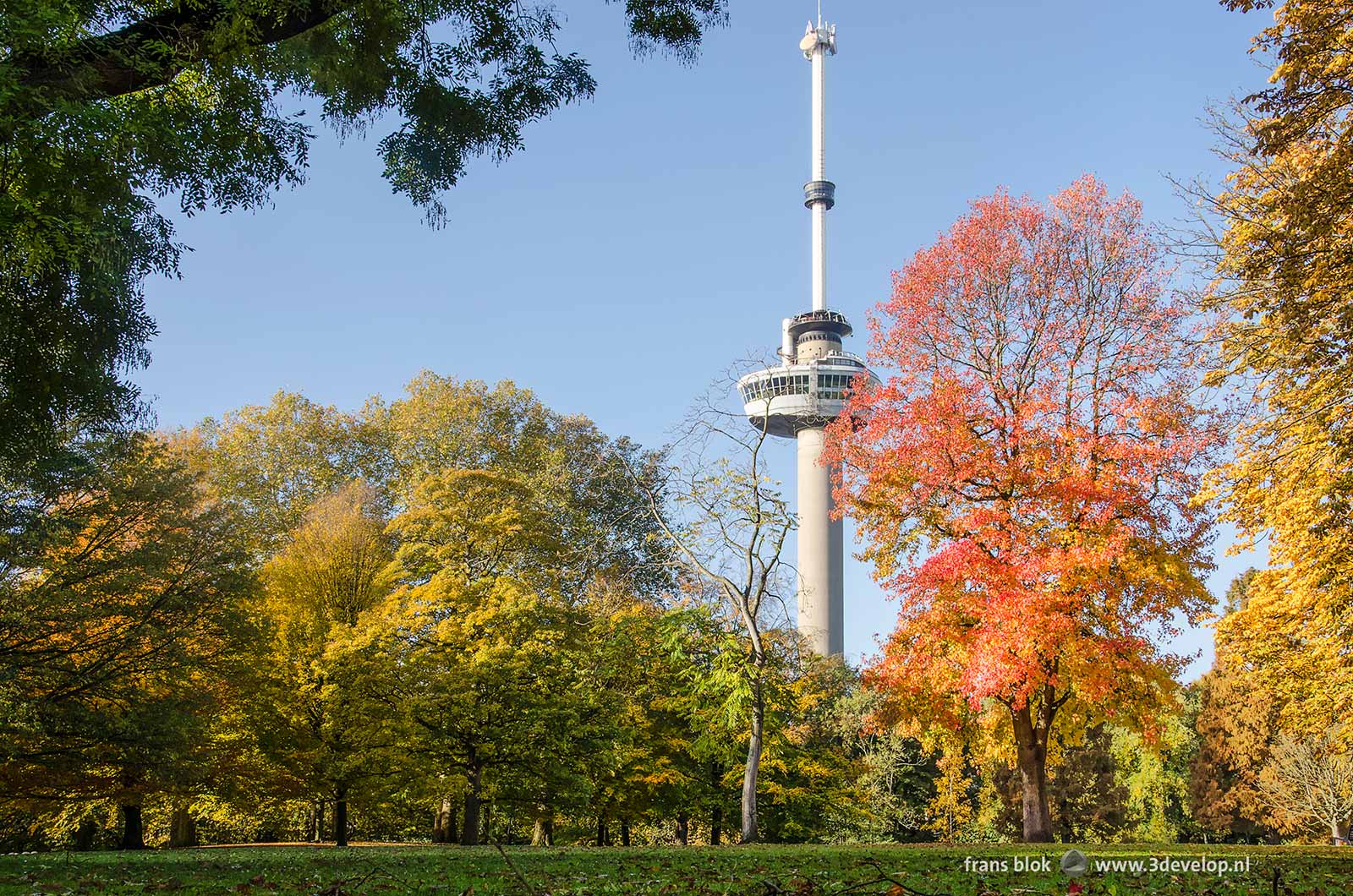 The official name Liquidambar Styraciflua was coined in 1753 by the legendary botanist Linnaeus. But what does the name mean? It appears to be connected with the pleasant smelling gum produced by the leaves, which can also be tapped from the bark. Liquidus is Latin for liquid, ambar is Arabic for gum, styrax is the resin of this specific family of trees. The English name sweet gum tree also refers to that sweet resin, which was traditionally appreciated by the native Americans.

In other words: the naming has nothing to do with the physical beauty of the tree, but with its inner qualities. However I must confess it’s that outer beauty that pleases me most. 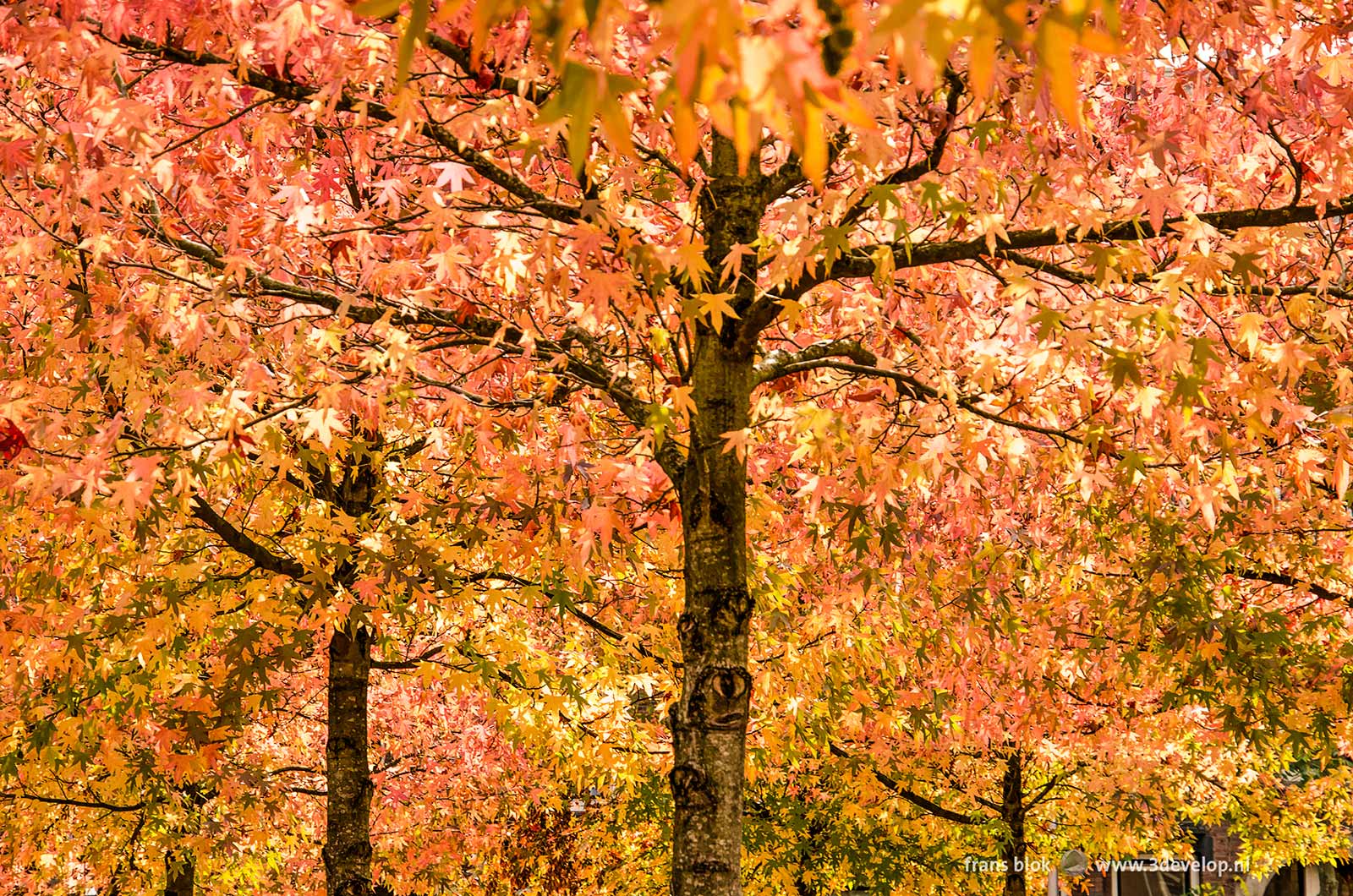