Looking Back at the Photographic Autumn of 2017

When does autumn begin and end? The answer depends on whether you ask an astronomer or a meteorologist.

The astronomical autumn begins with the autumn equinox, the moment that day and night, everywhere on Earth, have the same length. Autumn ends with the winter solstice, better known as the shortest day.

In 2017, autumn officially started on 22 September at 20.01 Central European Time; the end is scheduled for December 21, 16.18. Because the length of a year on our planet (and actually on almost every other planet) is not an exact number of days, the times are different every year.

For the meteorologists, that was too complicated; they therefore opted for a simpler classification: the meteorological autumn coincides with the months of September, October and November.

And when is the photographic autumn? In my opinion, it is more in line with the meteorological classification than with the astronomical one. At the beginning of September, the trees already start to show some discoloration, as shown in the photo above of the Scheepmakershaven in Rotterdam. And now, in early December, most trees have lost their leaves. Time to look back on this past autumn. 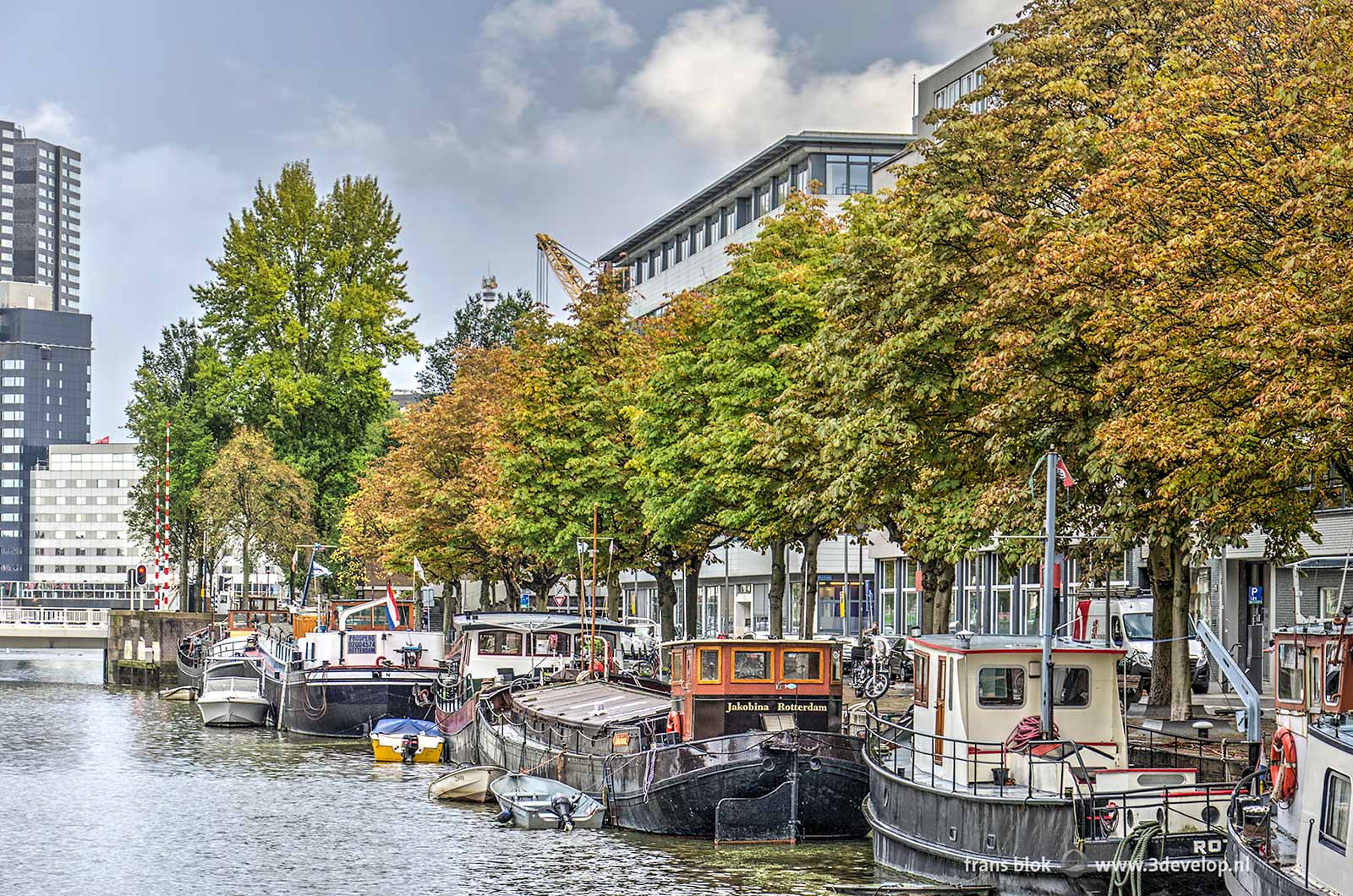 I’ll start with a science fact: when the temperature drops in autumn, the chlorophyll, which causes the green color of leaves, is broken down. As a result, other pigments become visible that were already there all the time: the carotenoids that provide the yellow and orange hues and anthocyanins that are responsible for the red. After the, photographically seen, somewhat dull summer, in which most trees have more or less the same green color, nature changes into a psychedelic color festival. 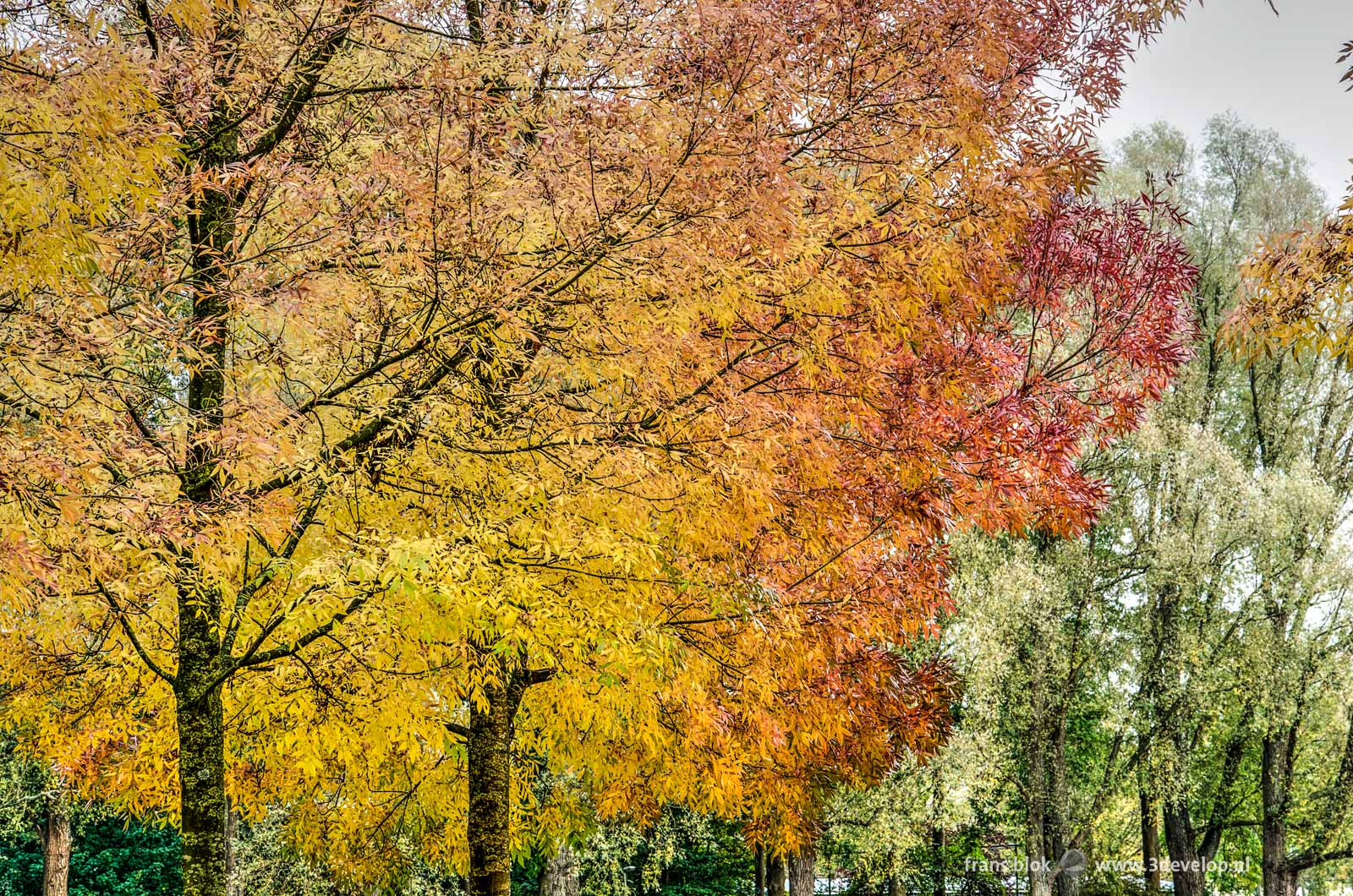 A tree that I, strangely enough, only really discovered this fall is the Liquidambar Styraciflua. Actually a kind of autumn magnolia: rather inconspicuous for most of the year, but for a few weeks it’s the most beautiful girl in the class. The tree originates from North America and is known there under a lot of different names: American sweetgum, American storax, hazel pine, bilted, redgum, satin-walnut, star-leaved gum and alligatorwood.

The combination of red cannabis-shaped leaves and green spiky fruits makes this tree extremely photogenic, especially against a blue sky. 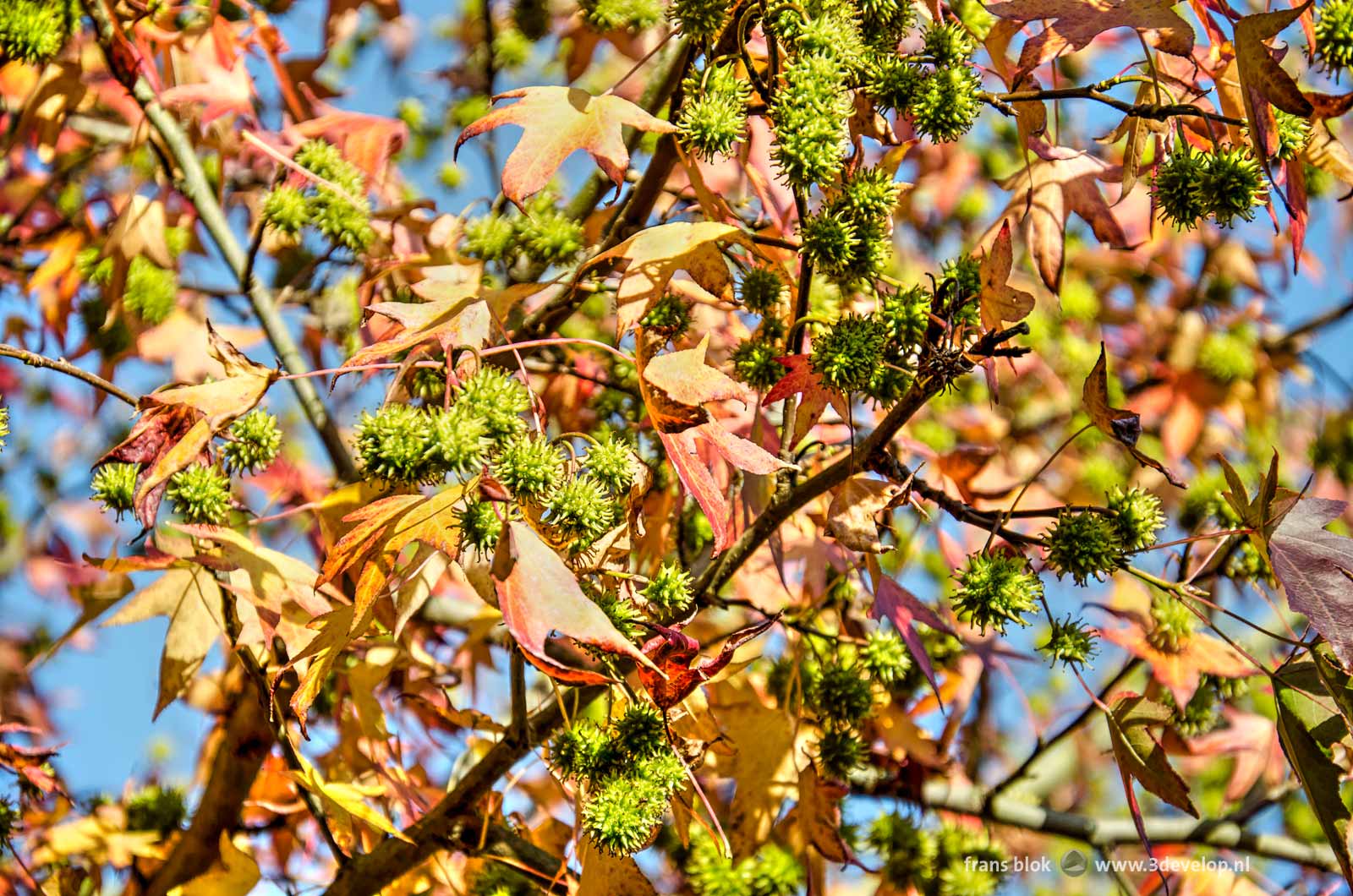 When taking a photograph it’s wise to not only pay attention to the subject itself, but also to the background. Of course that is always true, but during the autumn one can search for combinations of contrasting colors that almost seem unreal. Chances are you’ll get the comment that it is photoshopped, but no, in the autumn nature is really that wild. 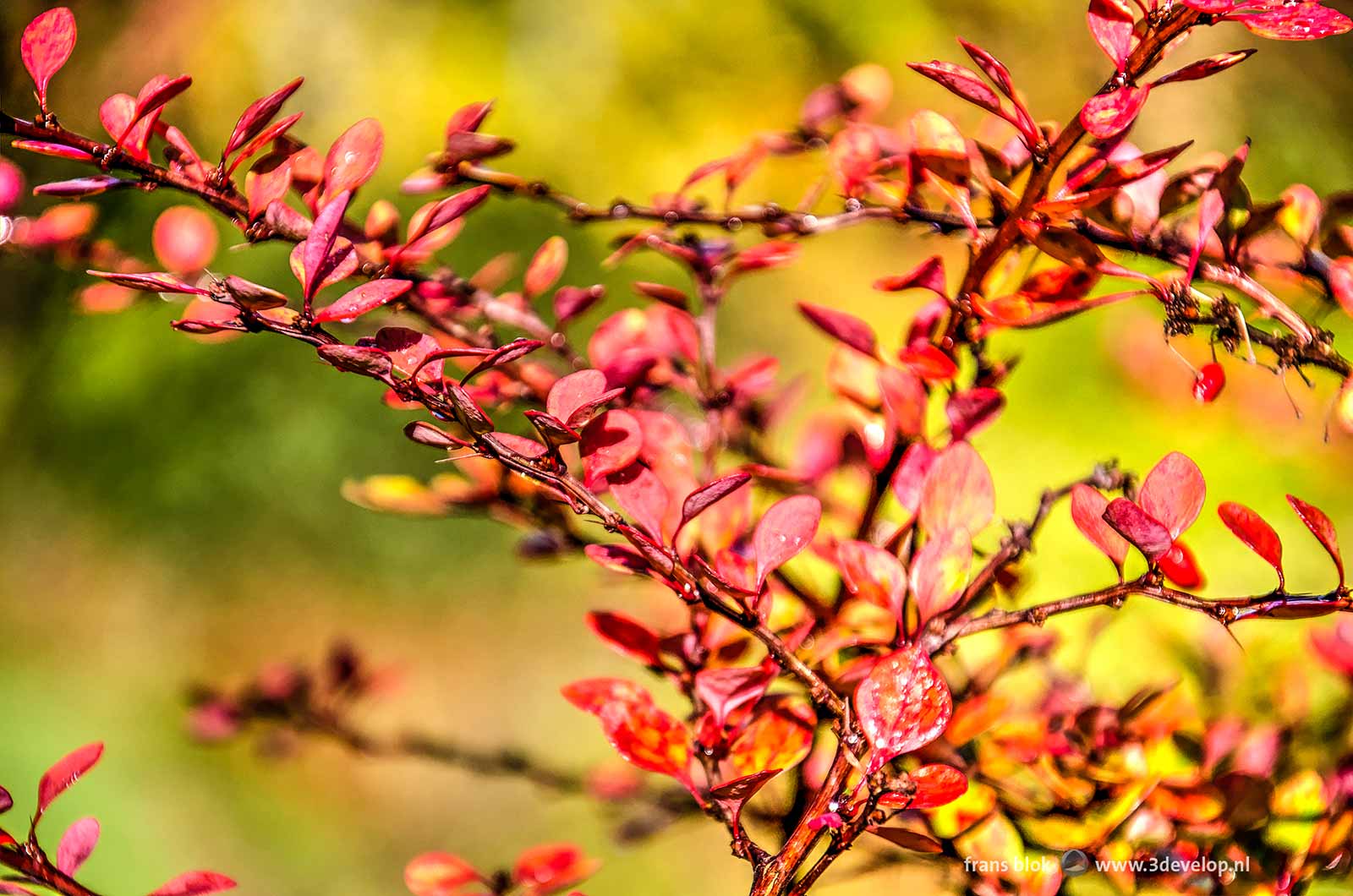 And don’t forget to look at the water. The combination of sunny weather and little wind leads to reflections that you wouldn’t expect to be possible. I made this almost abstract picture of overhanging branches in a golden pond during a photo-expedition in The Hague Forest. 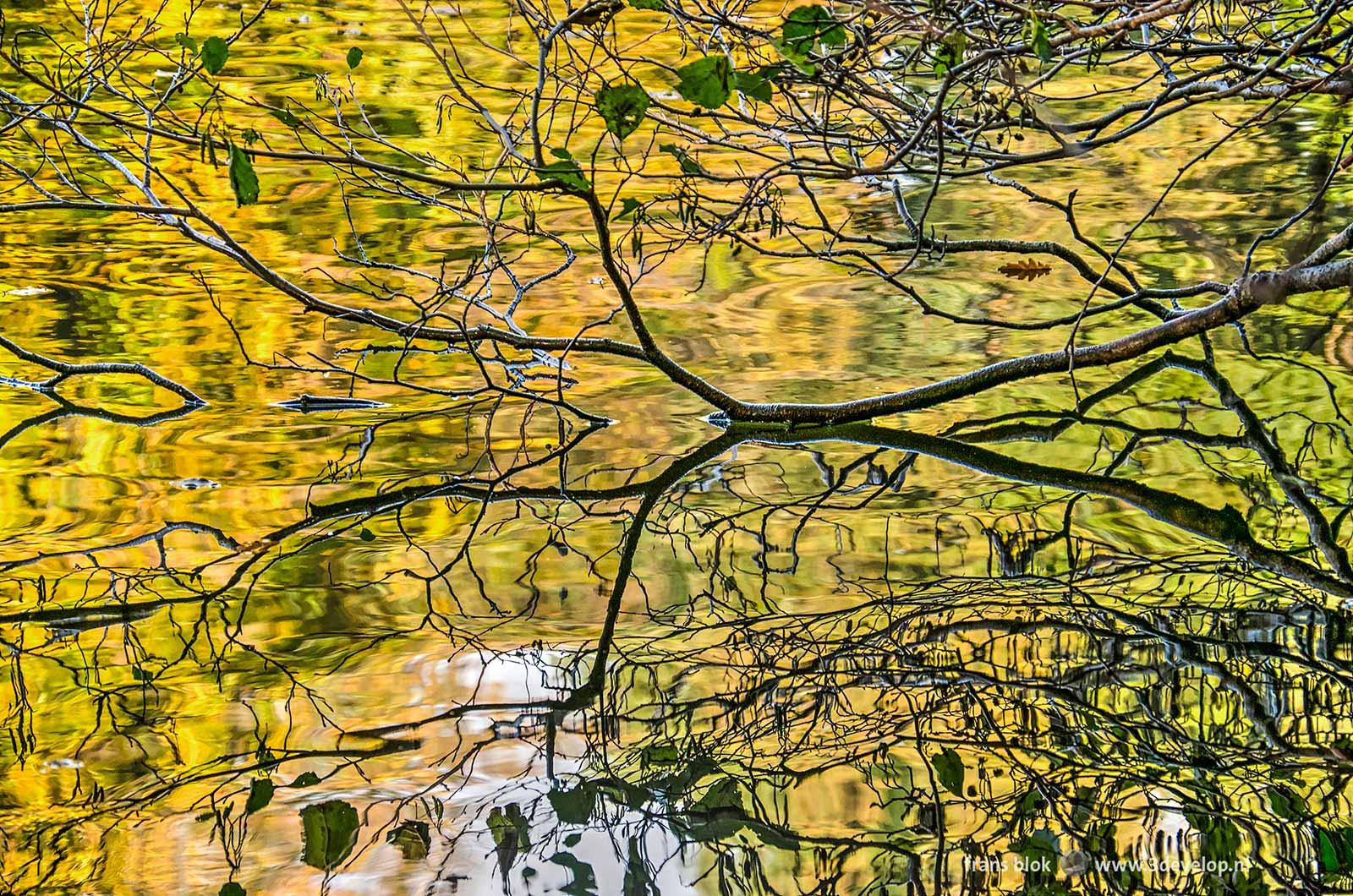 The disadvantage of autumn is that it rains a lot. Or does it? According to this graph, summer in the Netherlands is wetter than autumn. And to me it feels that could very well be true.

But anyway: even when it rains, there are a lot of photo opportunities in the fall. Especially when it rains, I would say. By making the leaves shiny, the rainwater literally adds an extra layer to the beauty. 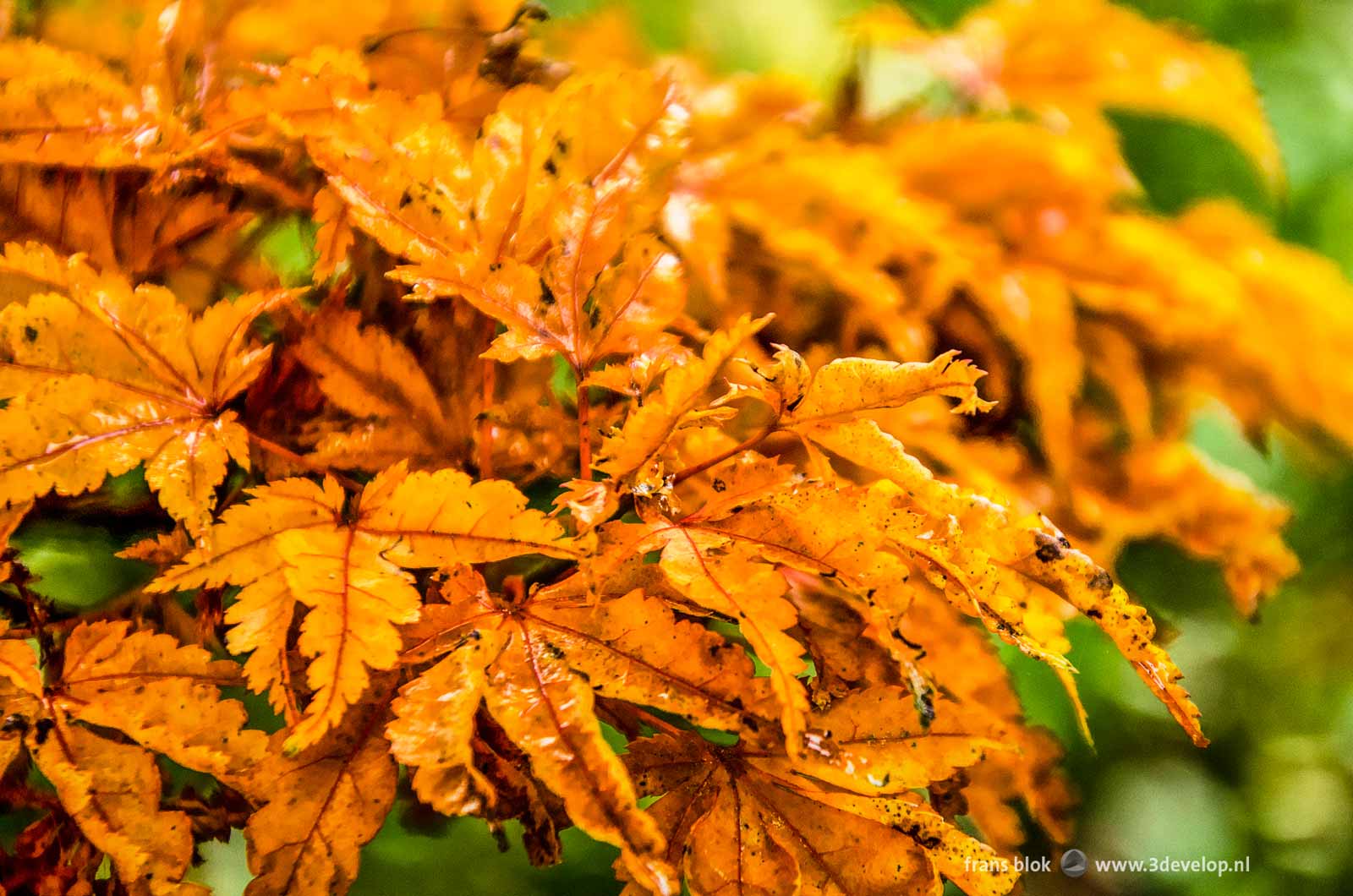 Having said that, even the greatest weather grumbler must admit that we have experienced a fair number of days with quiet and sunny autumn weather this fall. With as a result this kind of almost festive pictures. Beech leaves in backlight, what else do you need? 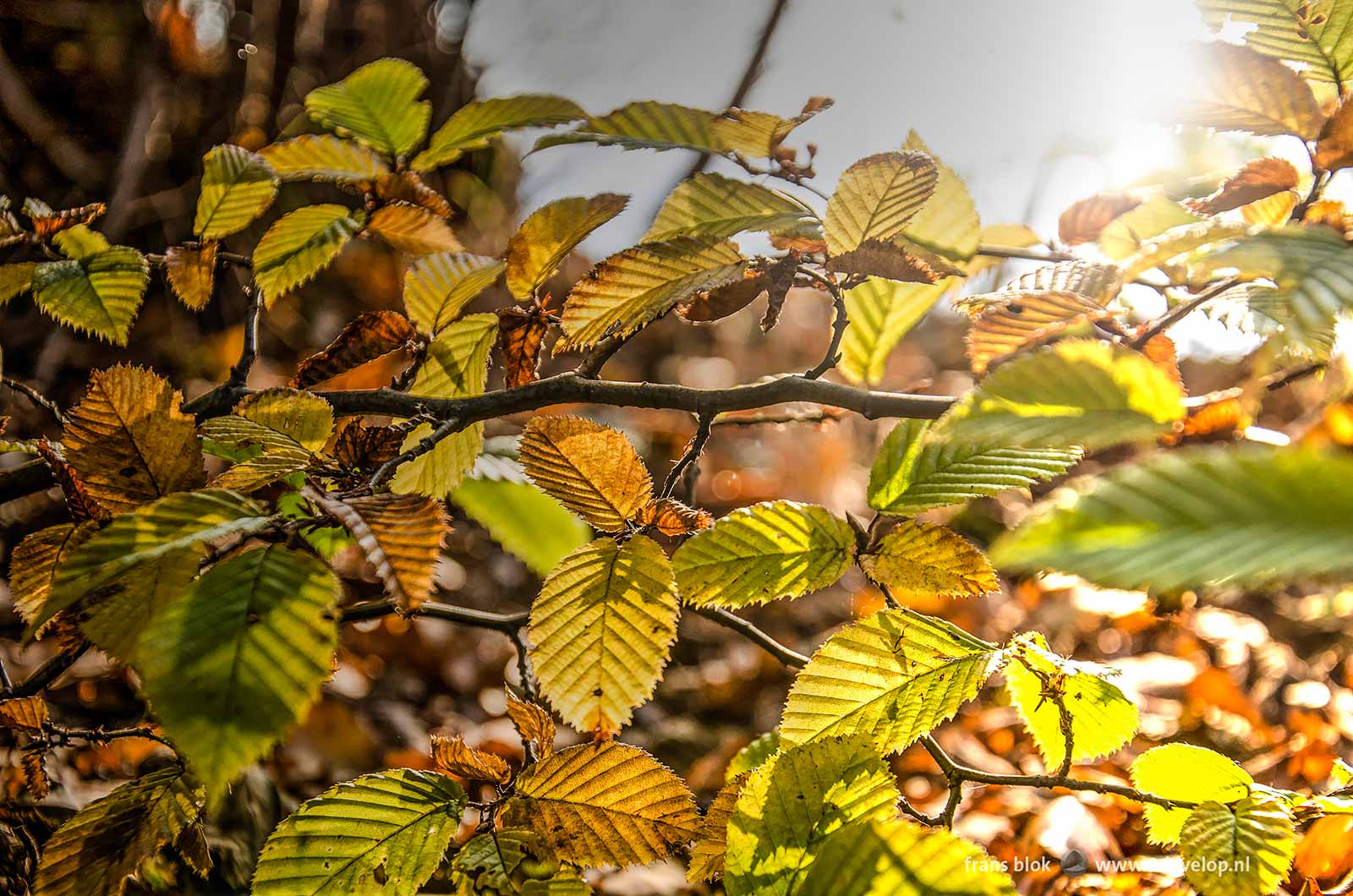 Fallen leaves are a beautiful photo subject in which the beauty and tragedy of autumn come together nicely. Because apart from euphoria about the colors, autumn also gives rise to melancholy. A fallen leaf symbolizes mortality.

On the other hand, in just a few months, that tree will have new leaves. For trees there is a life after death; for us humans this is not yet proven. 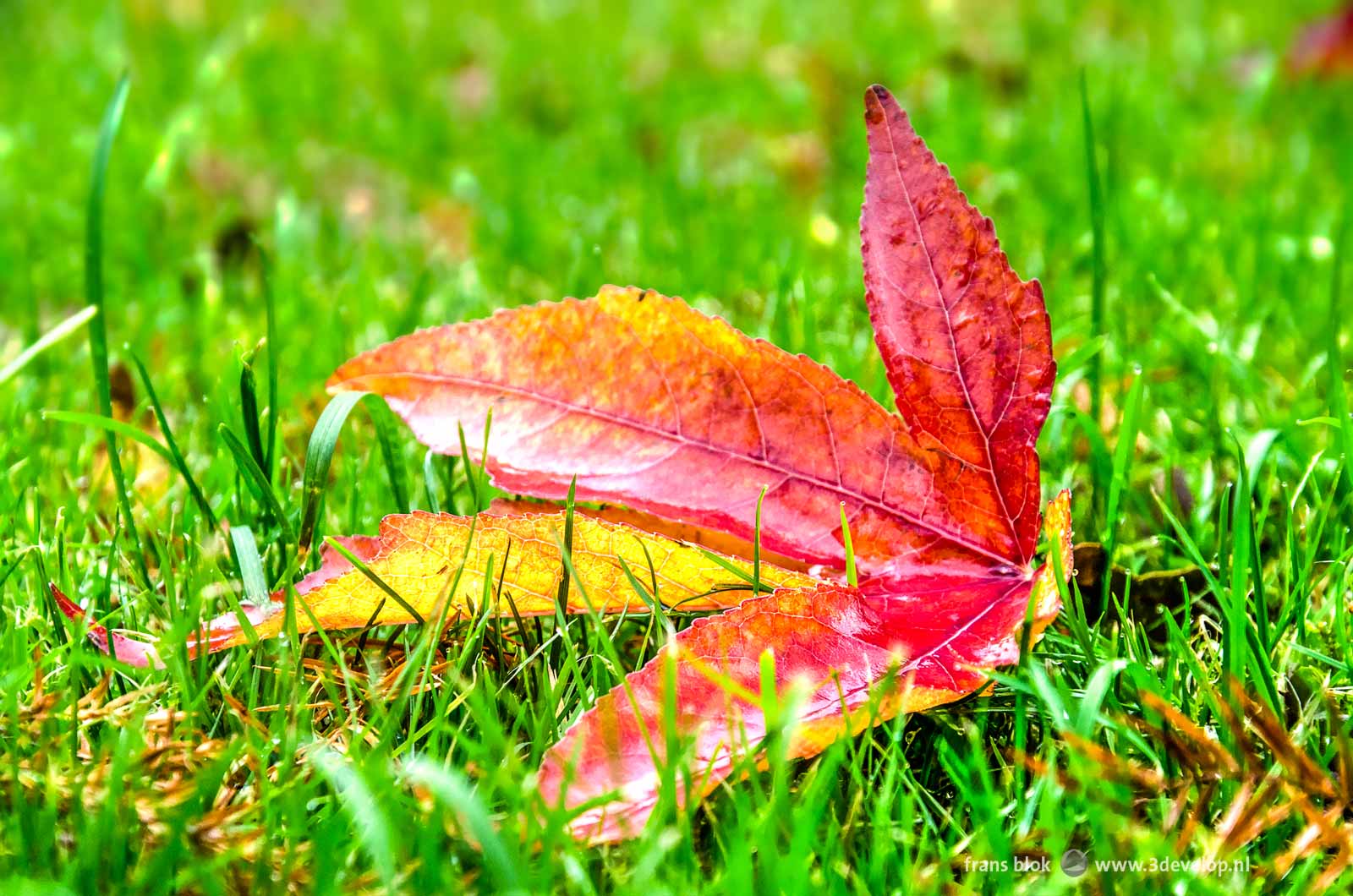 A special variation on the theme of fallen leaves is the autumn collage: a photo of a large number of leaves, preferably of as many different trees as possible, lying on the ground or floating in the water. 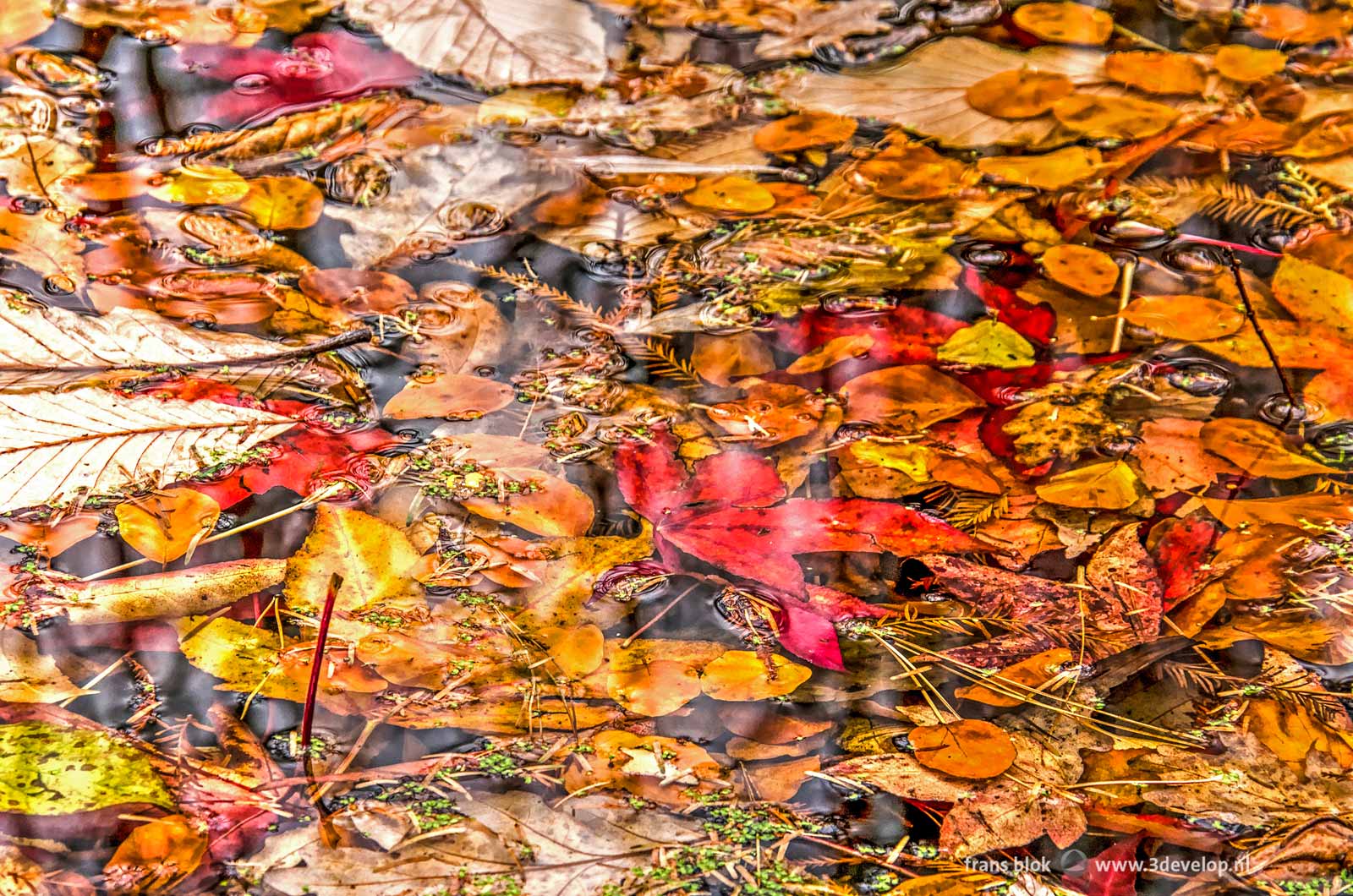 Due to all the splendor of the trees you would almost forget the flowers. But even those are still worth photographing in the fall as the hydrangeas below, spotted in The Park in Rotterdam, demonstrate. Well, the decline has unmistakably started, but that too is photogenic. It is the same with people: a characteristic portrait of an eighty-year-old is often just as intriguing as a glamour picture of a young photo model. 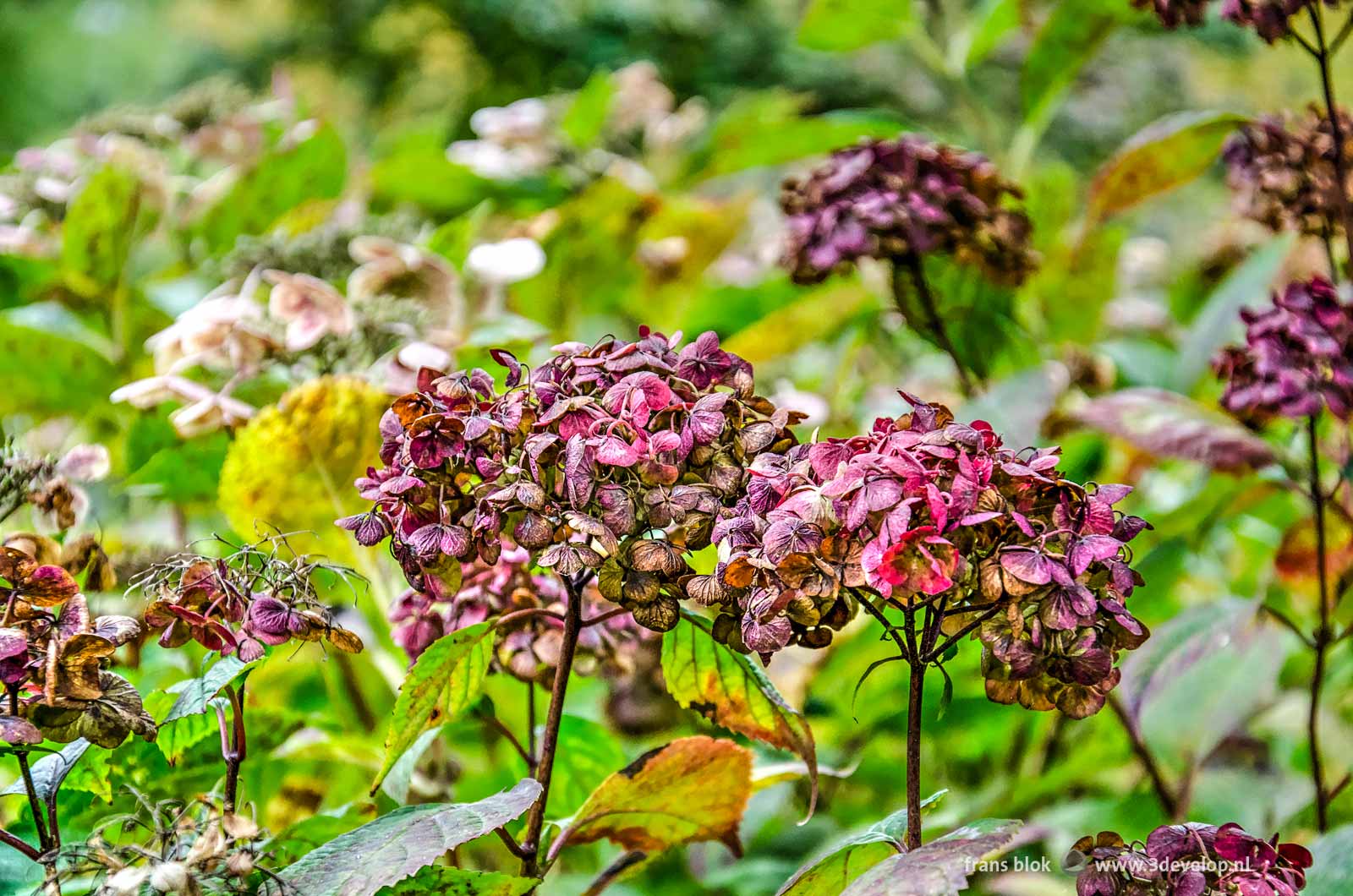 Experience shows that the beauty of autumn is at its peak around the transition from October to November. It depends on the wind how long the splendor will last after that. This year, there weren’t any severe autumn storms. In spite of this, by the end of November, there’s not much left of the allure, apart from an occasional plane tree. Like I said, the photographic autumn coincides more or less with the meteorological. 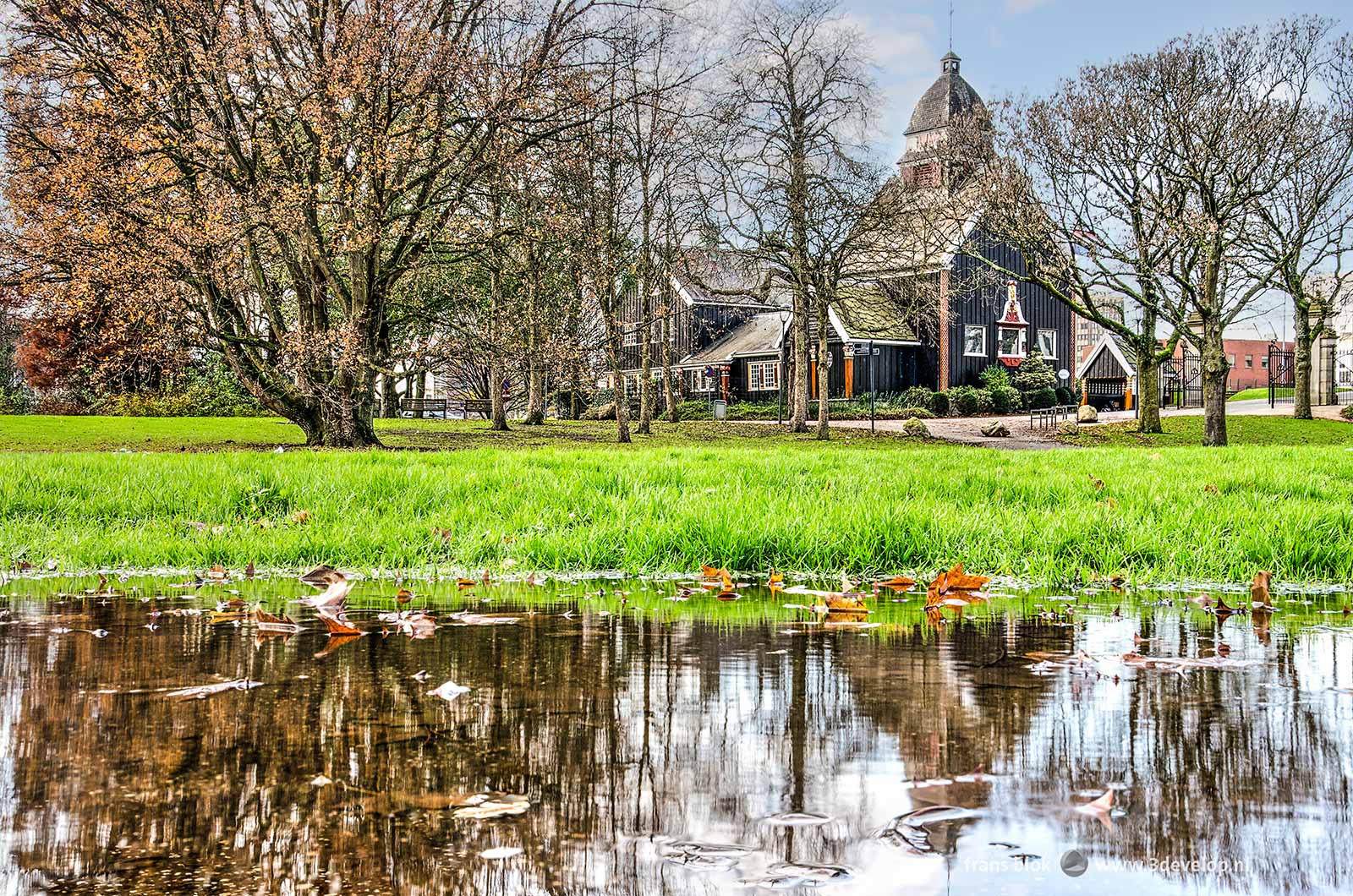 By the way, Wikipedia reports that in the northeast of the United States, also known as New England, there are actually more anthocyanins in the trees, making the forests much more colorful in autumn than in Western Europe. Maybe next year I’ll plan a photo-expedition in that direction; I’ll start thinking about how to fund such an enterprise.