Last week, together with a number of fellow photographers, I had the opportunity to take photographs from the 37th floor of the Delftse Poort building (formerly known as Nationale Nederlanden). Many thanks to Ramazan Aydogan of Rotta Historica for organizing this event and to the facility management of Delftse Poort for their hospitality.

Delftse Poort is one of the highest buildings in Rotterdam, and right in the center. You do not get a chance to take photos from such a place very often, and certainly not during the part of the day that is so popular among photographers: the hour around sunset. 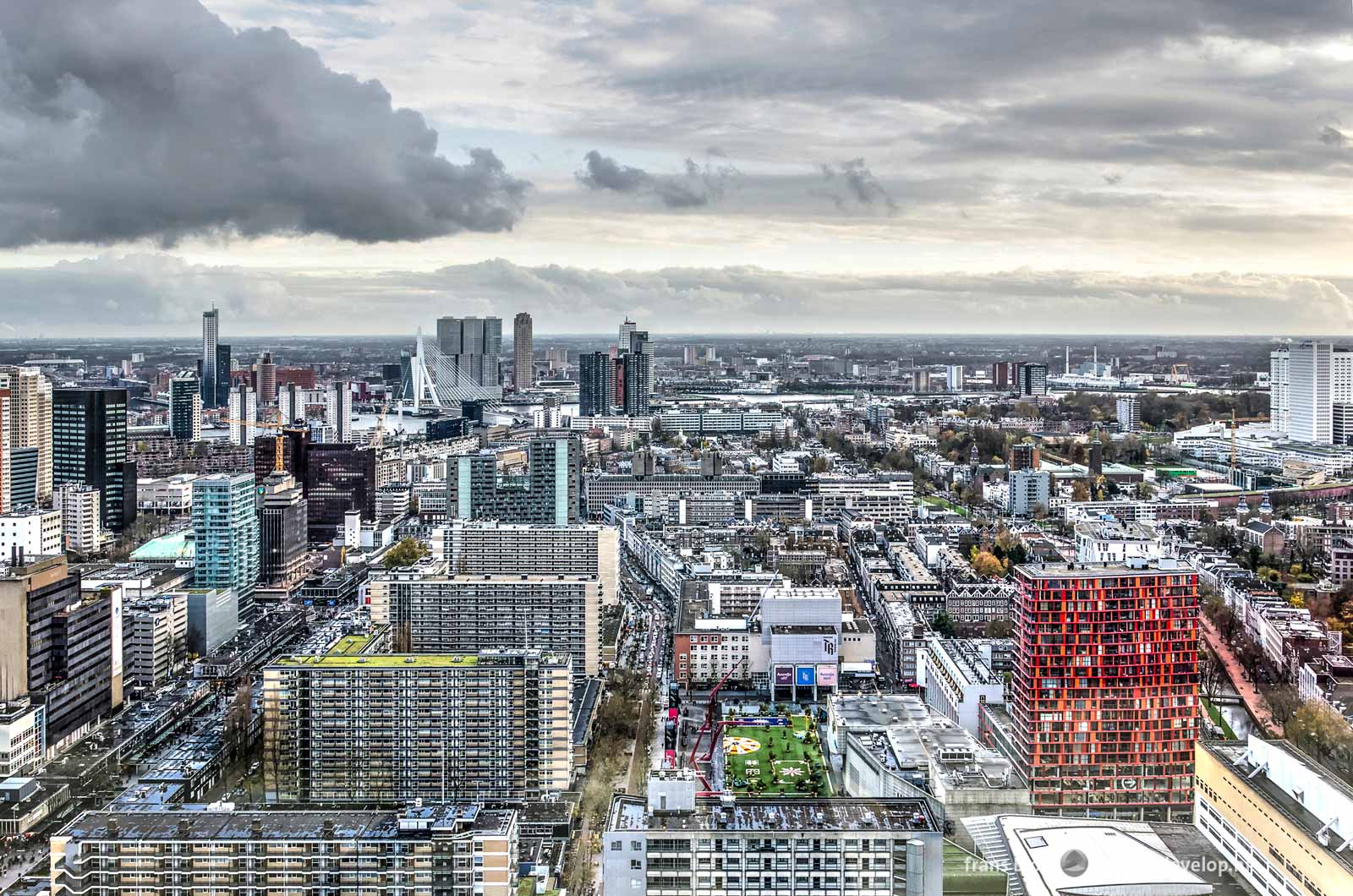 Unfortunately, the building has no outdoor spaces so we had to take photographs through glass. An additional disadvantage: we couldn’t turn the lighting off. I understood that it works on motion sensors, so if all of us wouldn’t have moved for a few minutes, we might have been able to make the room dark. But that’s theory.

The glass itself was not the main problem because the window cleaner had done his job well. The reflections of the interior light on the glass caused bigger problems and they got worse as it got darker outside. Oh wait, did I say problems? I mean, of course, challenges.

There are a number of ways to combat the reflections. To begin with, it helps to place the camera as close to the glass as possible. Also by photographing only perpendicular to the glass a lot of reflections can be prevented, but that’s rather limiting.

Additionally, you can try to keep the light away from the camera as much as you can. One of my colleagues had taken a special protective construction for this. I wasn’t that well-prepared so I used my coat as a shield; that did help somewhat but certainly did not work perfectly.

Another way to bypass the reflections is by zooming in on details. On this photo of the Rotterdam Schouwburg (or Theater Rotterdam location Schouwburg as I should say these days) I don’t see any unwanted light effect at all. 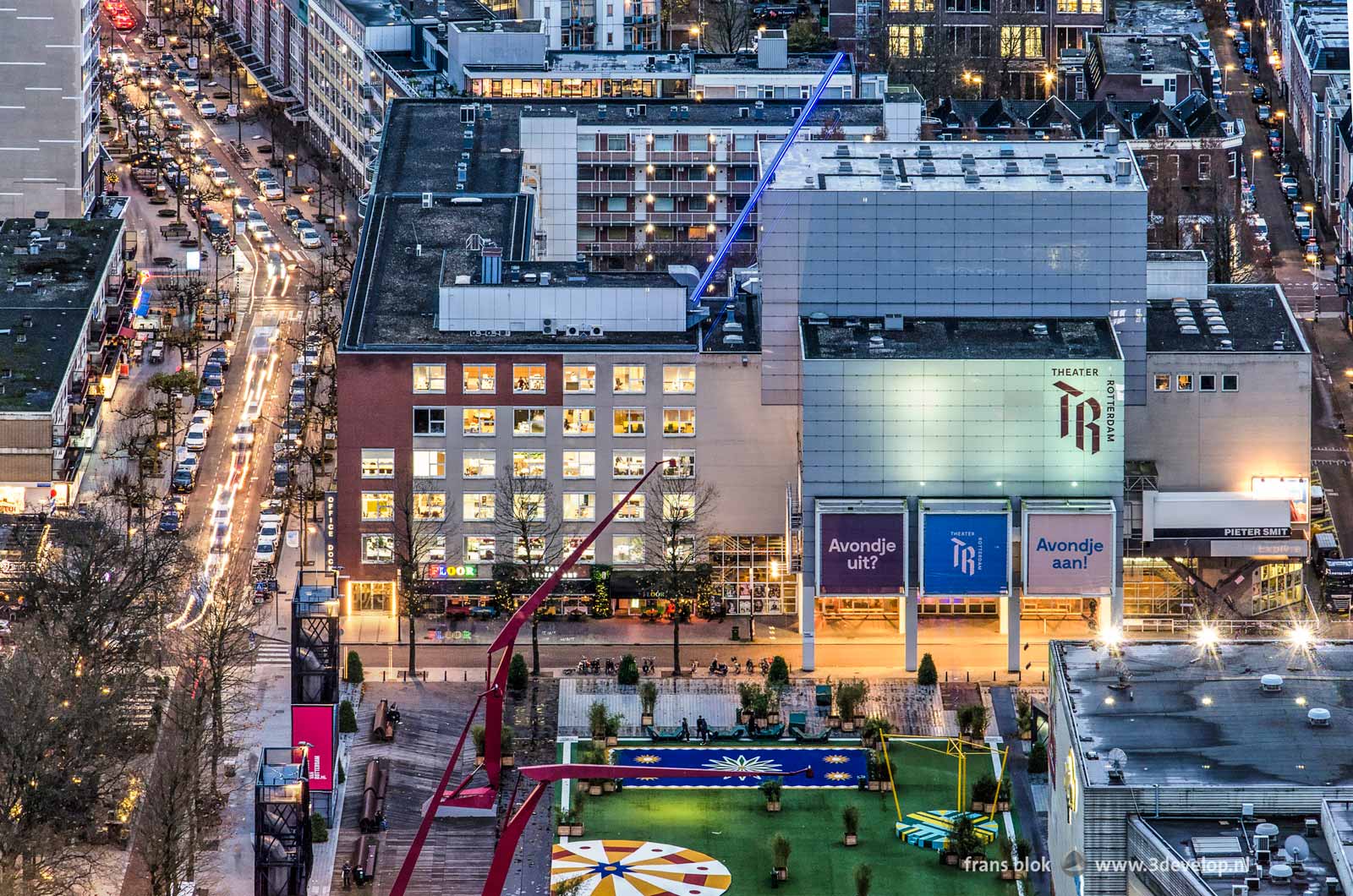 As a last resort there is always Photoshop. That is not a panacea in this kind of work, but in a number of cases I managed to get rid of disturbing glares and glows, or at least make them less noticeable. Take for example this photo of the City Hall: perfect in terms of sharpness and cropping and with Hilton, Timmerhuis, Saint Lawrence Church and Markthal in a supporting role, but with an annoyingly bright area in the right half of the photo. 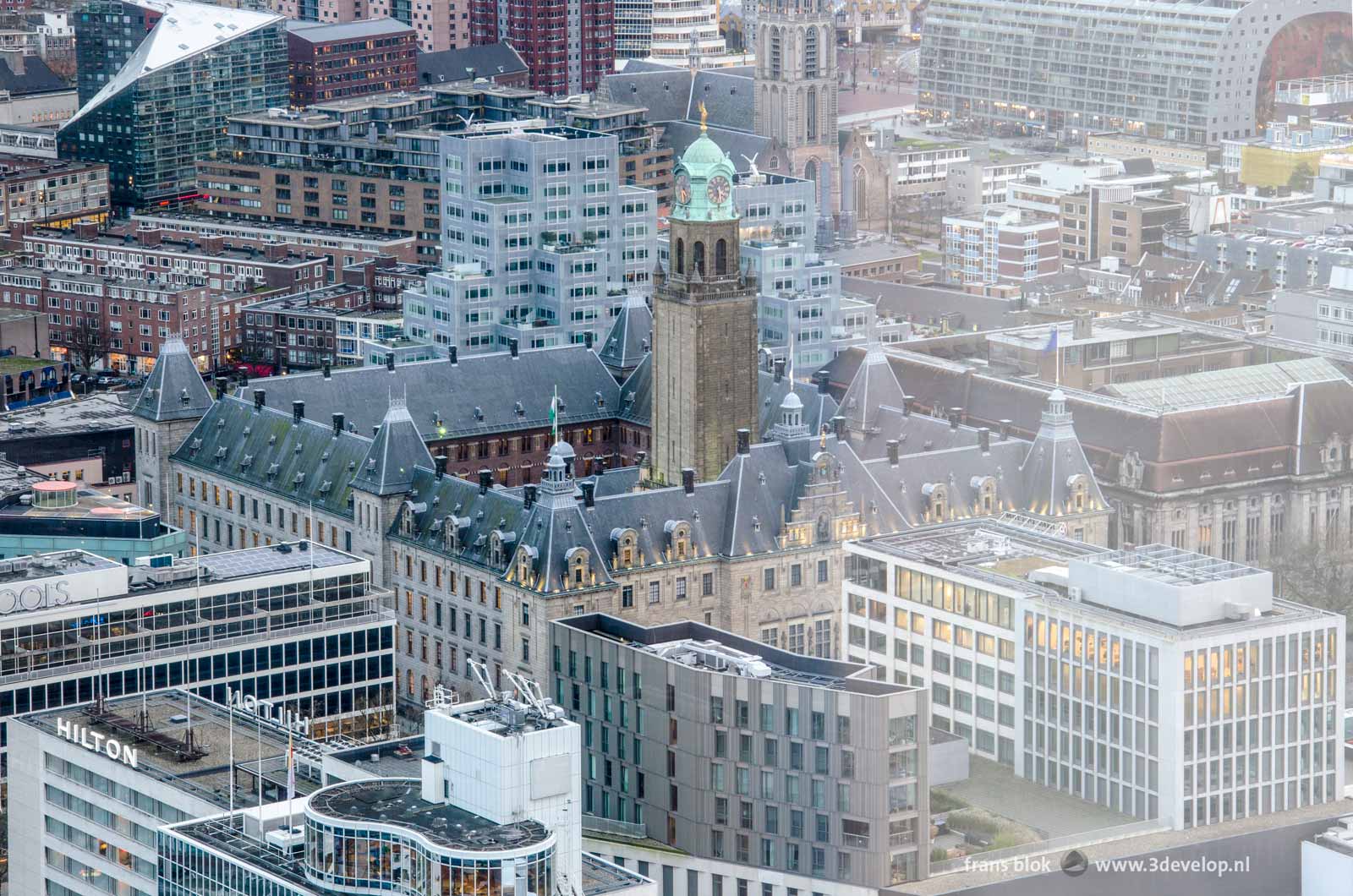 I copied the whole picture to a new layer. I gave that layer a mask that coincides as well as possible with the bright area. Then I started playing with the Brightness and Contrast sliders. 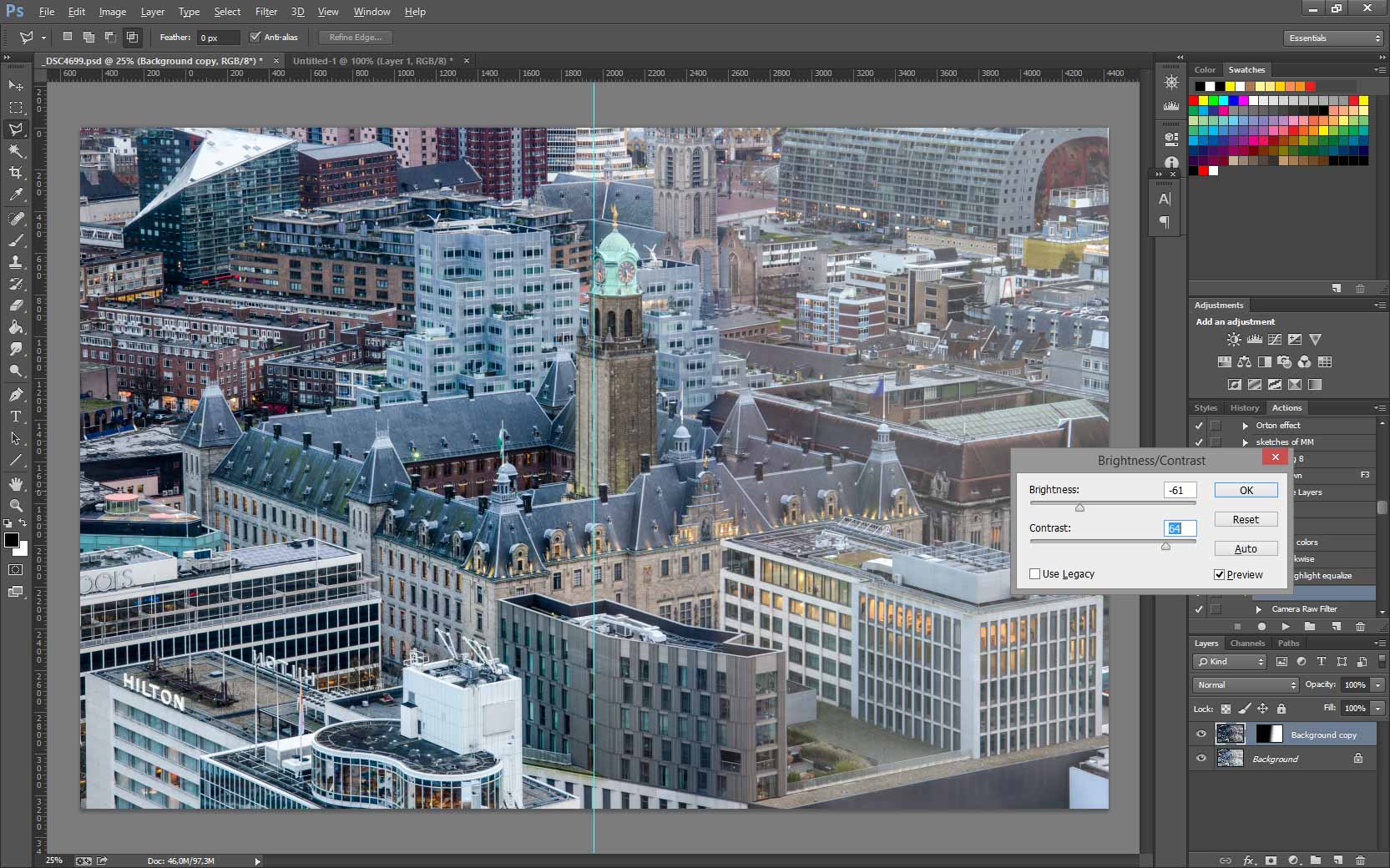 After some trying I came to values that considerably reduced the presence of the light spot. If you know where to look, you might still see it, but someone who sees the picture for the first time probably won’t be aware of it. 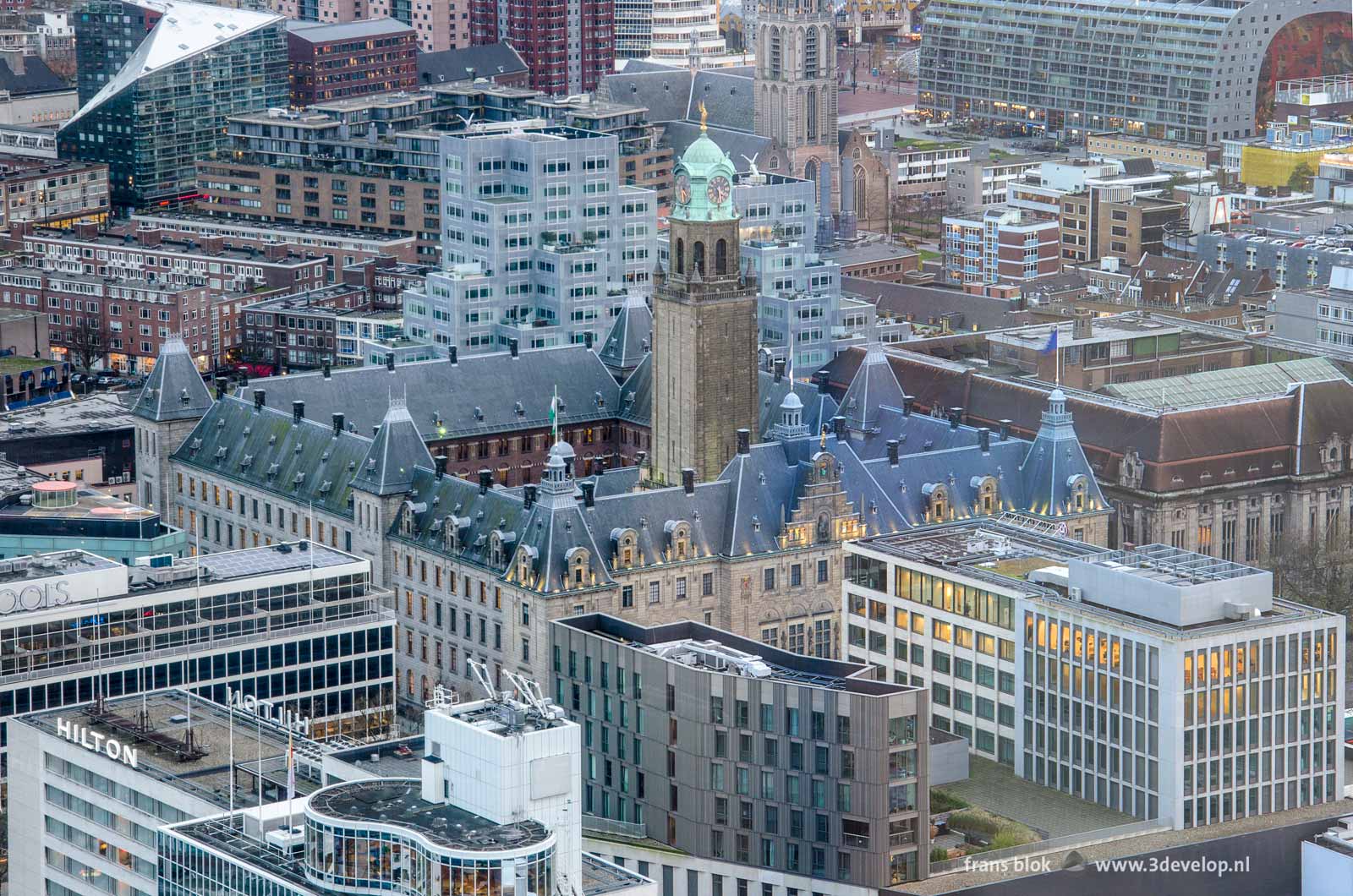 Anyway, the best way to prevent reflections remains: not photographing behind glass at all. In other words: to the roof! I hope to get the chance to take photos from there as well; I’ll keep you posted.

PS: to my colleagues who were there too: if you have photos of this shoot online, please leave a link in the comments below.