When you want to capture the whole Solar System in one image, you come across a problem: the distances between the eight planets and their star are huge, almost unimaginable. In all the pictures of the solar system you’ve ever seen the sizes of the planets are wrong: they are strongly exaggerated, by necessity.

On a scale model of about two metres – a nice size to hang on the wall in your living room – the Earth would be only four thousandths of a millimeter. You wouldn’t even be able to see our homeworld!

The only way to provide insight into those dimensions is through the construction of a much larger scale model. Like some Americans did recently in the Nevada desert.

A few years ago, I conceived the Street Planetarium (subtitle: Heaven on Earth), a model of the solar system on the scale of the municipality of Rotterdam. With the Sun near the library on Binnenrotte and Neptune at the pier of Hoek van Holland, the Earth would be a sphere of eight centimeters on Weena: 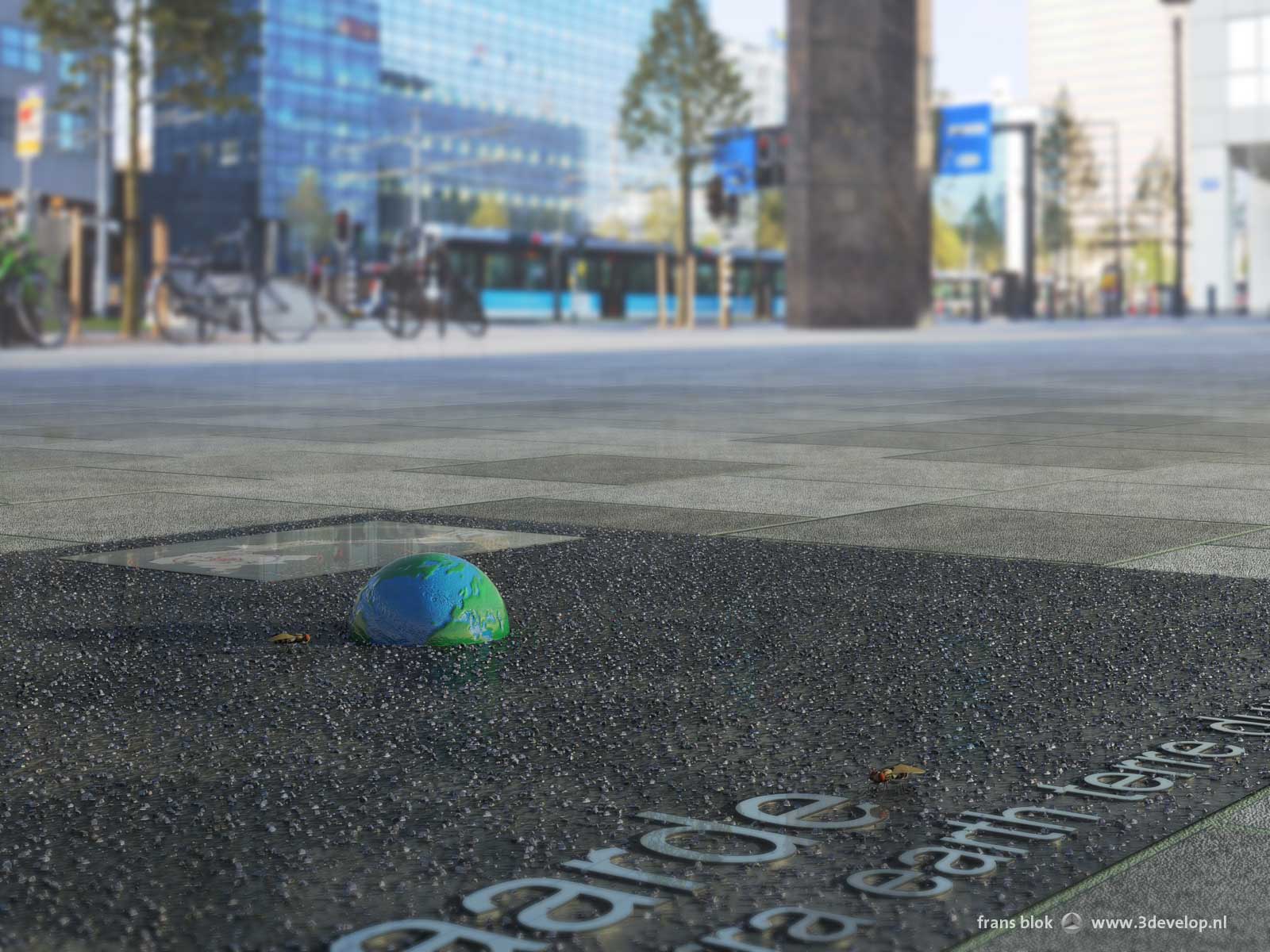 And what if you forget about those huge empty spaces and just try to show the sizes of the planets in the right proportions? Then you have to deal with another problem: they vary greatly in size. The four outer planets, the gas giants Jupiter, Saturn, Uranus and Neptune, are on average a factor of ten bigger than the inner, rocky planets Earth, Venus, Mars and Mercury.

If you want to show all eight in their entirety, the Earth is still only a small ball, not to mention Mars and Mercury. And precisely these minor planets have some interesting details you’d like to see. The canyons of Mars or the continents of the Earth, for example.

So for the family portrait below, I have zoomed in on the inner planets. In the background we see the gas giants, whose size can still be felt by the curvature of their horizons: Jupiter (top right), Saturn (lower left), Uranus (top left) and Neptune (lower right). In the foreground the inner planets: Venus (top left), Mars (lower left), Mercury (top right) and of course our own Earth (lower right). 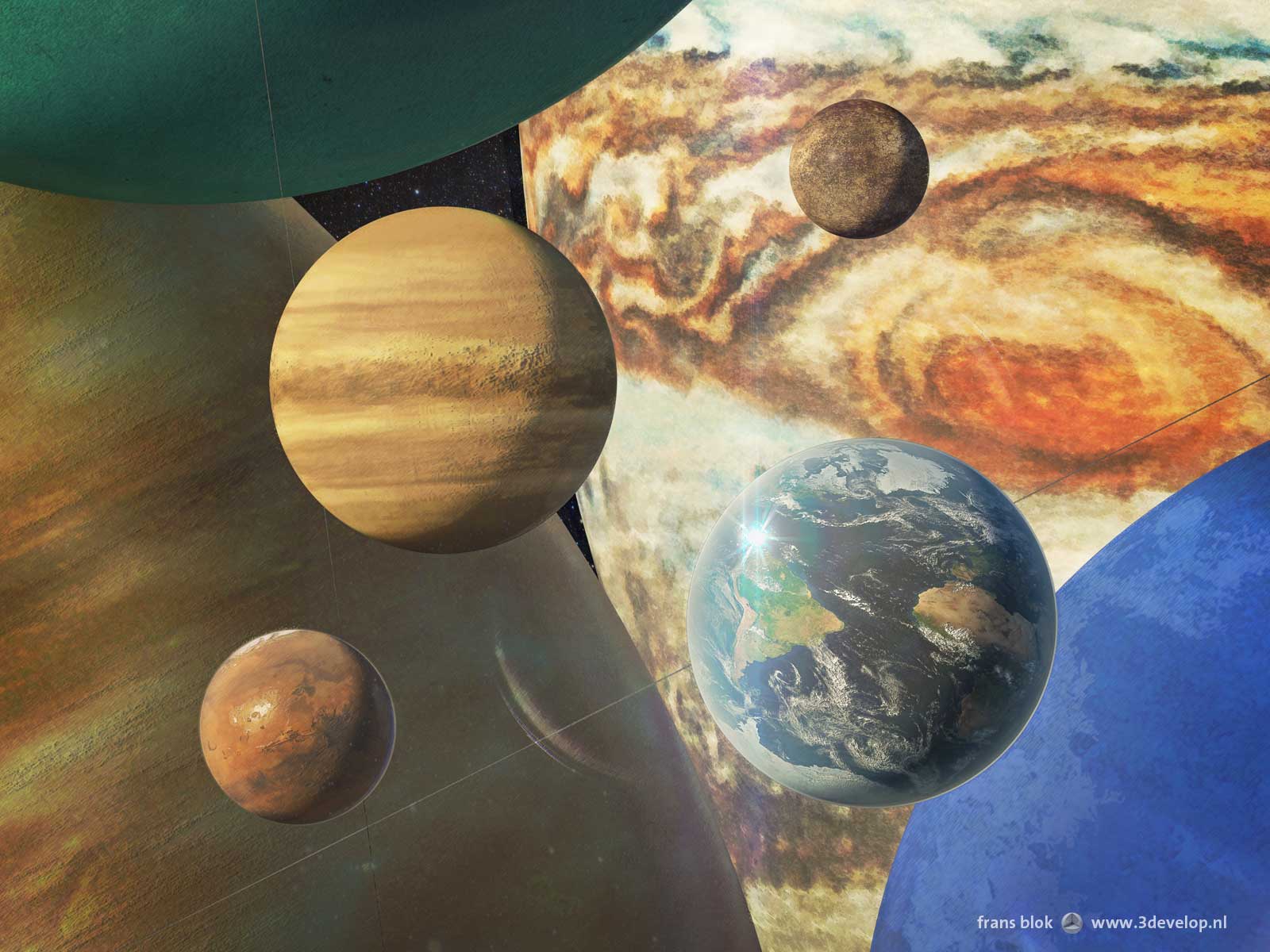 I’ve been pushing heavenly bodies around until I had an interesting composition. Also, I wanted to have some of the great sights of the Solar System in the image. The rings of Saturn and Uranus for example. And the Red Spot of Jupiter, which is large enough to swallow the Earth in one piece.

I turned Mars with its best side to the camera, showing the 5000 kilometer long canyon system Valles Marineris and the four giant volcanoes.

Our Earth is, of course, photogenic from all angles but I liked this side the best, with the Sahara, South America, and the ice sheets of Antarctica and Greenland: three different landscapes on one planet. On the top left we can see, with some effort, North America; more to the right we see Western Europe where the sun is just setting. Rotterdam, city where the image was made, is smaller than a pixel, even in the hi-res version.

King of the Dwarfs

Attentive readers may have missed Pluto, about half the size of Mercury, in this family portrait. Indeed, since 2006 that little world is no longer considered a planet but a dwarf planet. The reason: there are, especially in the outer reaches of the solar system, many more celestial bodies that have approximately the size of Pluto. And you have to draw the line somewhere. But Pluto is the King of the Dwarfs, especially since the beautiful pictures from the NASA probe New Horizons reached Earth.

The Sun, a factor of ten greater than Jupiter, is missing as well, because I needed it to illuminate the scene from the left, outside of the image. And I have also left out the many moons of the planets. Some of those, like our own Moon, are about the same size as Mercury, most are much smaller.

This Portrait of the Planets is, of course, available on canvas, aluminum and wood in the Space Art corner of my webshop.