Psyche Station: living in an asteroid

Some people use Facebook to watch cat videos or to read fake news. I use this medium for completely different things.

A few weeks ago, my attention was triggered by a sketch my Facebook friend Shaun Moss posted. A simple drawing of a fairly extensive project: the excavation of asteroid 16 Psyche for the establishment of a space colony. 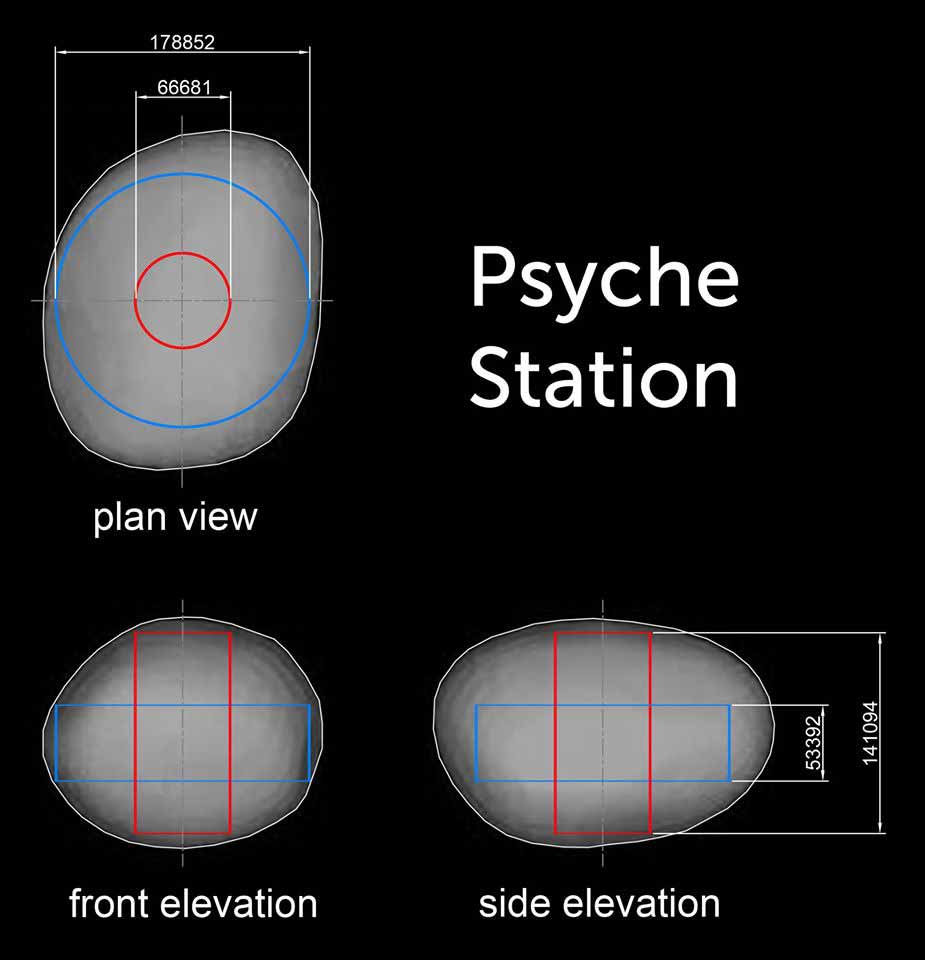 The blue lines indicate a huge cylindrical space (the distances are in meters). Rotating the big rock around its central axis creates a centrifugal force on the curved walls of the cylinder. That force feels like gravity, like in a spinning washing machine. The red lines indicate an optional second cylinder with Mars gravity: two-fifths of what we are used to on Earth.

To illuminate such huge interior spaces you need a huge lamp, to put it mildly. The smartest way is probably to bring in sunlight through a system of mirrors.

16 Psyche is one of the largest small objects of the Solar System and as a result it was one of the first to be discovered. The serial number 16 says it all, doesn’t it?. The asteroid was first observed as early as 1852 by the Italian astronomer Annibale de Gasparis. As was common practice in those days, the name Psyche was based on a character from Greek mythology: Cupid’s lover.

Recently, NASA decided to send a spacecraft, but unfortunately that will not arrive until 2030. Psyche is part of the main asteroid belt between the orbits of Mars and Jupiter. That’s not so far away, on a cosmic scale, but to save fuel the probe will use a couple of slingshots by Earth’s and Mars’ gravity. And that takes time.

What makes this celestial body an interesting destination is its composition: Psyche consists to a remarkably large extent of iron and nickel. Therefore it’s probably the core of a larger object that, for some reason, has fallen apart in the distant past.

The concept of cylindrical inner worlds which rotate to generate gravity is not new. Gerard O’Neill described them already in the seventies of the last century. Several authors wrote science fiction novels that take place in such colonies: Arthur C. Clarke’s Rendezvous with Rama and Greg Bear’s Eon for example. Also the movie Interstellar features one: Cooper Station.

In the Mars trilogy by Kim Stanley Robinson they provide an interesting side story. In a more recent novel, 2312, Robinson developed the idea a bit further. In that book, “Terraria” are touring the solar system as a comfortable form of transportation. In addition they play an important role in the preservation of endangered species.

a few years ago I made an artist’s impression of such a miniworld ; you may have seen it before: 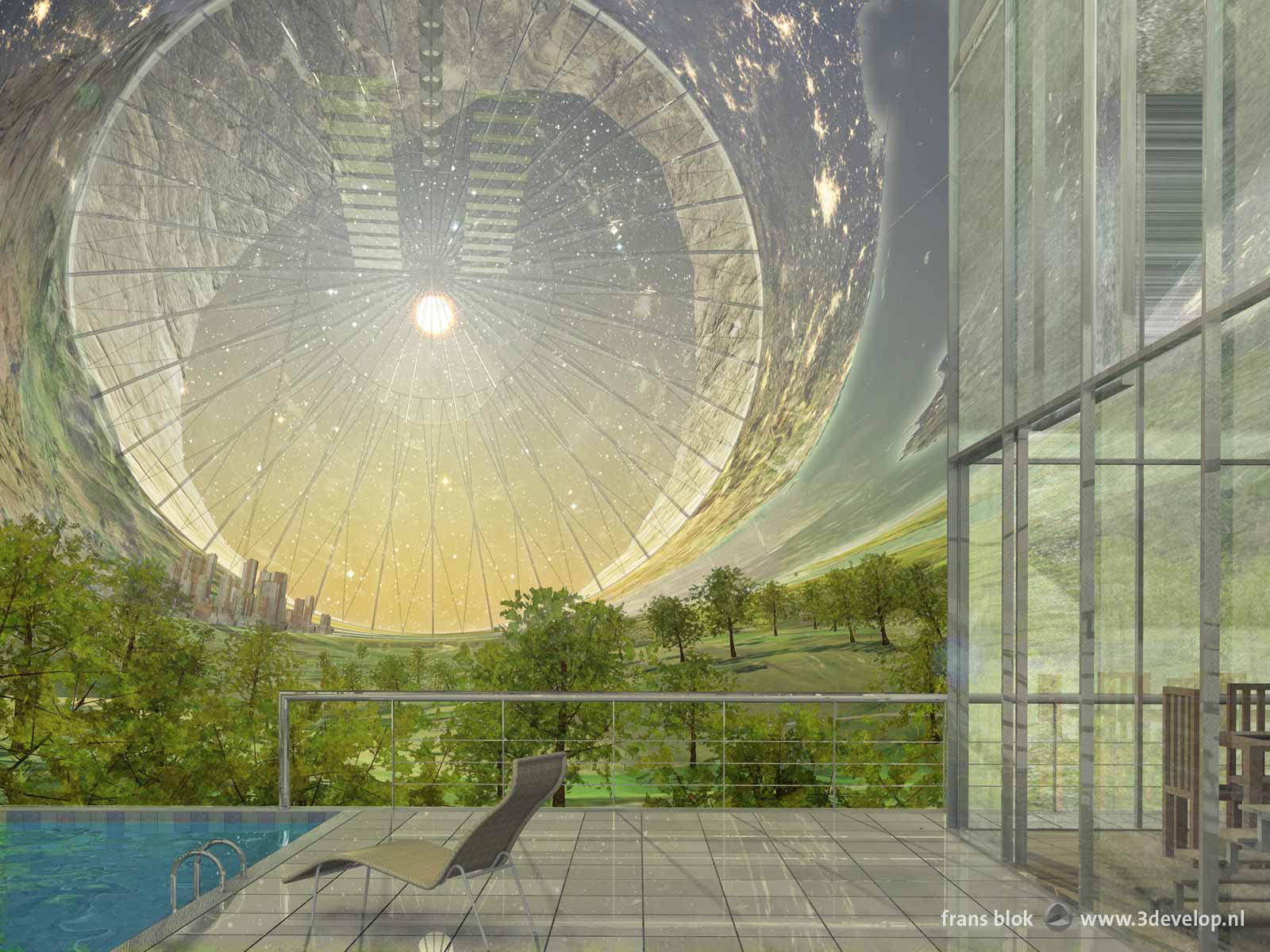 This image shows, however, a relatively modest colony with a diameter of “only” ten kilometers. Psyche Station is much bigger: the hollowed-out cylinder has a diameter of almost 180 kilometers and is more than 53 kilometers wide. This provides a livable area of 28,000 square kilometers, that’s roughly the size of Belgium. Although part of that will probably be water, for practical and aesthetic reasons.

To be honest, I sort of misunderstood Shaun’s sketch. His idea was not to carve out the entire cylinder but only the first few kilometers above the livable surface, to create a kind of circumferential tube. Being educated as an architect, I dare to say that a completely hollowed-out volume provides a much better spatial experience. Okay, it’s a little more work, but after all it’s mainly iron so that may be useful elsewhere in the Solar System. 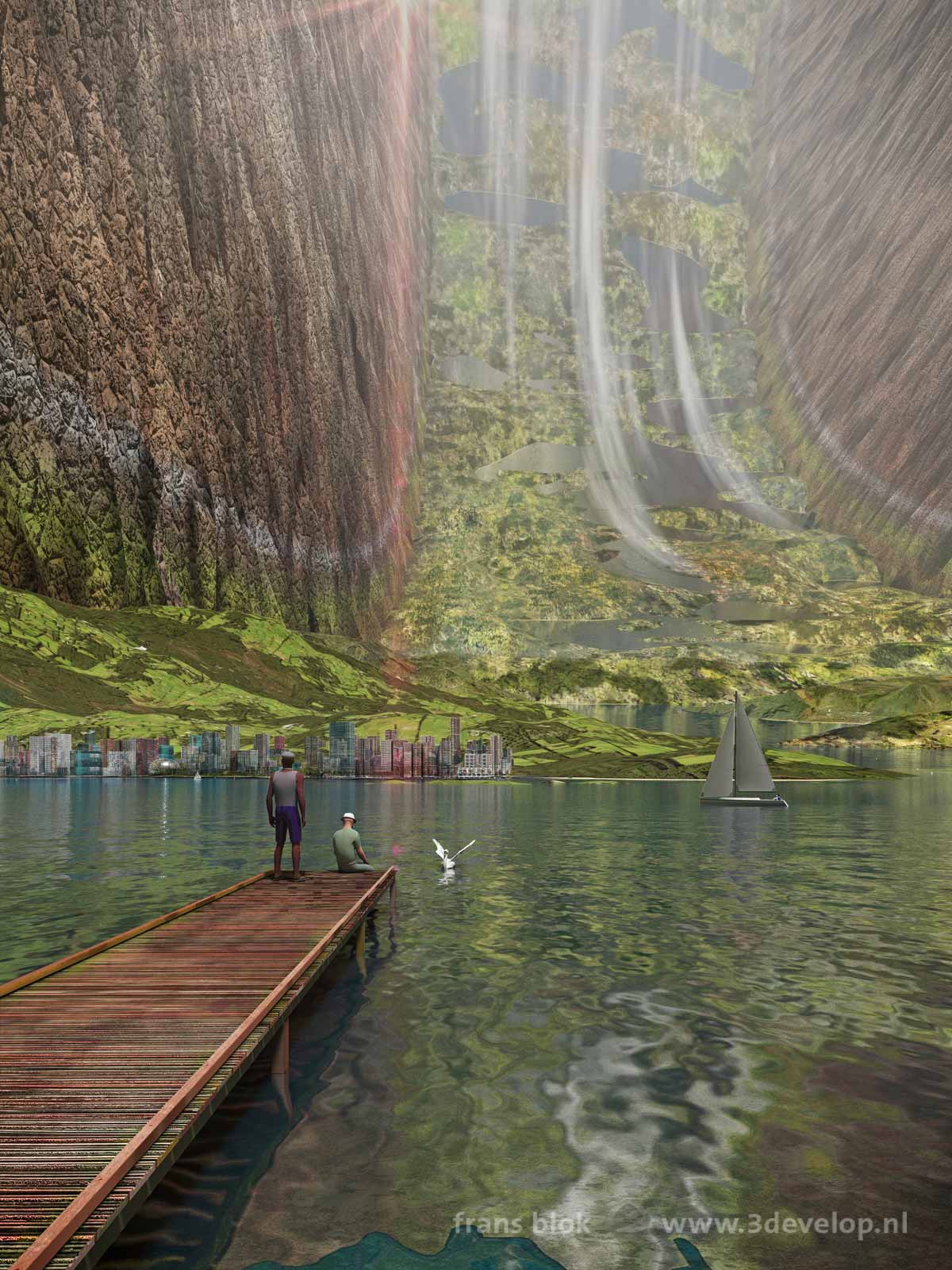 The best way to make such a large space tangible is by creating a layered image and introducing some small elements in the foreground. A swan spreading its wings, a sailboat sailing past, two men on a wooden jetty. Sitting on the dock of the bay. Everyone can come up with their own story.

On the other side of the lake we see the waterfront and skyline of a big city. Behind it a landscape of hills and lakes curves up along the inner wall of the cylinder. To the left and right rocky cliffs rise up ninety kilometers to the central axis.

Will space colonies like Psyche Station ever become reality? It seems rather likely to me as long as we don’t do stupid things with, say, the climate or with nuclear weapons. As long as, for example, the Americans don’t elect an unstable narcissist into the White Nouse. Anyway, the idea of an asteroid station does not violate the known laws of physics.

Okay, mining one and a half million cubic kilometers of iron sounds like a hell of a job but with a team of self-replicating robots it should be doable. It will be a challenge to make the habitat completely airtight and terrorism-proof. And the hardest part may be the creation of a stable ecosystem. You want to build something that can withstand the ravages of time. The colony should be able to exist for eons without further human intervention. You don’t want to imagine millions of people living in Psyche Station being trapped when civilization suddenly collapses.

I presume that there will have to be a kind of artificial intelligence to ensure such continuity. The residents of Psyche Station are unlikely to have religious disputes. Their omnipotent supreme being exists, although her jurisdiction remains limited to their own city-state.

After this blogpost was published, I was asked by the NVR, the Dutch Spaceflight Society, to elaborate the idea into an article for their magazine Ruimtevaart. The article, in Dutch, can be viewed by clicking here. 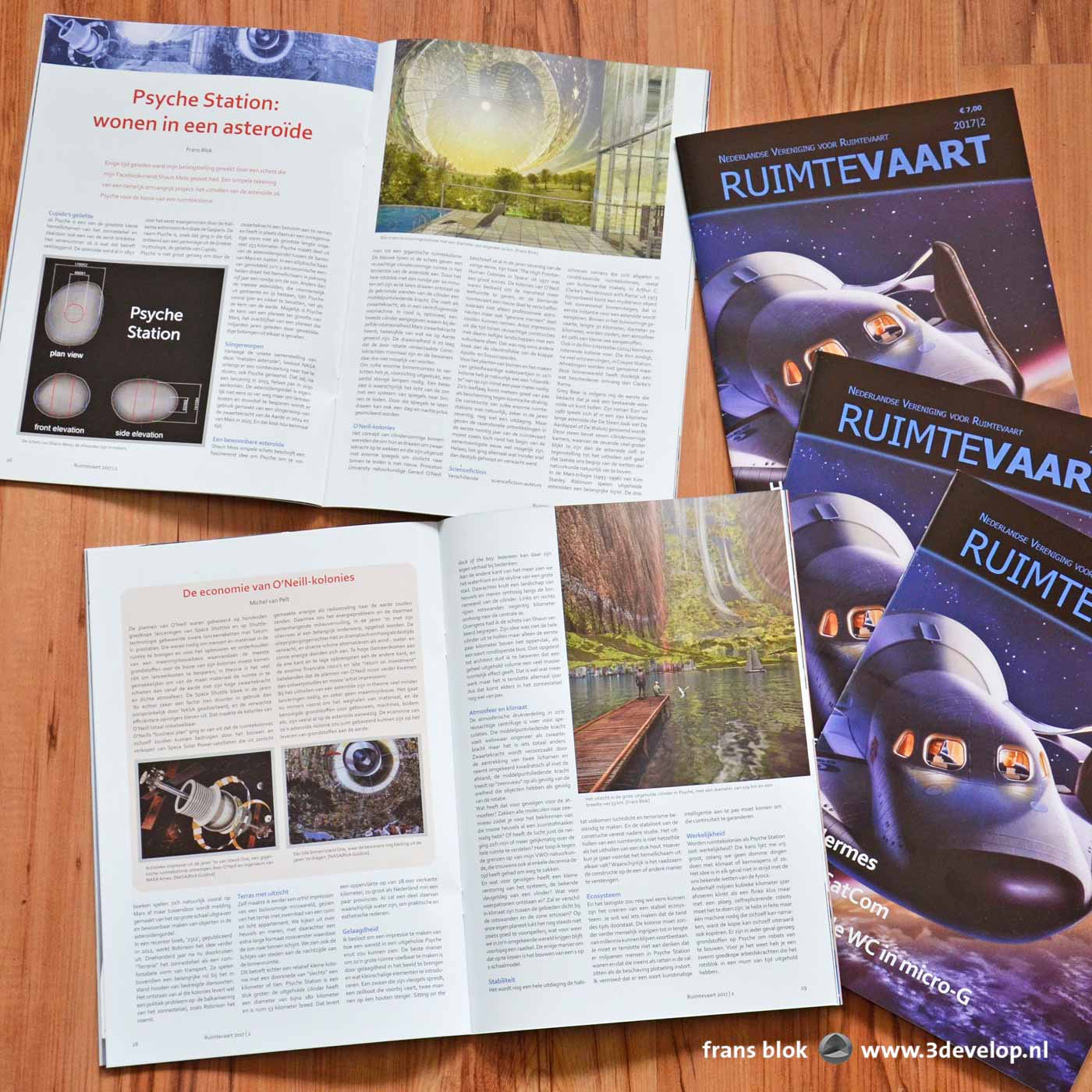