The Return of the Windmill, part 2

Half a year ago I made an artist impression of windmill De Noord, reconstructed at the Oostplein in Rotterdam. That action remained not completely unnoticed; it’s time for an update.

Together with Gyz la Riviere, whose film Rotterdam 2040 inspired me to create the visualization, I launched a campaign to raise awareness of the possibility of rebuilding the windmill. We had 2000 postcards printed, which we distributed in local bars, restaurants and other places: 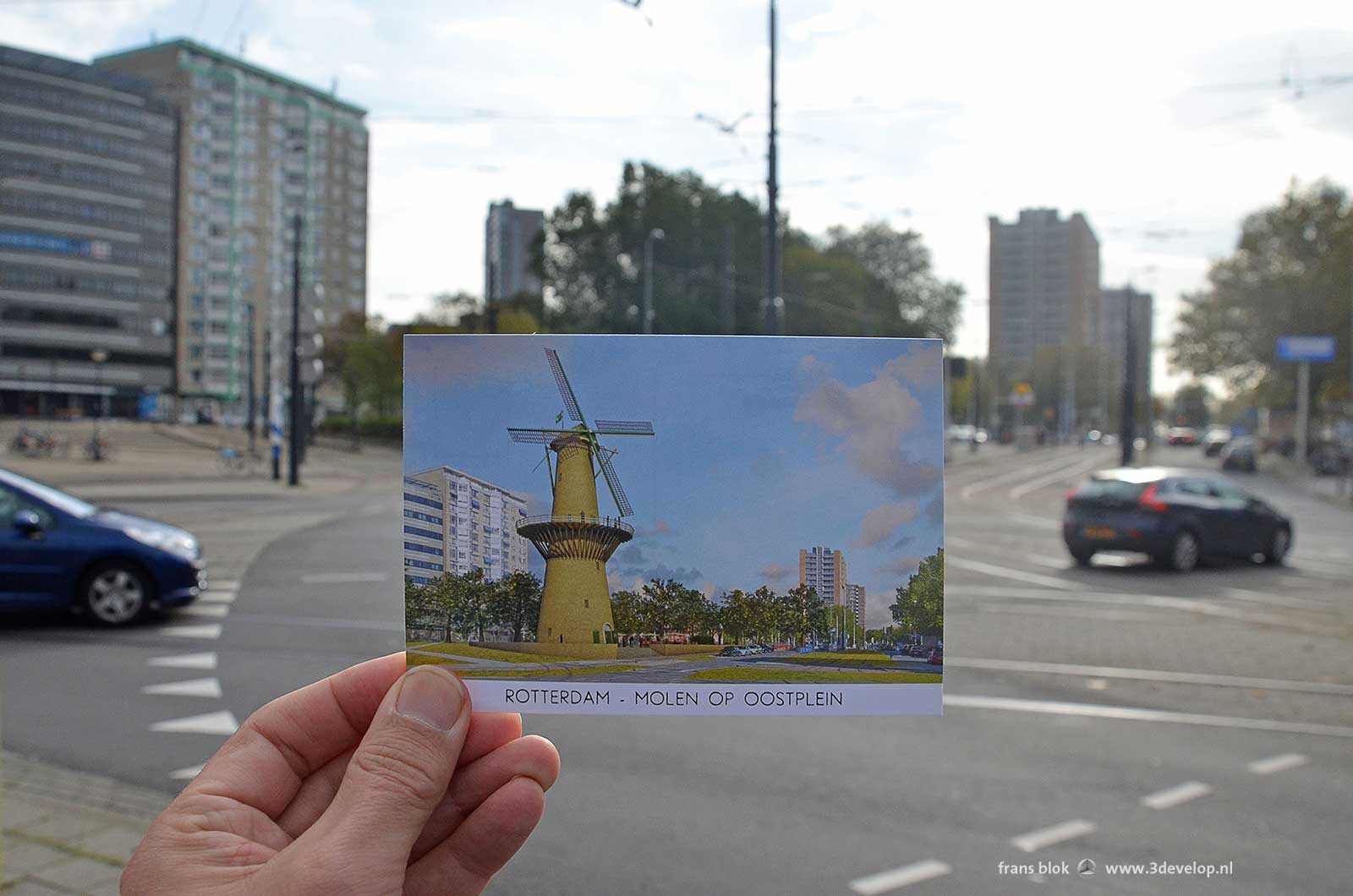 Also the mayor and aldermen, political parties and the media received a copy. The AD/Rotterdams Dagblad published an article which evoked enthusiastic responses from, among others, windmill lovers and shopkeepers on nearby Oostzeedijk.

One windmill expert pointed out to me that I had pictured the blades in reverse. Dutch windmills’ blades all appear to rotate in the same direction. Well, that’s an issue that will certainly be resolved in the case of an actual reconstruction.

Two questions were frequently asked:
– How much will the rebuilding cost?
– Where on the Oostplein should the mill be located?

Without detailed construction drawings it’s hard to answer the question about the cost. But rebuilding windmills has been done before; some googling shows that budgets are between half a million euros to … a little bit more. Windmill De Kameel in Schiedam was rebuilt between 2008 and 2011 for around 2.5 million euros. And that windmill, with its height of 33 meters (without blades) compares well with windmill De Noord.

Two and a half million, it’s far above my daily budget, but for a city like Rotterdam it is not too prohibitive. The three Rotterdam city initiatives (Luchtsingel, Ice Rink, Rif010) of recent years, for example, had budgets between three to five million.

But then the second question: what’s the correct location? The map below shows Oostplein as it looks today. A rather complicated square; as many as eight roads lead to it. Clockwise: Burgemeester van Walsumweg, Groenendaal, Hoogstraat, Goudsesingel, Boezemweg, Slaak, Oostzeedijk and Oostmolenwerf (East Mill’s Wharf, what’s in a name?).

As a result the square is a jumble of car lanes (brown), cycle paths (red) and tram lines (purple). Underground is a metro station (red dotted line) which should be taken into account. In the middle of the square is a tiny park, surrounded by a lot of stony surfaces. 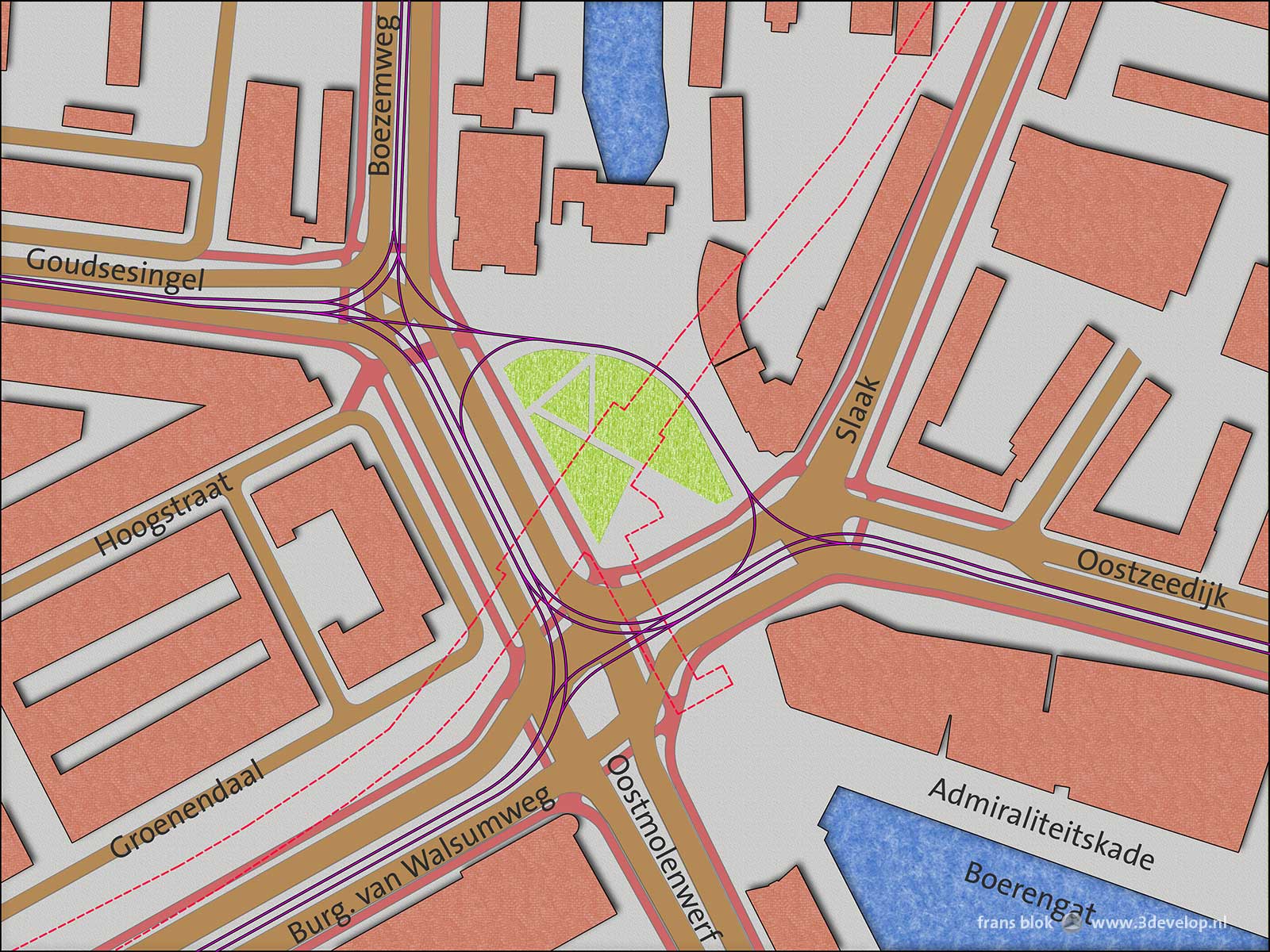 An interesting question is where exactly the windmill was located untill 1954. The following map shows the pre-war building blocks in relation to the current situation. After the bombing of 1940, quite a few changes were made to the street plan, as was already made clear by my double map of Rotterdam. Oostplein moved a little distance to the west. The windmill, which on old photos is close to the surrounding buildings, now would end up middle of the square: 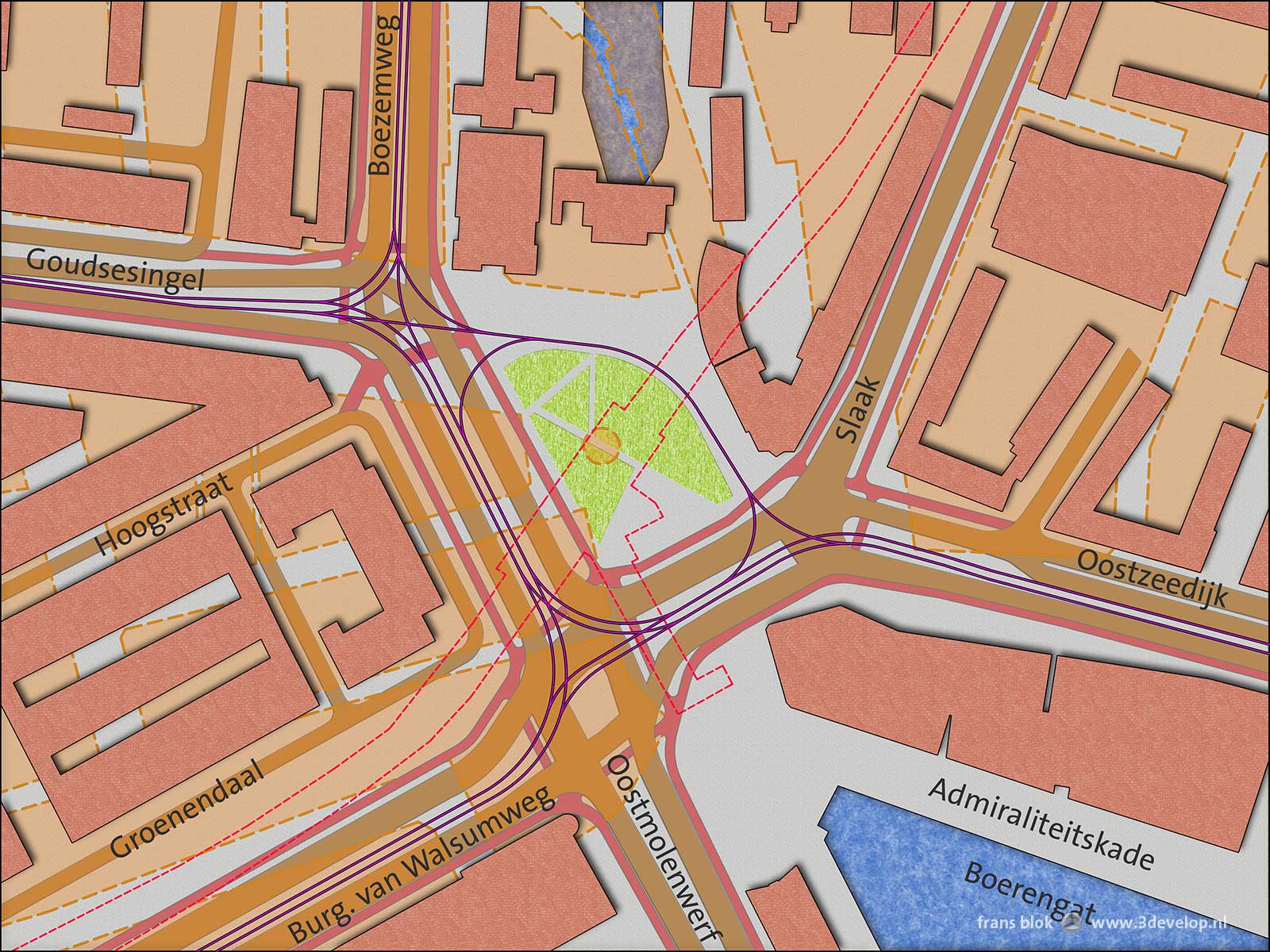 Annoyingly, that spot is just above the metro station. It’s unlikely the construction of the station is prepared to a windmill being placed on top of it. Therefore, a better place is a little further towards Goudsesingel. Not too far because too close to the apartment tower on the corner with Boezemweg could raise objections. Also, the tramway is better thought of as a given; moving it leads to unnecessary costs. Thus emerges the ideal place from where the mill is easily visible from Hoogstraat, Goudsesingel, Oostzeedijk and Oostmolenwerf/Maasboulevard: 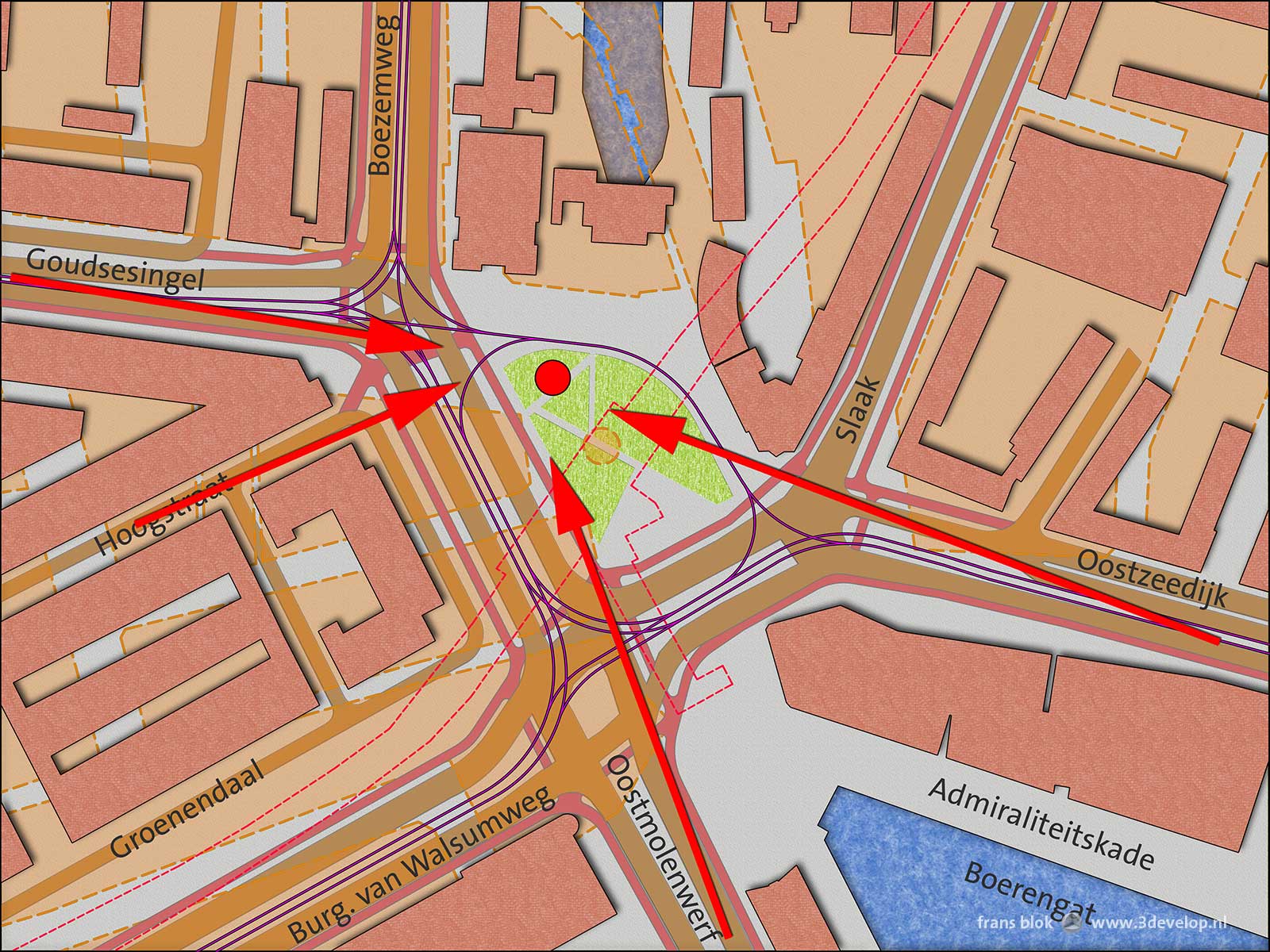 Rebuilding the windmill must be part of an extensive redevelopment of Oostplein. But the municipality is already having that in mind, so that’s fine. By replacing much of the pavement by greenery, Oostplein might even become a kind of park. It could look something like this: 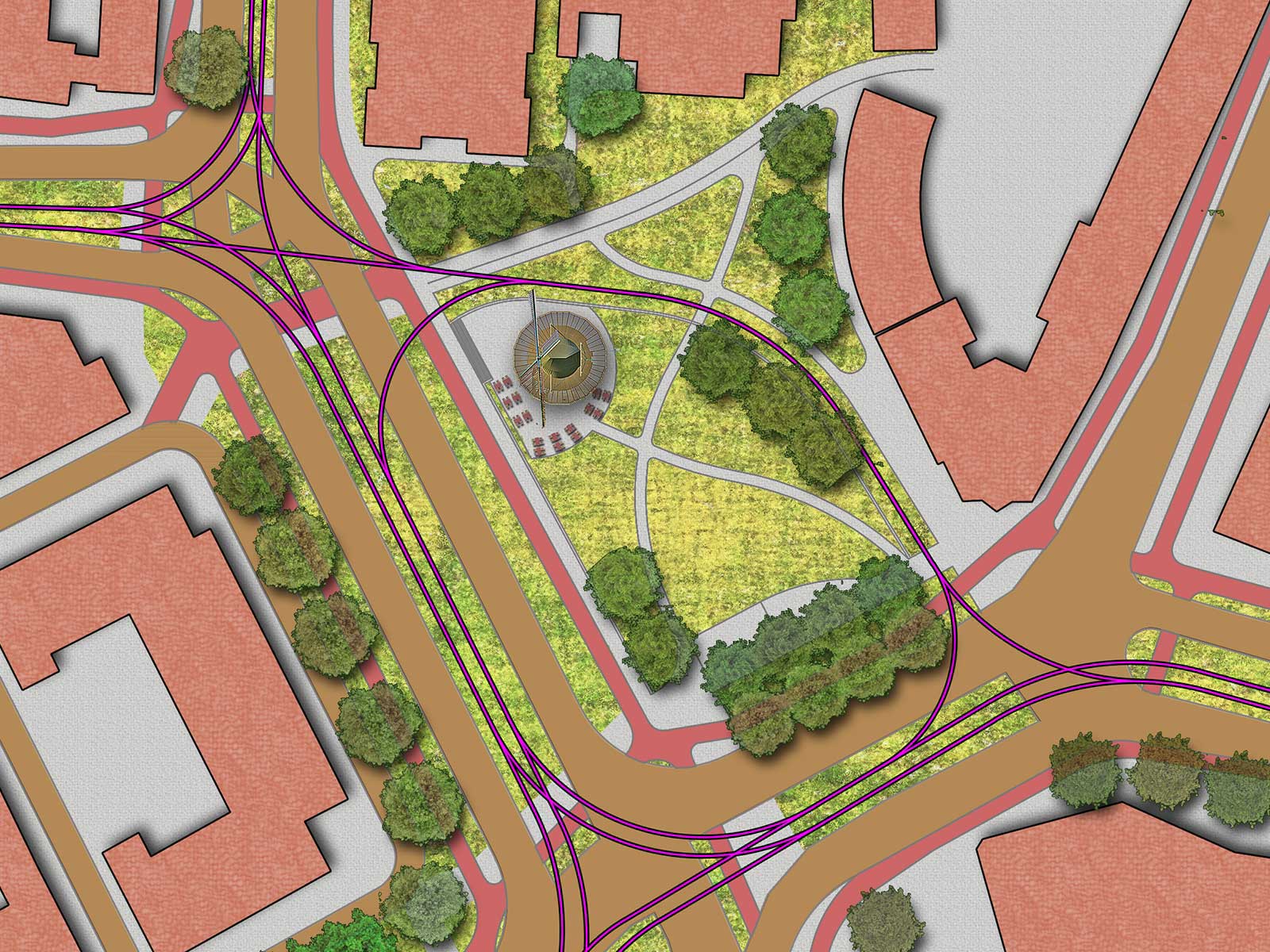