Actually, I had planned to leave it at Twitter, LinkedIn, Facebook (business and private), Pinterest, Google+, YouTube, Flickr and Behance, for the time being. Don’t get me wrong: I am very happy with all those social media because of the opportunities they offer me to show what I am doing and to get in touch with potential customers. Ten years ago I’d have to spend a fortune on advertisements in newspapers and magazines. But since you do not want to do the same on every medium, it takes a lot of time. So sometimes one has to draw a line.

In the first week of the new year however, two new social media were added to my list. First I decided to start an Instagram-account after all. As a visual artist I can’t afford to ignore a platform that is so much structured around images.

The images on Instagram have one limitation: they must be square. And that is an interesting challenge, because not every picture can be cropped to a square. This way every photo will find its way to the most suitable medium: portrait format takes advantage of the layout on Pinterest, landscape format looks better on Facebook and Twitter, for the square pictures there’s Instagram.

You don’t have to be econimical with the use of #hashtags on Instagram. It’s kind of a nuisance to do it all on your phone but maybe there is a detour for that which I have yet to discover. The result of this setup is that, faster than on other media, your photos are discovered by others than followers and friends.

The interesting thing is that with the resolution of Instagram, 640 x 640 pixels, even the photos I made ten years ago with my first digital camera still look acceptable. So I can go through my entire catalogue of an estimated 30,000 photographs looking for images that meet the Instagram criterion: it has to look good as a square on a mobile phone.

The next day I found myself on Dropon because of a blog post by Marca van den Broek. Dropon looks like a kind of missing link between Facebook and Twitter. With hearts instead of thumbs, reposts instead of shares and drops instead of hashtags.

Dropon seems to compete primarily on the field of privacy, which is not Facebook’s best feature, to put it mildly. Moreover, they are located in Canada so you have less chance that the NSA is watching.

Images look good on Dropon, which is a bonus in my kind of work. It all appears rather convincing to me. Only the users are currently missing. I made an account because you never know how big it’s going to be. And I posted an image that will never make it to Instagram because it simply cannot be cropped into a square. 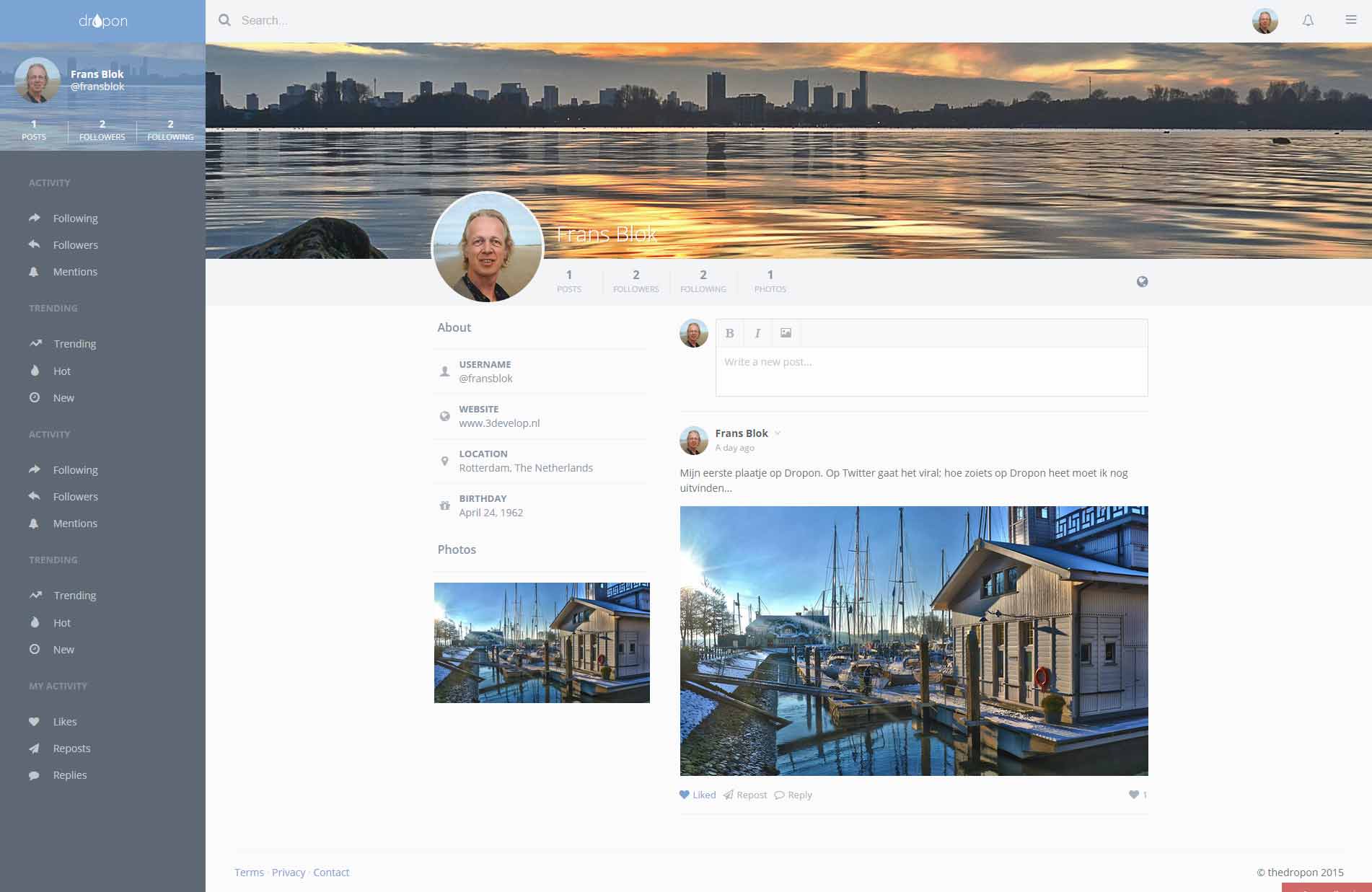 Dropon turned out not to be able to achieve enough the critical mass to become the new Facebook. During 2015 things got a little quiet there and now the site seems to be completely down.

On Instagram, in spite of my initial enthusiasm, I fell silent after a few weeks. It was a bit of a hassle to get pictures from my computer through my phone to my account. And typing on a phone screen also remains cumbersome to me.

Then I discovered Latergramme. With its free version I can schedule 30 posts per month from my PC. On the scheduled times they show up on my phone and all I need to do is confirm.

Since then I post on Instagram  every morning. And the great thing is: even for myself, it is always a surprise what I’ve planned for that day.