For some photos the window of opportunity is very small. You have to be quick, otherwise your chance is over. Think, for example, of the increasingly rare photos of the city under a nice layer of snow. Or photos taken in the blue hour after sunset, when the circumstances change by the minute.

Spring is another of those narrow windows. One moment the trees are still bare, a few days later they are full of blossoms and/or young leaves. And if you don’t act promptly, the spectacle is already over by the time you get your camera. 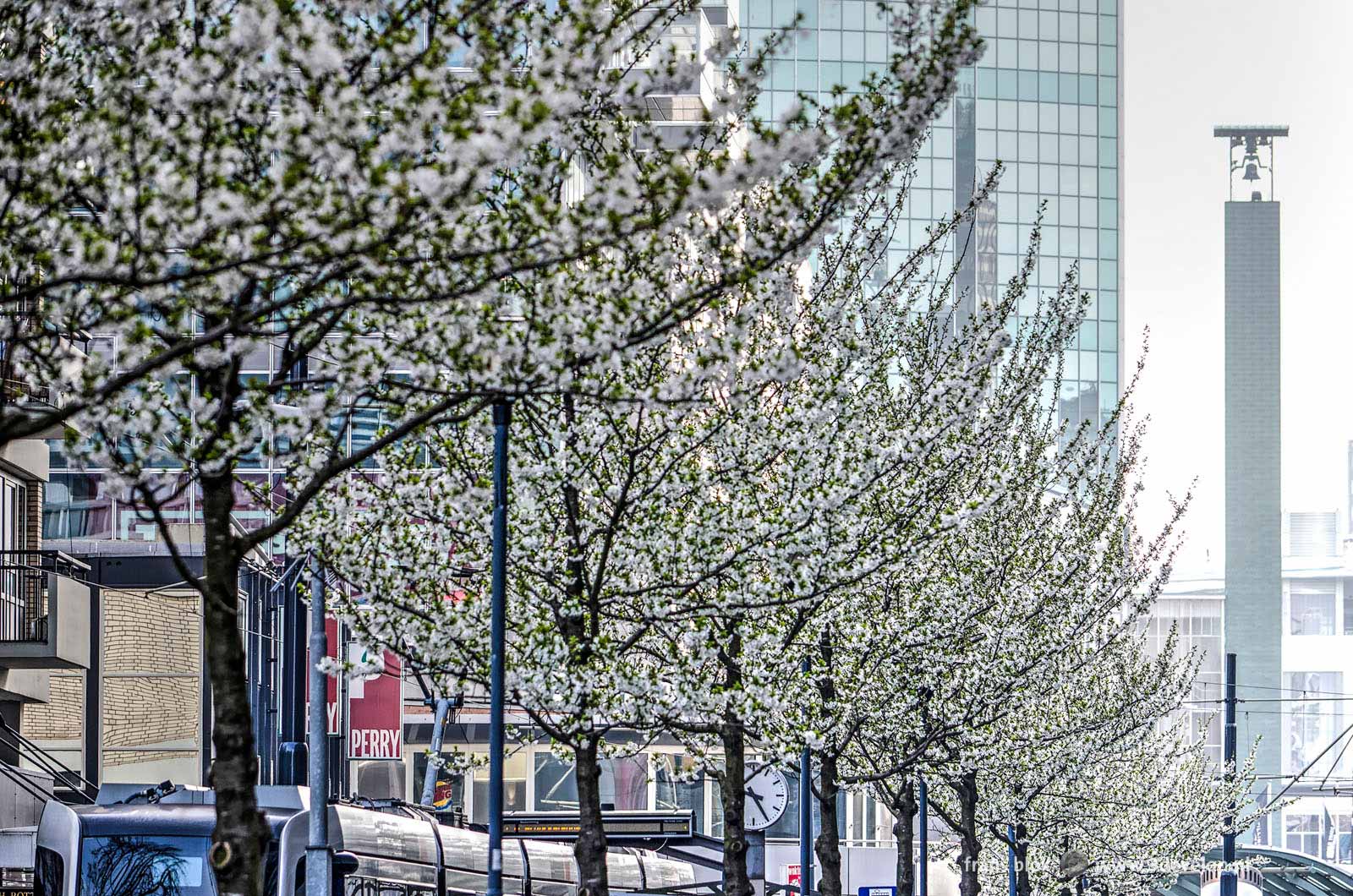 Spring was a little late this year. The photo above, showing the white blossoms in my own street, Van Oldenbarneveltplaats, dates from April 10. In 2017, these cherries flowered almost two weeks earlier. The explanation can, of course, be found in what I called the sandwich winter, which was actually quite mild but in March at the last minute showed some teeth.

Once the spring really starts, the magnolia is one of the first trees that is in bloom. Then you suddenly notice how many magnolias there are. The rest of the year it is a fairly inconspicuous tree but during those one or two weeks in April it attracts all attention. 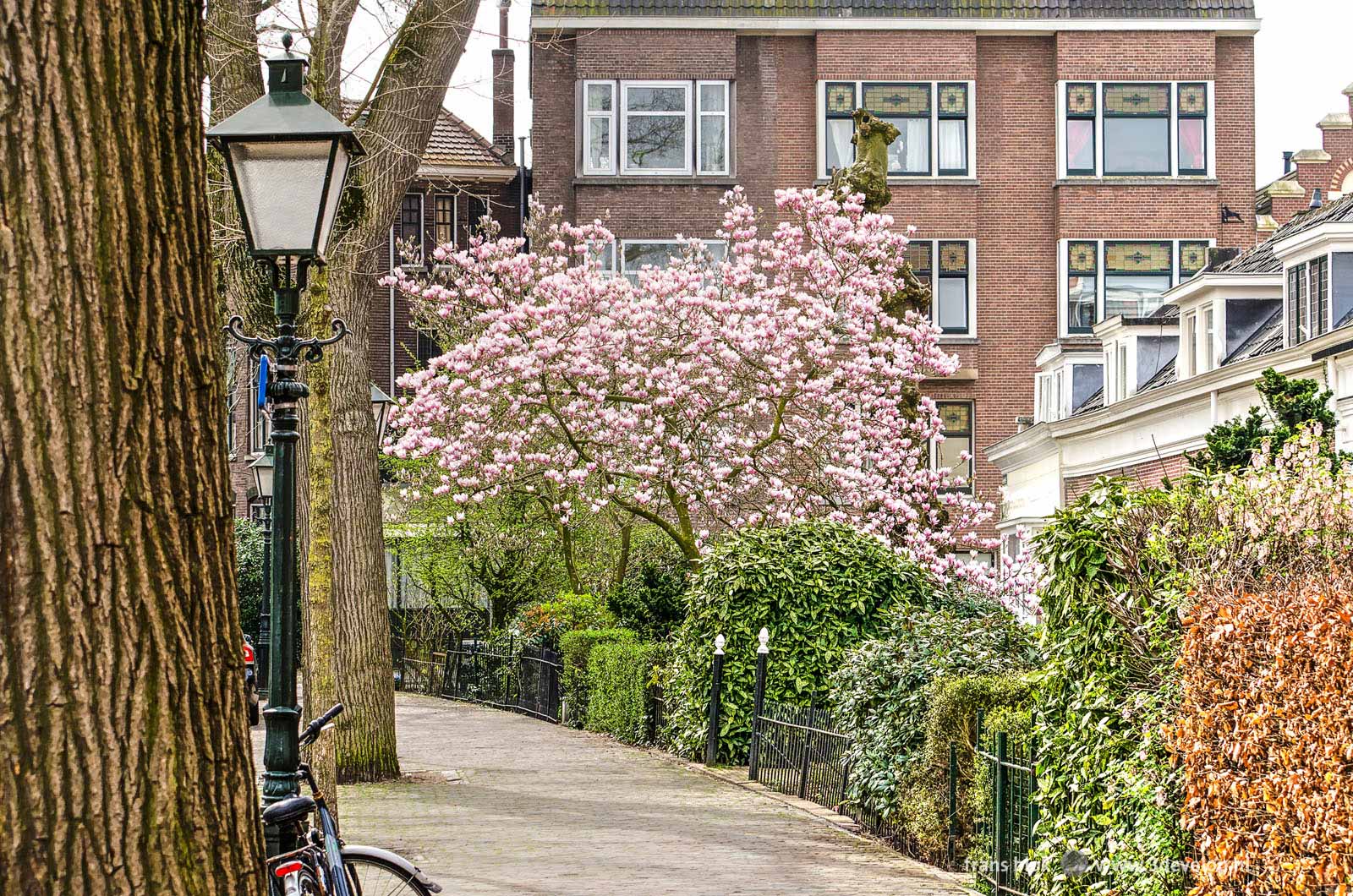 Magnolias are mainly found  in private gardens, but there are also a few at the Timmerhuis and the Willemskade. A whole street full of magnolias would be fun; can that be arranged, municipality of Rotterdam? 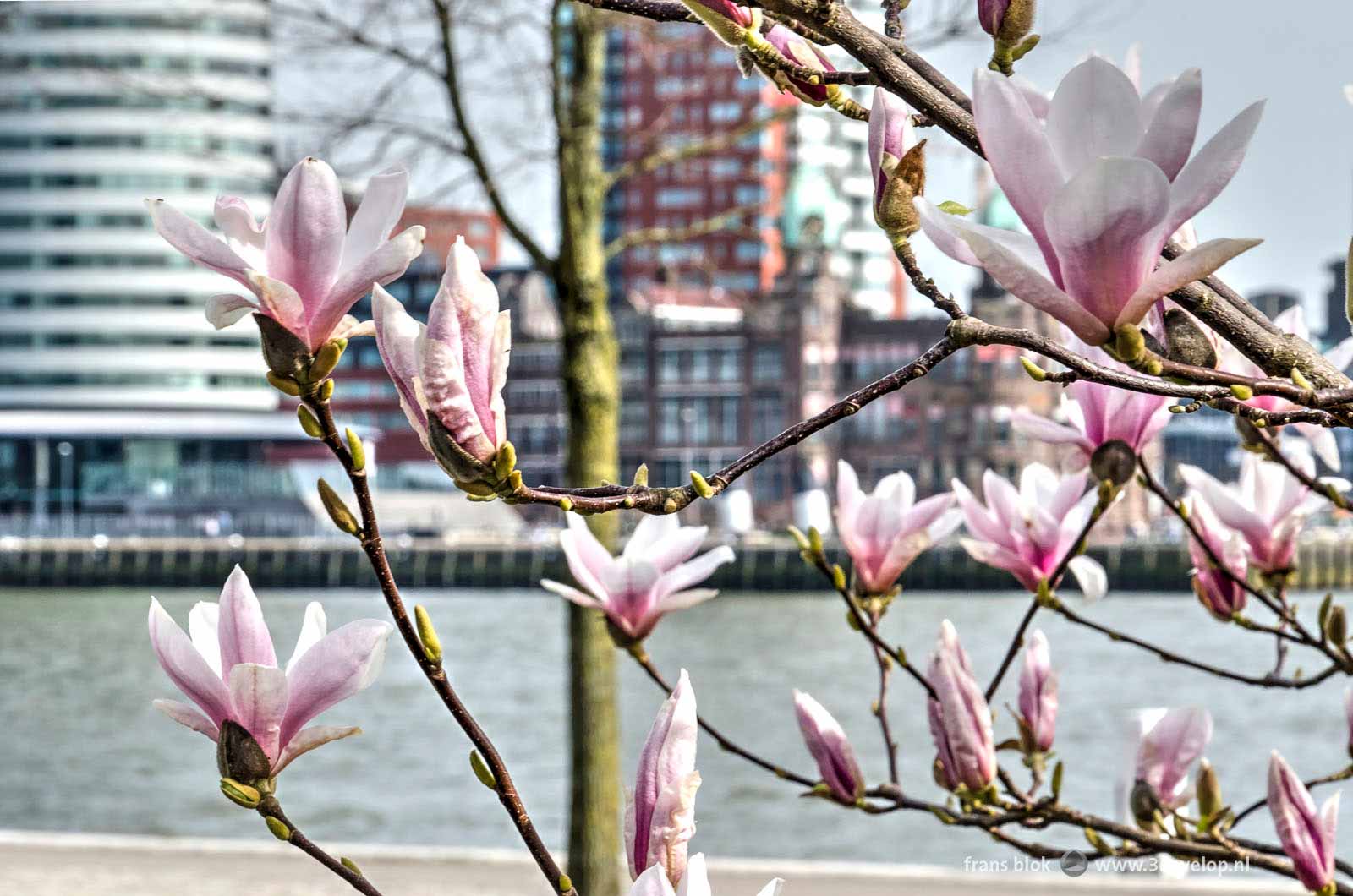 But the queen of spring is really the prunus. There are several types, but I’m especially thinking of the Japanese flowering cherry with its lush pink blossom.

Prunuses are remarkably often located in ugly places, such as in gardens of horrible housing from the 1970’s or in streets full of parked cars. As we say in dutch: a flag on a mud barge. But there are exceptions like here at the Van Nelle factory. 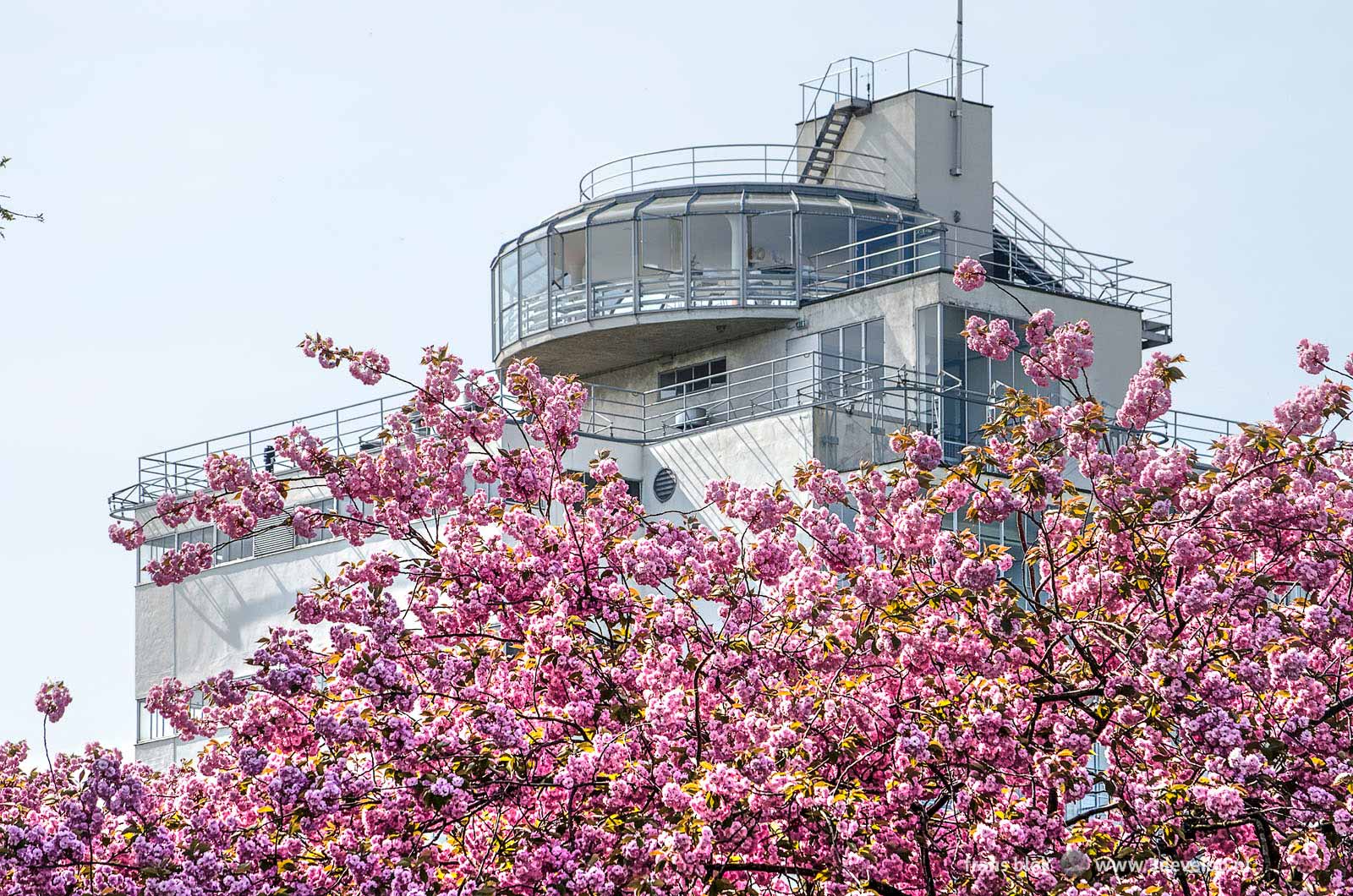 These prunuses in front of the Russian church on Vasteland have also found a nice spot for themselves. 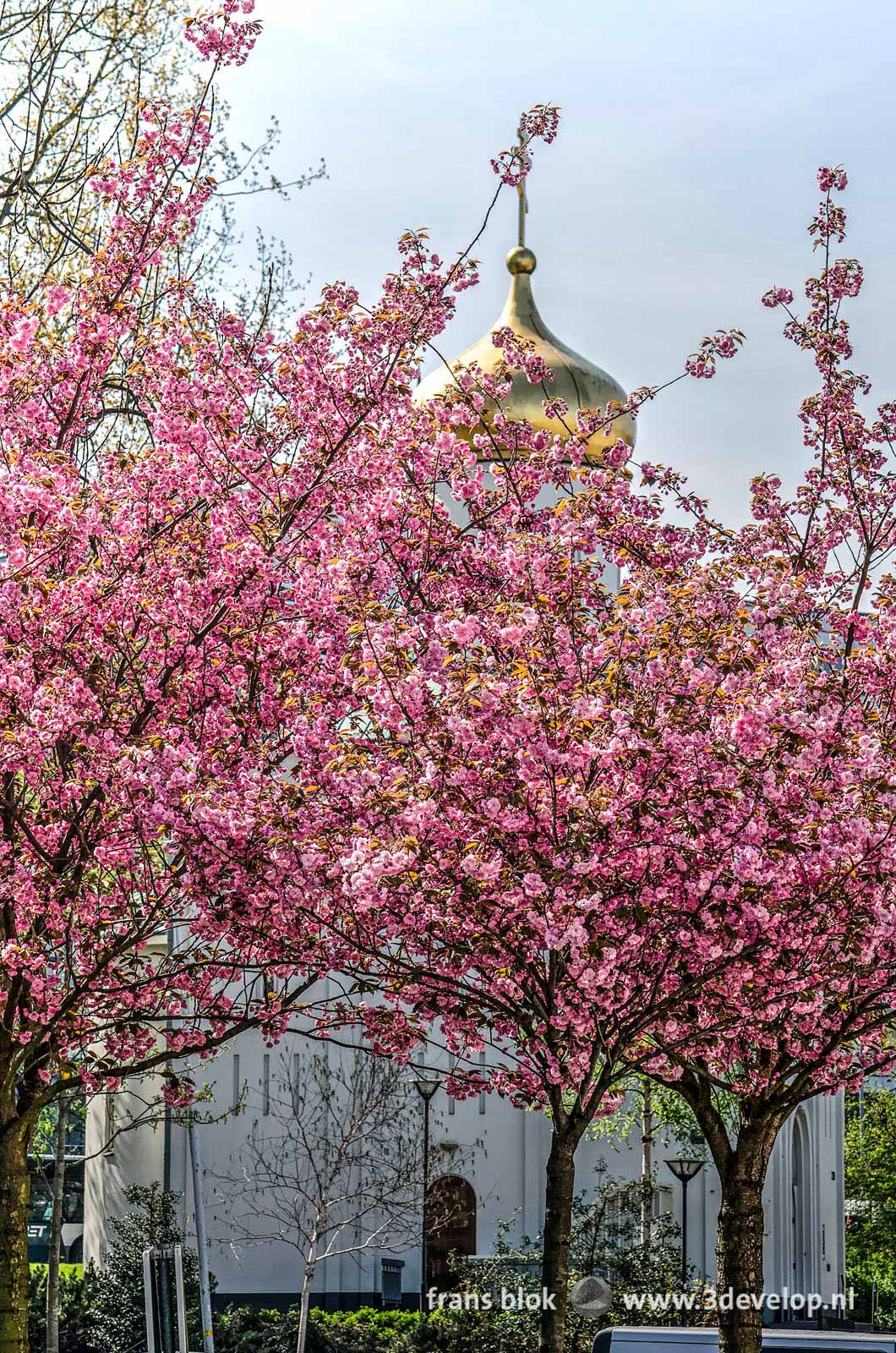 And sometimes a prunus is in such an aesthetically unpleasant location that it’s no longer awkward. This admirable specimen manages to stay alive on an unsightly industrial estate at the Mallegat in the district of Feijenoord. Whether it will continue to do so for a much longer is questionable because it is located more or less on the center spot of the proposed new stadium for football club Feyenoord. I think it should be transplanted to a place of honor in future Feyenoord City! 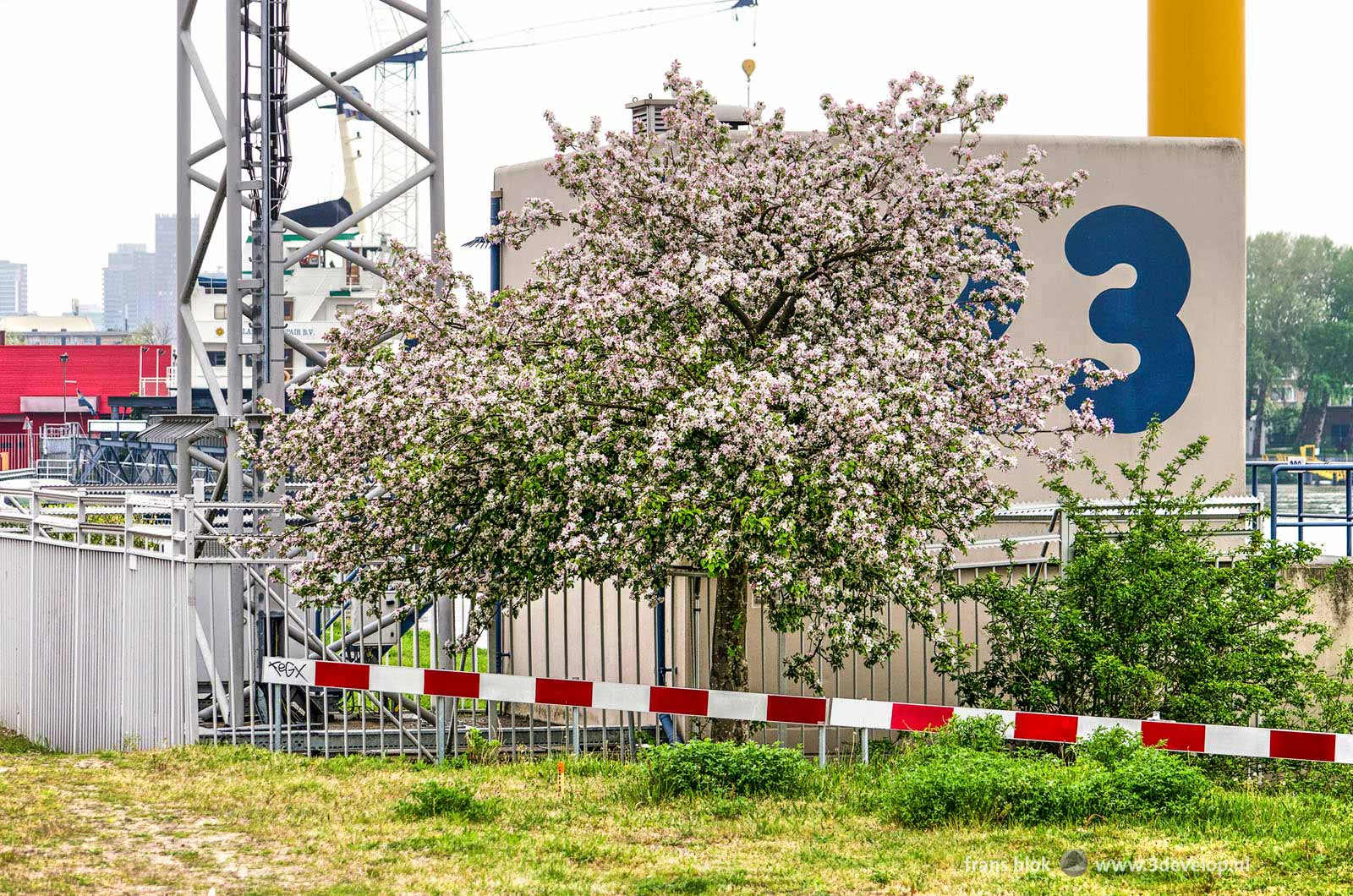 A tree which at first sight looks a bit like the prunus but which blossoms a little later is the cercidiphyllum japonicum. In Dutch it has names like heart tree, judas tree and cake tree but in english it’s known by it’s Japanse name: katsura. In the center of Rotterdam it can be found on Binnenwegplein and at the Central Station, although those ones are in fact more bushes than trees. 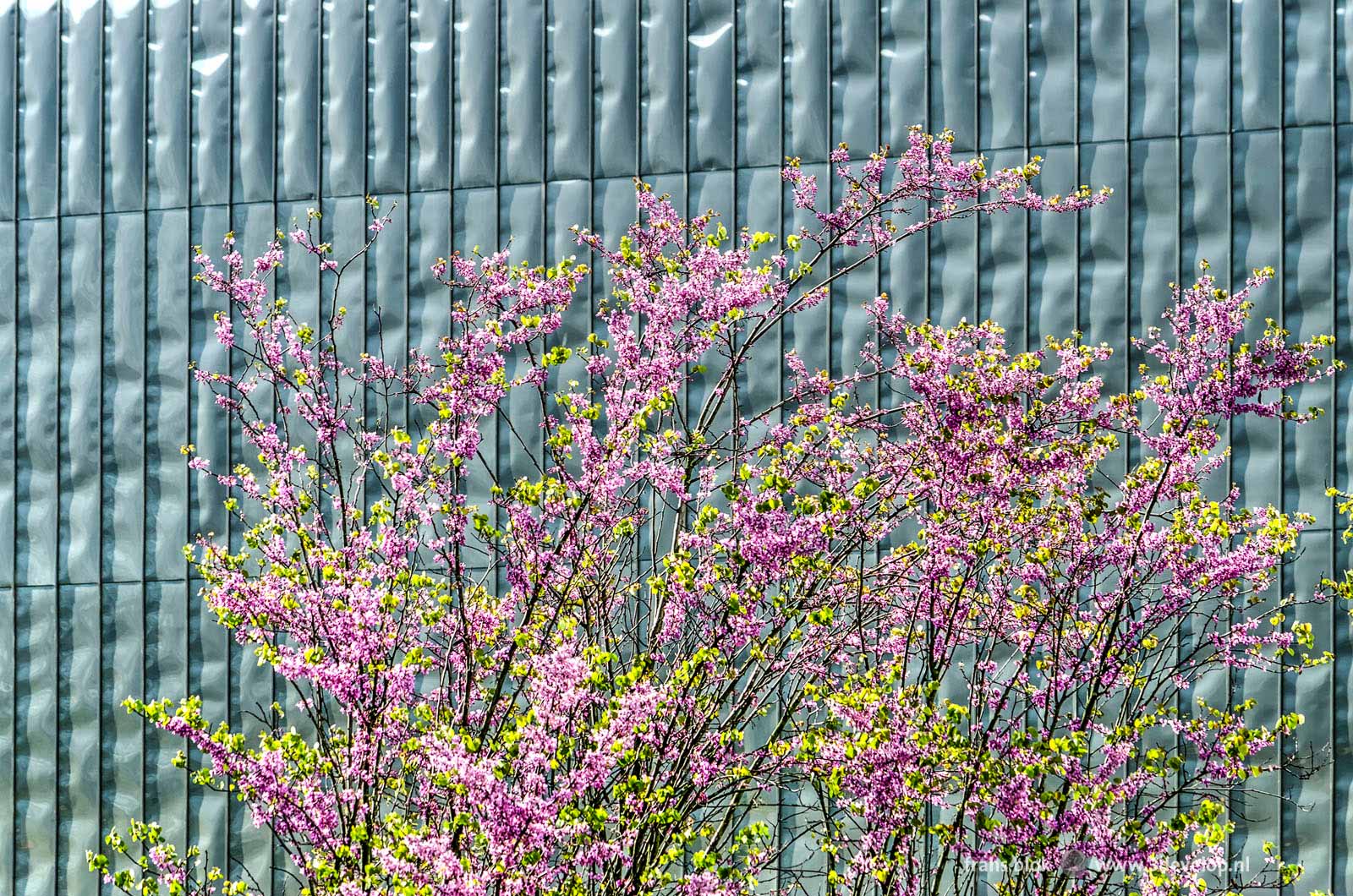 And let’s not forget the chestnuts. A joy for the eye all year round, but certainly in springtime, when for a few weeks they’re equipped with candles (as the chestnut blossom is officially called). In the park in front of my flat is a beautiful one, of which I made this spring animation a few years ago.

The red chestnuts provide some extra color. Rotterdam citizens immediately see where this picture was taken: on Mariniersweg near the Cube Houses. 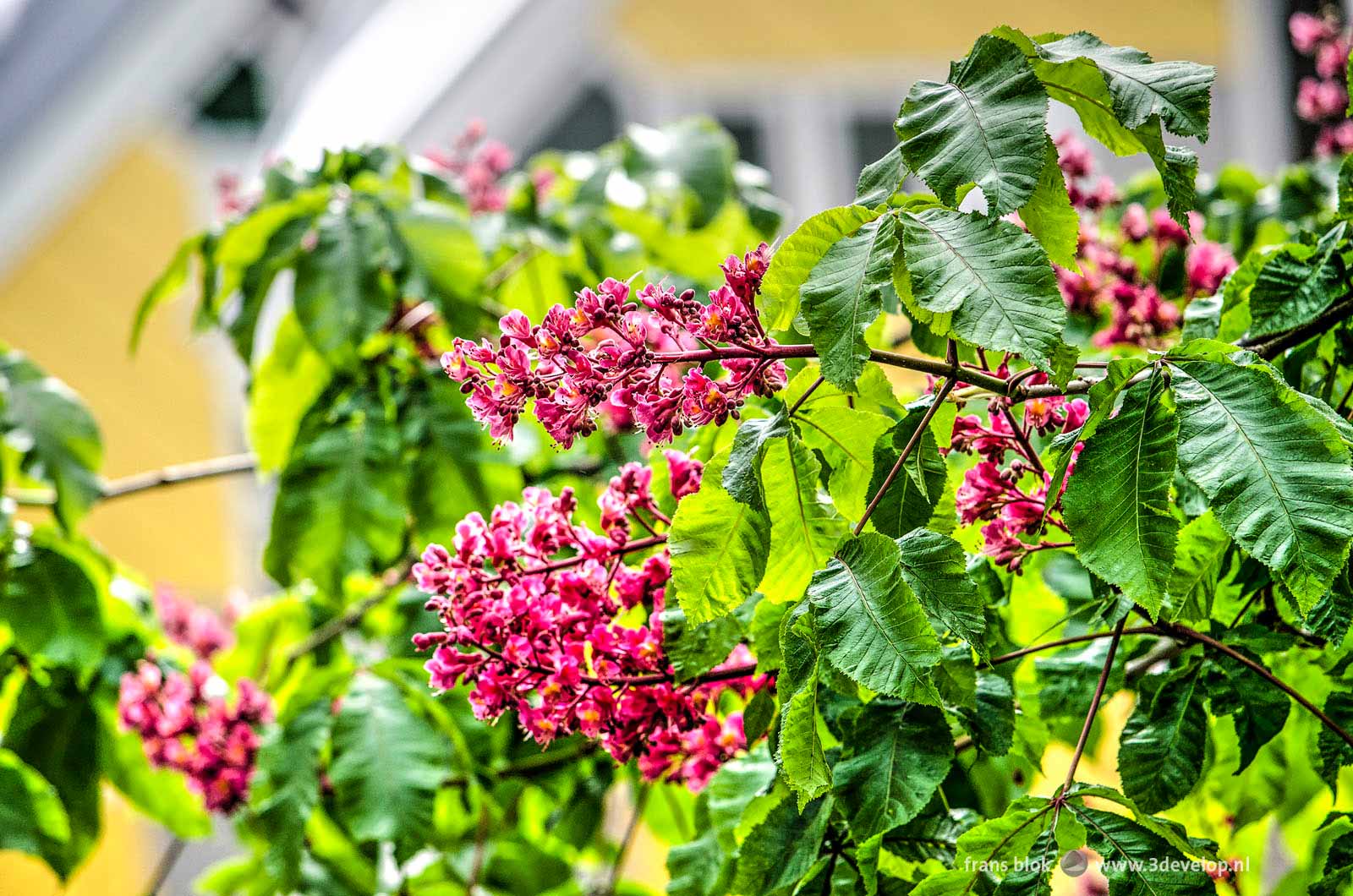 A tree that I somehow never really noticed until this spring is the robinia pseudoacacia or the black locust. Maybe the robinia bloomed more exuberantly than usual this year due to the warm weather. And there’s in fact not much black about it. 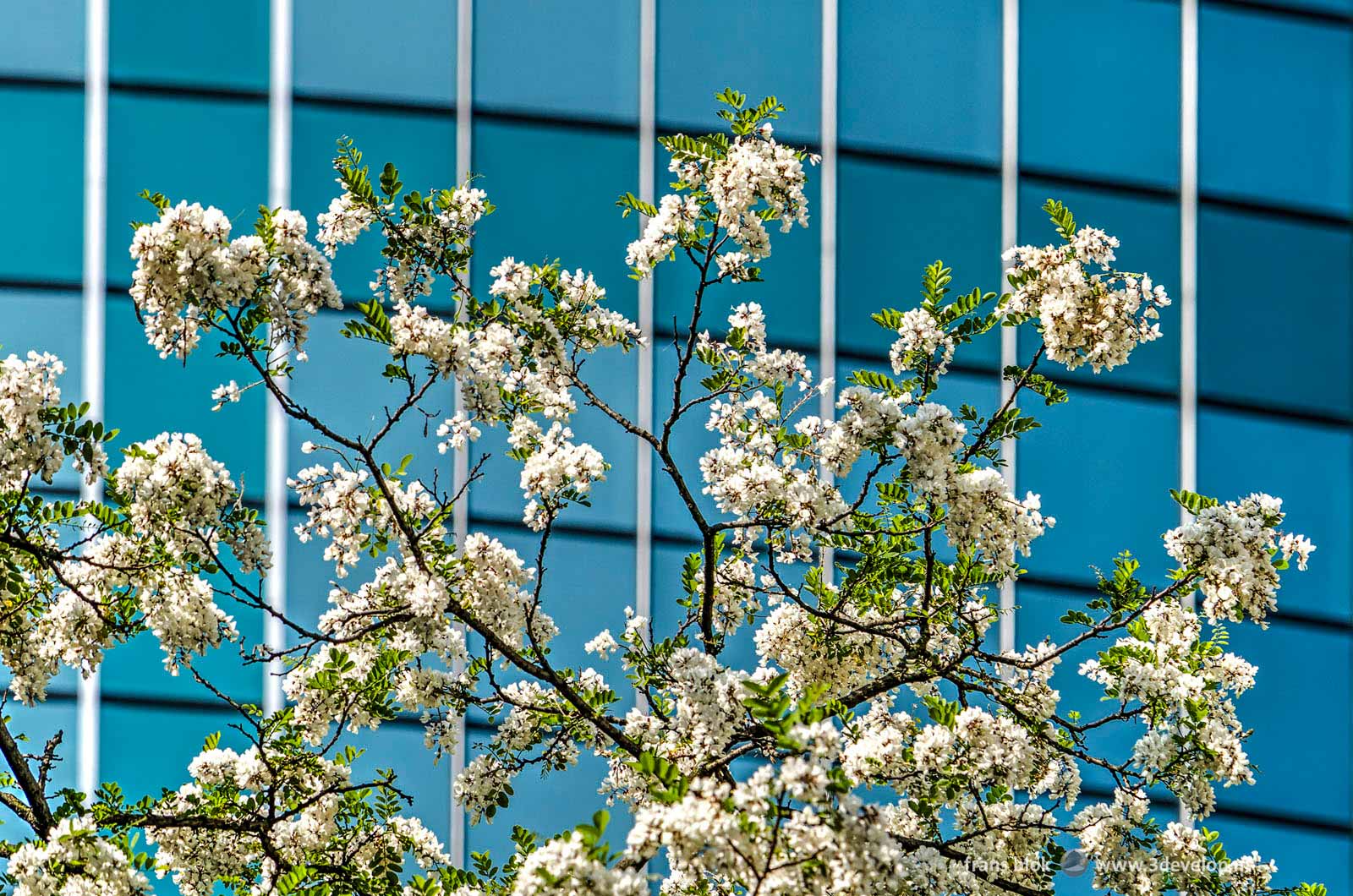 Suddenly entire streets appeared to be planted with robinias, such as Nieuwe Binnenweg and Witte de Withstraat. The Witte de With Institute  which is looking for a new name because of the link of its current name with slavery and colonialism, may consider to call themselves the Robinia Institute. 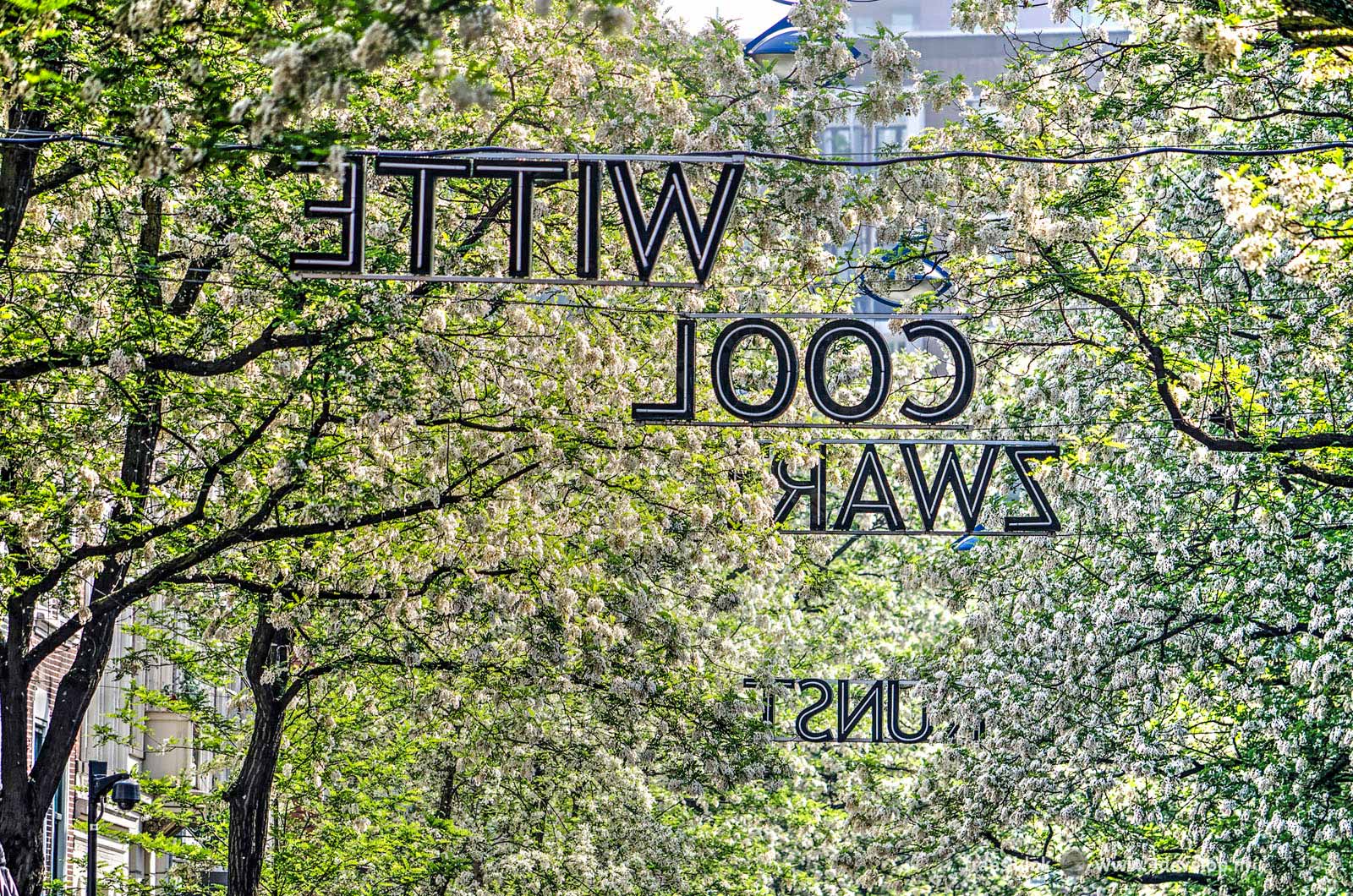 Now that May is slowly coming to an end, the party is over, more or less. In the coming months all trees will look almost the same. Everything has the same dark green color; neither ugly nor unpleasant, but also not really spectacular. Fortunately, a new window of opportunity will open in about four months: the autumn window.