Half a year ago I wrote about my first visit to Kaleidoscopia, that magic kingdom where ordinary photographs are transformed into colorful abstract patterns.

A few weeks ago I returned to Kaleidoscopia. But while I first used photos of fallen leaves and other autumn scenes, I now submitted pictures of blossom, young leaves and similar springtime scenes to my kaleidoscopic Photoshop actions.

The result: 35 new kaleidoscopies, collected below on a tiled wall (and if you think it’s a quilt: be my guest). The question is of course: do these springtime patterns have an essentially different atmosphere than the autumn series? 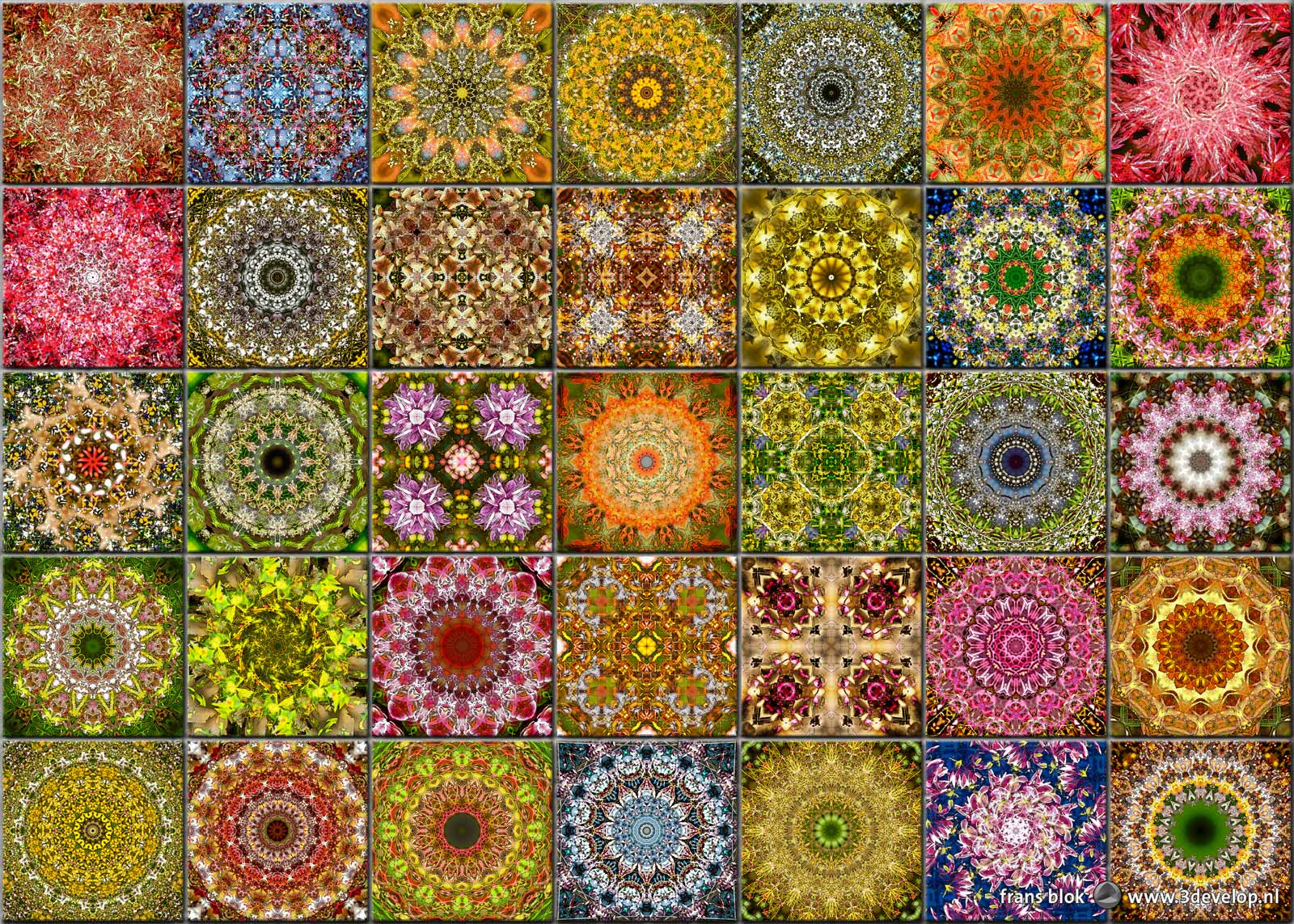 With every submitted photograph it’s a pleasure to see the fascinating patterns that this mathematical processing leads to. The colors remain, sometimes there are recognizable shapes, but in many cases not much from the original image can be identified.

If you look closely you may notice that there are roughly three different kinds of patterns: mandalas, milky ways and … (hm, well, I’ll come back to that …)

The word mandala is Sanskrit for circle. In Tibetan Buddhism the term is used for a geometric pattern that symbolizes the cosmos. My kaleidoscopic mandalas are produced by a twelve-fold rotation, which often generates a kind of hybrid between a circle and a star. 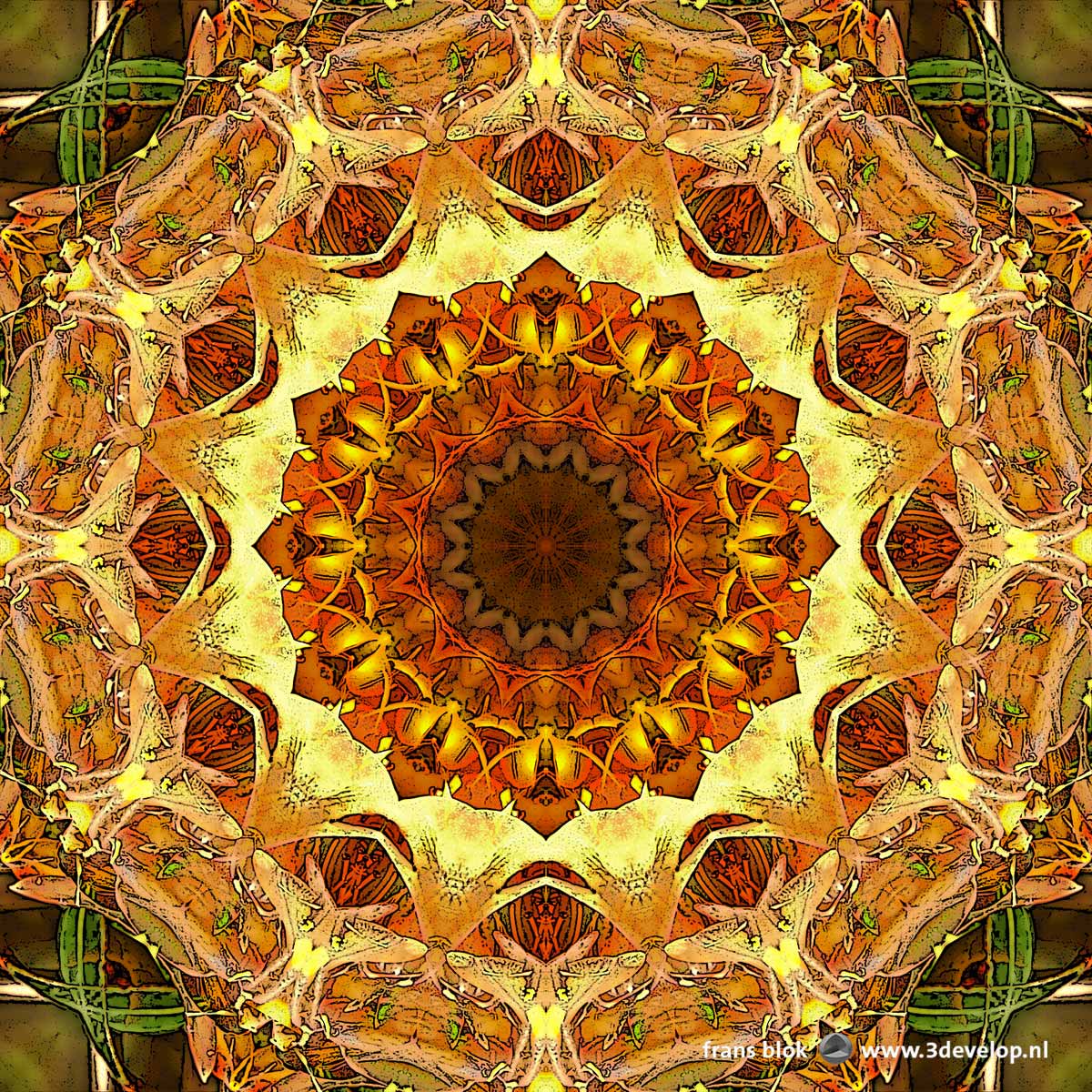 We know the Milky Way as a elongated bright area in the night sky, but that is because we’re in the outer regions of that same Milky Way and we are looking at it sideways. From above, the Milky Way galaxy, with its characteristic spiral arms, looks like a kind of vortex. There are some hundred billion other spiral galaxies in the universe, by the way. 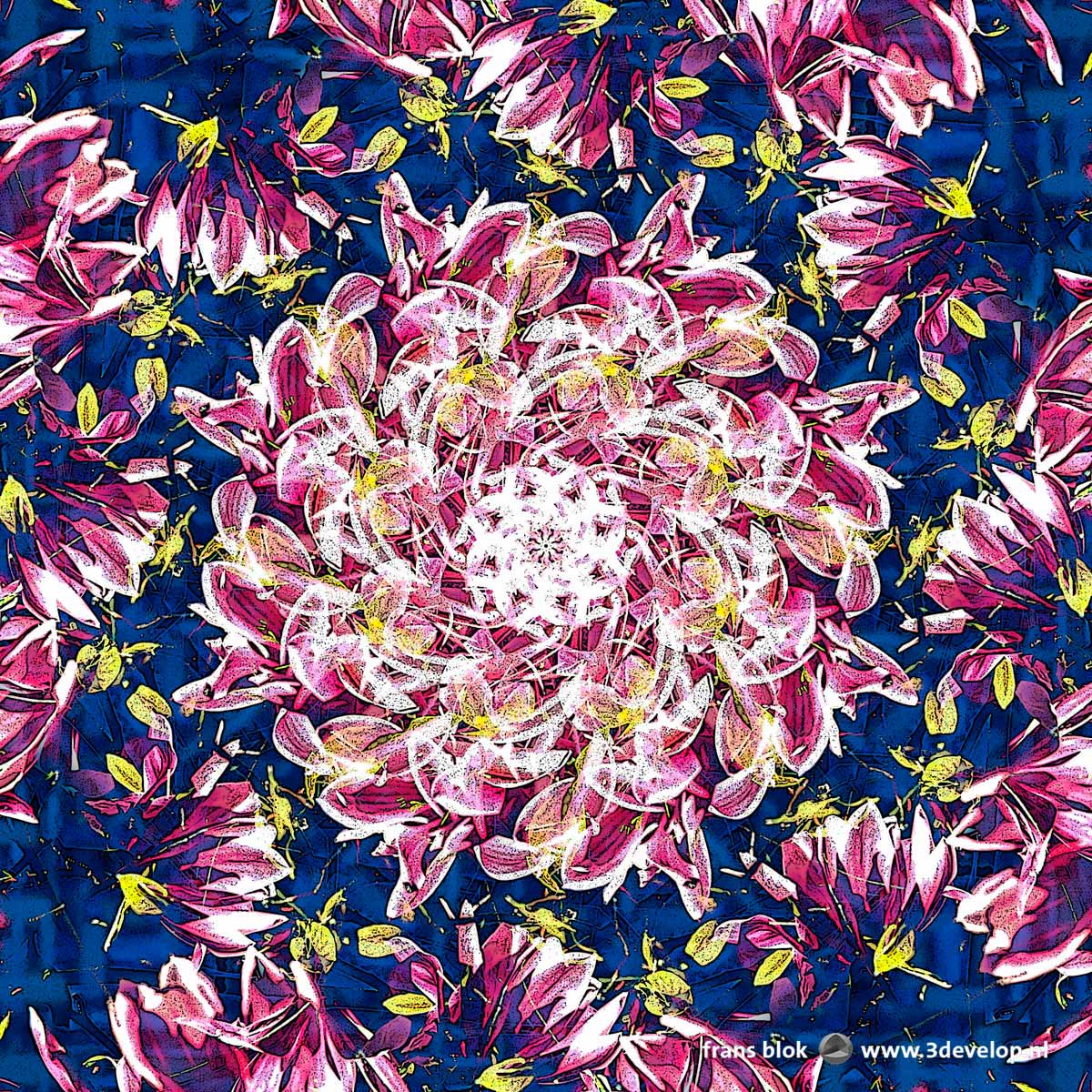 I racked my brains to come up with a name starting with an M for the third category of patterns, but unfortunately the English language, like the Dutch, seems to be inadequate. These images somehow remind me of flower beds in symmetrical gardens like in Versailles. Anyone who knows a fitting M-word , please leave your suggestion in the comments below. 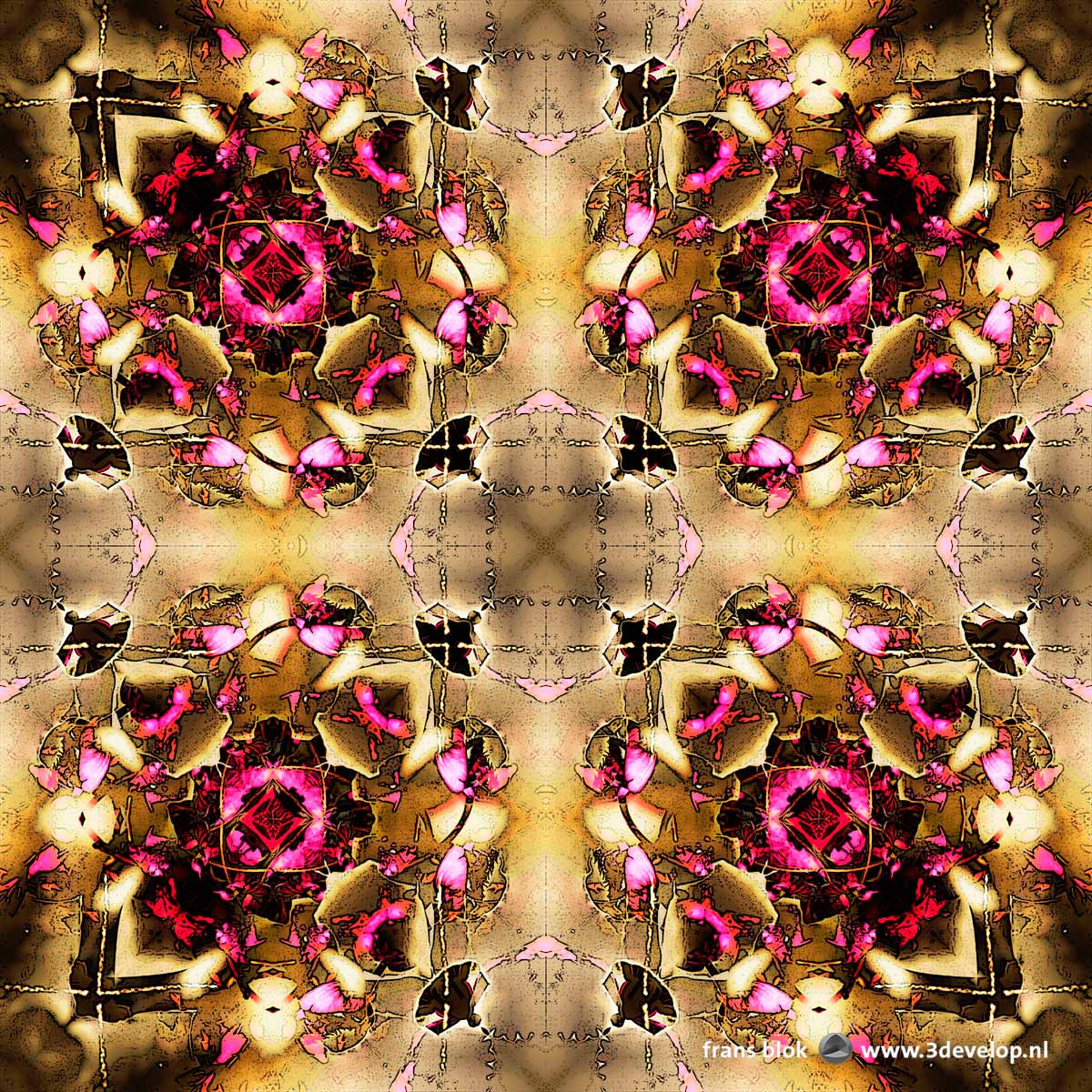 I don’t like works of art which have the name”untitled”, so like with the previous series, I made an effort to come up with a name for every piece. Sometimes inspired by the original photo (Magnolia Quartet), sometimes by the end result (Fin de Siècle), sometimes by both (Pompelmo e Tulipani).

These kaleidoscopies are, of course, perfect as wall decorations. The works below are available in every conceivable format, including canvas, aluminum, wallpaper, xpozer, steel and wood, in my OhMyPrints webshop. Three of them were recently selected for the OhMyPrints trend collection Flower Power: Queen Azalea, Purple Fuchsia and Pompelmo e Tulipani. Genuine wallflowers …

OhMyPrints ship to every adress in The Netherlands, Belgium, Germany and France. If you live outside of that priviliged part of the world, don’t despair: I also have a webshop at Pixels.com, which delivers worldwide. And they also print on throw pillows, duvet covers, tote bags, coffee mugs, yoga mats, phone cases and beach towels.