If you’ve been reading my blog (for example, take the article on the old Bijenkorf or windmill De Noord) you know that I’m really interested in the history and architecture of Rotterdam. And that’s not just because I live there. What fascinates me is that there are actually two different cities. These two cities share the same location, but are separated from each other by time. With one major breaking point: the day of the bombing, May 14, 1940. Of course, other cities have changed enormously as well since, say, the thirties. But nowhere the changes have been as dramatic as in Rotterdam.

The destruction of the street plan

Not only buildings were destroyed by the bombing and the fire that followed. The disaster was also seized as an opportunity to completely mess up the street pattern of the city. In the Basic Plan for the Reconstruction only a few historical lines were still recognizable: Coolsingel, Binnenrotte, Goudsesingel. And also that reconstruction plan was modified many times in the course of the years. A Rotterdammer from 1939 that would suddenly be beamed up to our time would be completely disoriented.

To my surprise I could not find a map that compares those two streetplans. So I decided to make such a map myself: 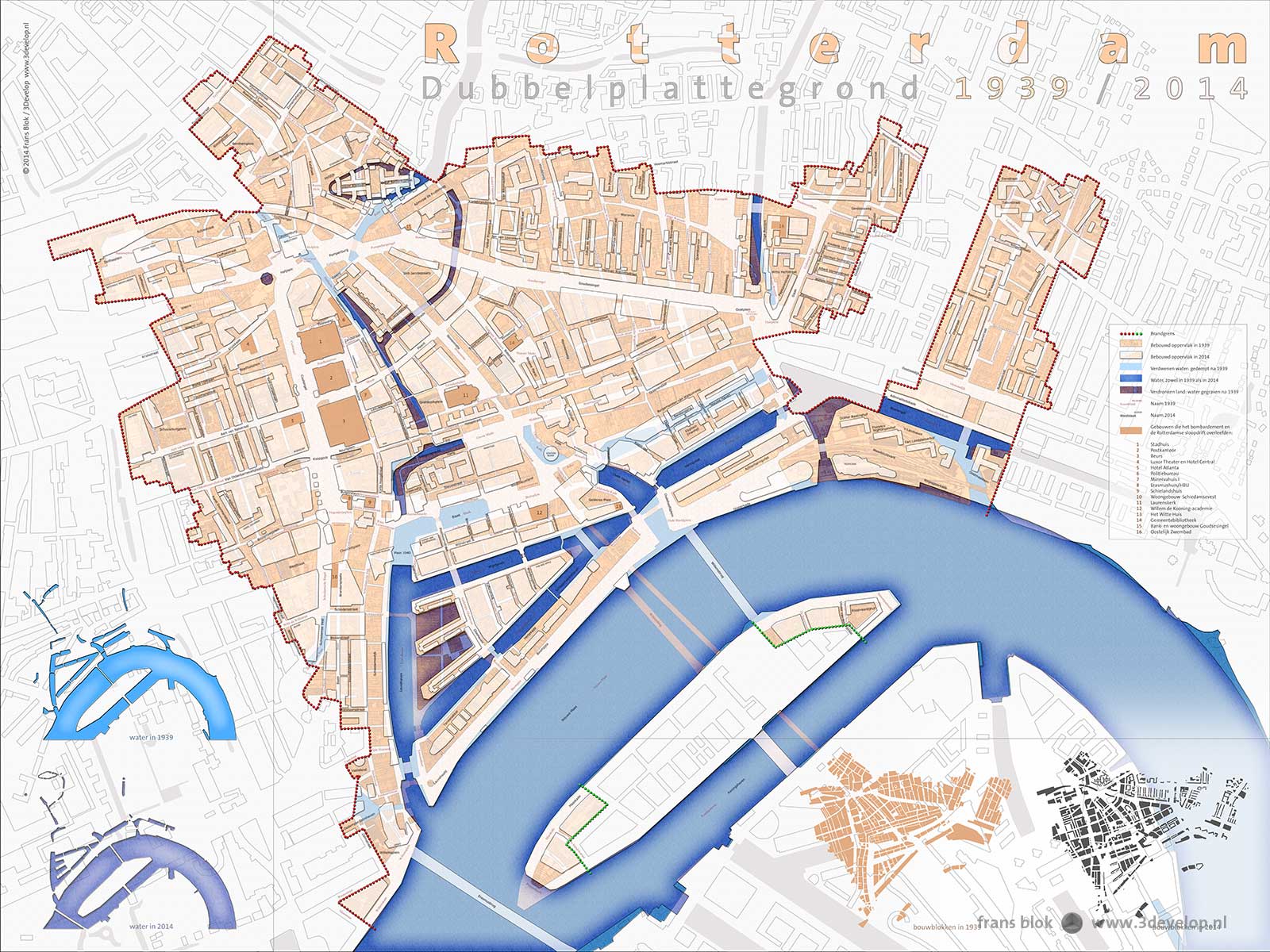 The city as a campus

On this map it’s easy to see that the new city is much more spacious than prewar Rotterdam. That was also the intention of the reconstruction plan. But one might still wish all that extra space to be a bit less stony. The whole city center could be one big park, or at least a kind of campus: buildings scattered among the greenery. Fortunately, the last few years we’ve seen a slow development in the right direction.

Also interesting is the change of the watercourses in the city. After the bombing, Schie, Nieuwe Haven, Blaak and Schiedamsevest were filled up with debris. A crying shame, but new water was created as well: the side harbours of Leuvehaven, the Stokviswater (parallel to Meent), and the water in the Heliport “gnome village”. Too bad Rotterdam is not always using its banks in an optimal way.

If we zoom in on the area surrounding Hofplein we see how dramatic the differences are. The square has moved quite a bit to the west. At the location of the roundabout with the fountain there used to be a housing block at the end of “Zoo Avenue” (Diergaardesingel). And the (former) Shell tower actually turns out to be in the middle of the Schie. Only a few pre-war buildings are still there: the town hall (1), the old Luxor Theater (4), the police office (6) and a small building on Goudsesingel (15); attachment points between the old and the new city. 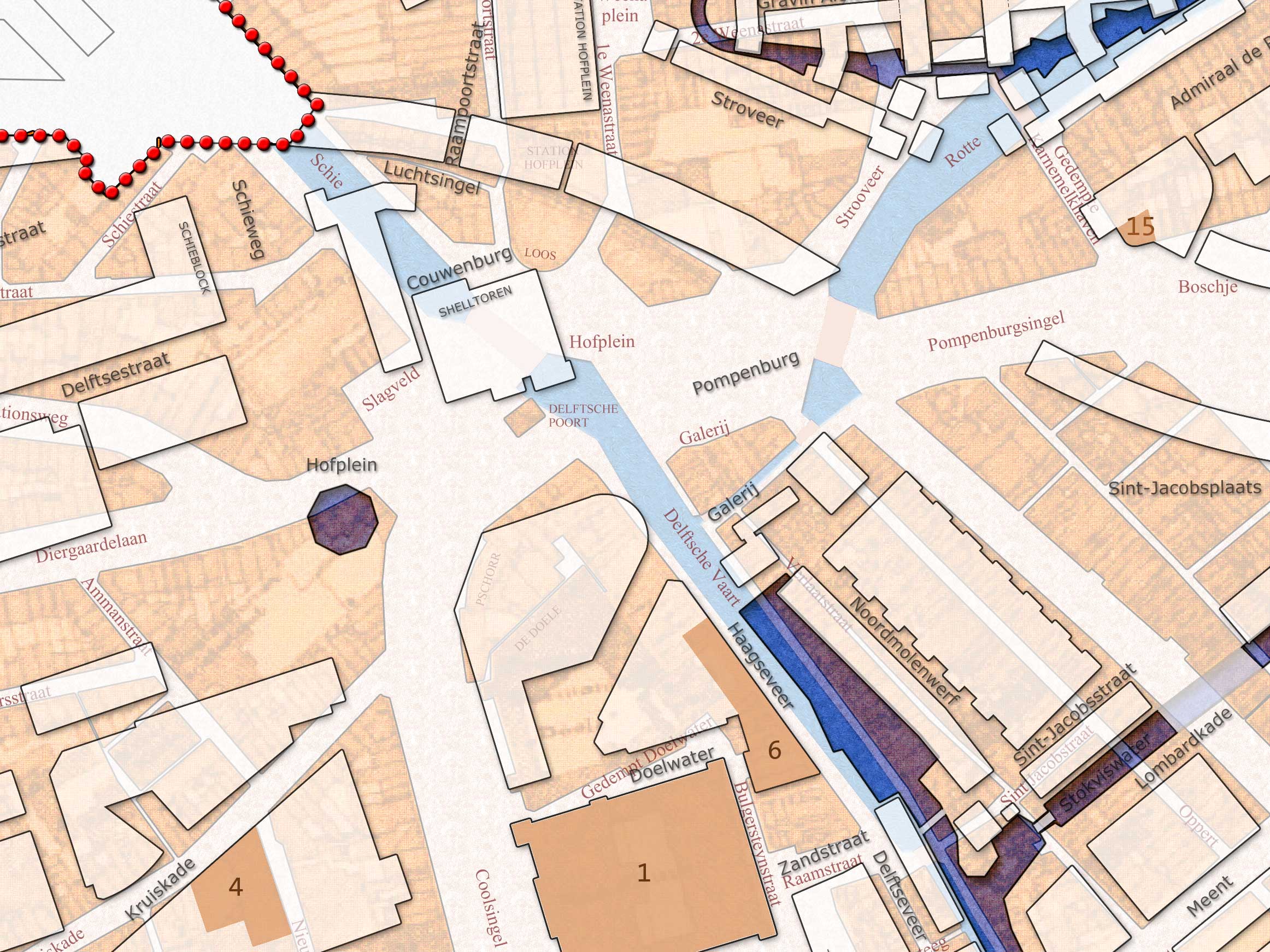 The bend in Hoogstraat

Also in the eastern part of the old city triangle the differences are spectacular. I’ve always thought that at least Hoogstraat (just above the centre of the map below) was still in its original location. But that street appears to be making a subtle bend near the library and as a result no building line has remained the same in this area. In the upper right corner we see that also Oostplein, like Hofplein, moved considerably in western direction. And of course the disappearance of the Nieuwe Haven (lower half of the map) is appalling. At the site of this former canal now runs a tiny residential street with architecture from the 1980’s, still bearing the name Nieuwe Haven. 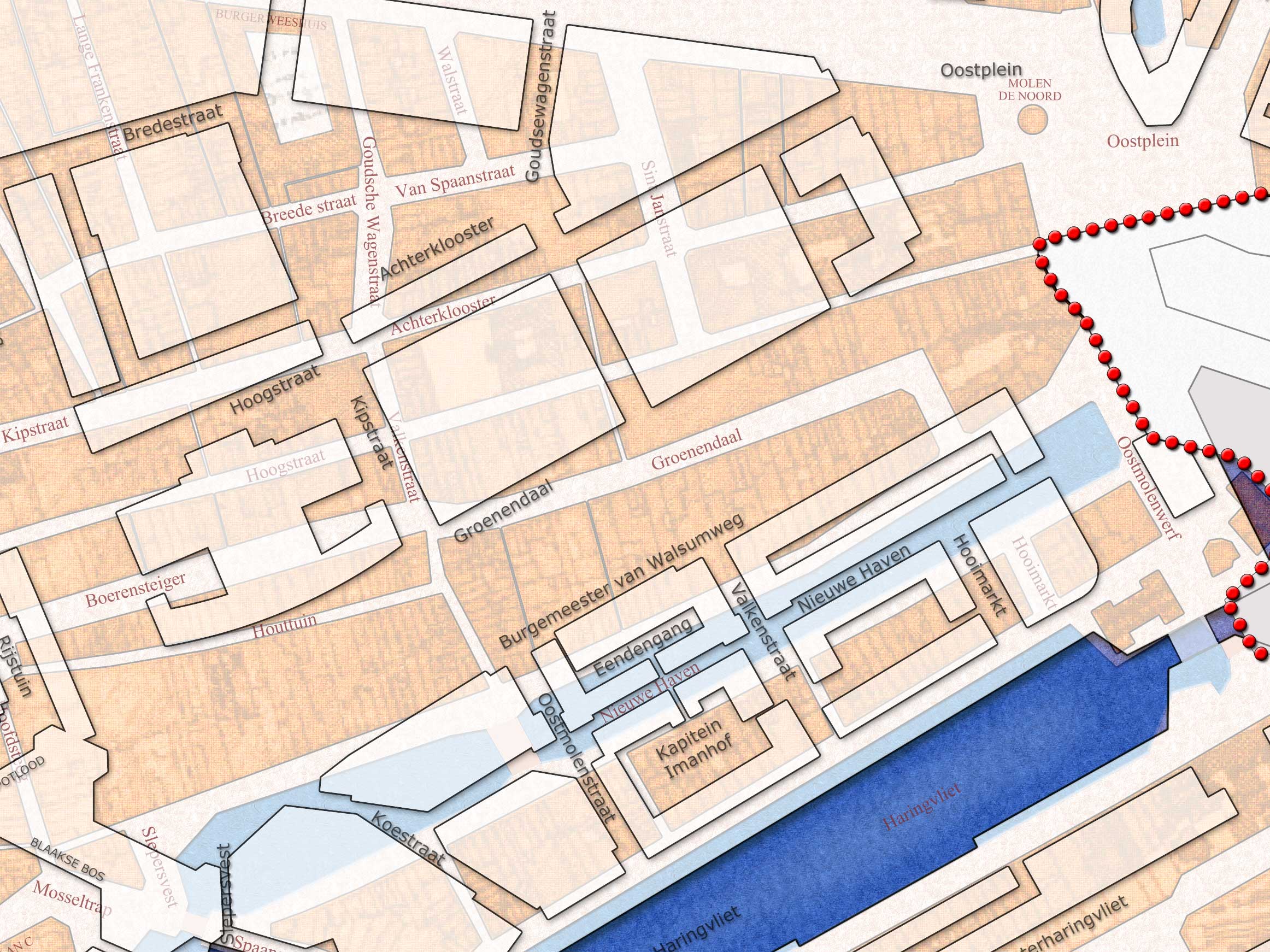 It’s funny to see so many old street names are still being used, although the street itself is often only in the vicinity of its prewar namesake. Kruisstraat, Kipstraat and Zandstraat, for example, used to run more or less perpendicular to their current direction. Some names were reborn in a completely different appearance: before 1940 the name Weena, now one of the most important traffic arteries, was found in a couple of small streets and a square north of Hofplein. I can understand that the name Slagveld (Battlefield) did not return after the war. But can’t we find a new use for names like the Farmer’s Jetty and the Closed Buttermilk Harbour?

It is a pity that the old city is so poorly visible in the new Rotterdam. I think the fact that under the current center a totally different city is hidden is a unique selling point. It should be possible to do more with our recent history. This is possible in various ways: by rebuilding some old buildings (yes, the Bijenkorf and windmill De Noord), or by bringing the prewar water back on some locations (Schiedamsevest perhaps?) But it can also be done more subtly, like showing the old building blocks in the pavement, planting or lighting. Or even by information panels or commemorative tiles: “Here was formerly the Boschje”.

The Double Streetmap Rotterdam 1939/2014 is, in a slightly improved version, now for sale in my online galery.