In my Christmas Blog, Lights on the Shortest Day, I actually already announced a follow-up post. Also about photography in the blue and the golden hours, but about the early variants, around sunrise. They’re at impossible times for a normal human being during much of the year, but in the weeks around New Year they’re not completely off-limits. Not even for people who don’t like getting up too early.

Therefore, I have used this narrow window of opportunity to go into town with my camera early in the morning, not less than eight times. 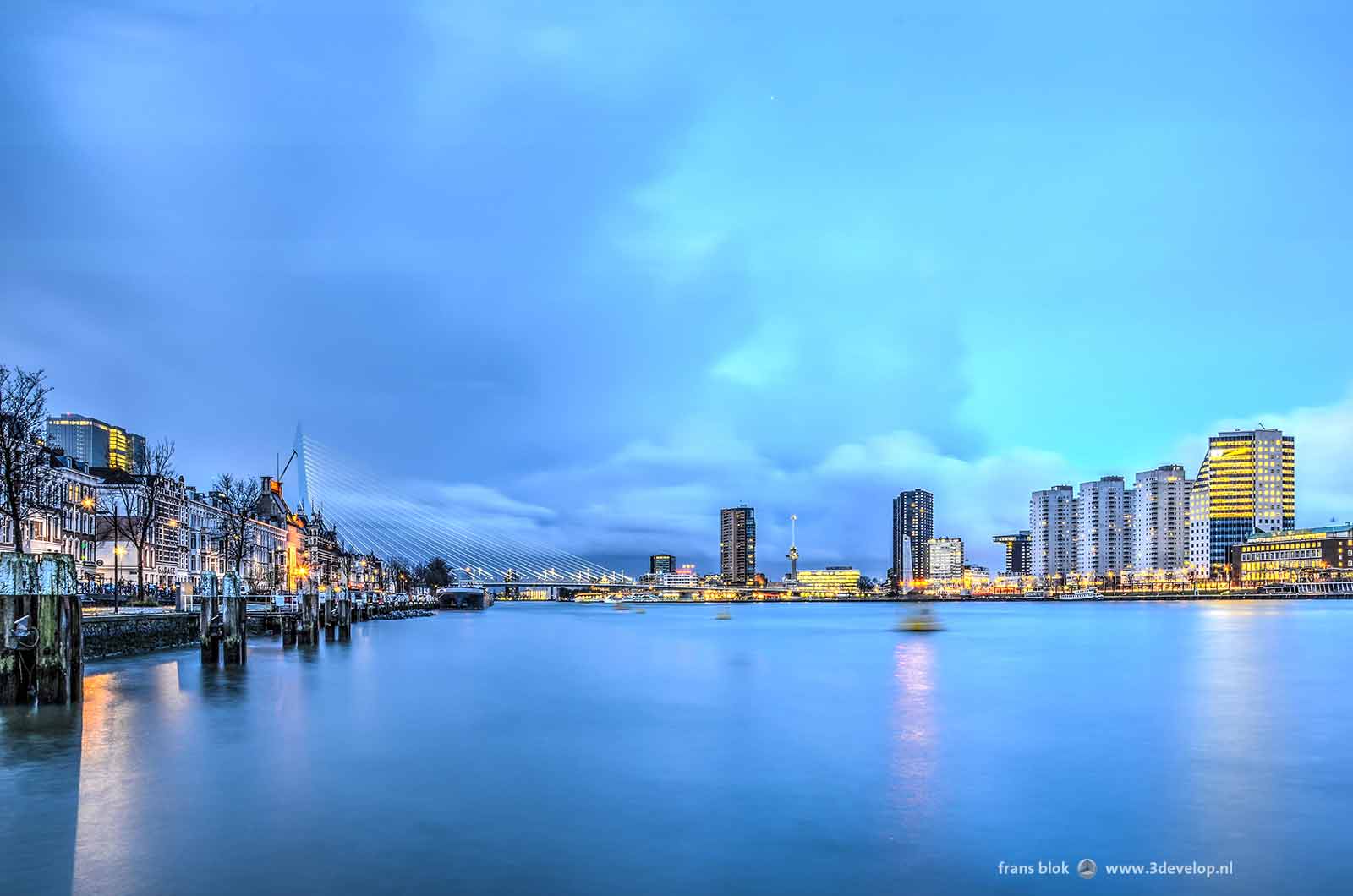 However, sleeping in was not an option. On New Year’s Eve the sunrise is at its latest: at 8:49 (In Rotterdam that is, elsewhere in the country it may be a few minutes earlier or later), but often already one hour before that, it starts getting interesting. And I do like some coffee and breakfast before I go into the city. So the alarm clock had to be set no later than seven AM. But that’s doable.

Also in these early photo-safaris I left my tripod at home, for reasons of speed and agility. There are enough surfaces to place your camera on, especially in the city. But as a small innovation, I brought a towel. Convenient to wipe those surfaces dry if necessary. But its also a useful tool to direct the camera slightly upwards if desirable.

Early in the morning there’s a different crowd than in later hours. People rushing to work, a few joggers and sometimes another sunrise hunter.

And some weirdos as well. There was one young guy who wanted to cosily join me on the bench that I was using as a tripod. He was very angry when I said told him I’d rather continue with what I was doing. But fortunately, after half a minute of strange behaviour and some severe swearing, he left me in peace. 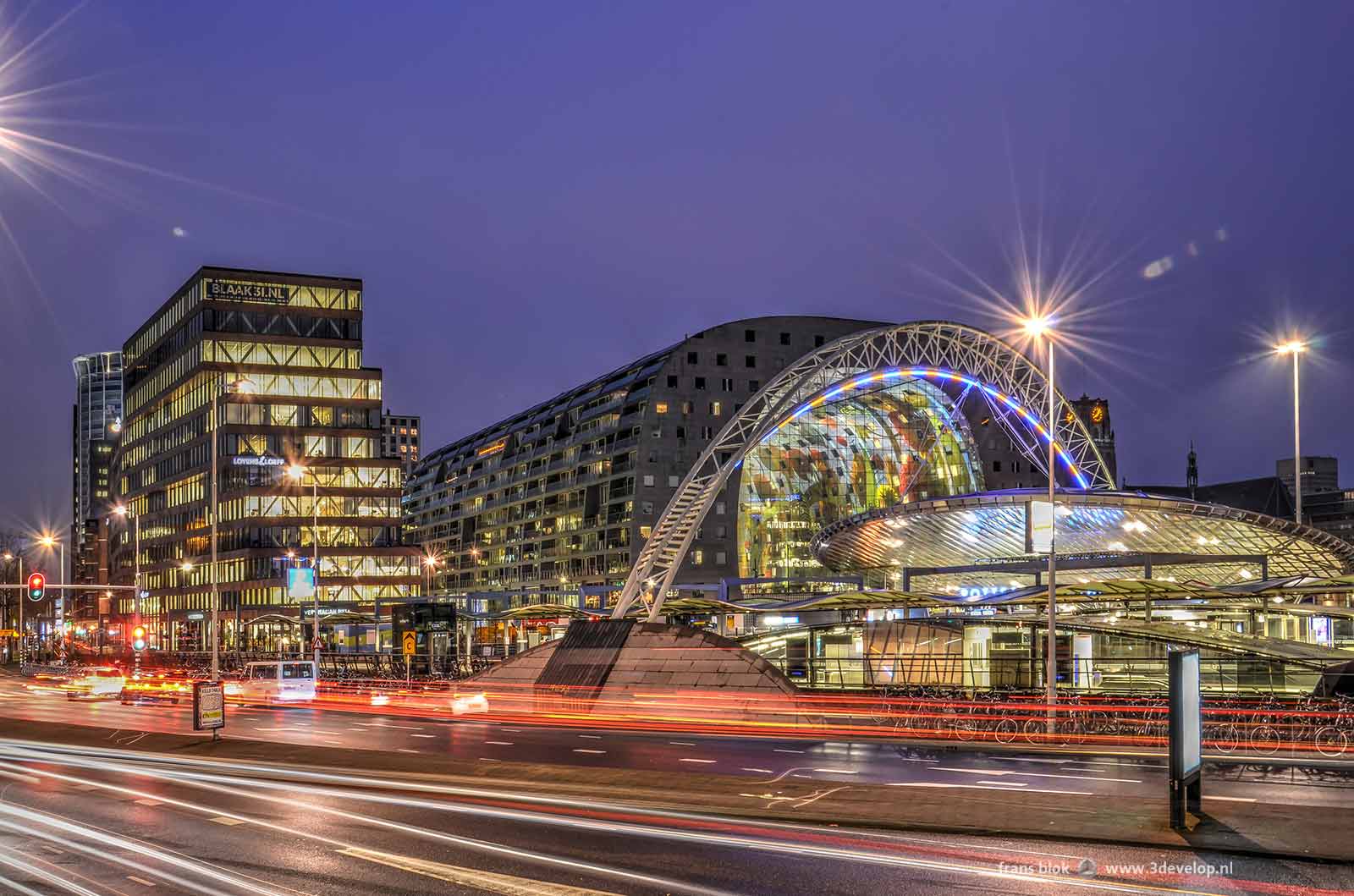 A more fundamental difference is of course the opposite order of events. In the morning you start rather than end with the blue hour, the light stripes, the long exposure times. I couldn’t explain more clearly what the term blue hour is based on than by showing this photo: 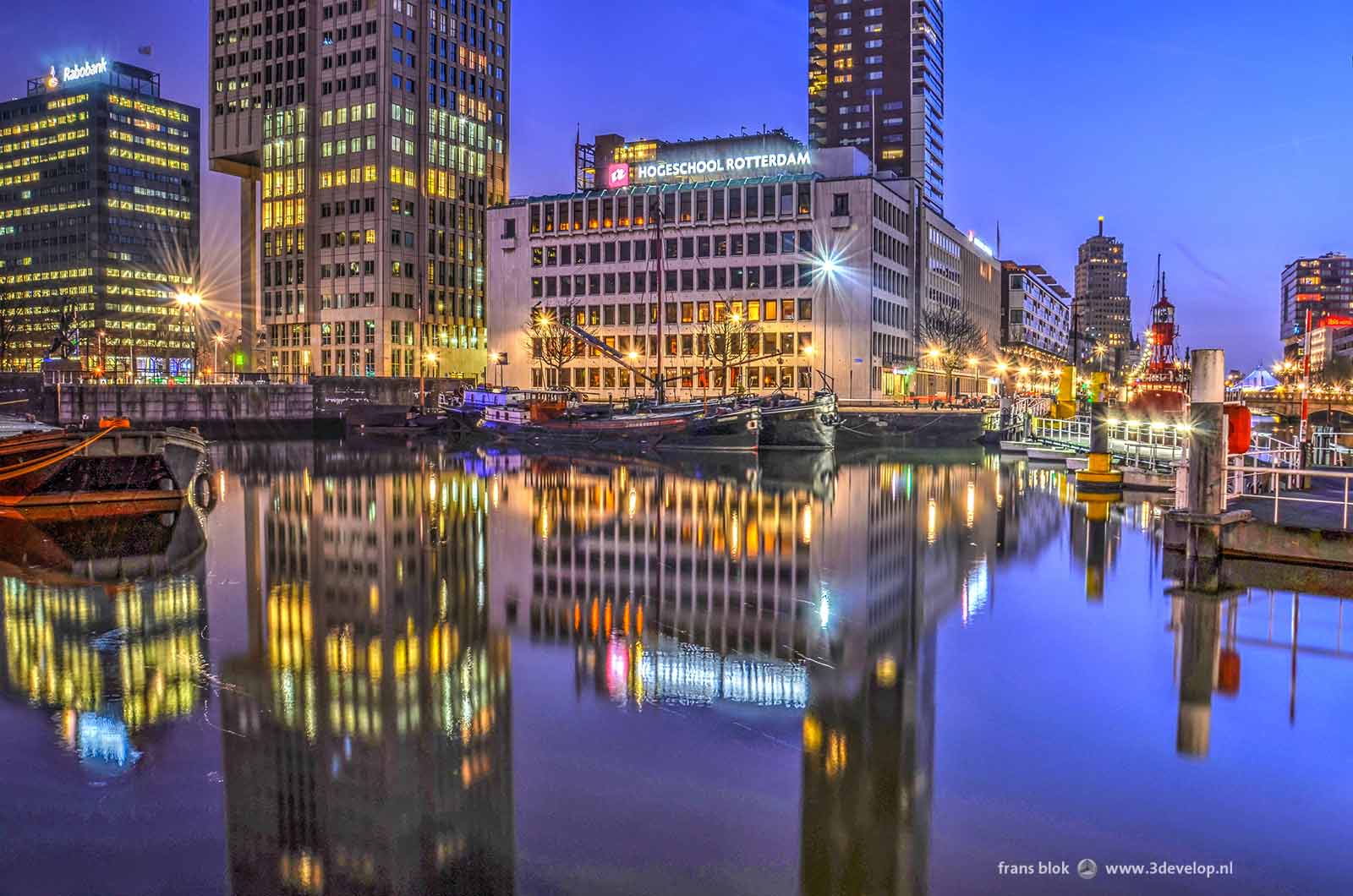 Another big difference between sunset and sunrise is the planning. For a beautiful sunrise you need a number of things. It should be partly cloudy, with clouds in both upper and lower atmosphere. And no clouds in the wrong places, where they block the sun’s rays.

You can often see a beautiful sunset coming in the course of the afternoon. But to catch a sunrise you have to asses about eight hours earlier whether it makes sense to set the alarm. And Dutch weather is rather unpredictable, even on such a short term.

I always look on the website of the Norwegian Meteorological Institute. Their predictions remarkably often are right, even for places far outside Norway. Well, Rotterdam is a lot closer to Oslo than Hammerfest, so that may be the explanation.

But even so it’s hard to tell. Also the Norwegians can not foresee exactly where the gaps in the clouds will be. In recent weeks, I have missed spectacular sunrises on days that completely overcast skies were predicted. And vice versa: some mornings looked promising but still were a bit disappointing because some thick clouds inland spoiled the fun.

The picture below I took on one of those somewhat disappointing mornings, shortly before a heavy downpour made it impossible to continue shooting. Nevertheless, because of the light on the towers in the background, along with the first raindrops on the top left, make it a pretty image: 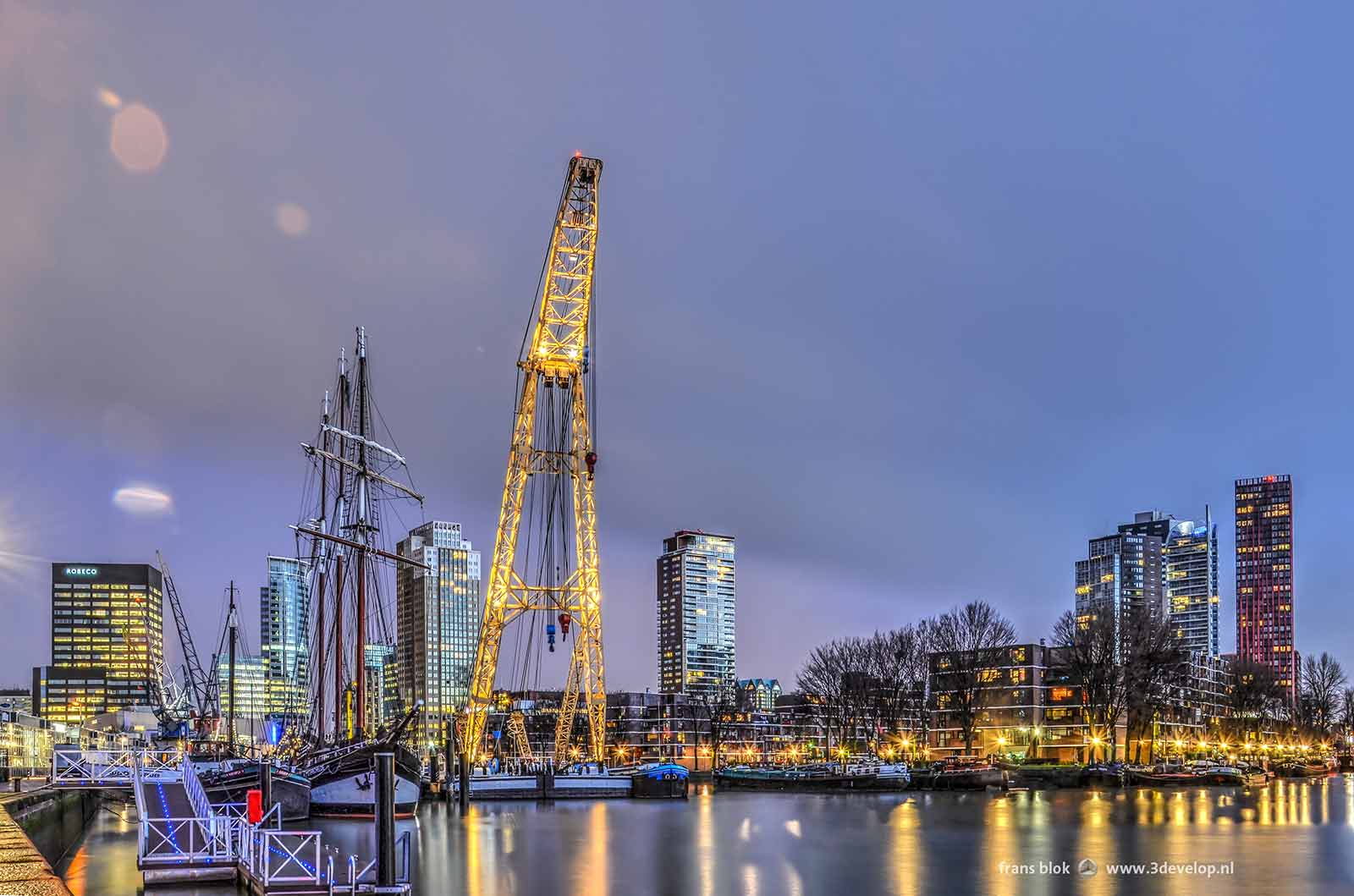 The other extreme, an almost cloudless sky, is not ideal either. It can make the sky a little boring. Yet even then the result is often quite beautiful: 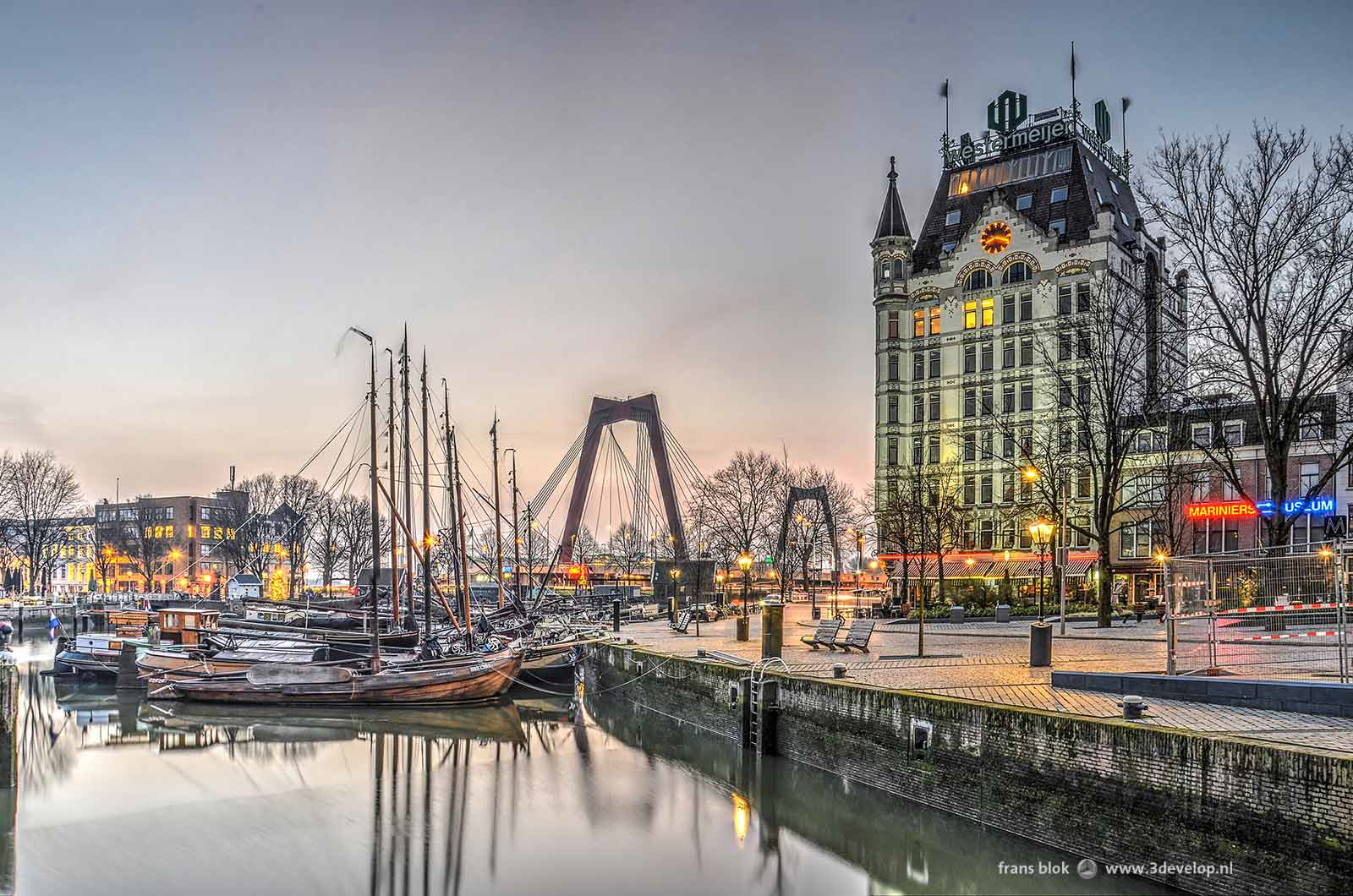 If all goes well, and there are clouds in the right places, the sky can turn a truly spectacular red. In that case, a water surface enhances the effect, and fortunately we have pretty many of those in Rotterdam. 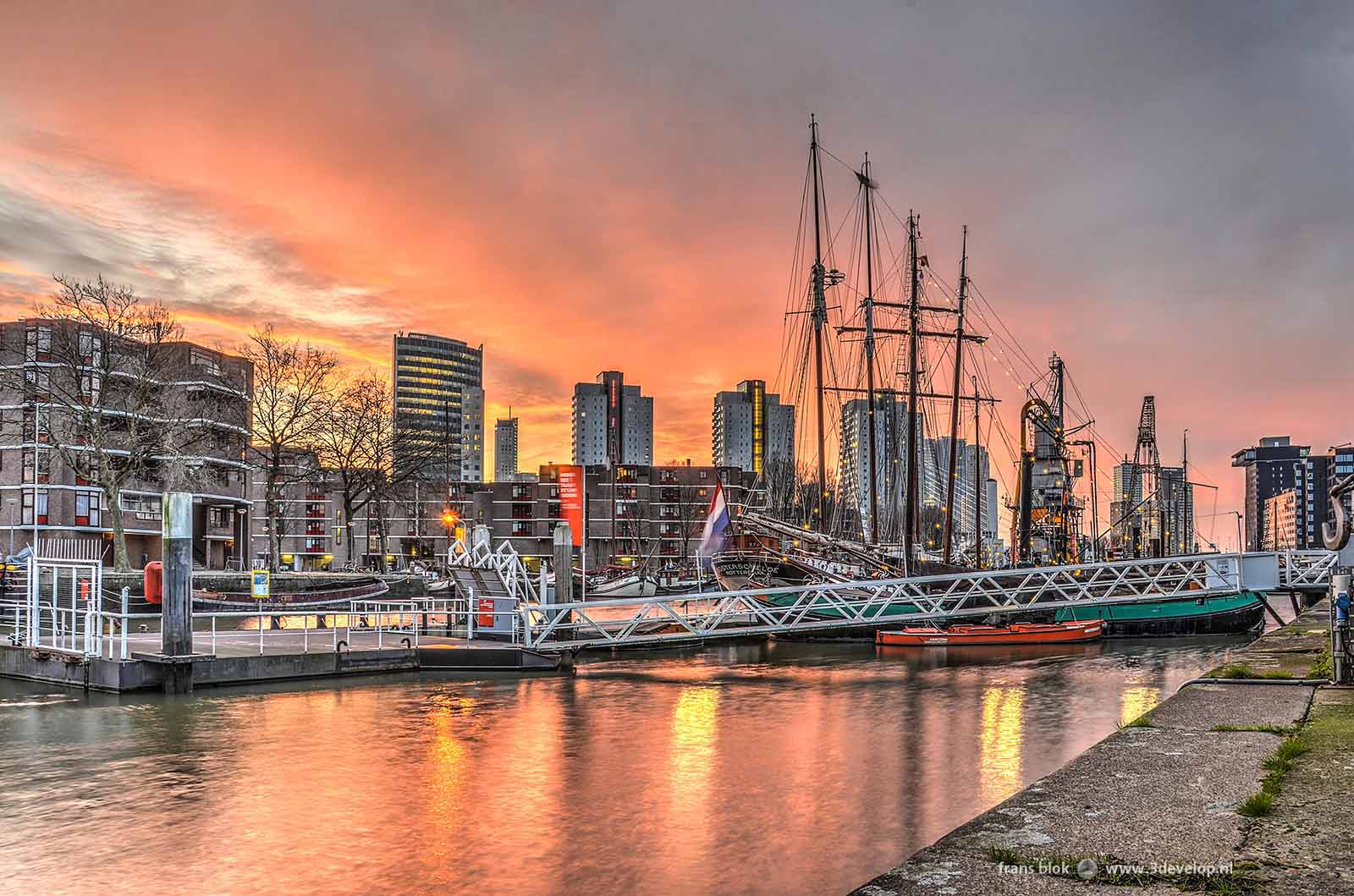 Often the colors blue and red both try to dominate the sky, nicely complemented by the mainly yellow tones of the artificial light: 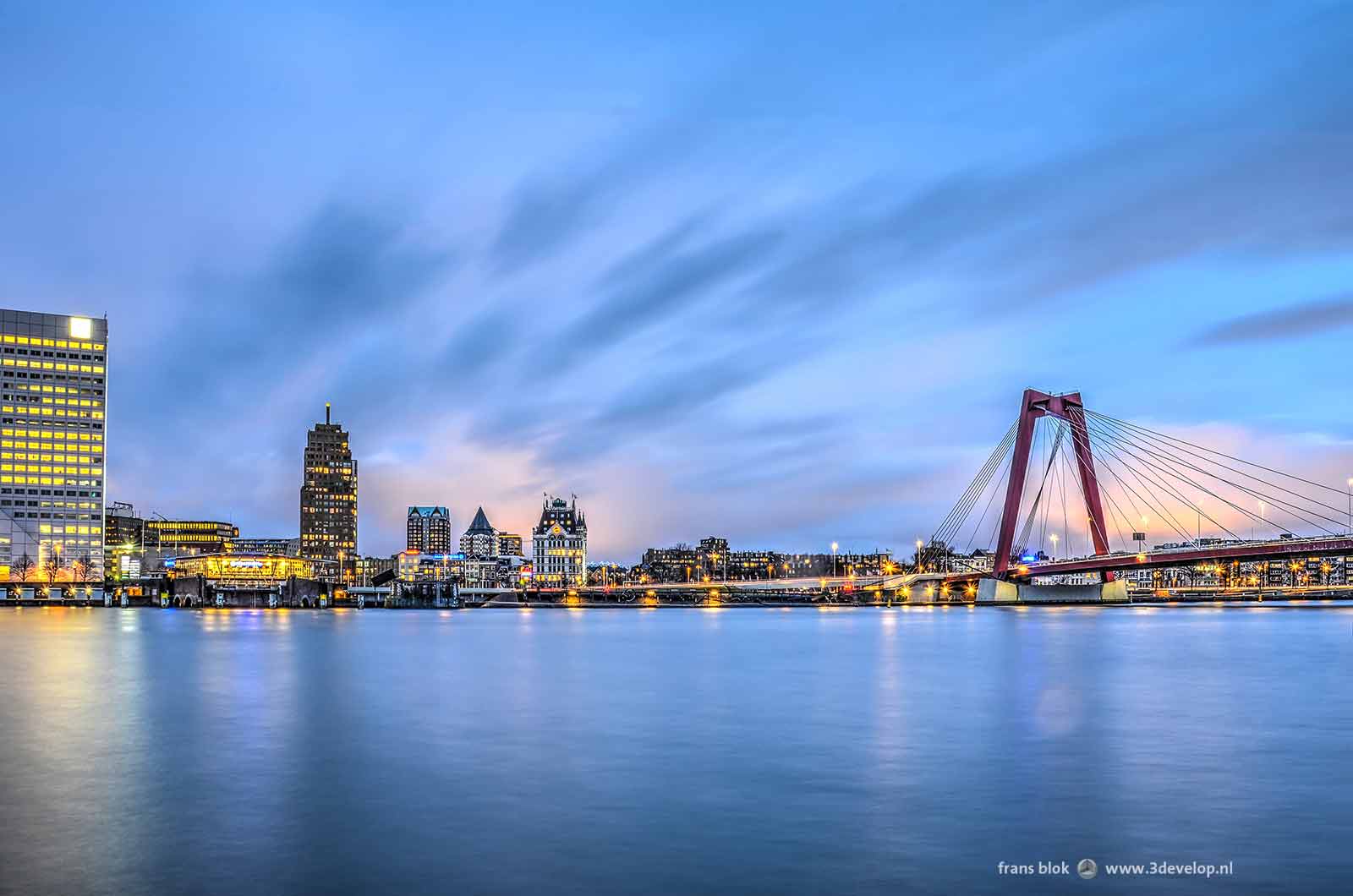 And sometimes you simply have to admit the sunrise is indeed mostly yellow: 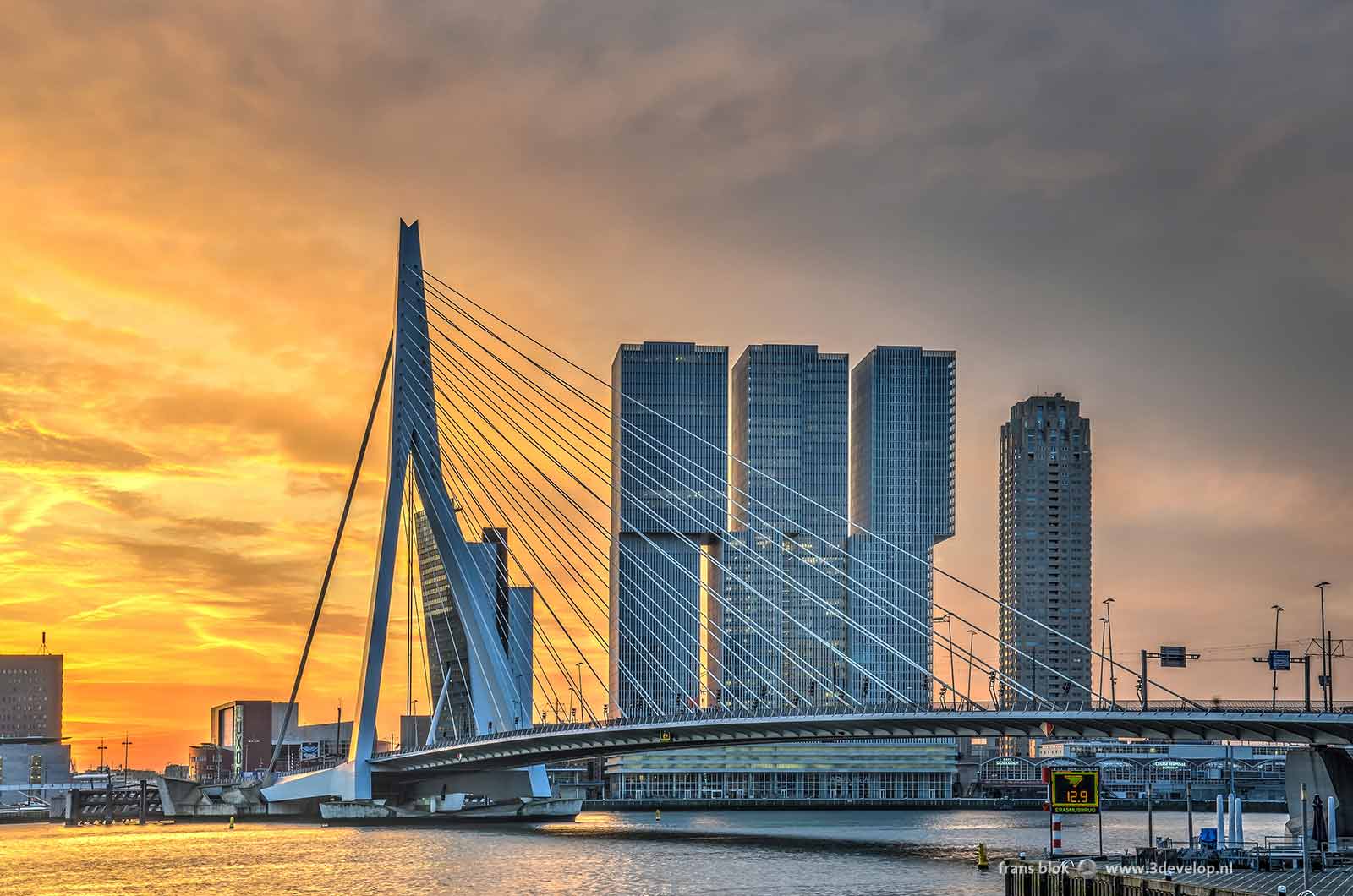 Sometimes the special effects continue untill about an hour after sunrise. But usually, when the streetlights turn off, that’s a sign it’s over. Time to go home for that second cup of coffee. 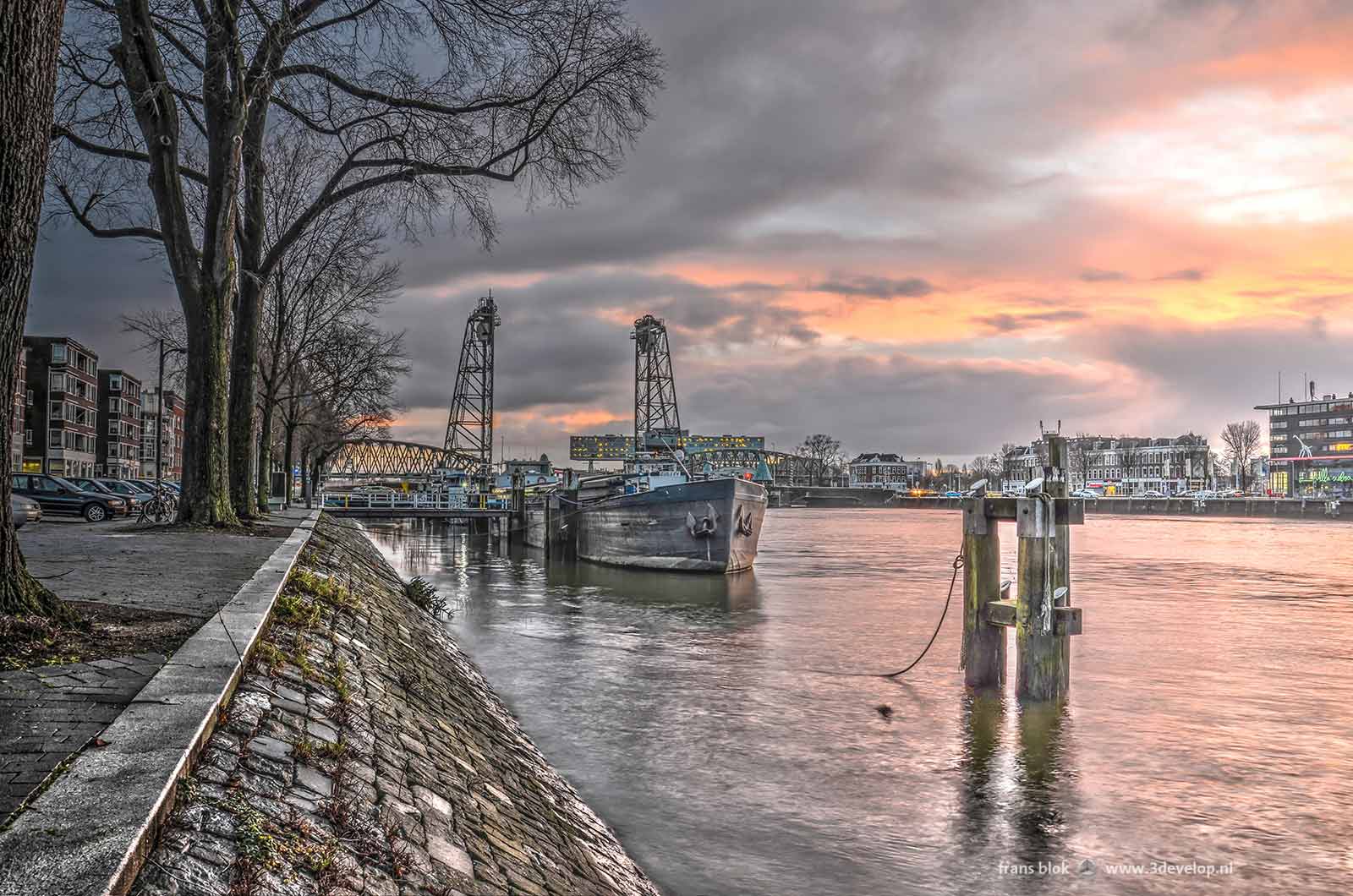 In the coming weeks the sunrise is slipping back out of range again, first with about one minute per day, later increasingly fast. With just a little jump back as daylight saving time begins. But even then, on March 27, the sun already rises around 7:27. That means setting the alarm at six o’clock and I’ve done that before, but I’m afraid that I have to rely primarily on the dark mornings around New Year’s Eve.

Meanwhile, a few pictures from my morning safaris already found their way into the new hall in my web gallery: The Edges of the Night.