Liquid water has just been found on Mars. The movie The Martian (the perfect blend of Castaway and Apollo 13, with a touch of Saturday Night Fever) is in cinemas right now. And NASA has announced detailed plans to send people to Mars in twenty years. A good moment for me to take a look at the planet again as well.

Mars and I have a long history together. In 1999 I founded, together with Arno Wielders (currently involved in Mars One) the Dutch chapter of the Mars Society in a café in Leiden. In the first years of this century we organized two European conventions, a symposium in the auditorium of Delft University of Technology and a National Marsday featuring astronaut Andre Kuipers.

And we had a stand on the Southern Dutch Fair in Eindhoven, with an inflatable planetarium: 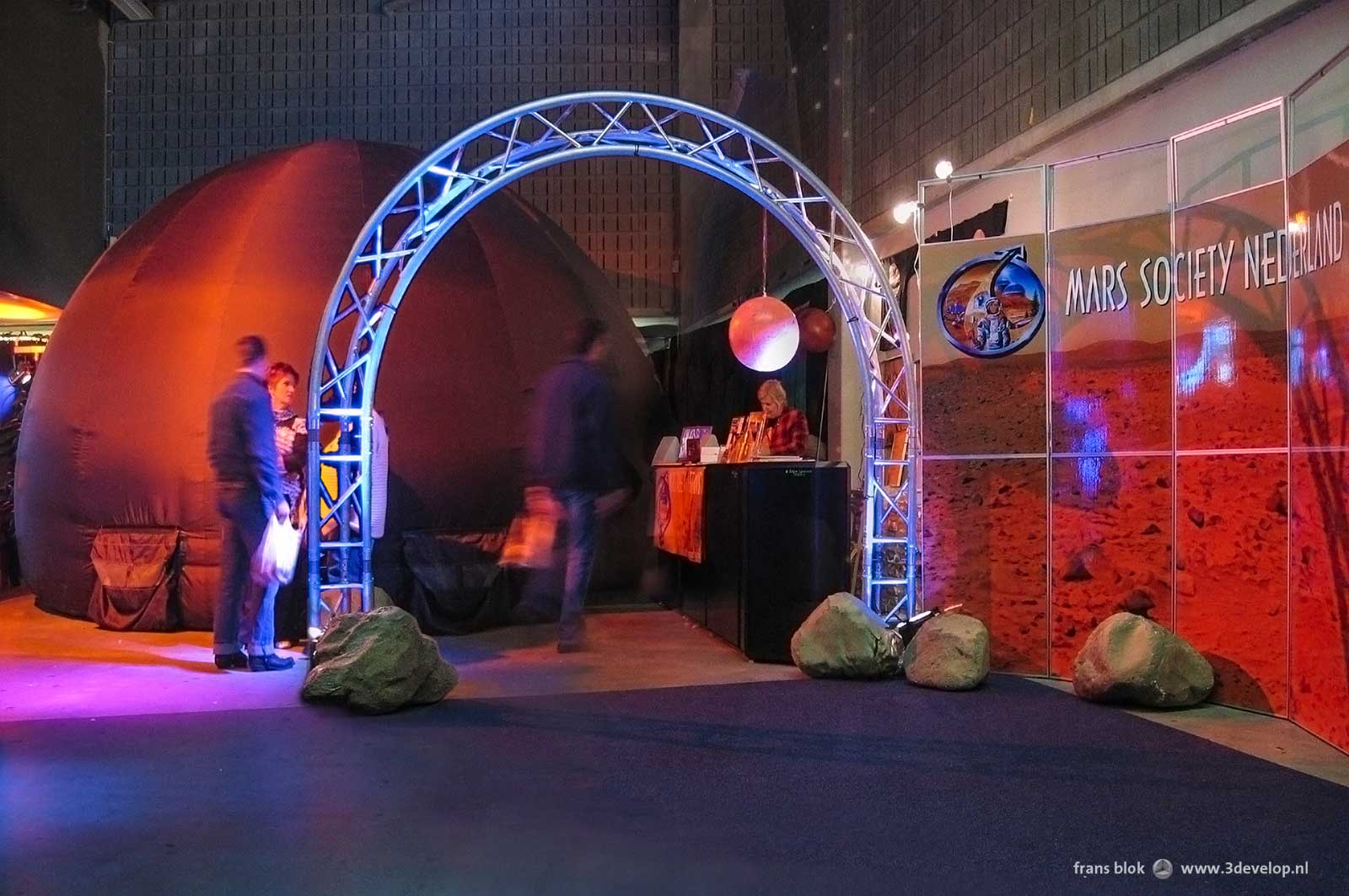 Our press officer and later president Artemis Westenberg (now president of Explore Mars) appeared frequently in Dutch media to tell our story: a manned mission to Mars is possible as well as important.

That message encountered a lot of skepticism, often of the type: we must first solve all our problems on Earth before we should go into the space. Our reply that part of the solutions can be found outside the Earth, did not ring a bell for everyone. As a result we were often denounced as otherworldly dreamers.

Remarkably, the mood has since then improved considerably. A manned Mars mission is increasingly regarded a real possibility, both in cinemas and elsewhere. And I haven’t heard the “we must first …”-argumentation for a while. I like to tell myself that our work with the Mars Society Netherlands played a role in that change. But it could also be the Zeitgeist.

I managed to largely confine my own contributions to the cause to the things I am good at: writing, designing and visualisation. As an example I was involved in the design of Euro-MARS, the European Mars Analogue Research Station, to be build in Iceland: 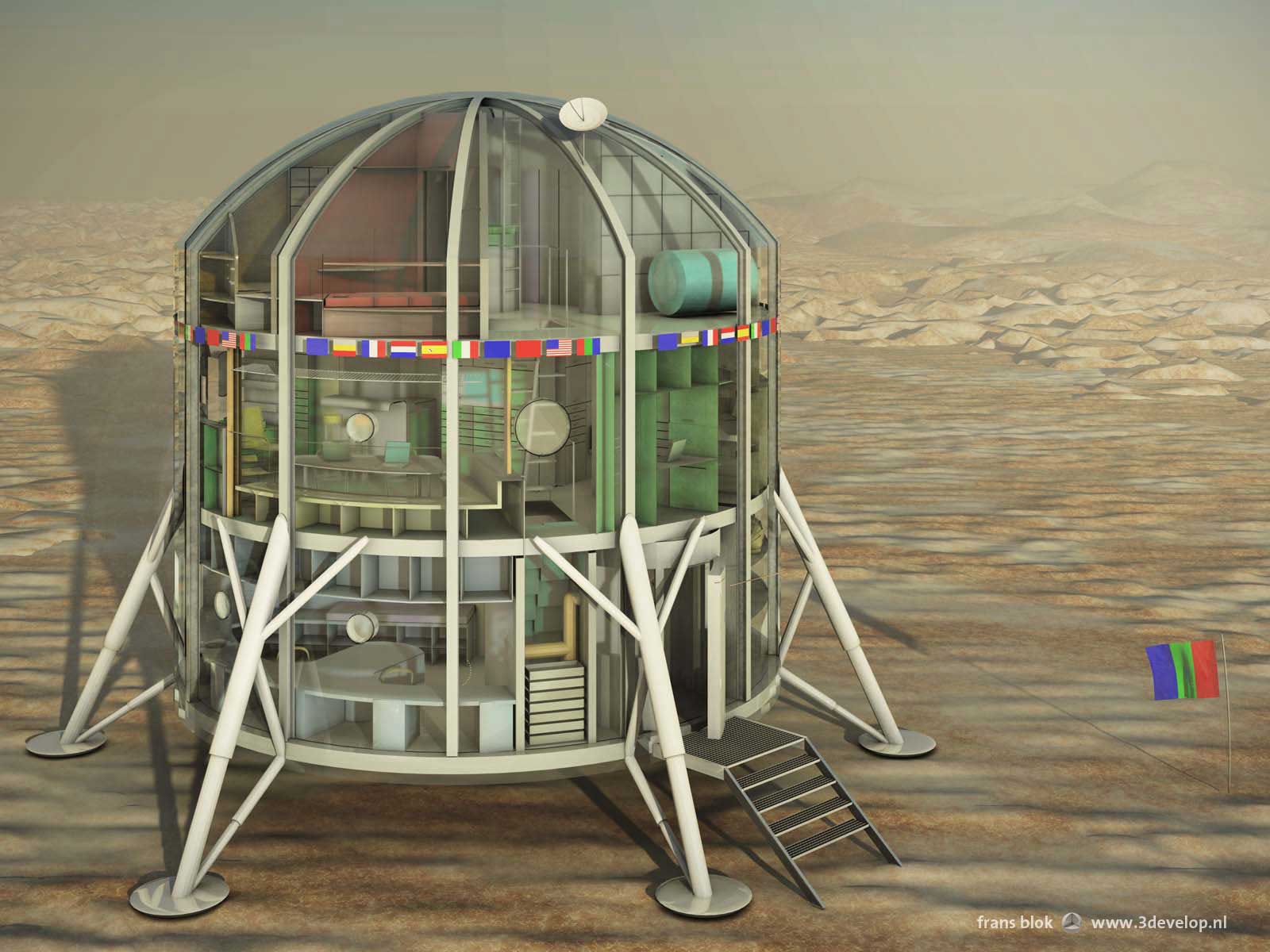 I also like to look a little bit further than the first manned mission. A lot further, in fact. Wouldn’t it be nice if we could customize Mars, make it a little friendlier? Slightly warmer, a denser atmosphere, some seas, rivers and forests?

Terraforming, this concept is called in science fiction. Kim Stanley Robinson, for instance, wrote his famous trilogy Red, Green and Blue Mars about the subject. But since most scientists agree that we are raising the temperature on Earth with our CO2 emissions, terraforming is suddenly no longer science fiction, but science fact.

That does not mean that the transformation of Mars will be a piece of cake. Better wait a while before booking that holiday in Valles Marineris National Park . The estimates about the duration of terraforming Mars range from a few hundred to a few million years. Arnold Schwarzenegger in Total Recall did it in a few seconds, but that seems overly optimistic.

But even though we probably won’t live to see it, it’s an interesting thought experiment to study what a terraformed Mars would look like. Where do we get oceans and lakes, where do we want make it green and where do we prefer to keep it red? A design project on a planetary scale.

The topography of Mars has been extensively mapped by the American satellite Mars Global Surveyor in the late nineties. So it is a breeze to choose a beautiful coastline. Although it remains a guess how much water there actually is on the planet and how much can possibly be imported.

With some high school geography knowledge (Hadley cells and Buys Ballot’s Law) one can imagine what wind patterns may appear in the atmosphere and to which climate and vegetation zones they would lead. It remains somewhat speculative but all in all the world map below represents a reasonably well-founded prognosis: 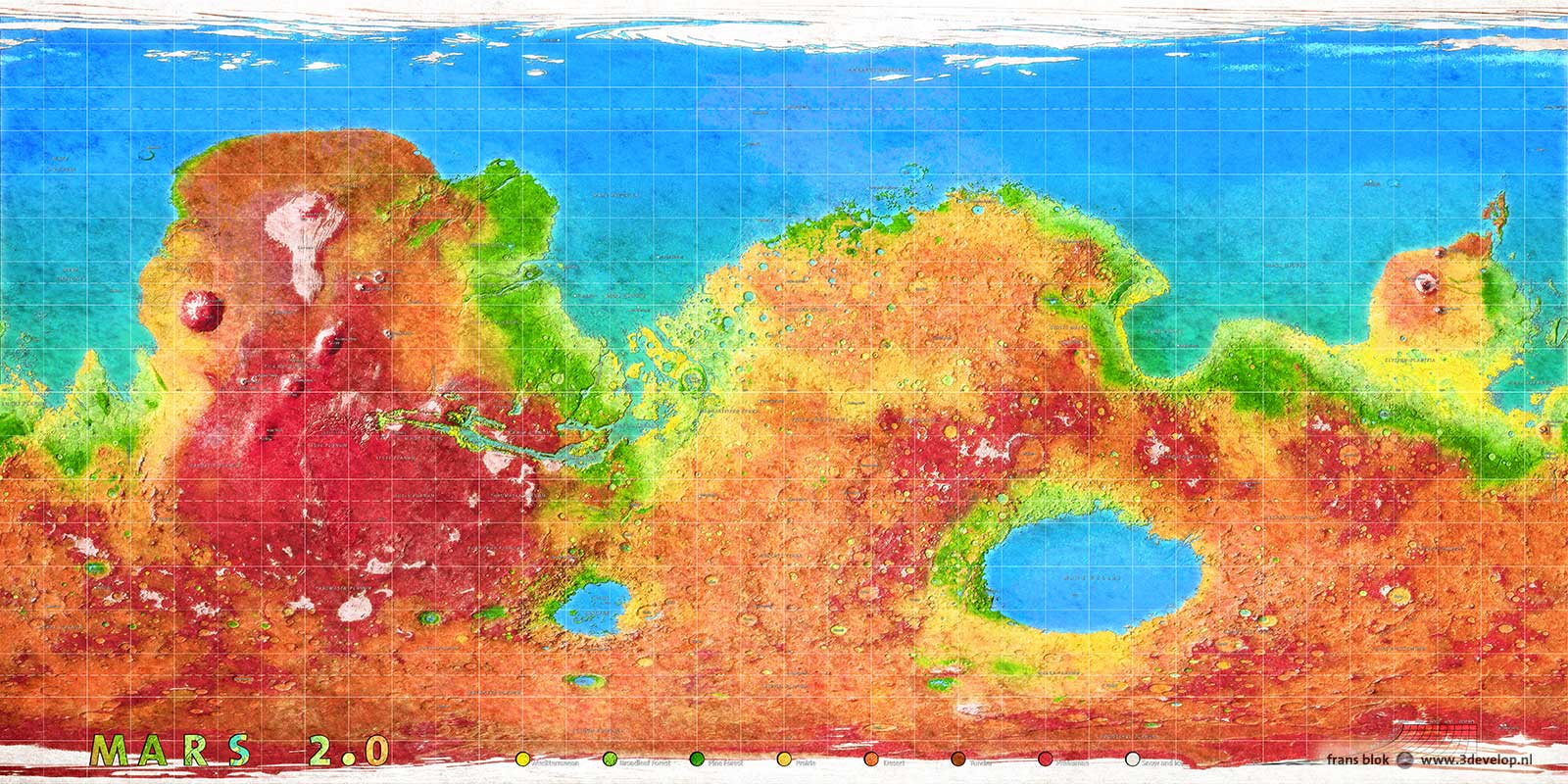 I made this Mars 2.0 map especially for my webshop at Ohmyprints, as a completely revised edition of the interactive map I created earlier for Modified Mars. For that latter map I also invented a history, a political structure and a network of cities, towns and villages, but I omitted that this time. I leave the creation of a Mars 3.0 to the beholder.

Therefore the names on the map of the various plains, craters, mountains and valleys are based on the nomenclature of the International Astronomical Union. I only renamed areas under sea level in a way that does justice to this new situation. Utopia Planitia, for example, becomes Mare Utopia.

The fragment below shows the perhaps most interesting part of the planet. This is the area where the waters of Oceanus Borealis, through the “grand canyon” of Valles Marineris, cut deep into the highlands of Tharsis. All climates are represented here at only a short distance: from the tropical beaches of the Vallis to the cold and pristine highlands of Ophir, Solir, Sinai and Thaumasia: 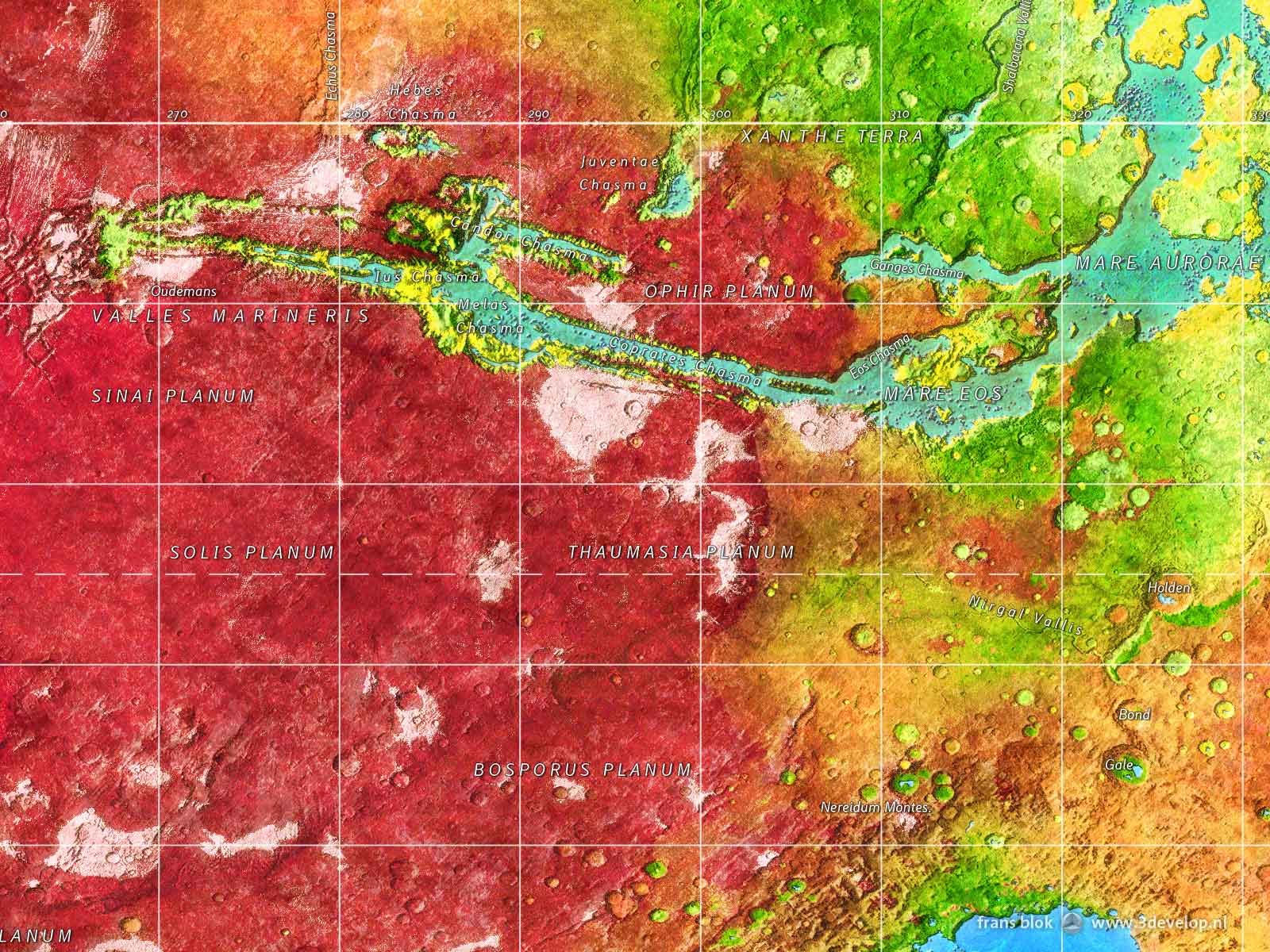 The map also shows the main US, Russian and British landing sites. Well, sadly, “landing” might not really be the right word in the case of Beagle 2. Also indicated is the fictional landing site from the book and film The Martian in Acidalia Planitia, which has disappeared under the waters of Mare Acidalia.

Below is an section of the map showing how far poor Mark Whatney had to travel to get to safety. On the top left at the asterisk is the site of Ares 3; right below is Sciaparelli crater, landing site of Ares 4, 3200 kilometers away. 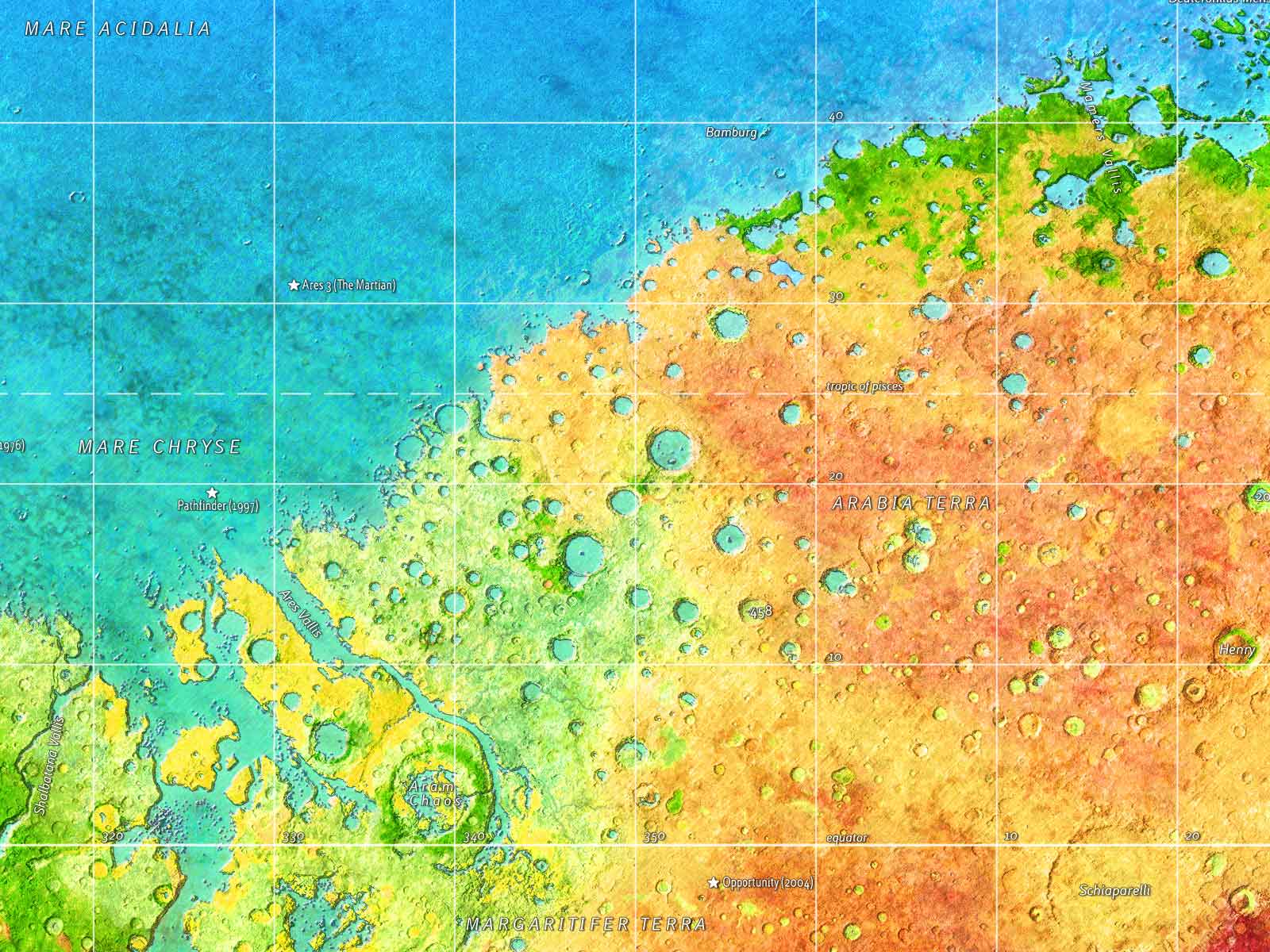 Well, let’s first wait and see that manned mission happen. Until then Mars 2.0 looks great on any wall: 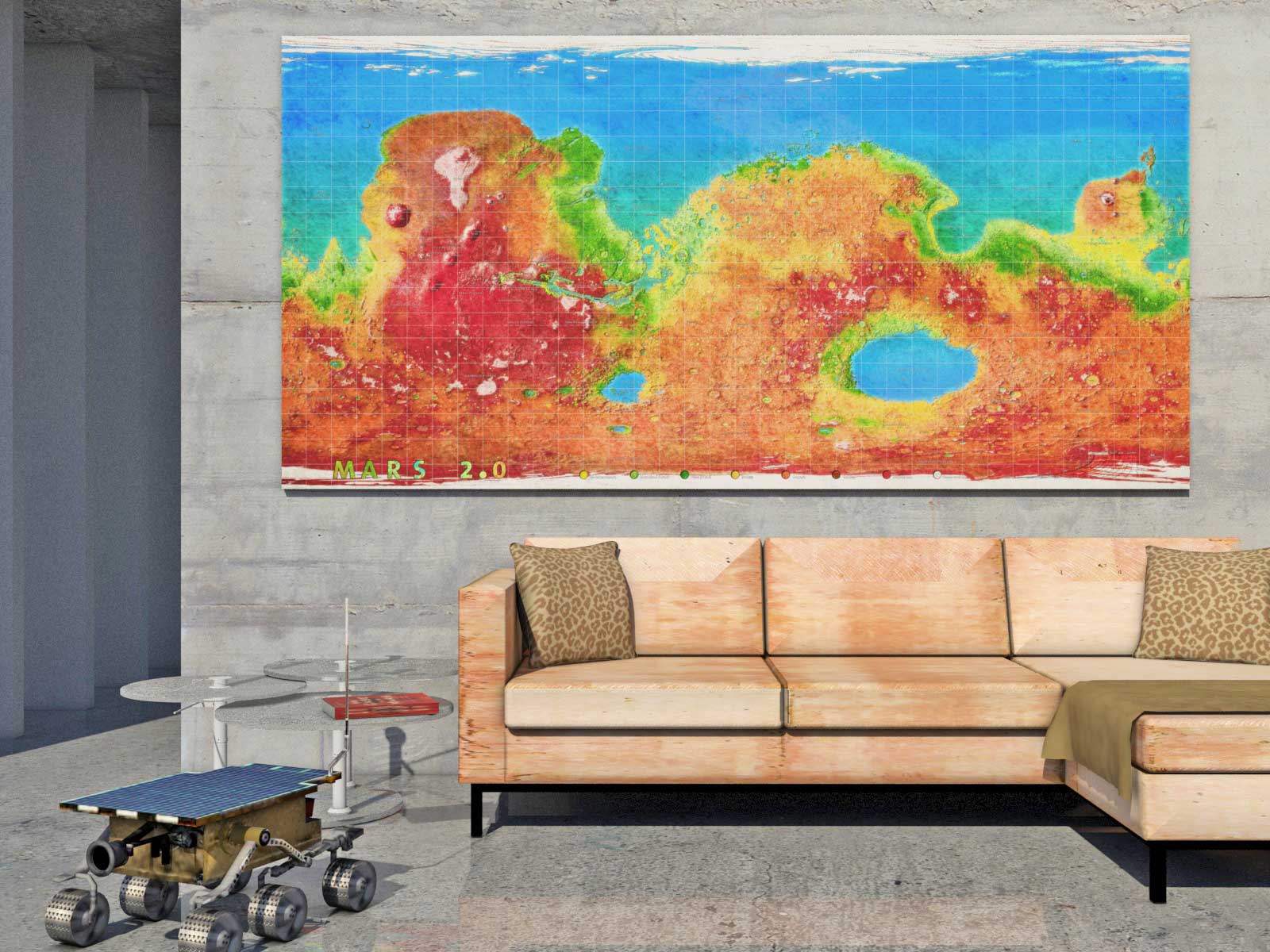