Every city has a collection of statues and other works of art in public spaces. But I do feel that the average artwork in Rotterdam is somewhat larger than elsewhere. The city has a remarkable number of sculptures that are so large that you can walk through them. The reason may be that, in the spaciously designed post-war inner city, there is simply more room to go big.

I wondered what were my favourite public sculptures in Rotterdam and I came to this list of ten. Let me start with a disclaimer: I don’t know much about art at all. And tomorrow I may think very differently about the selection and the order. But today this is my top 10. 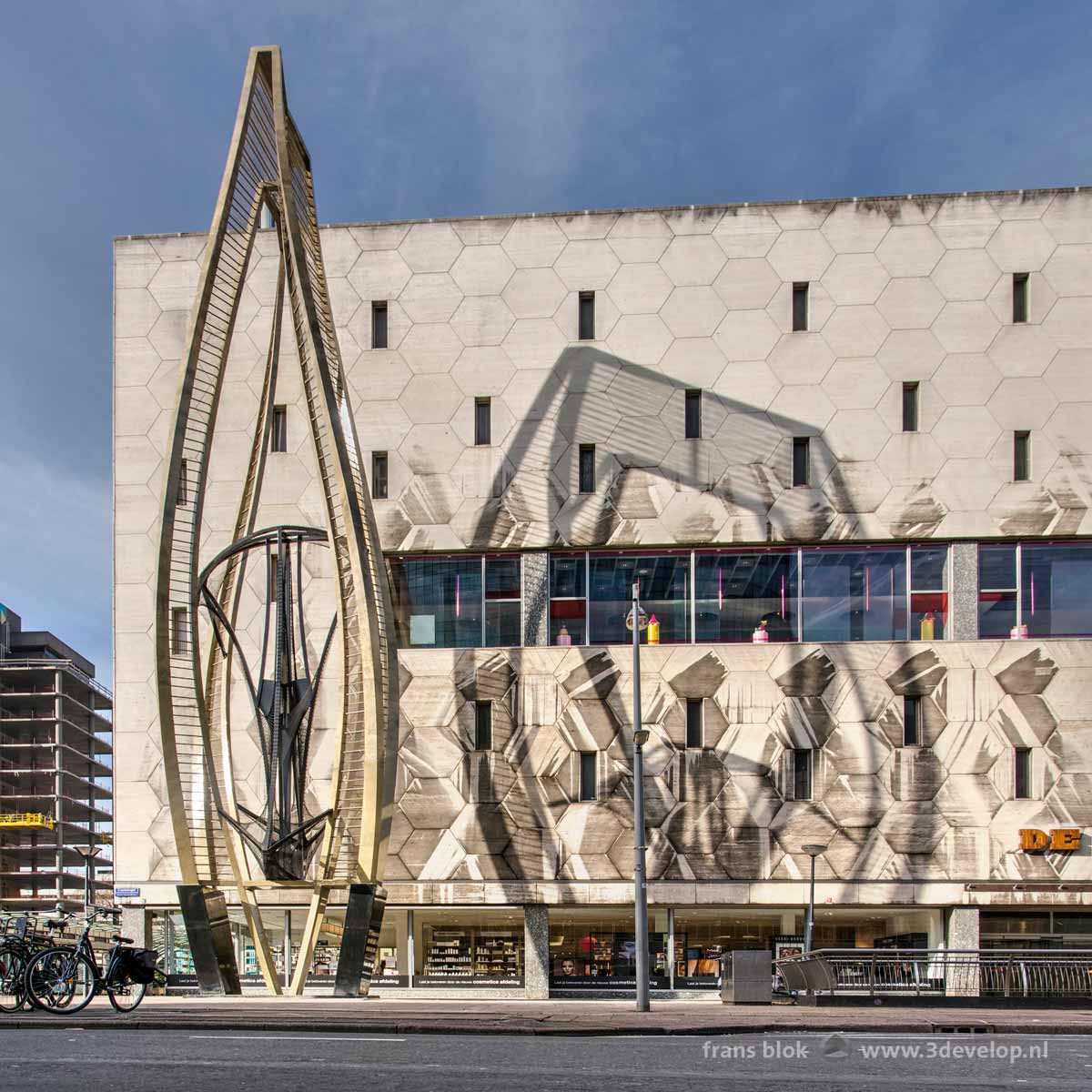 According to the urban plan, the Bijenkorf building should have had an extension protruding in the direction of Coolsingel, like it was done at nearby Aert van Nesstraat and Stadhuisplein. Marcel Breuer, the architect of the department store, however, had a simple square building in his head so he asked the Russian artist Naum Gabo to make a large sculpture for that spot. And the city’s supervisiors agreed with that.

Gabo didn’t give his sculpture a title. That’s always a bit of a weakness; you can wait for the people to come up with a nickname. In this case: the Thing.

The disadvantage of a 26 meter high work of art is that the maintenance is not cheap. After more than half a century a major refurbishment was necessary, but who was going to pay for it? Fortunately, the funding issue was solved in the end and The Thing was thoroughly restored in the winter of 2017/2018. It’s looking great again, in anticipation of the much needed refurbishment of the Coolsingel itself, which will take place in the coming years. 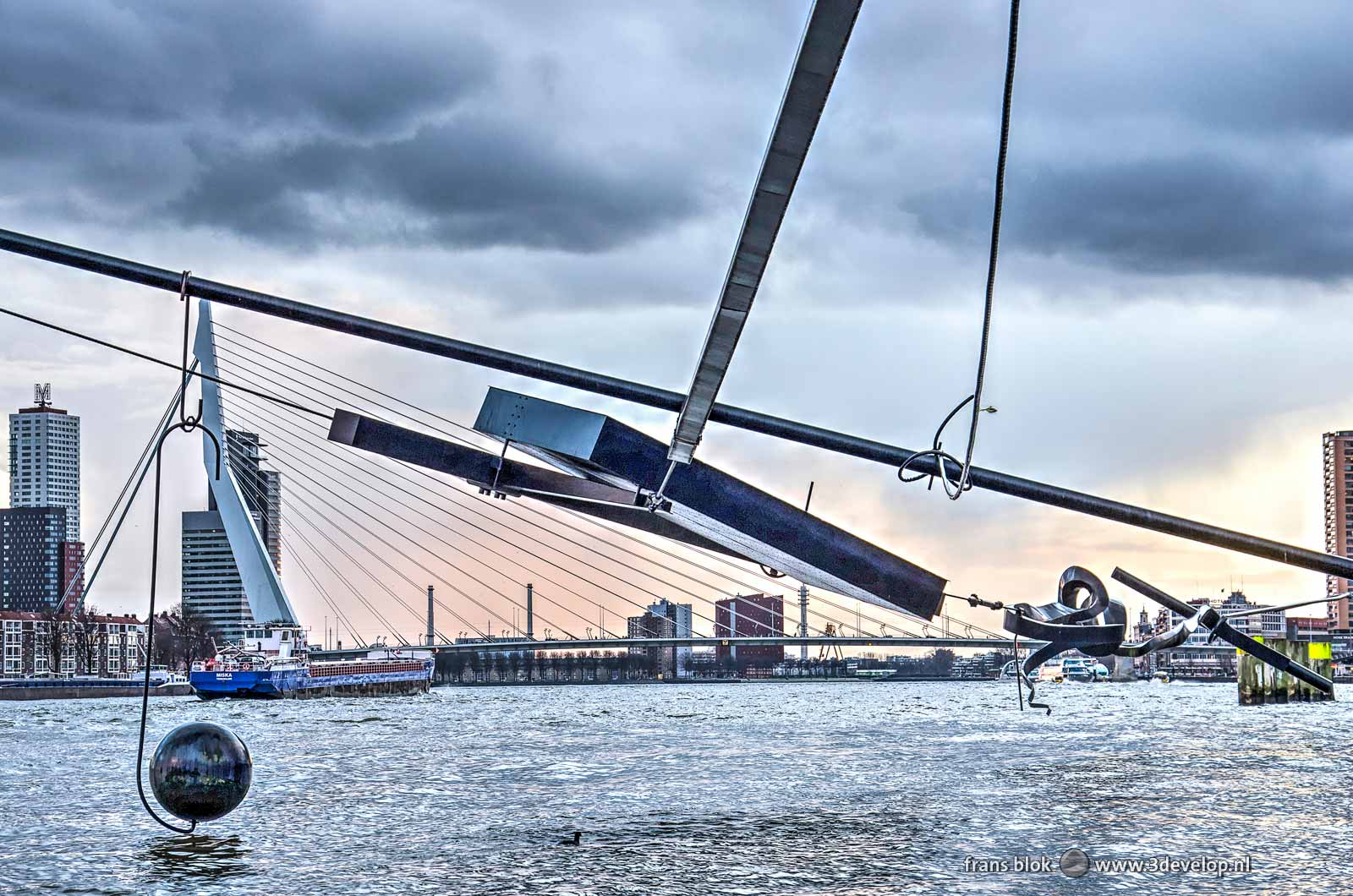 The official name for this artwork is Maasbeeld, named after the river it is hovering above, but in practice everyone uses the nickname De Waslijn, or The Clothesline. I assume that it is one of the very few sculptures on our planet that is suspended, rather than standing on a pedestal. This line with apparently random forms connects the new Willemsbridge, opened in 1981, with the abutment of the old bridge.

I can vaguely remember a guest lecture by Auke de Vries during my years as an Architecture student at Delft University of Technology, when he explained that scribbles that make people out of boredom during dull meetings are an important source of inspiration for him. 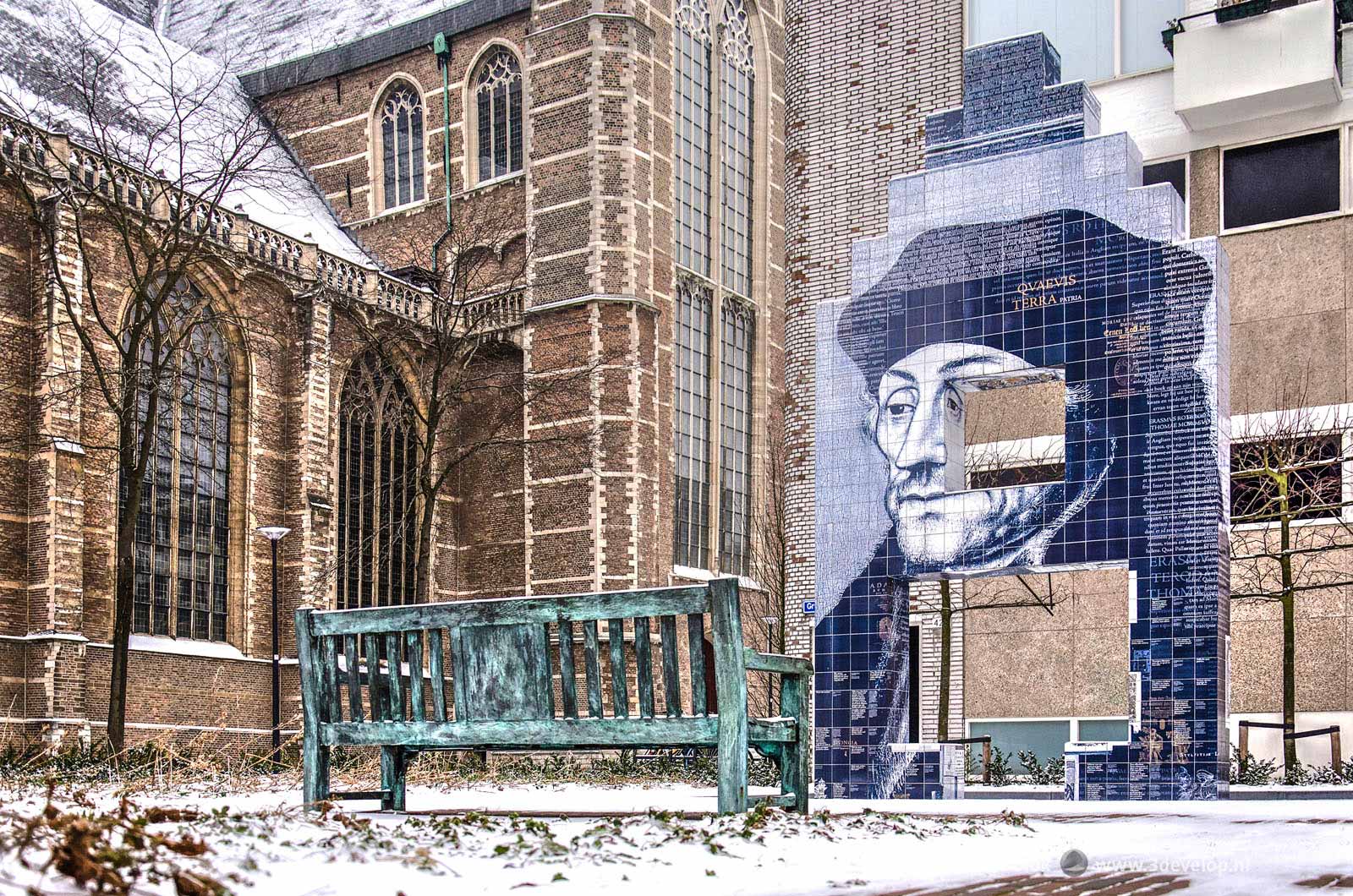 Although he lived here only as a toddler, Rotterdam is very proud of Erasmus. Among other things, a bridge, a university, a street, a pharmacy and a hotel are named after him. And rightly so: someone who already in the fifteenth century said things like: “The whole world is my homeland” and “Let everyone honor their own conviction without insulting someone else’s”, that’s certainly not a guy to be ashamed of.

Desiderius Erasmus was born in 1466 in a small house on an alley between Hoogstraat and Laurenskerk. The building has been there for centuries, but was finally demolished in the late nineteenth century. Because the whole area was destroyed during the bombing in 1940, it was difficult to say where exactly the house had been. But since 2016 the place has been marked with a cartoonish building covered with Delft blue tiles with the portrait and texts of the big man.

Desiderius himself, a few dozen meters away on his pedestal in the park in front of the church, looks content. Incidentally, that is the oldest bronze statue in the Netherlands; good to have it within the city limits as well. 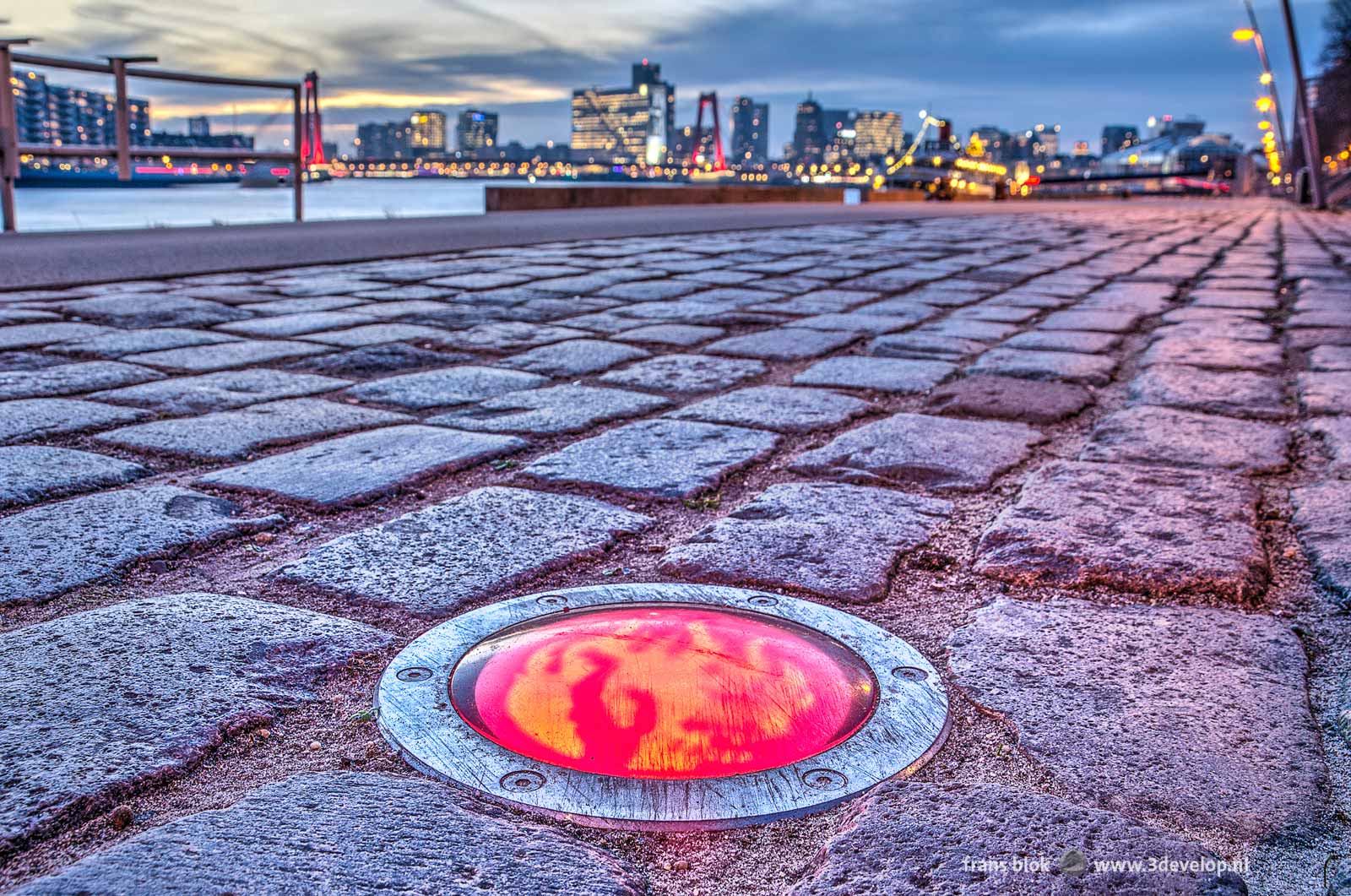 This is by far the largest piece of art on this list. And maybe it’s even the largest artwork in the world. The Brandgrens, or Fire Limit, surrounds the area that was destroyed during the bombing on 14 May 1940 and the sunsequent fire. That disaster zone had an area of ​​many square kilometers; the total length of the Fire Limit is twelve kilometers.

In 2007 and 2008 the line was made visible on 14 May with a large number of spotlights. That was an impressive event and should, in my opinion, be repeated once every five years or so. The lights that mark the Fire Limit since 2010 are more subtle. They are a great guiding line for a city walk. In some places the transition between old and new is immediately recognizable; in other places, the border has completely faded due to post-war demolition. But it is in any case a surprising way to look at the city with different eyes.

Incidentally, ignorant tourists sometimes think the lights are the work of the devil. But well, it was pretty devilish, that bombardment. 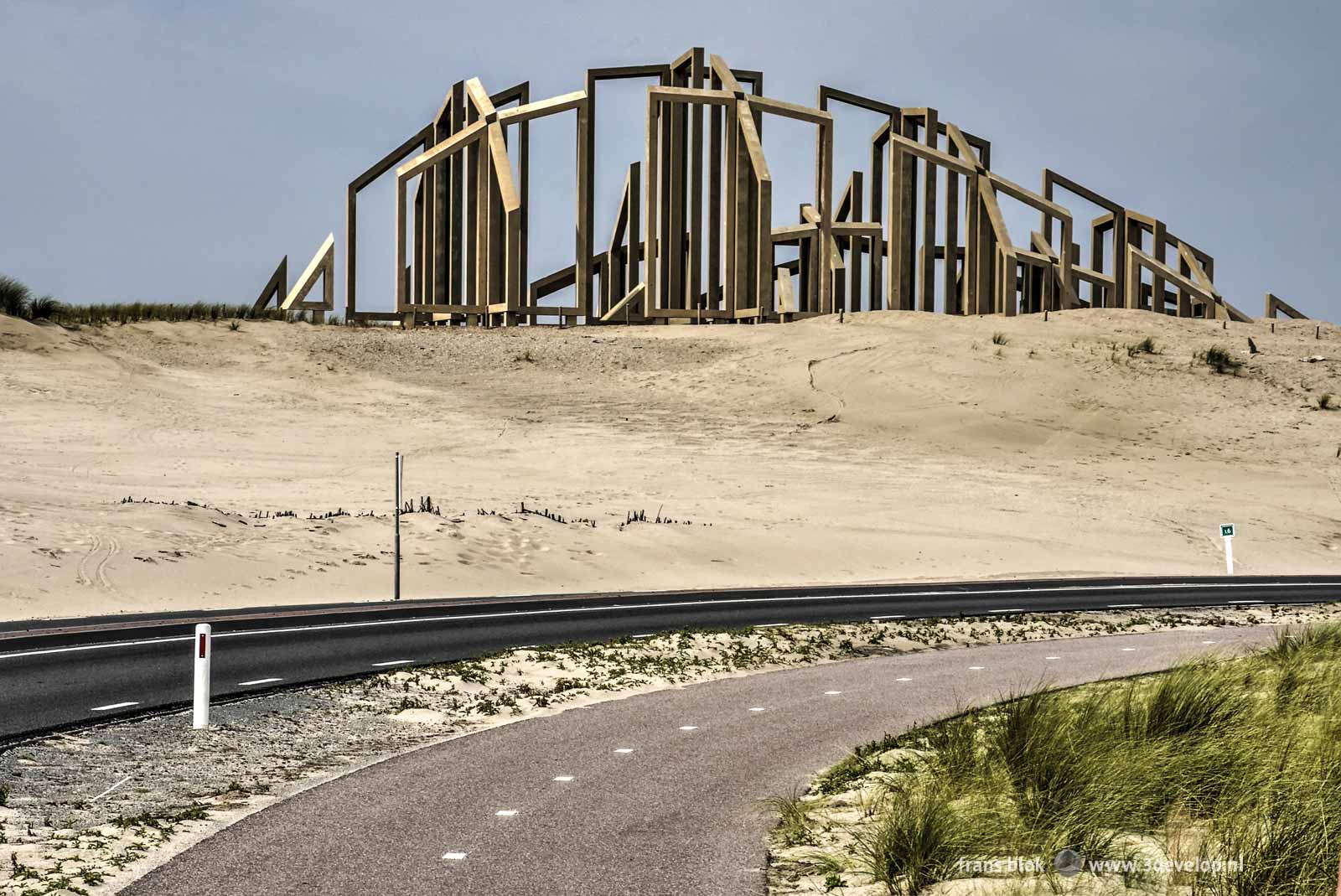 Most of the artworks in this top-10 are located in downtown Rotterdam, or within walking distance from there. De Zandwacht, or Sand Guard, however is located about 34 kilometers away, at the foot of a spectacular hairpin bend on Second Maasvlakte, the recently reclaimed industrial zone in the Northsea. But officially that area is part of the municipality of Rotterdam.

The concrete artwork represents the formation of dunes by the wind. And this sculpture is pretty big too: 40 by 20 meters and 12 meters high. You can not just walk through it; you can almost get lost in it. But in the vastness of the Maasvlakte and the North Sea, those dimensions are certainly justified. 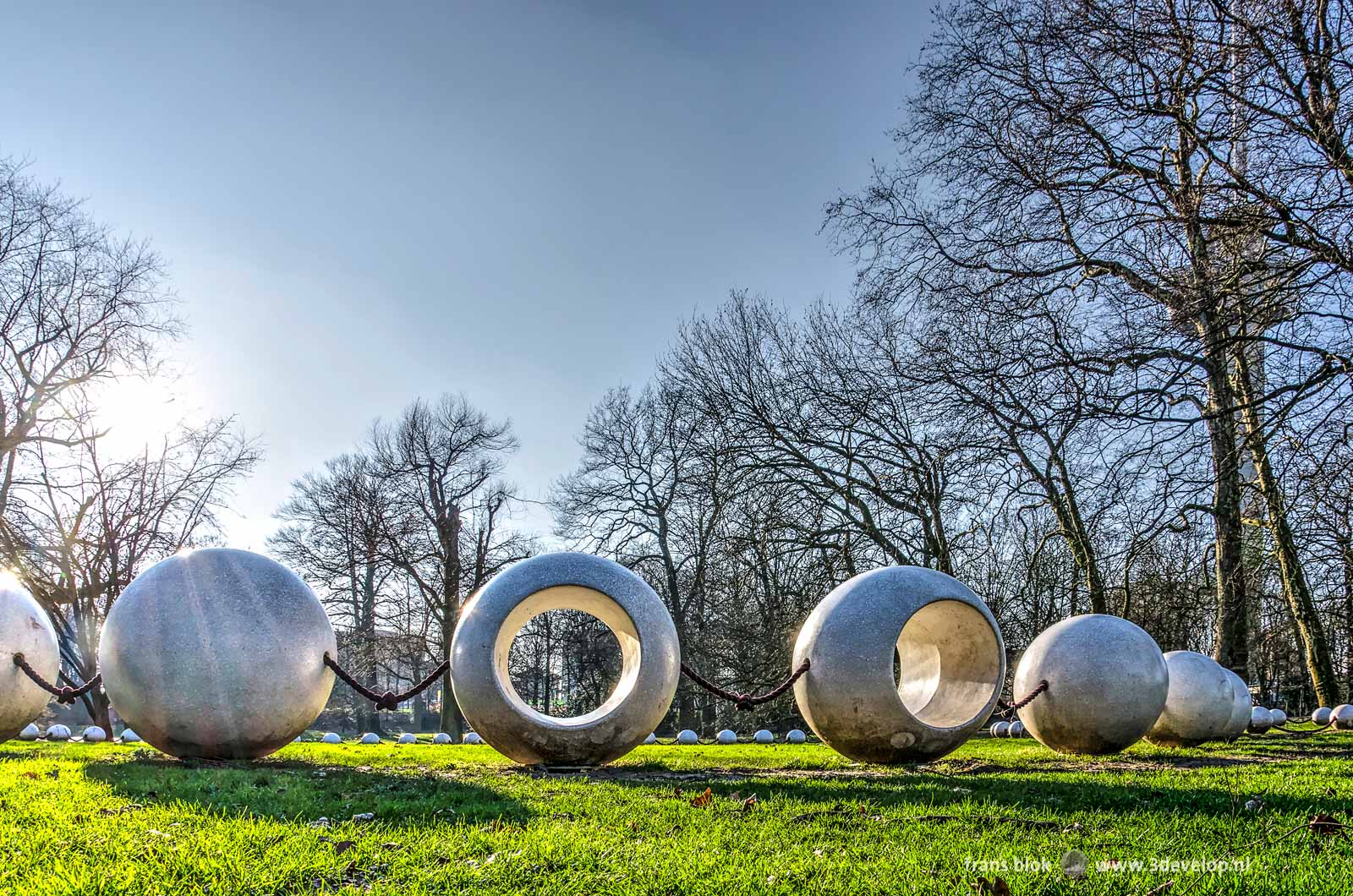 Another artwork that you can walk through. In fact, you can climb over it and even crawl through it. The Lost Pearl is therefore popular with children and that is fine because this pearl necklace was not only intended as a work of art but also as a playing object.

The natural stone spheres connected with ship’s rope can be seen from almost the entire park because they contrast well with the green of the grass and (in summer) the trees. They have a kind of naturalness, as if they have always been there, rather than since only a few years. As if a giantess long ago lost her necklace. Which reminds me of the legend that a giant is buried under the nearby Euromast. 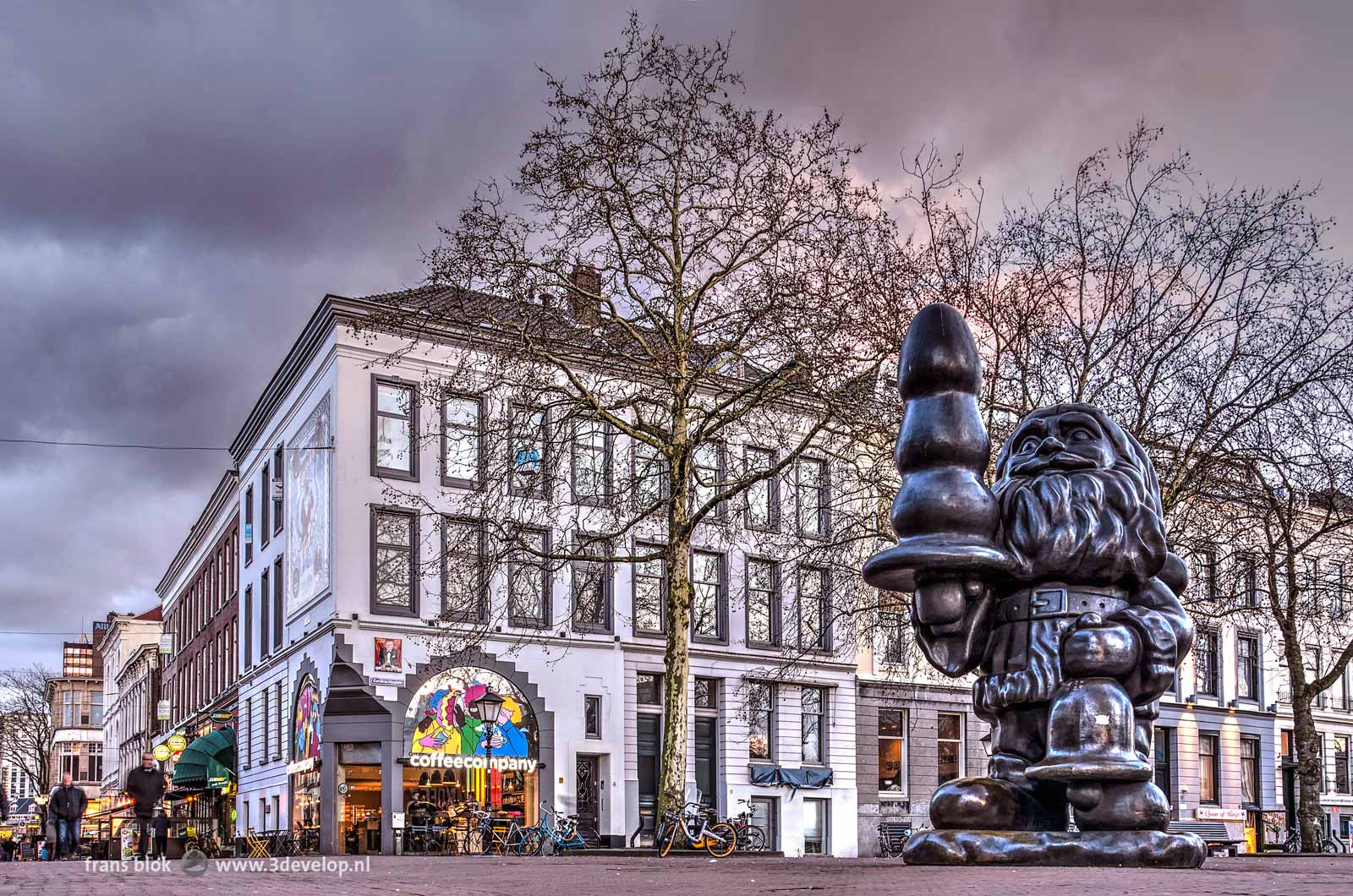 This giant bronze gnome deserves a place in the top 10 if only for the story that can be told about him. He is actually called Santa Claus and the object he has in his right hand is a Christmas tree. But when someone with a depraved mind said it was a sex toy, all hell broke loose. How do you explain that to your children? Well, maybe by telling them it’s a rocket ice cream.

Plans to place gnome Claus near De Doelen concert hall or at Koopgoot shopping mall were cancelled after protests from local residents and shopkeepers. Out of despair, it was then decided to place the sculpture in the courtyard of Museum Boymans for the time being.

But then the change came: the entrepreneurs of Oude Binnenweg started lobbying to get Santa to Eendrachtsplein. And that has been a great success since 2008: it’s the statue that every tourist visiting the city wants to make a selfie with. Kind of what Manneken Pis is for Brussels, just a lot bigger. 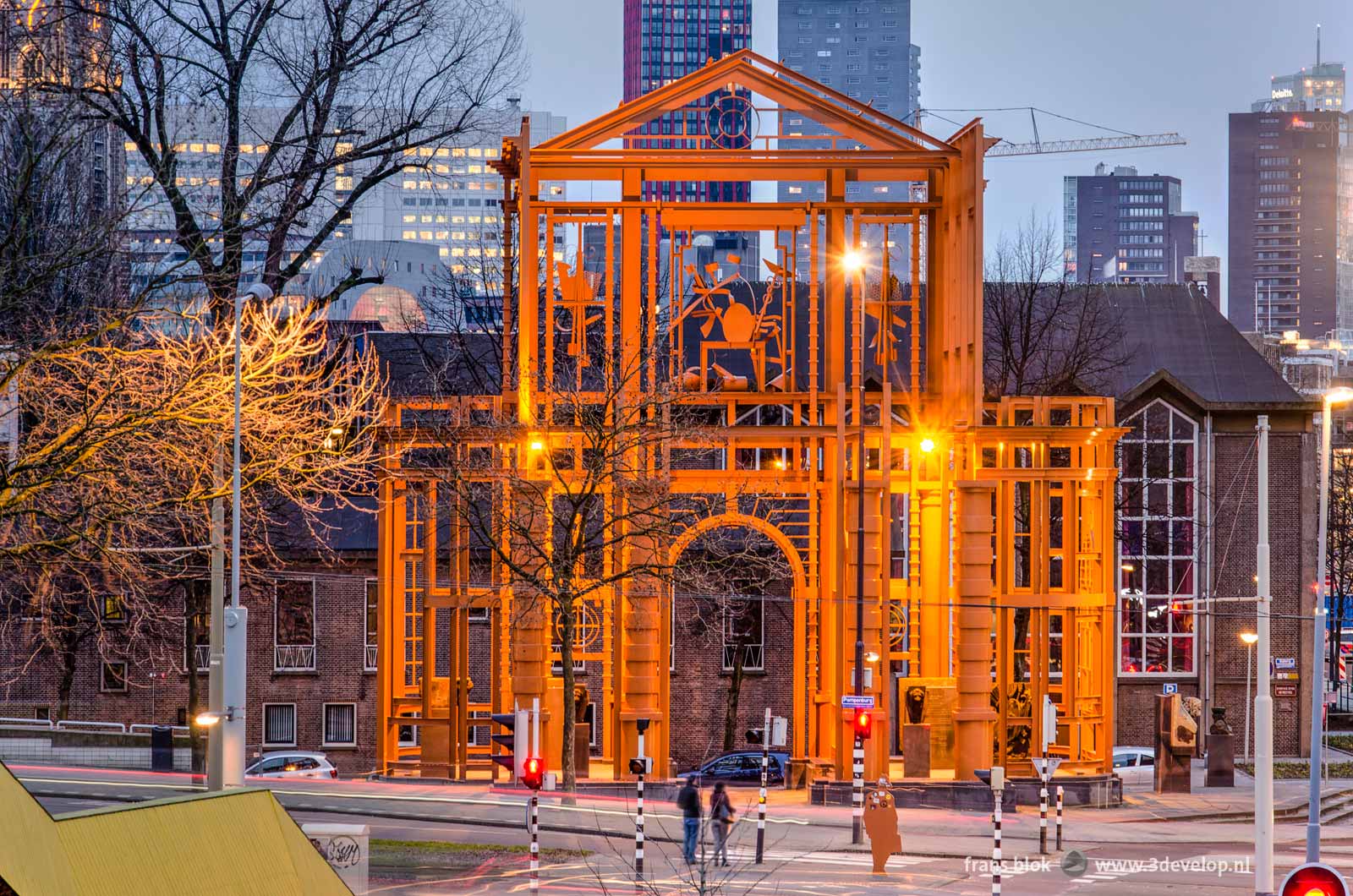 This orange-brown steel construction was unveiled in 1995 on the occasion of fifty years of post-war reconstruction. Inside the structure are a number of lions and other decorations from the original gate that stood on Hofplein until 1940.

It is stated on a plaque that the gate was destroyed during the bombing on May 14 of that year, but in reality the monument had already been largely demolished when the bombs fell, because of a redevelopment of the traffic junction. It was the intention to rebuild the gate somewhere else on Hofplein, but that never happened. Until Cor Kraat made this steel replica in 1995.

The old gate was not exactly on this spot but on the other side of the Pompenburg, near the (former) Shell Tower. 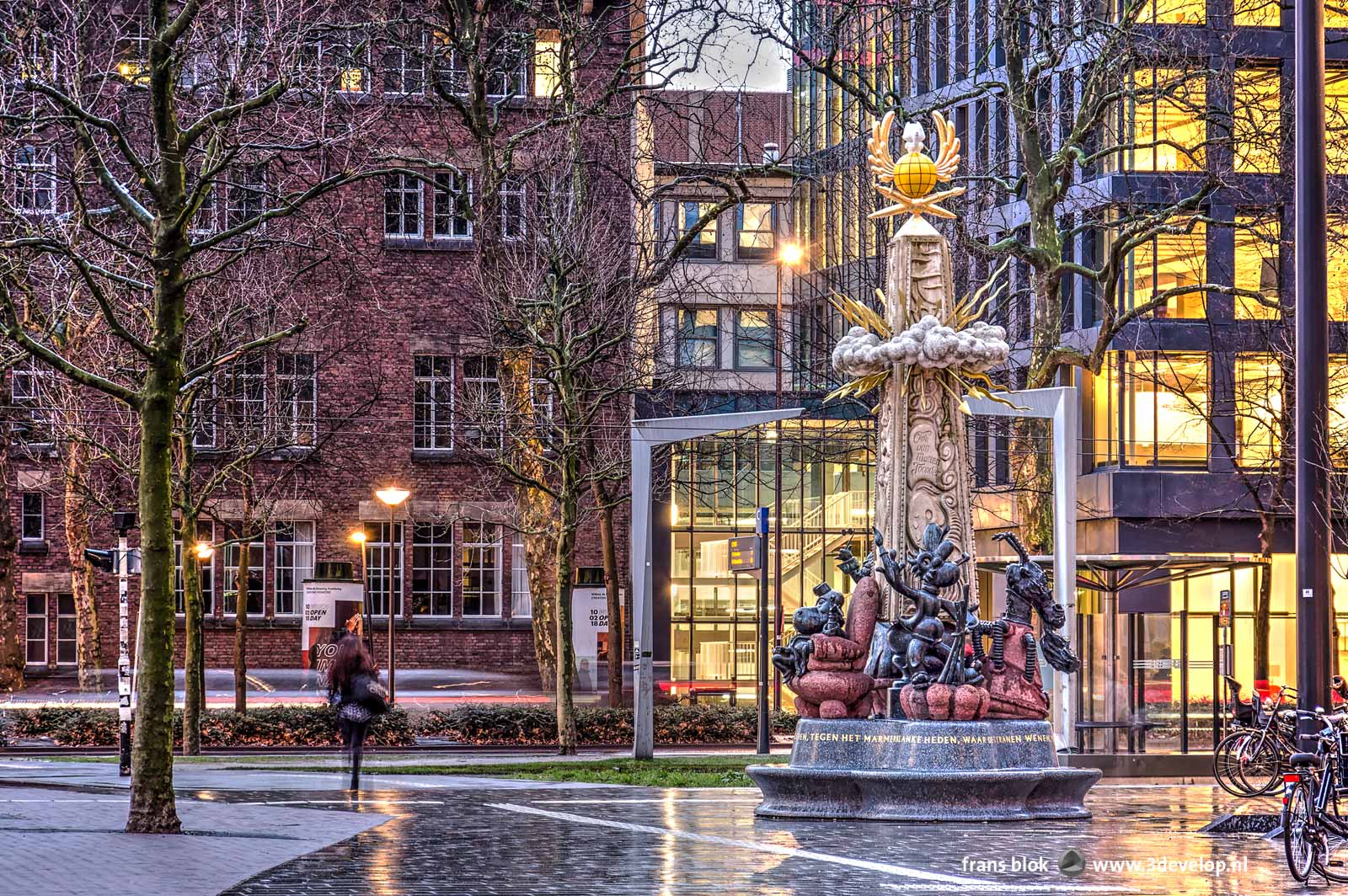 Marten Toonder (1912 – 2005), the Netherlands most renowned cartoonist, lived in Ireland for much of his life, but he was born in Rotterdam and he spent the first decades of his life there. That should be reason enough to dedicate a statue to him and his work. However in Den Bommel, a little village down south, where there was already a Toonder monument, they didn’t like that idea.

Toonder’s most famous character, Ollie B. Bommel is the big absentee on this image, because of that conflict with Den Bommel. Instead we see four other notorious inhabitants of cartoon city Rommeldam on the baroque stone bench: mayor Dickerdack, marquis De Cantecler, professor Sickbock and painter Terpen Tijn. At the very top of the obelisk is a fifth character: Tom Poes. The statue has been on this spot since the 90th anniversary of Toonder, apart from a number of years that it was stored elsewhere because of the refurbishment of Binnenrotte square. 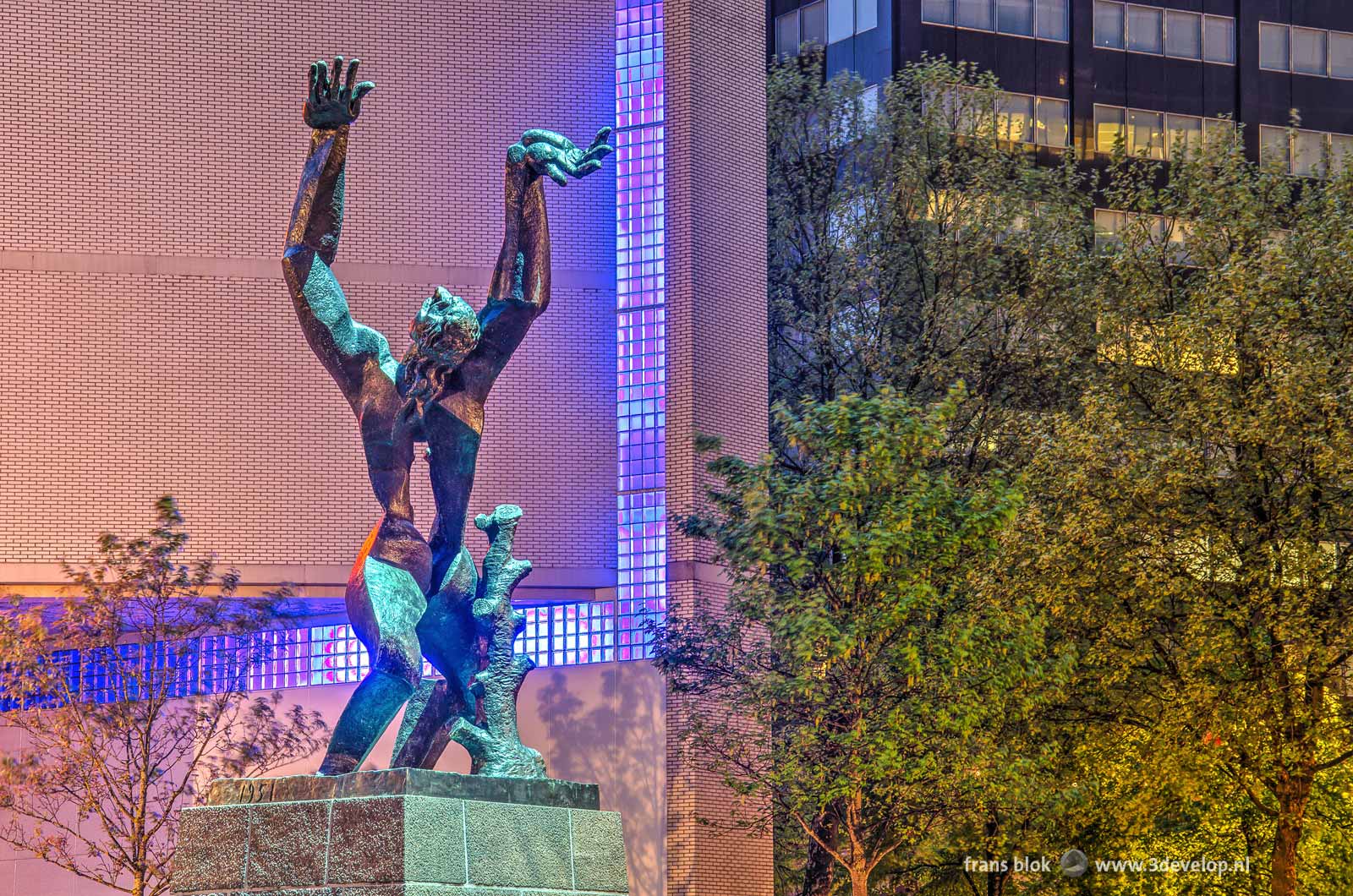 If there is one work that needs to be on this list, it is this war memorial by Zadkine. Just like the Euromast and the Erasmus Bridge, the image has become a symbol of the entire city.

Zadkine depicts the devastation and despair caused by the bombing of May 14, 1940. I can not walk past it without thinking of that gruesome event. When the statue was unveiled in 1953 it stood on an empty plain; it is gratifying that in the meantime a new city has risen around it.

I have heard from a reliable source that the granite of the pedestal was actually intended for a statue of Hitler. If true, it shows that history has a sense of humour.

This top ten has a number zero. However, at the time of writing this blog, that work is not in Rotterdam but in Woerden: it is the facade sculpture by Hendrik van den Einde, the only remaining part of the old Bijenkorf department store by W.M. Dudok. I wrote this update a few weeks ago.

And for those of you who, after reading this blog post, want to visit the ten sculptures in real life, I made this map.

Did I forget a work of art? Or are there sculptures in this top-10 that don’t belong there,  in your modest opinion? Tell the world in the comments below!