The Rotterdam Staircase – a Stairway to Heaven

The Staircase, Rotterdam’s successful temporary tourist attraction, is taken down, but fortunately we still have the photos. In five weeks time 368.611 people climbed the 180 steps to the top of the structure of wood and scaffolding pipe, an idea of my esteemed former colleague Winy Maas. Allthough it’s likely that in reality there were just a few less, because I went up four times and I was probably counted every time. 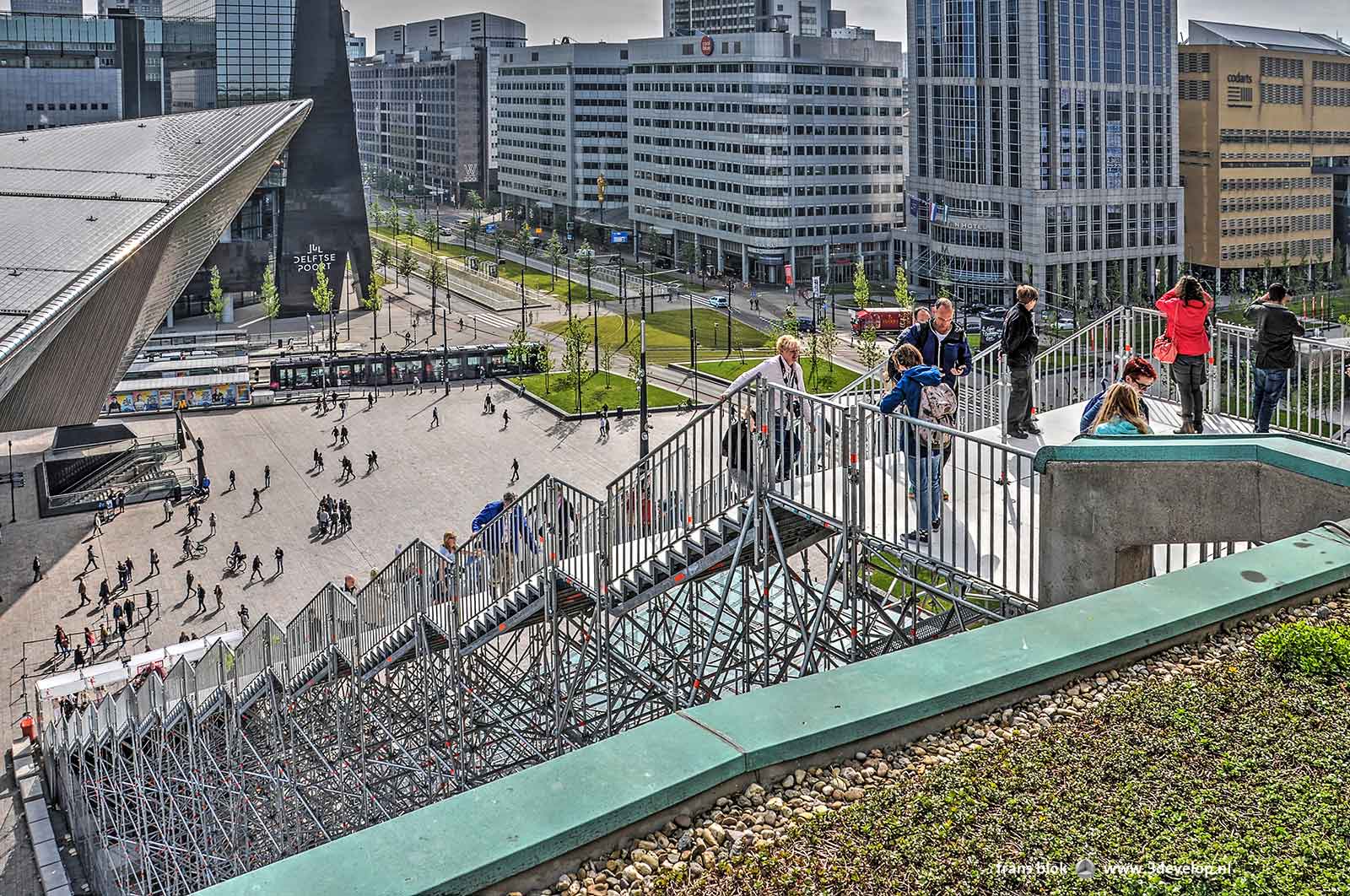 It’s strange: put a staircase and an escalator next to each other and everyone takes the latter, even if the height difference is just a few meters. But build a stairway to the roof of the nine-storey Groothandelsgebouw and it is a challenge that everyone likes to take. I even know a three year old girl who went all the way up on her own little legs. So as a project to make people exercise more, The Staircase has been successful as well. 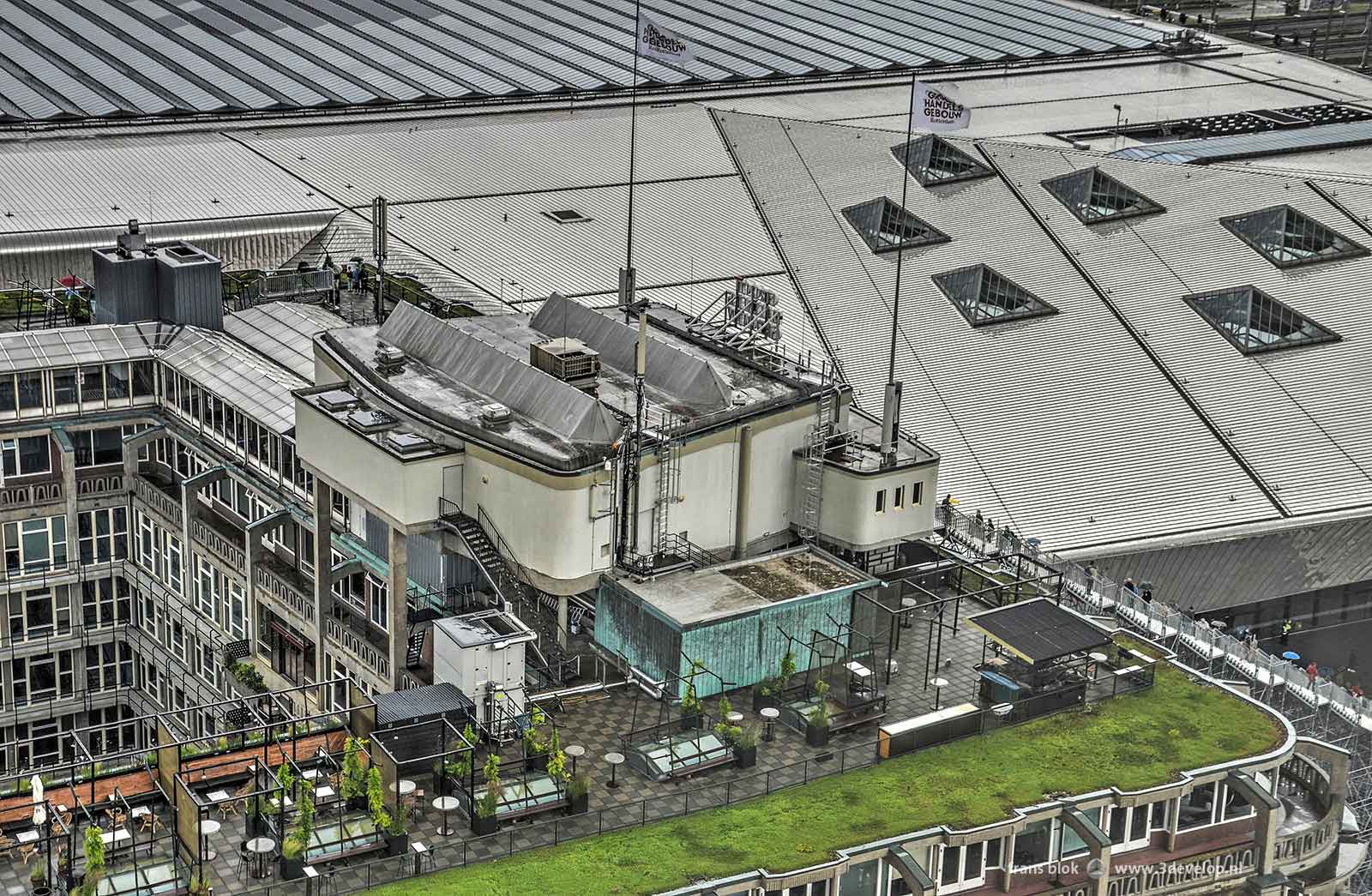 A journalist from De Volkskrant, who came all the way from Amsterdam to see the structure, wrote about the climb as a fraternizing experience, like climbing the Alpe d’Huez. An apt description, because it surely creates a bond, such an common achievement.

And, as often top of a mountain, the view is amazing. The Groothandelsgebouw is not that high, but with its 33 meter it’s high enough to rise above most of the surrounding buildings. 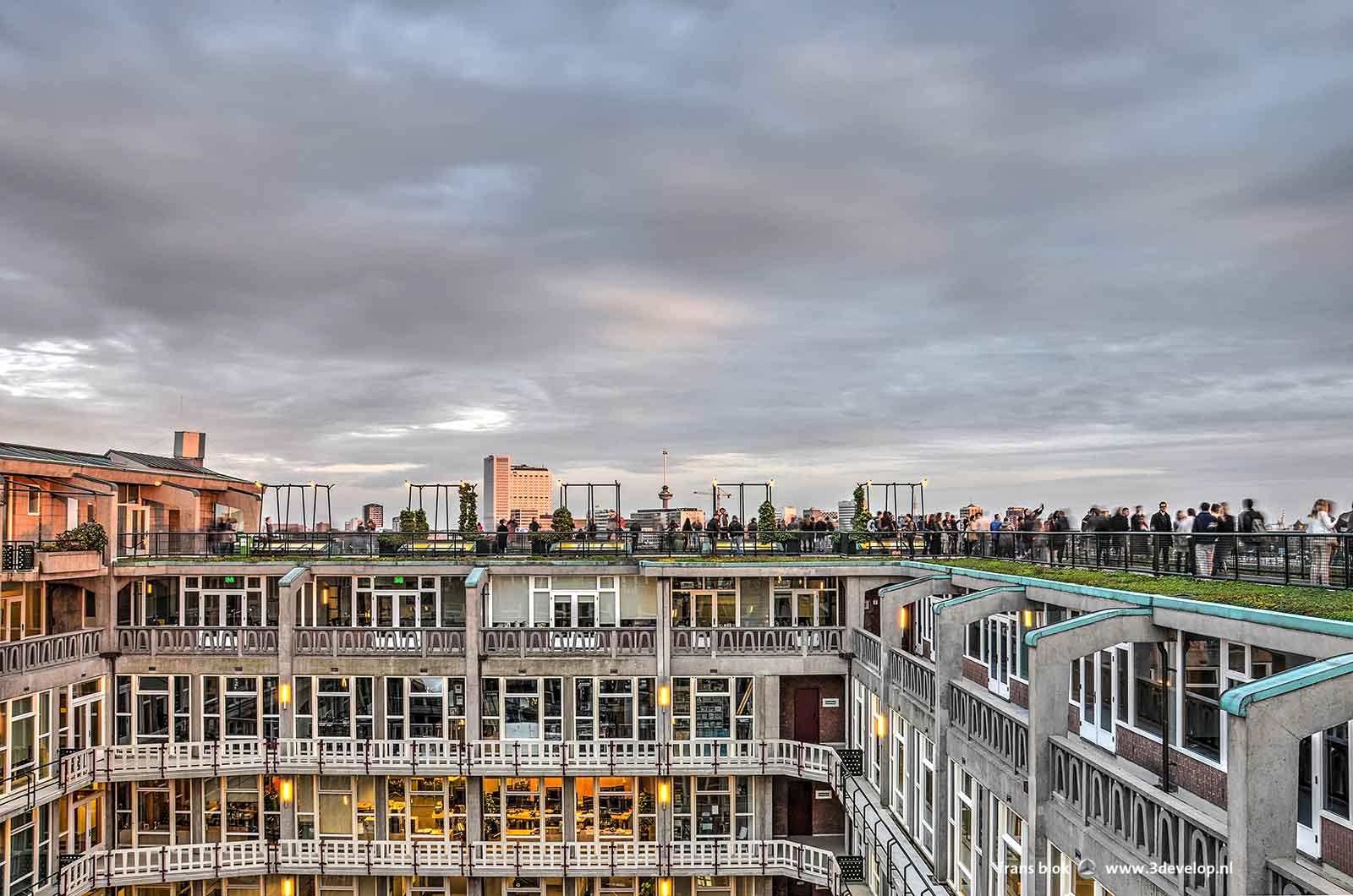 Below we see for example the Old West neighbourhood, and behind it a portion of the Rotterdam skyline including the Euromast and the Erasmus Medical Center. In the foreground there’s the sedum which thrives on the roof, framed by the eaves of patinated copper. 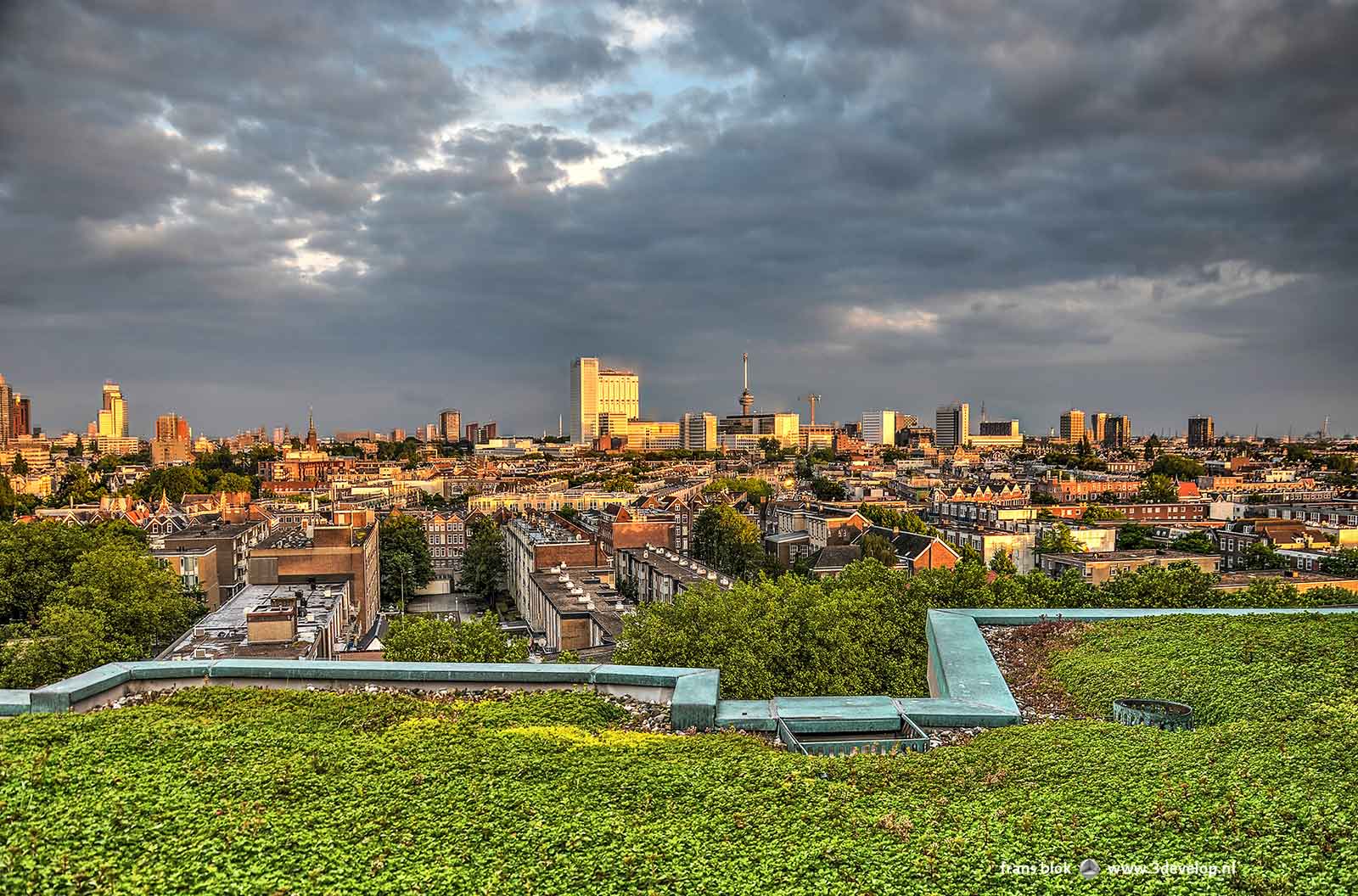 On the north side, attention is particularly drawn by the steel and glass of the new Central Station which, from this angle, looks a bit like a greenhouse in nearby Westland. Behind it the neighborhood of Blijdorp and on the horizon the towers of Zoetermeer, Delft and The Hague. 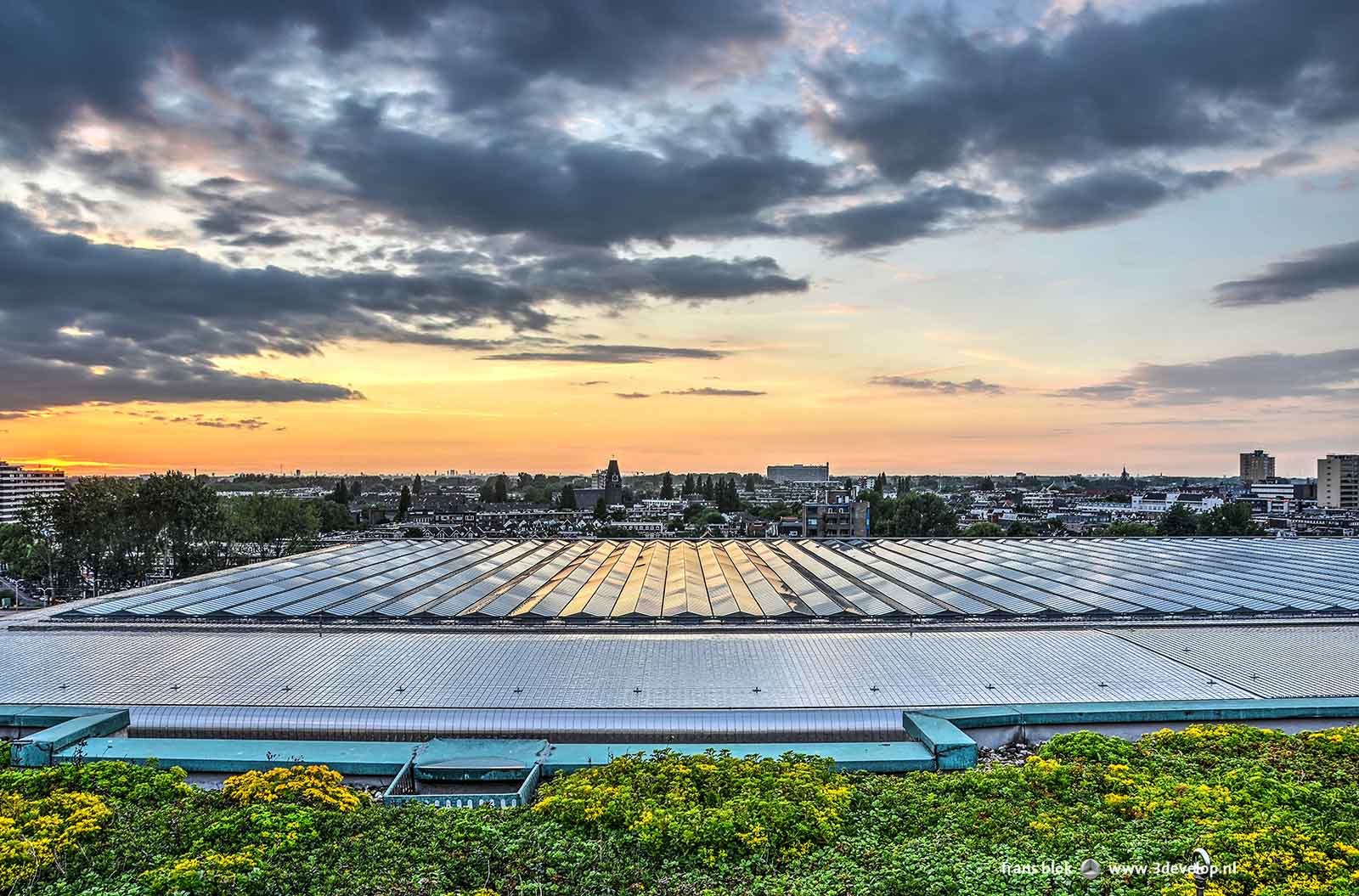 Apart from the view, I’ve also made a lot of pictures of the Groothandelsgebouw itself. After all, the building reached No. 1 on my Reconstruction Top 10. The roof of the building is a world unto itself, a kind of park with plazas, benches, green flower beds, terraces and pavilions. Here the Tweederopbouw, or Second Reconstruction, the occupation of the roofs of Rotterdam, as promoted by Winy Maas, has in fact been completed. 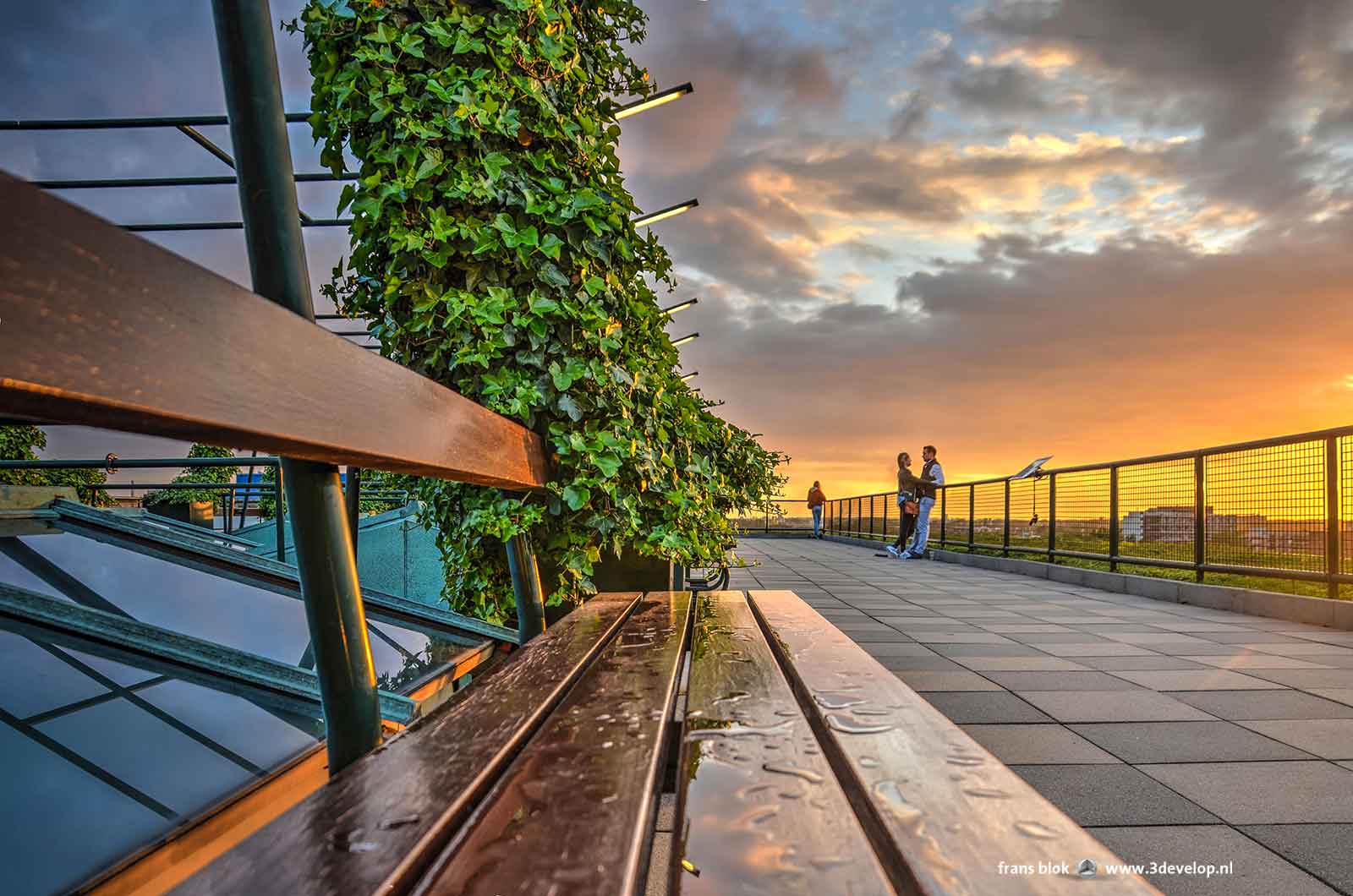 What an amazing building Maaskant has created here in the nineteen fifties. What a wealth of details and how beautiful the restoration of a few years ago worked out. 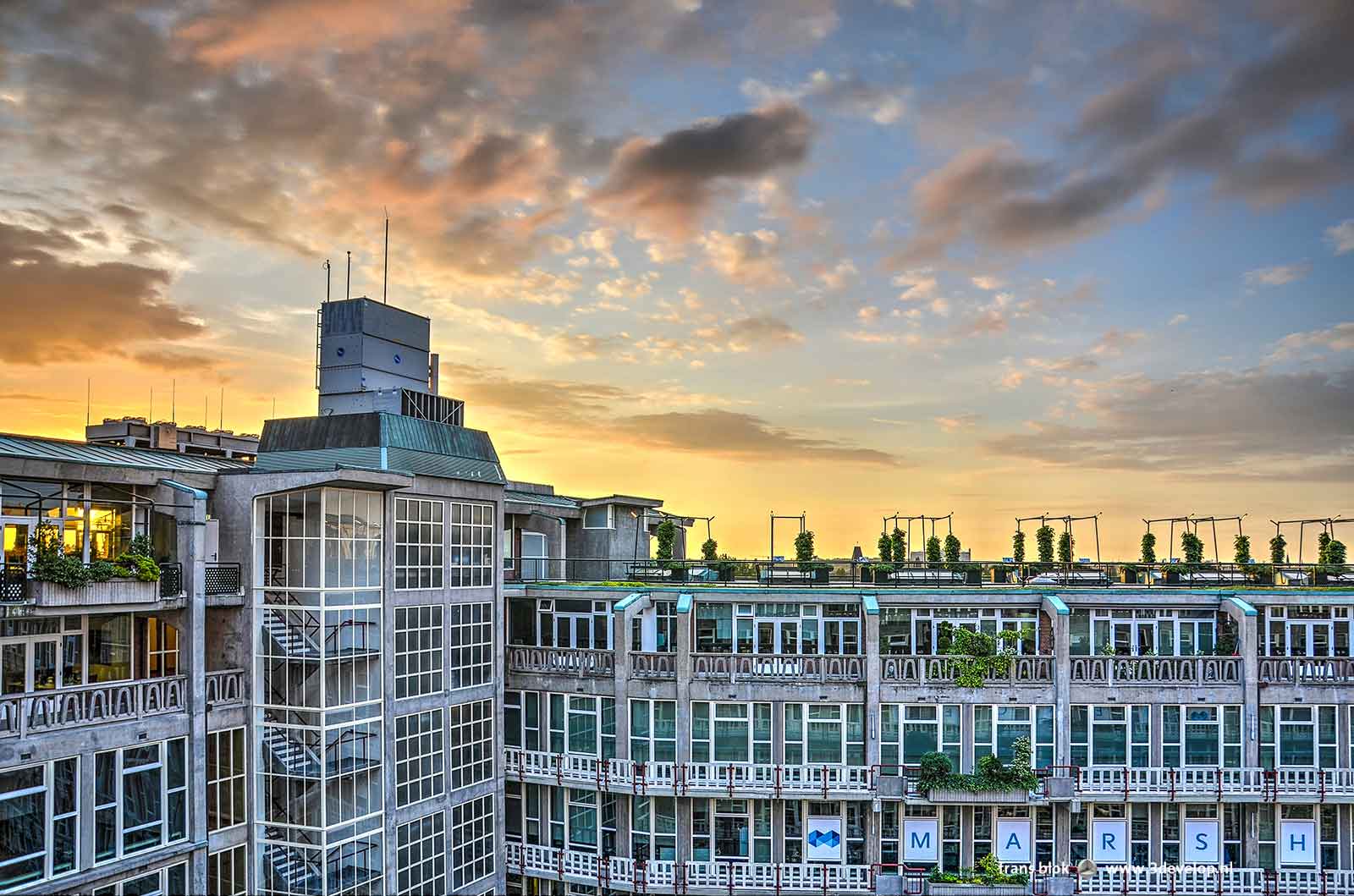 What’s in a name?

And how peculiar, by the way, that so often Rotterdam architects have the river Maas in their name… 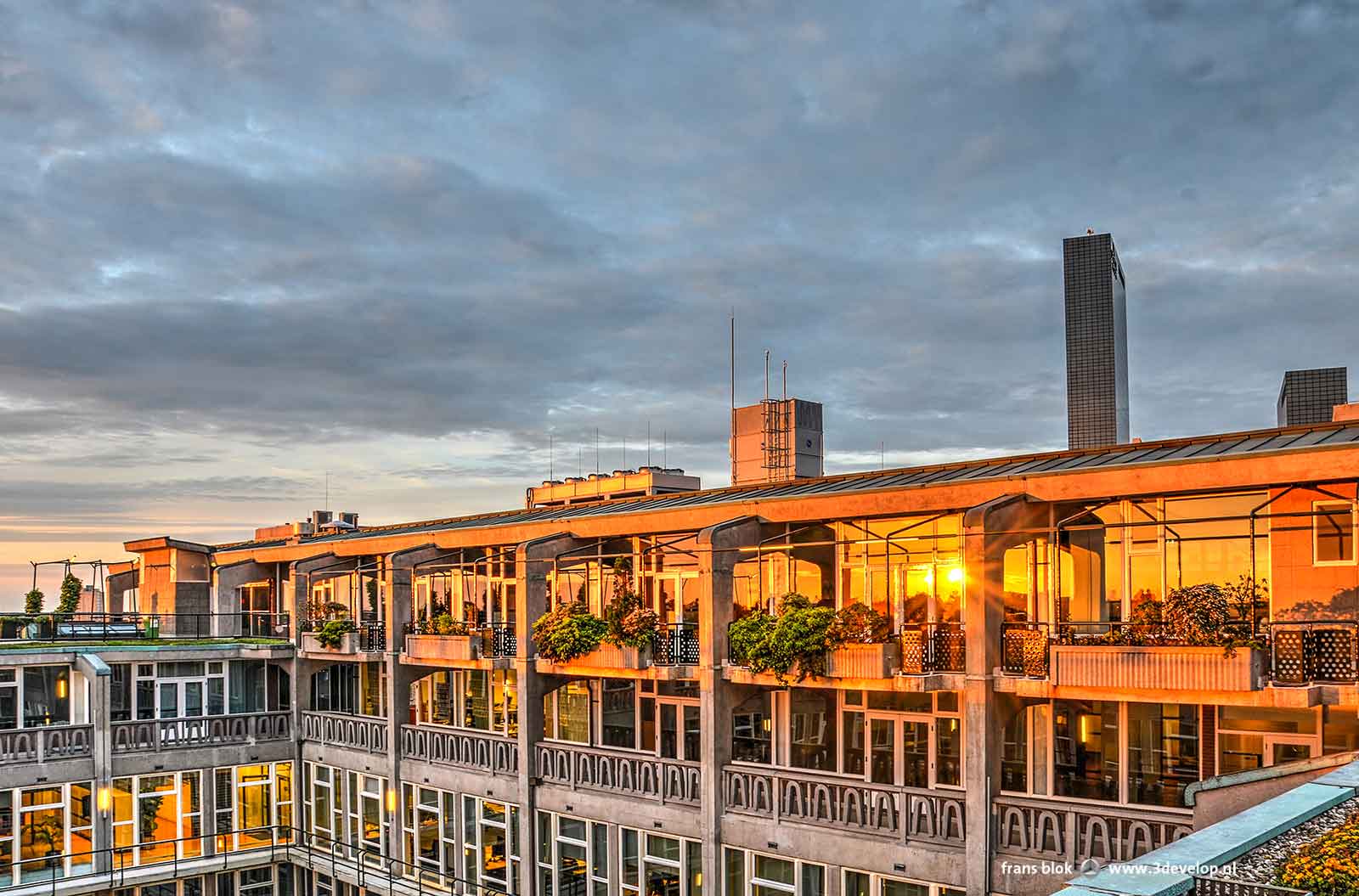 Actually, the roof should always be publicly accessible. Watching the sun set from the Groothandelsgebouw, that’s an experience that every tourist who visits the city should be able to experience. 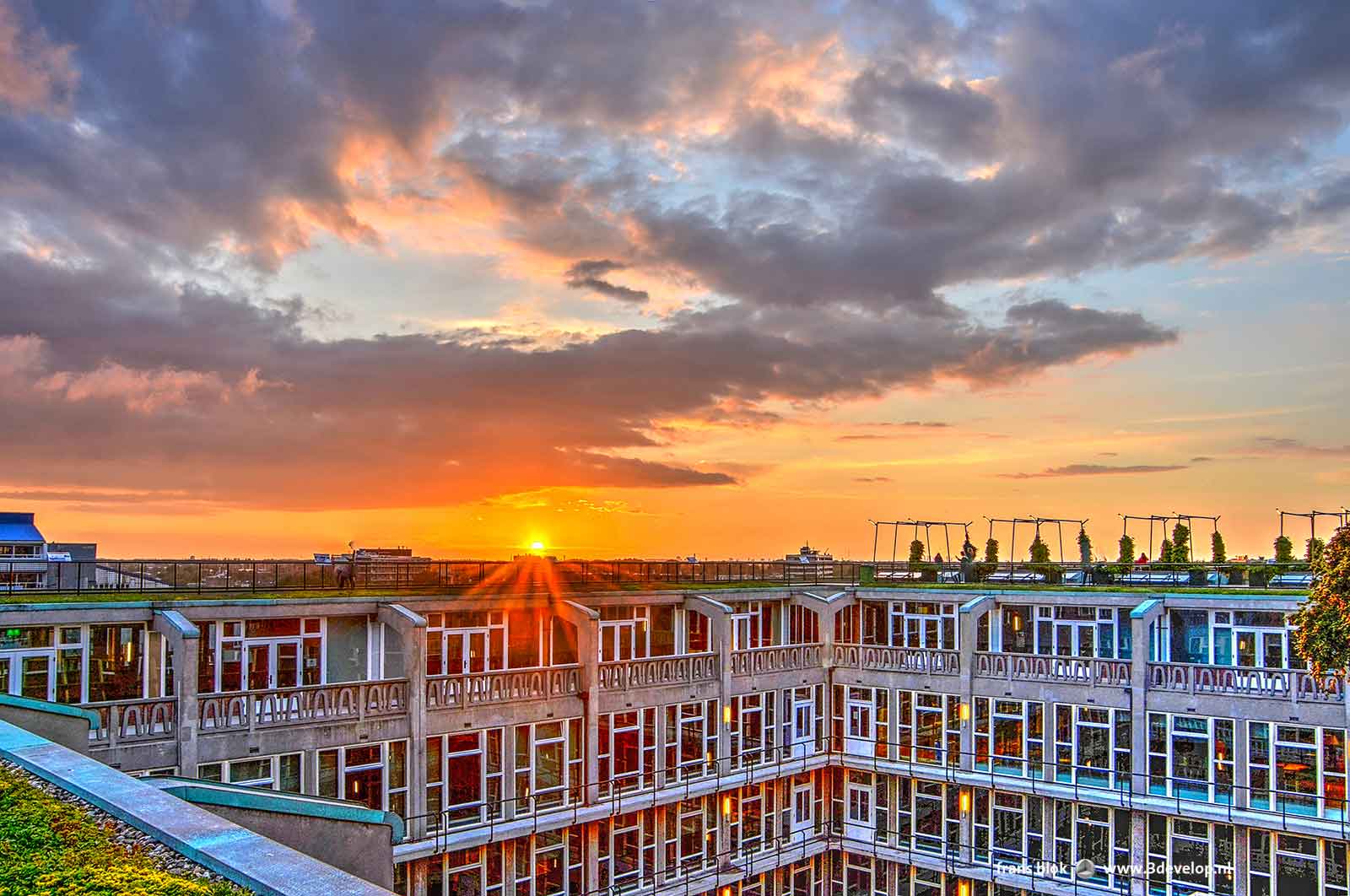 Waiting for the next Staircase

Now that the Staircase is demolished, the scaffolds are re-used on construction sites and the timber of the steps is transformed into benches, we’ll have to wait for the Collection building. That building has also been designed by Winy Maas’ office MVRDV. And it also holds a Staircase with a capital S.