The past one and a half week I’ve been in Watford, England, to provide my services to the design for the re-order of St. Mary’s Church. I previously wrote about this beautiful eight hundred year old church building, built with the typical flintstone that can be seen often in this region:

The church’s interior is beautiful too, but also a bit impractical and not very flexible to use. For some time, there have been plans to make the church more accessible and welcoming. Now it looks like that is finally going to happen. 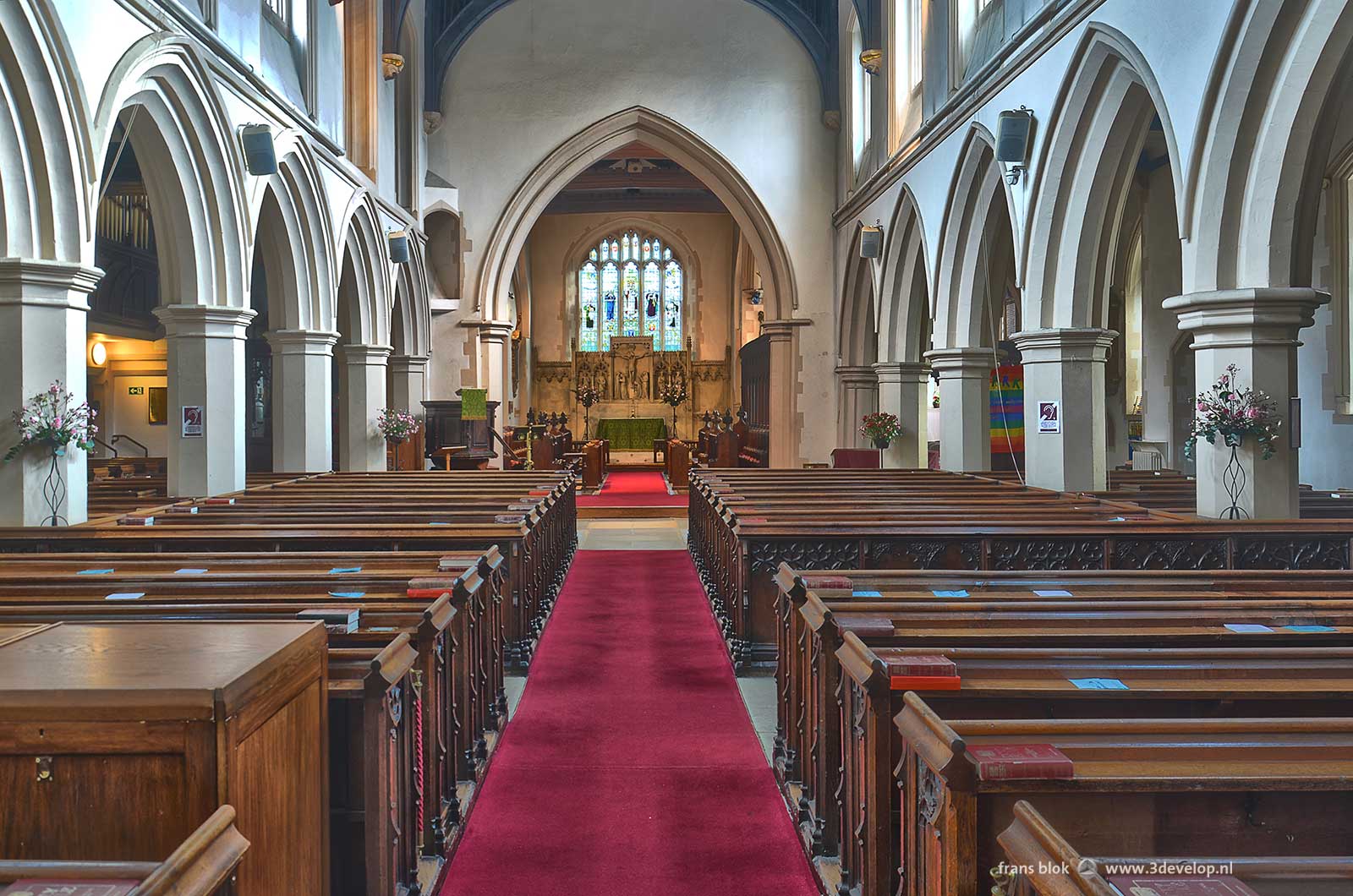 My work was mostly focussed on the chancel area, the zone behind the pulpit. At present this is a charming space with lovely pews, decorated with wood carvings. However the space is never used. The church administration would like to redesign the choir, but that’s is sensitive issue. 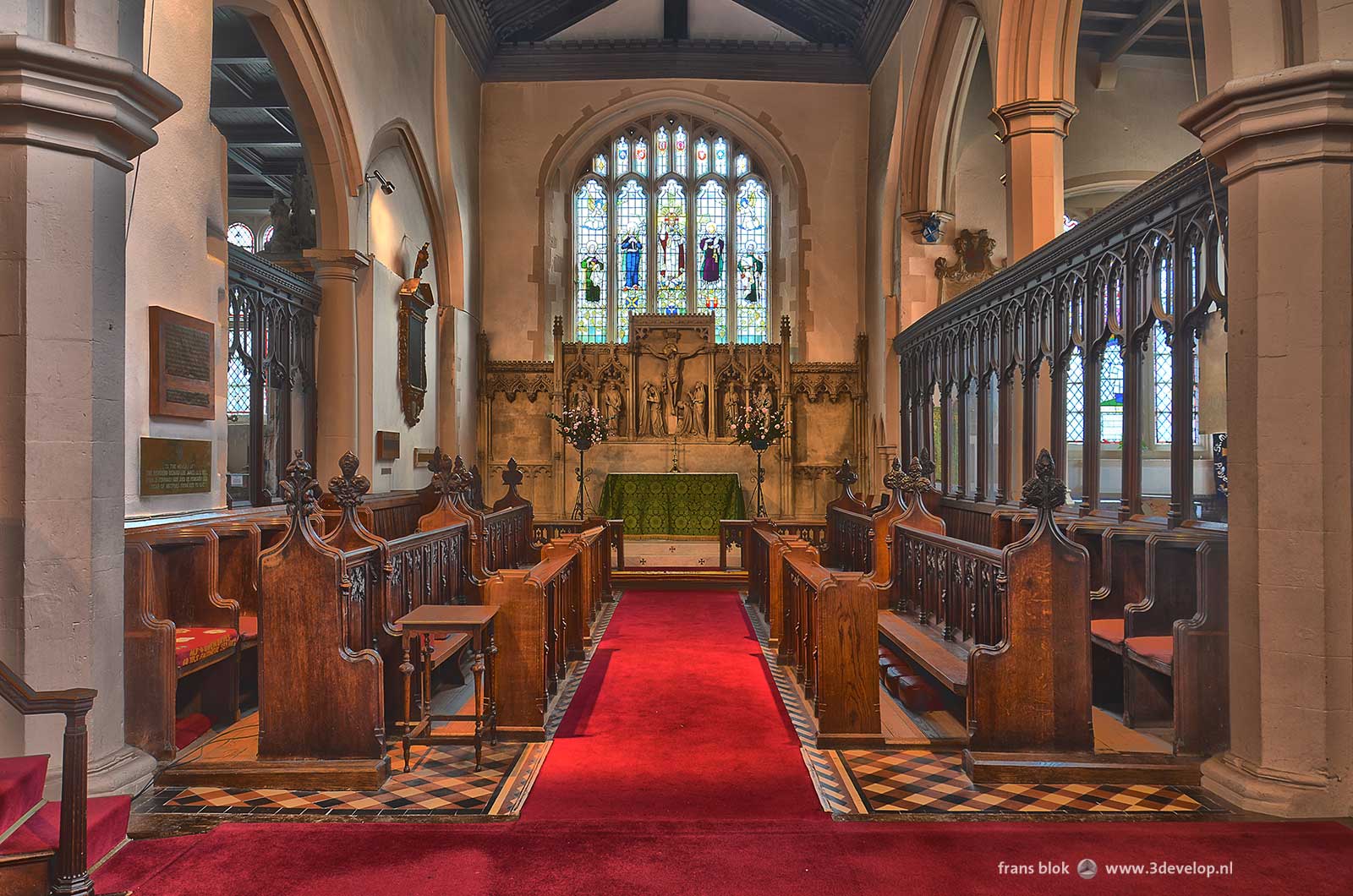 The images I made were primarily intended to show that it is possible to convert the space in such a way that most of the wood carvings can be preserved. Furthermore, the images show that the redesign really produces a more usable space: 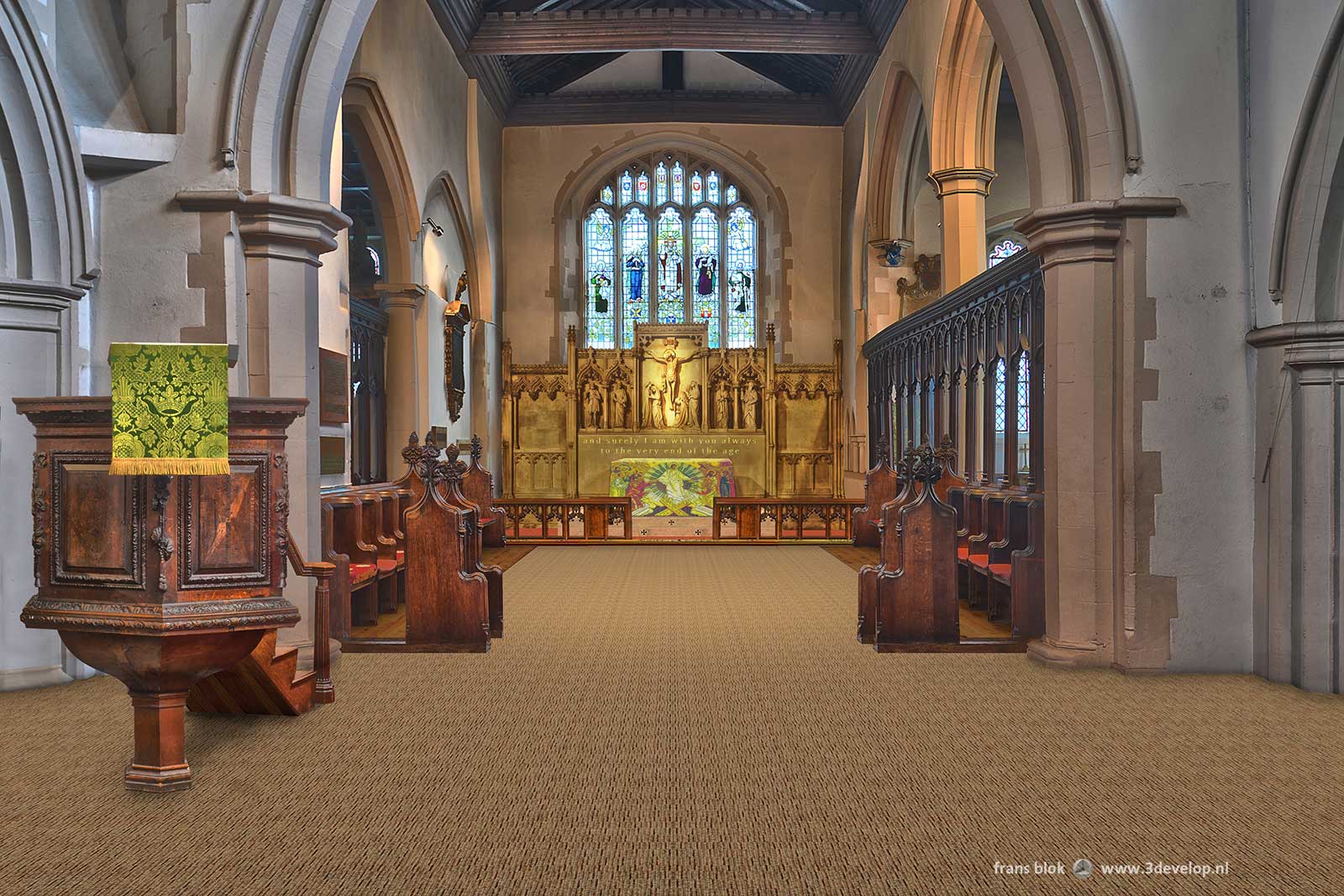 The images are a combination of 2d and 3d. All new elements are 3d modeled but because it is virtually impossible to realisticly model carvings and other artwork, a lot of work went into photoshopping the pictures: 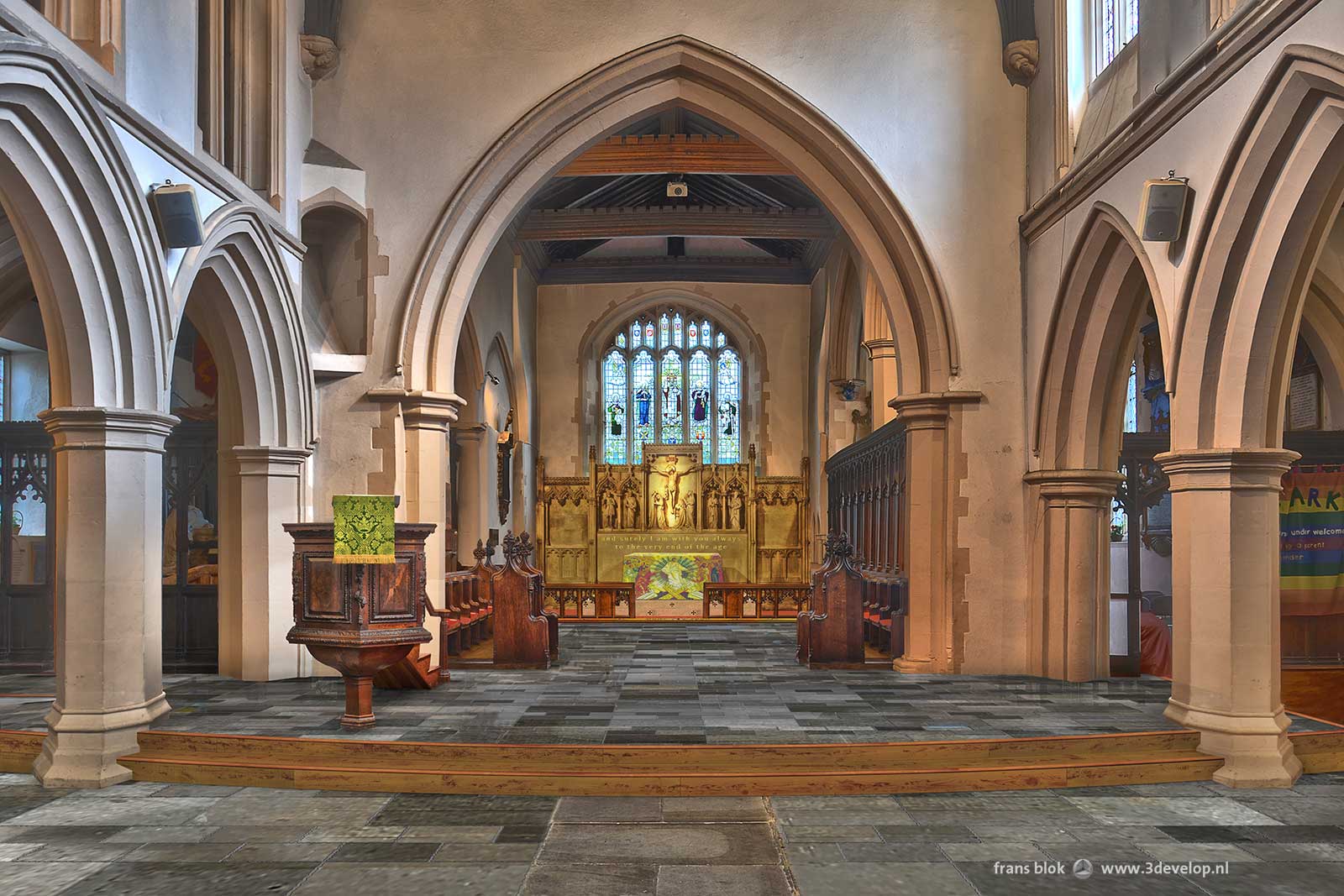 Of course this way of working makes it possible to experiment with different floor coverings which have a very large impact on the mood of the room:

A special point of consideration was the reredos, or the panel showing the crucifixion, at the rear of the church. The initial plan was to lower that piece of artwork in order to make the stained-glass window behind it completely visible. This however appeared to create more problems than it solved, not in the least because the window at the location of the reredos was found to contain just plain glass without illustrations. Therefore a simpler set of interventions was conceived, to give both crucifixion, resurrection and ascension a place in this area: better lighting, a new altar frontal, and an appropriate text from the Gospel of Matthew: 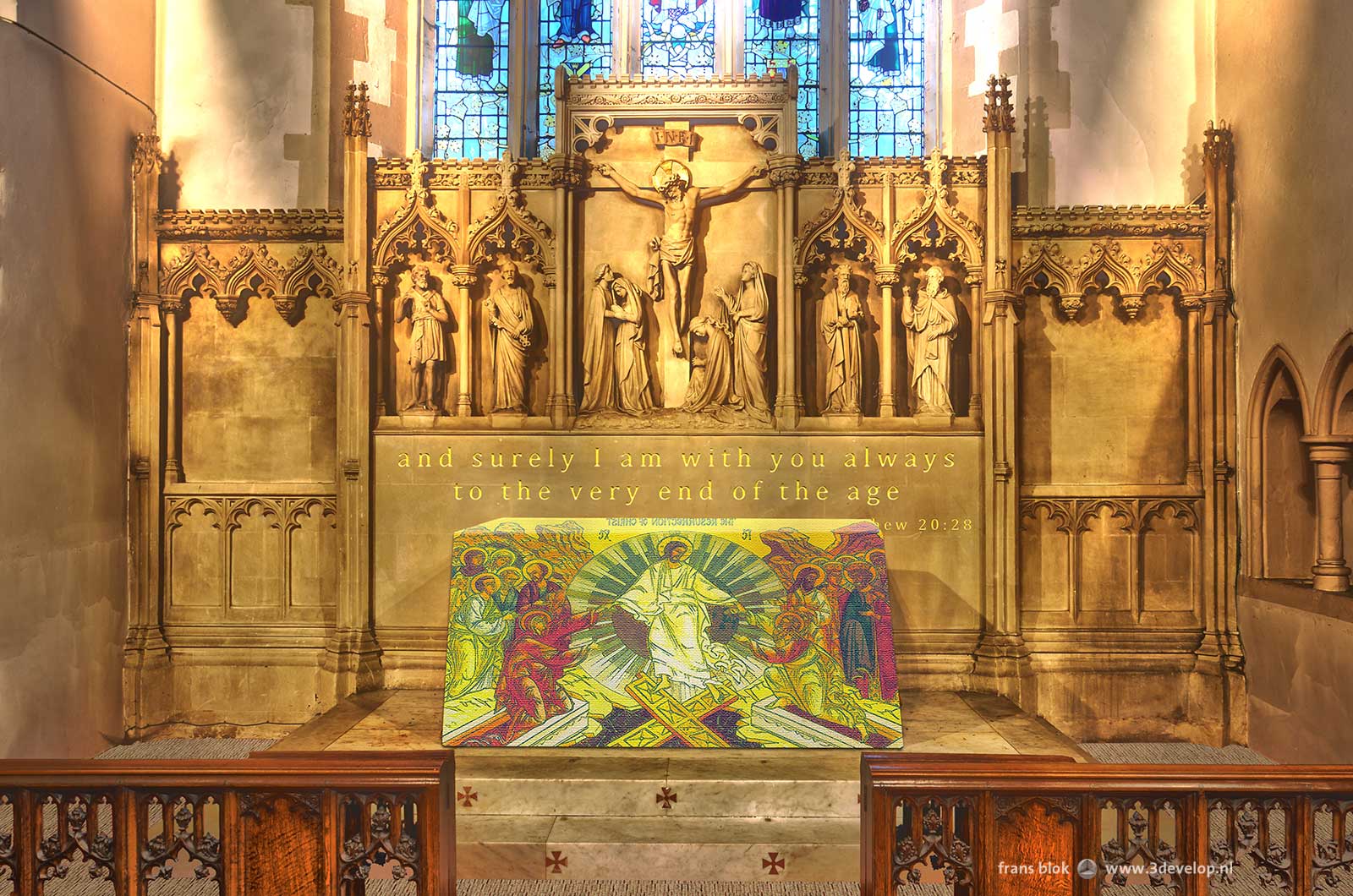 As a next step the design, with the images I made, will be presented to the Diocesan Advisory Committee in March. If that leads to a positive advice, a period of fundraising will follow. I hope and expect that I can come back sometime in 2016 to compare my pictures with the final result.

UPDATE: My images proved to be very useful in the discussions about the design, so a few weeks later the church council asked me to return to Watford to also visualize the proposed changes in the main body of the church.