It was on a bicycle path near the fortified town of Hellevoetsluis that I got a brilliant idea. Or let me rephrase that: just a good idea.

At regular distances, I estimate about a hundred meters, nummers were written on the asphalt with yellow paint. As I got closer to the ramparts, the numbers counted down, until I arrived at 1. I took the following picture of the peeling paint on the rough tarmac, with some clover and withered grass by the side of the path.

That was the beginning of a new photo project, which I refer to as the numbers challenge. The assignment: photograph all numbers from 1 to 100, in order of appearance. 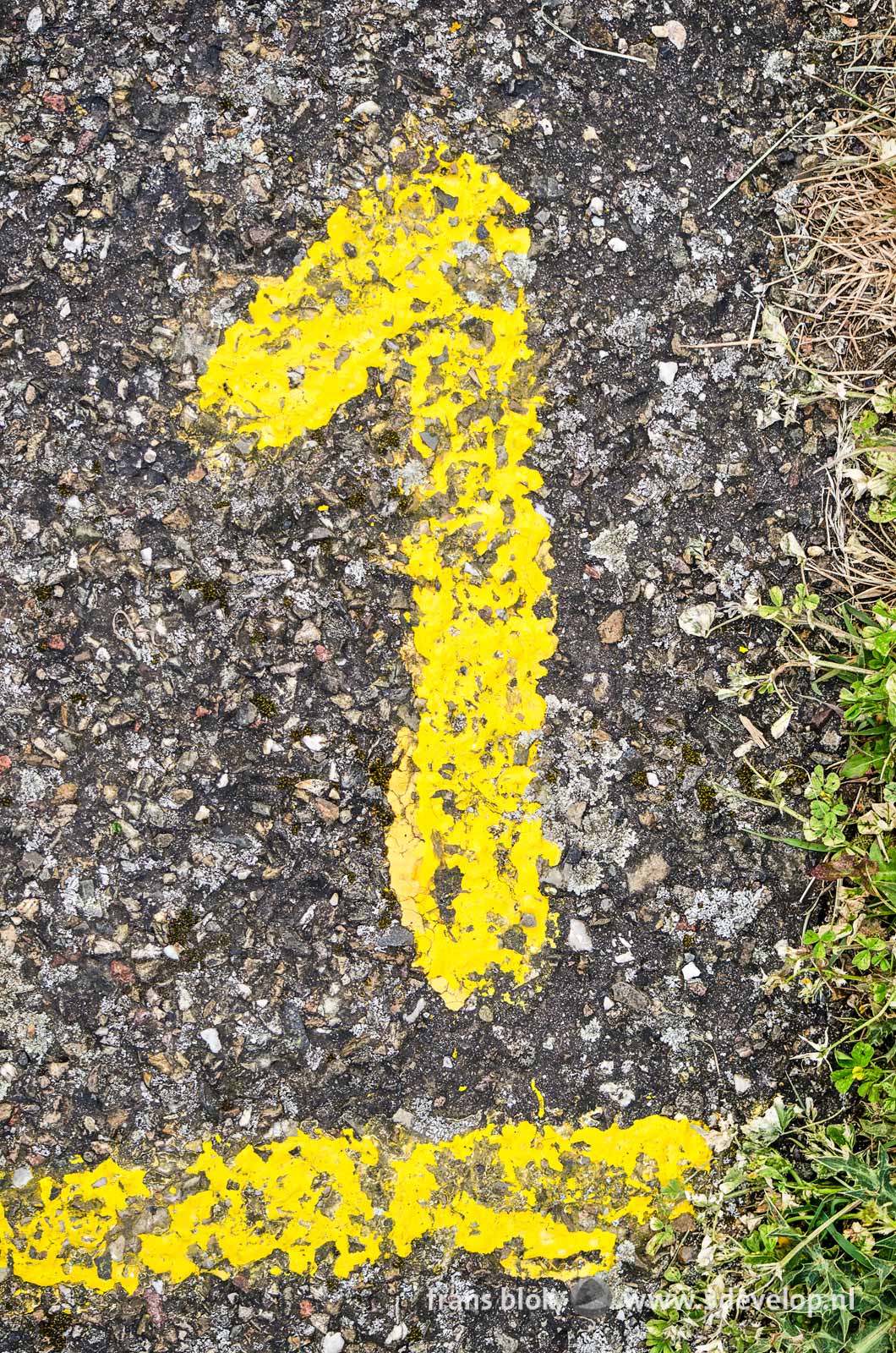 A few months have passed since then and it’s a much bigger challenge than I expected. The modern world is full of numbers; I see them around me all the time when I’m out with my camera, just not the ones i’m looking for.

I often see the digit that I need as part of something bigger: the 2 in 1628. But that is not what I had in mind: they must be stand-alone numbers.

I could, of course, create a schedule from 1 to 100 and then check the numbers that I shoot as soon as I see them. But that would make it too easy, so I work my way from one through hundred in the right order. Here are the first twelve. 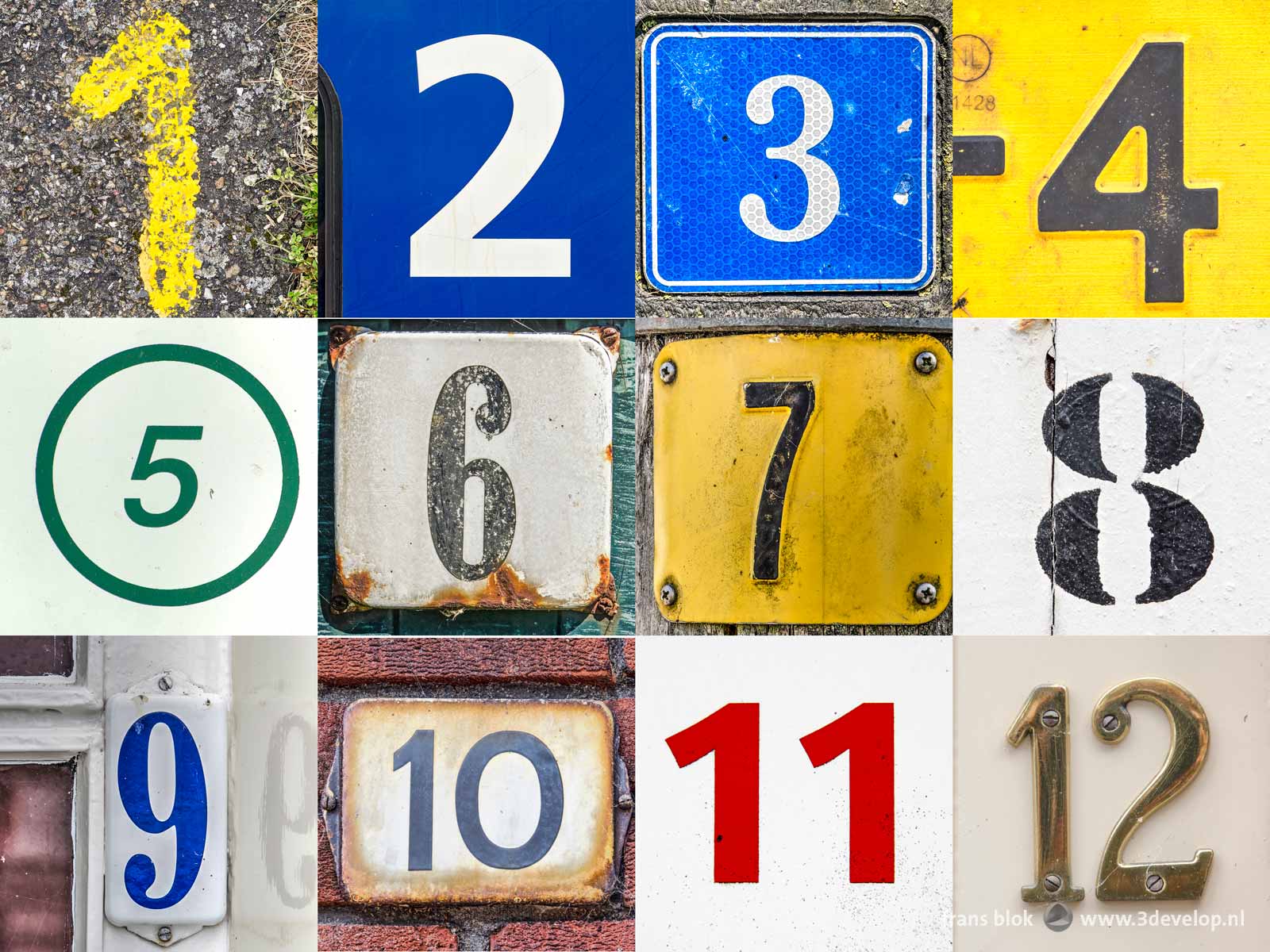 There is of course a shortcut to get to 100 in an easy way: just photographs all house numbers in a street. But I have imposed another restriction: they must be different numbers. I aim for the greatest possible diversity of fonts, colors and uses.

With the first batch, I think I managed to achieve that variety. They include a road surface, a mooring post, a license plate, a train, a traffic sign, a bicycle route number and a scaffolding post. And okay, five house numbers, but very different ones; I strive to further reduce the number of house numbers in the remaining 88.

I conclude this blog post, for the time being, with my number 12: two gold leaf digits, a little crooked, with rusty screws attached to a white lacquered wooden doorpost, with some remnants of cobwebs on them. I’m looking for a pretty number 13 now; I will post updates in the course of time to show the progress.

And of course everyone can join the numbers challenge. Number 100, here we come! 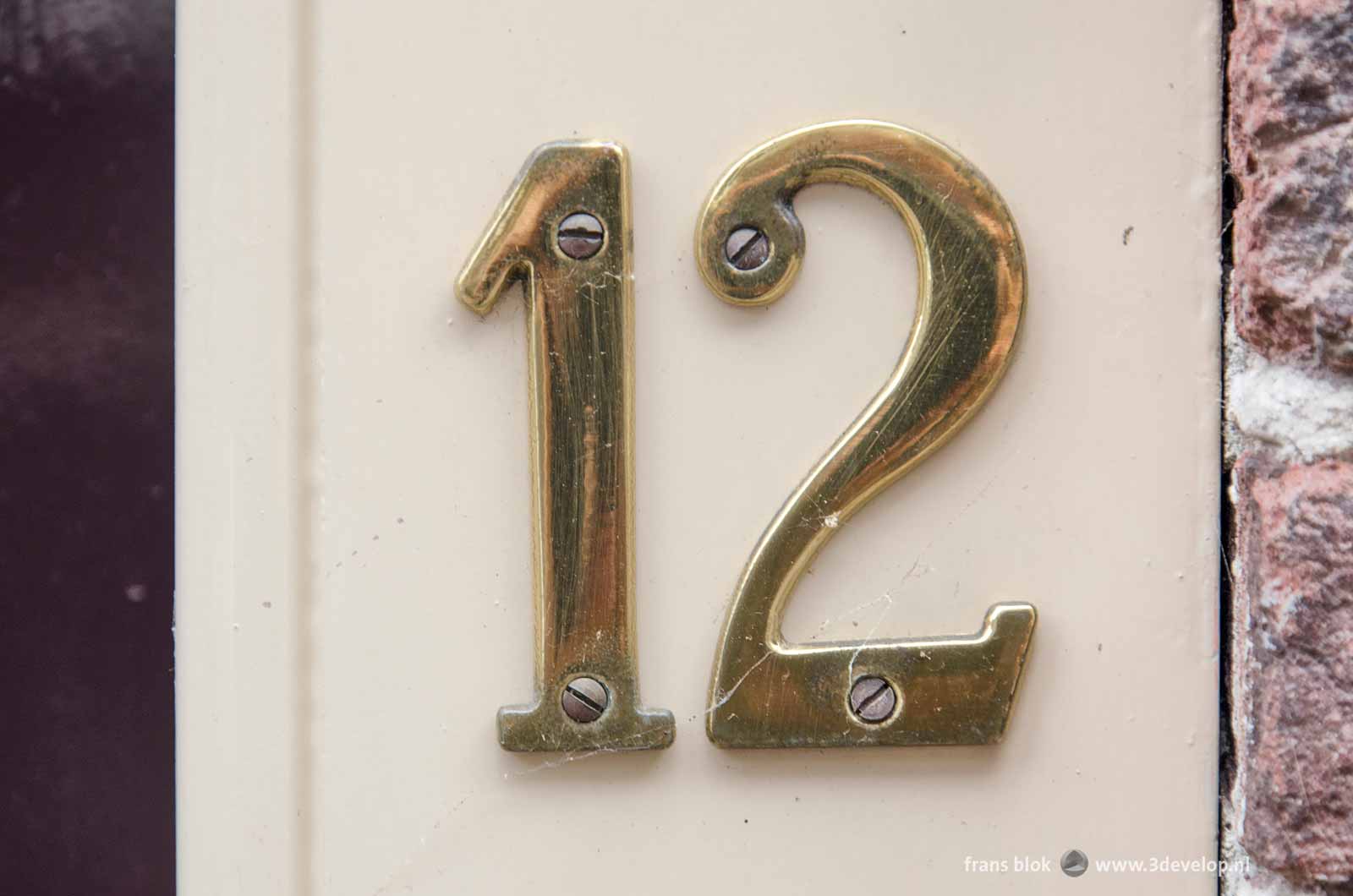 Slowly but surely I am getting closer to 100. After having scored the 29 yesterday, I am now looking for a 30. That can never take long, the 31 will probably be harder.

As I get into the higher numbers, it becomes more difficult to avoid the obvious house numbers. But at least I am looking for house numbers with some originality. And among numbers 13 to 24 there are several other items likeo a bollard, a railway platform, a restaurant billboard, a supermarket advertisement and a building.

It gets harder as the numbers get higher. Most series start at 1 and stop quite soon afterwards. A train has two classes, Rotterdam Central Station has 16 platforms, a day has 24 hours, a month has (maximum) 31 days. Those are not longer useful because by now I’m looking for number 38.

The ultimate goal is a colorful and diverse collage with all numbers from 1 to 100 on a poster. Below we see a preview: no. 1 through 36. On to the next intermediate target, 7 x 7 = 49

After a little bit over a year I am halfway through the challenge. Recently it seems to be going faster than before; I work a bit harder than before but also get a lot of help from people around me. I am particularly indebted to travel companions A., A. and I.

I’m still often tempted to cling to the omnipresent house numbers, but I still manage to resist that temptation most of the times. The last ten included an advertising poster (40), a T-shirt (42), a restaurant table (43), a locker (44), a bicycle shed (45), a lamppost (47) and a ship (48). And okay, also three house numbers.

And one again a milestone has been achieved number 64. Since this number is a square it’s possible to fit all spotted numbers in a grid of 8 by 8. Still one stop to go: the 81. And, of course, the ultimate goal of the challenge: the 100.

Of course I could simply continue, onwards to 200. However, I’m afraid that, within the set rules of the game, it will become increasingly difficult to collect the numbers in the correct order. Even house numbers are getting scarce as the numbers get higher. It could easily take five years to get the second hundred and maybe even a decade for numbers 201 to 300.

No, I think I’ll leave it at this. As far as I’m concerned, the numbers challenge is complete with this colorful 10×10 grid. But I will certainly continue to photograph numbers: year stones for example, or the number 42. Or simply: numbers in which a beautiful graphic design and some influences of the ravages of time collaborated to create something photogenic. I may write a follow-up blog about it.