One of the most bizarre conspiracy theories has to be that of the Flat Earth. There is even a society with hundreds of members who gather at conventions to discuss the “evidence” that NASA and other agencies, with malicious intentions or out of ignorance, maintain the idea that our planet is a sphere orbiting the Sun. But the mere fact that it is not day or night everywhere at the same time suggests that the Earth is not flat. When the sun is shining in Europe, it should be visible from New Zealand as well, on a flat Earth. Even… Read More 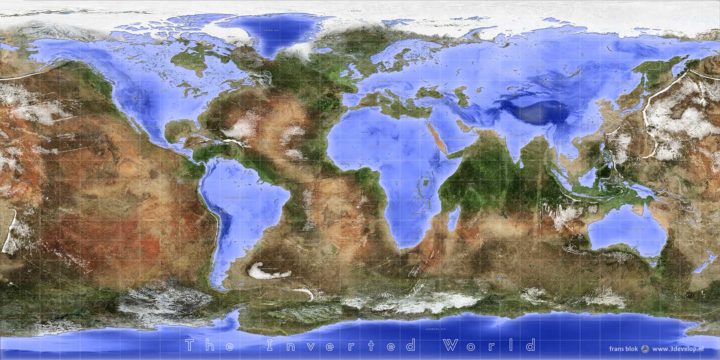 The Inverted World Map – Variations on a Blue Marble

It probably happens to everyone who likes to look at maps. You imagine land to be water and water to be land. Continents to be oceans and and oceans to be continents. Islands to be lakes and lakes to be islands. I could not resist the temptation to make a detailed map of such a topsy-turvy world. But I am not the first to do so. A little bit of googling yields a nice collection of inverted maps. Vladislav Gerasimov, for example, made a lovely styled fantasy map. And Chris Wajan on his Panetocopia website extensively discusses climate, vegetation and… Read More